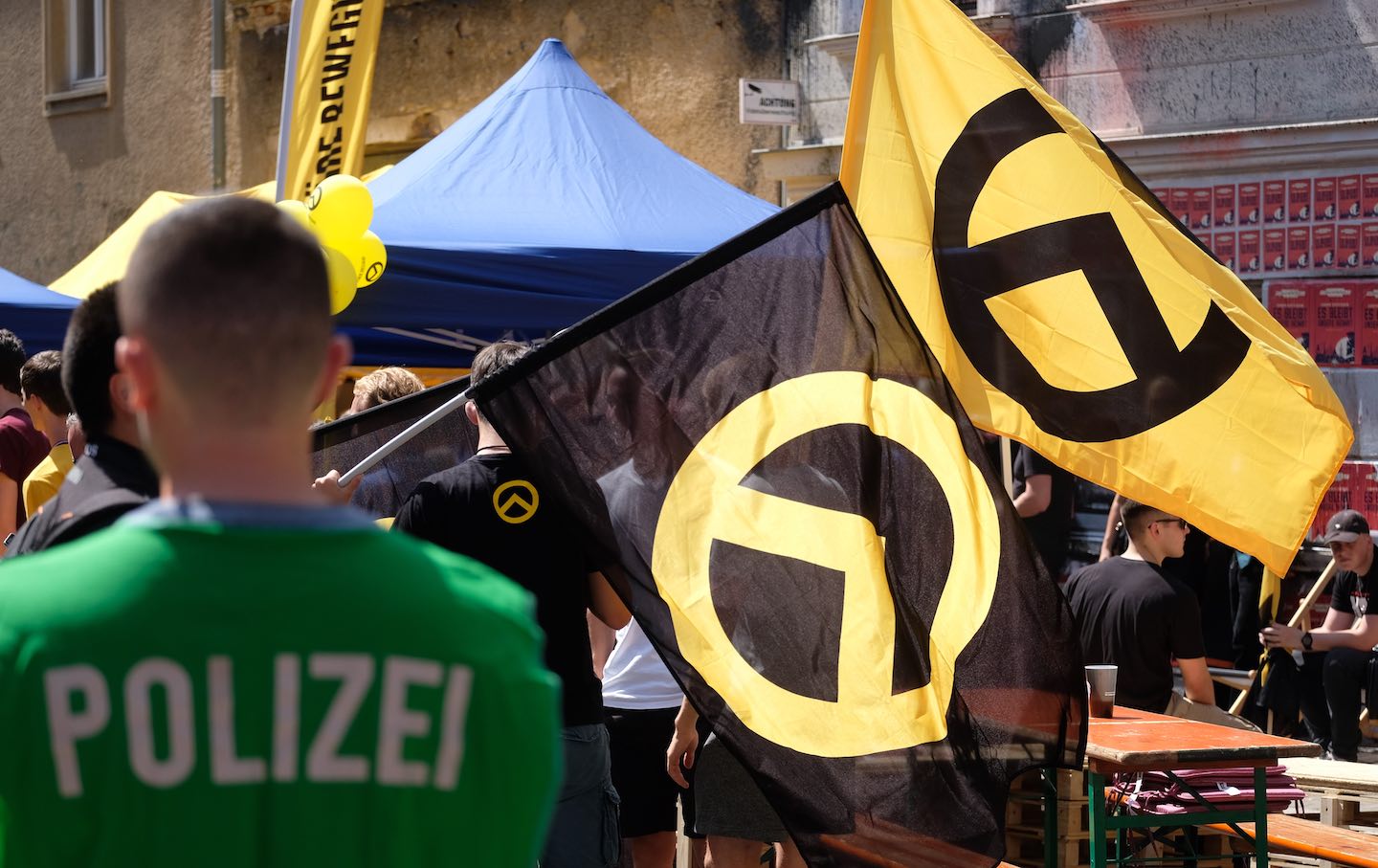 The Identitarian movement hosts a summer party outside their house in Halle, July 2019. (Sebastian Willnow/Getty)

Halfway through the public lecture that Dr. Daniel Wutti had spent weeks organizing at Klagenfurt University in rural Austria in 2017, 15 male protesters burst through the doors. Some were dressed as stereotypical Muslim women in black niqabs. One man was wearing traditional Austrian lederhosen, and as the “women” unfurled large banners reading “Stop immigration” and “Integration is a lie,” they began throwing stones at him.

“It was confusing at first,” says Wutti, who had organized the lecture on integration to coincide with the launch of an “inclusion buddy” scheme for refugees in the region. “Then people in the audience started shouting, and someone tried to grab a megaphone from the ringleader.” He adds: “I think it was quite obvious what point they were trying to make.”

The stunt, which was organized by the local branch of the far-right Identitarian movement and attracted global media attention, resulted in ringleader Luca Kerbl being found guilty of assault after he punched the university headmaster while leaving the hall. Several refugee students who witnessed the stunt felt traumatized and had to seek therapy, including one from Afghanistan who said it reminded him of the Taliban’s actions at his old university.

The incident was one of the most high-profile examples of a growing issue on campuses around Europe: an increased presence of far-right groups and their activities. “There have always been far-right students at universities, but now it seems they are being emboldened,” says Judith Goetz, a political scientist who has been asked by a number of student bodies in Germany and Austria to run workshops on how to respond to the situation. “Some students, particularly left-wing ones, are very afraid. They worry what will happen if they know their addresses and personal information.” And with free speech on campus a hotly debated topic lately, handling extremism has become a tricky subject for university staff. 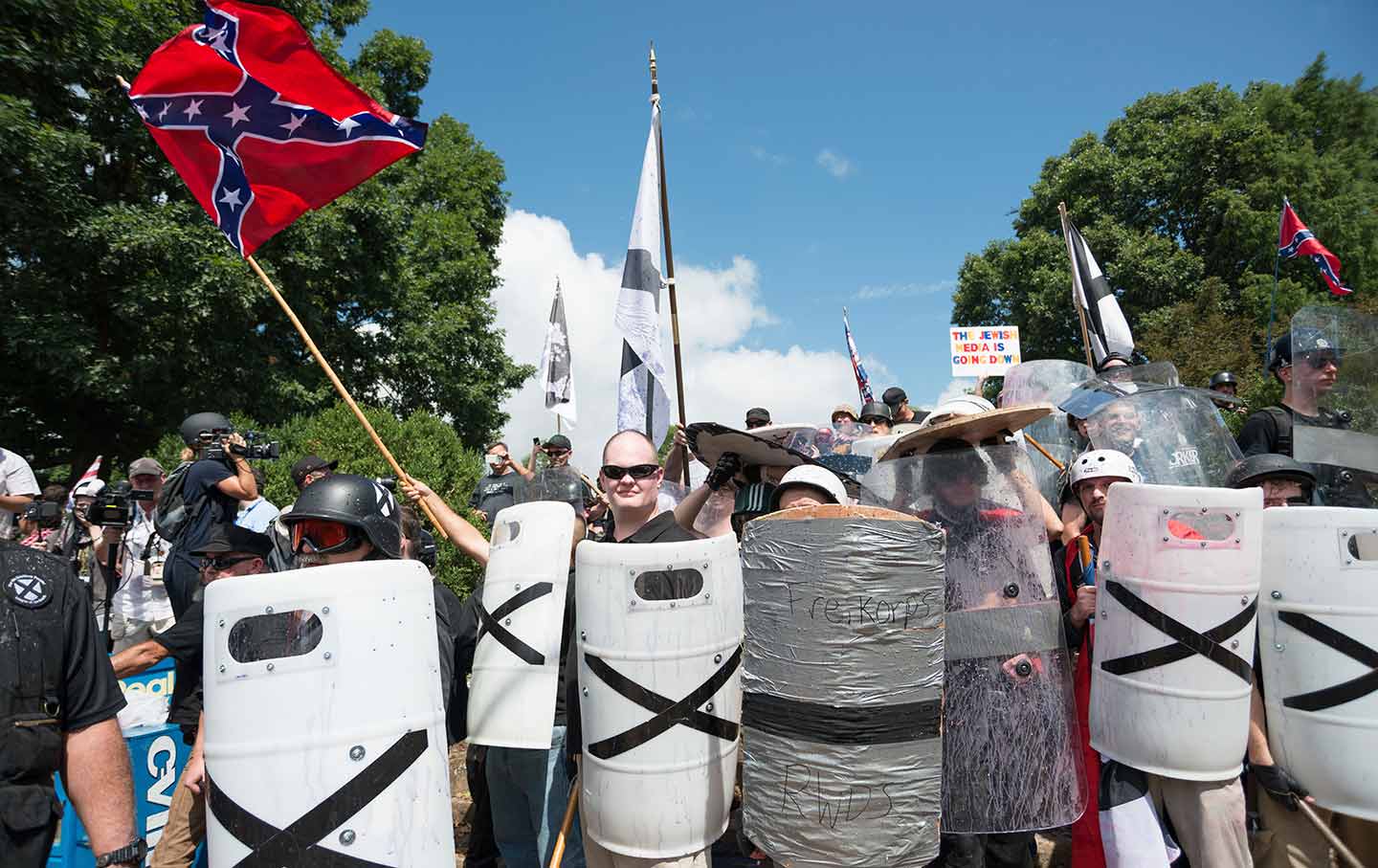 The ‘Great Replacement’ Is a Genocidal Playbook

The Identitarian movement, also known as Generation Identity, has been one of the most prominent groups on European campuses in recent years. It was originally founded in France and has groups all over the world. Members espouse the racist “great replacement” theory and its Austrian leader, Martin Sellner, is currently being investigated for links to Christchurch shooter Brenton Tarrant. Earlier this year, they were ordered by authorities to leave Greece after protesting migrant arrivals in the country.

Identitarians explicitly borrow from left-wing protest culture and cite groups such as Greenpeace as an inspiration. Goetz has recorded dozens of campus stunts by the group in Germany and Austria, ranging from sticker campaigns to aggressive actions such as the incident at Klagenfurt. Identitarians are also known to have targeted students in other countries across the continent, including pamphleteering at the University of Liverpool in the UK and the opening of a “community house” in Budapest, Hungary.

Recently, the group’s ability to organize has been severely curtailed thanks to the Christchurch investigation. Its social media accounts have been deleted, it is difficult for the group to accept donations, and prominent supporters have even declared the brand to be “tainted.” However, senior members are already regrouping under new names. In Austria, leaders are organizing protests and creating social media content under the name Die Österreicher (The Austrians) DO5. The group espouses the same ideology as The Identitarians, yet appears to be modelling itself on citizen-led movements, such as Fridays for Future. The rebranding offers insight into how nimbly far-right groups get around restrictions, and how they continue to co-opt features of progressive movements in order to appeal to young people.

The Identitarians first gained notoriety in Germany in 2017, when they opened a four-story house close to the University of Halle in the east. Members gave media interviews claiming they wanted to target the “liberal” culture of universities and hosted events featuring prominent members of the international far right.

Residents claimed to be nonviolent and intellectually superior to traditional Nazis, despite group leader Mario Müller’s having a well-documented history with NPD, the German neo-Nazi party. However, a total of 31 violent incidents linked to the house were recorded by the government-supported counseling centers for victims of right-wing violence, including an incident where Identitarians attacked two off-duty police officers with mace and batons after mistaking them for left-wing activists. They are currently awaiting trial.

According to students, the rates of low-level intimidation and provocation were even higher. “Last summer, I was getting harassed really regularly, like every fortnight,” says Katherina Hindelang, who says she became known to the Identitarians after they spotted her on a demo. “They’d shout ‘leftist bitch’ or catcall.” Other students claim members of the group have come to their homes and harassed them or left far-right stickers and flyers at their doors.

The Identitarians claimed to have left the house in December 2019 after both local activism and increased surveillance by Germany’s security services curtailed their activities, although an affiliated group, Ein Prozent, remained inside. The house appears to have been fully vacated in June 2020.

This thwarting of the far right’s attempts to create a neighborhood stronghold is solid evidence that nonviolent anti-fascist activism can work. However, the group’s prolonged presence has arguably emboldened far-right activity in the university town. Since May this year, far-right groups have been regularly taking up space in the main market square, protesting against coronavirus restrictions and disseminating other extremist propaganda.

The template for the Identitarians’ activities was developed by the Italian group CasaPound, which combines far-right ideology with far-left tactics such as squatting social centers and staging banner drops. Blocco Studentesco, its student body, was founded in 2006 and at one point gained control of the national assembly of students. “They pushed the cultural dimensions of collective action, music and graphic communication without explicitly referring to fascism,” says Emmanuele Toscano, a sociology researcher at the University of Marconi. “It allowed them to grow amongst younger groups without directly facing fascist issues.” Its official numbers have waned since its director Francesco Polacchi was charged with a number of violent attacks in 2017, but according to Italian journalist and far-right expert Paolo Berizzi’s recently published book The Education of a Fascist, a number of informally affiliated student groups are still active and campuses remain an important recruitment ground for extremists in Italy.

For as long as the far-right has existed, the recruitment of young people has been essential to its growth. From Hitler Youth to Mussolini’s Opera Nazionale Balilla, young people give early fascist movements energy and longevity. Throughout the 20th and 21st centuries, right-wing groups consistently evolved, co-opting subcultures such as punk, metal and, more recently, online cultures such as gaming in order to attract new recruits. Targeting campuses gives groups a veneer of intellectualism, helps them access those who may become future leaders in society, and also creates a recruitment funnel for mainstream right-wing parties. Universities, of course, also tend to harbor strong leftist and anti-fascist movements, so another tactic of far-right survival is to quickly and nimbly rebrand after being exposed or having their organizing curtailed.

In Austria and Germany in particular, far-right groups have a long and violent history on campuses. All-male student fraternities known as Burschenschaften, many of which were founded on nationalist principles, have been active since the 19th century. During the 1930s, some of them became an integral part of the Nazi movement, particularly in Austria, with certain members holding senior regime positions. Most dissipated after the end of the Second World War but many regrouped in the 1950s. Today, they offer cheap or free accommodation to male students and have strong links with both the Identitarians and mainstream far-right political parties.

“[Burschenshaften] consider themselves the academic backbone of the Austrian [far-right] Freedom Party,” says Bernhard Weidinger, a researcher on the far right, who explains that the party used the student groups to recruit for staff roles while part of a coalition government from 2017 to 2019.

Burchenschaften also give far-right groups such as Identitarians a safe space to regroup, rebrand, and hold events. Burchenschaften in the German cities of Dresden and Düsseldorf recently hosted “patriotic rap” concerts by Identitarian member Kai Naggart, who now performs under the alias PrototypNDS.

At the University of Vienna in Austria, where one far-right Burschenschaft holds a weekly march, clashes broke out in January after the university allowed a professor with nationalist views, Lothar Höbelt, to hold a series of open lectures. A professor of modern history, Höbelt has contributed to a commemorative book about Holocaust denier David Irving and has a long history with the Freedom Party.

“When [the student union] found out [about his activities] last November we began protesting his lectures,” says one student activist, Julia Spacil. “Then the Identitarians [including leader Martin Sellner], Burschenschaften members, and young Freedom Party members decided to ‘defend’ his lectures.” Identitarians organized the action under the new name “The Austrians.”

Spacil describes the sight of right-wing extremists lined up at the back of the lecture hall as “intimidating” and says she believes the university should have intervened. However, events such as these pose a conundrum for academic freedom. “I think the university is in a tough spot here. In my opinion, he was a bad choice for a professor. But now he is there, the university can’t just kick him out,” says Weidinger. “Whenever conflicts like this pop up, the university seems helpless. It says that on academic soil people should sit down and sort out their conflicts rhetorically. That’s simply a naive approach to a clash between anti-fascists and right-wing extremists.” The University of Vienna didn’t respond to The Nation’s request for comment.

Goetz says she doesn’t believe universities are taking enough preventive action against far-right activity. “My experience is they usually only react after something happens,” she says. “I think they could help lecturers prepare for situations so that people know in advance what to do.” She adds that it would be helpful to train lecturers on how to react, because far-right groups “thrive off the attention.” As universities tentatively reopen following the coronavirus pandemic, there’s a high chance far-right groups could be looking to exploit students’ anxieties as they face a looming recession and continued restrictions on their social lives.

At Klagenfurt, Wutti says the university reacted “very positively” in the aftermath of the stunt. “E-mails were sent to all students explaining the university did not agree with non-tolerant and non-democratic actions and that they were against the Identitarians,” he explains. “A lot of information was circulated about them and what they believe, and many guest speakers came to talk about who they were.” Security presence was also increased and classrooms were kept locked between lectures.

However, Wutti believes that something more “sustainable” should be in place permanently, given that far-right groups still have a presence. “It could happen again,” he concludes. “I think we should have permanent, ongoing courses on right-wing extremism so students know who these people are.”