According to Peter Kornbluh, Raúl Castro’s most consequential achievement was the 2014 accord with Barack Obama to reestablish bilateral diplomatic ties and advance toward normal economic relations. (Ramon Espinosa / AP Photo)

Exactly 60 years ago, as the CIA-led invasion force approached the Bay of Pigs, Fidel Castro declared Cuba a socialist state. “What the imperialists cannot forgive is that we are here,” Castro said in a speech, filled with anger and pride, at the funeral of 11 air force personnel killed during the preliminary airstrikes on April 15, 1961. “This is what they cannot forgive: the fact that we are here right under their very noses,” he told an audience of thousands as he rallied the country to fight the impending invasion. “And that we have carried out a socialist revolution right under the nose of the United States!”

With his country facing the imminent threat of US aggression, this was Castro’s first public proclamation of Cuba’s ideological direction. As such, the Cuban Communist Party (PCC) has identified April 16, 1961, as its symbolic date of origin. The last several party congresses have been scheduled on the anniversary of the invasion, tying the ideology of the revolution to the David vs. Goliath victory over the CIA’s brigade of exiles in the Bahia de Cochinos. Just as the Bay of Pigs marked a turning point for the young revolution, the 8th Party Congress convening this weekend is a major juncture for Cuba.

At the top of its agenda, the PCC will address how Cuba can recover from its pandemic-induced economic slowdown. Amid that crisis, the politburo and party cadre will also bid goodbye to their first secretary, Raúl Castro. As he approaches 90 years of age, Castro is relinquishing his powerful position as party leader. His retirement marks the official end of the Castro era—and an opportunity for the Biden administration to reconsider six decades of US hostility toward Cuba.

What the post-Castro era portends is a matter of intense speculation—on the island and in the international community. “This will be the Congress of Continuity,” signaled the PCC’s official convocation about the change in leadership, “expressed in the gradual and orderly transition of the main responsibilities of the country to new generations.”

But many Cubans who are experiencing the most desperate economic situation since the collapse of the Soviet Union seem less interested in continuity than in change. Like so many countries battered by the coronavirus, Cuba has seen its economy severely contract—by an estimated 11 percent. Shortages of oil, food, and basic goods are widespread; inflation is rampant. Under Miguel Díaz-Canel, who took over as president from Raúl Castro in 2018 and who is now expected to assume his duties as first secretary of the PCC, the government has received high marks for public health management during the pandemic and for developing several vaccines that are now in final trials. But the clamor for bold reforms to revive Cuba’s moribund economy, as expressed through the relatively new phenomenon of social media on the island, is growing louder.

As he steps down, Raúl Castro leaves a legacy of tentative reform. When he took over from his ailing older brother in July 2006, Raúl Castro initiated an effort to move Cuba into the modern, globalized world. Cuba, he famously stated, would reform “sin prisa pero sin pausa”—without haste but without pause. Castro haltingly opened the state-monopolized economy to small private sector entrepreneurship, establishing a list of 120 authorized work sectors for which Cubans could obtain self-employment licenses. To provide incentives for food production, Castro allowed farmers to sell a portion of their crops at private markets. He lifted restrictions on cell phone ownership, broadened Internet access, allowed Cubans to buy and sell homes, and even authorized the French automaker Peugeot to open a dealership in Havana for the few Cubans who could afford a new car. While a clear departure from Fidel’s far more orthodox approach to a state-controlled, centralized economy, the advance of these reforms proved to be limited and impeded by party infighting and bureaucratic resistance.

Only under extreme pressures from the Covid-19 crisis has the Cuban government finally implemented policies that Raúl Castro announced more than a decade ago. To advance economic efficiency, in January Cuban officials initiated the long-delayed merger of Cuba’s dual currencies—the peso, which the majority of Cubans use, and the convertible peso used mostly in the tourism and business sectors to obtain foreign currencies that Cuba can then use to pay for foreign imports. In February, Díaz-Canel’s government expanded the number of private-sector occupations from 120 to over 2,000. Last week, the Cuban Ministry of Foreign Trade and Foreign Investment even announced that it would welcome Cuban American investment on the island—an effort to attract a natural investor community and rebuild a constituency for normalized relations with the United States. 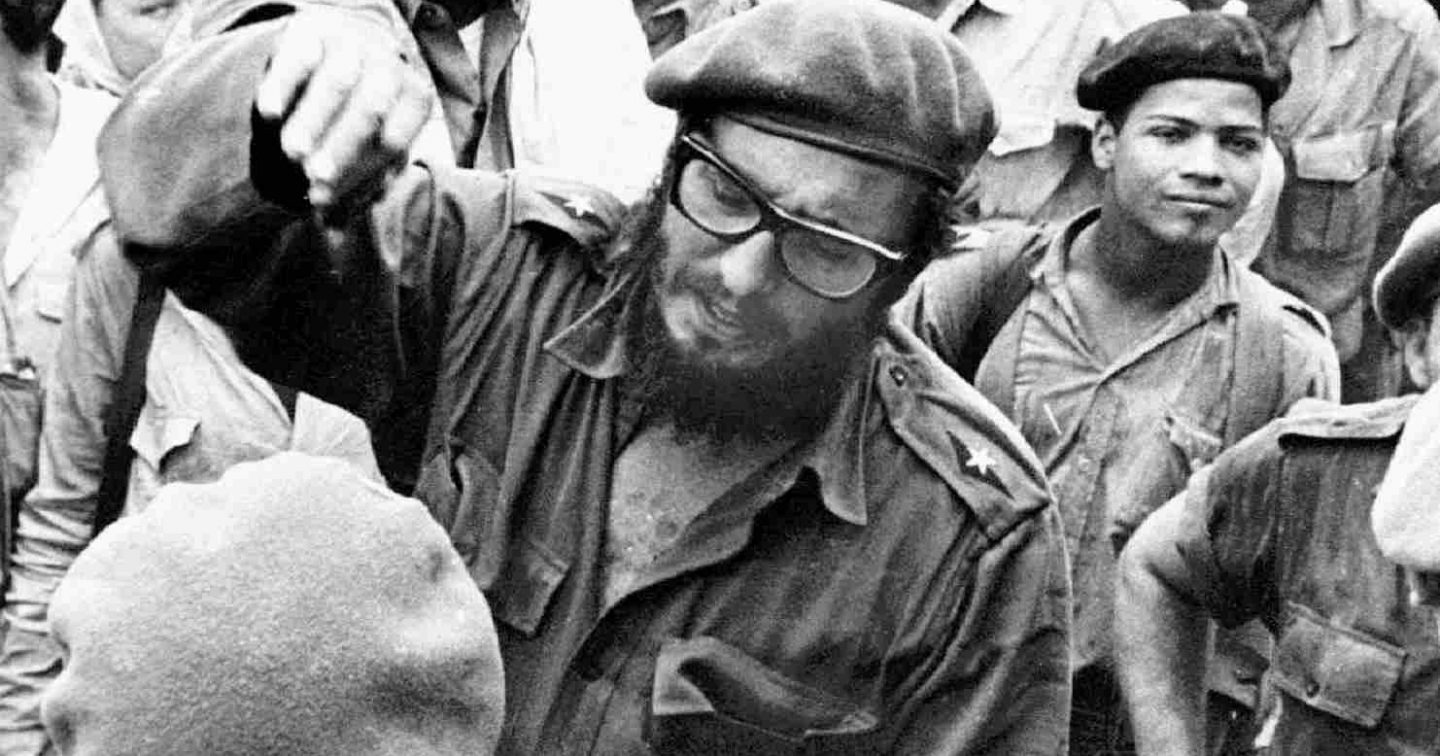 Fidel Castro stands with the Revolutionary Armed Forces during the Bay of Pigs invasion in April 1961. (Str / AP Photo)

As head of state, Raúl Castro’s most consequential achievement was the December 17, 2014, accord with President Barack Obama to reestablish bilateral diplomatic ties and advance toward normal economic relations. After 55 years of perpetual hostility, peaceful coexistence quickly provided benefits for the expansion of Cuba’s economic development—fueled by a massive influx of US travelers, US companies seeking business opportunities, and Obama’s decision to lift the cap on the flow of remittances from Cuban American families to relatives on the island.

Making good on his campaign promises to “cancel” the Obama-Castro agreement, Trump took a wrecking ball to the US policy of positive engagement with Cuba. His craven application of US sanctions on travel, remittances, and trade escalated as he trolled for Florida votes in the 2020 election. Pandering to the Cuban American electorate, he even invoked the failed Bay of Pigs invasion. “We will honor your courage with my administration’s determination to defeat communism and socialism,” Trump pompously predicted last fall during a special White House forum with elderly veterans of the CIA’s exile brigade. “And we will do that in our country too.”

Despite his own campaign promises to return to a sensible policy of engagement with Cuba, President Joe Biden has, so far, left all of Trump’s sanctions in place. Three months after his inauguration, remittances are still restricted, travel is still severely limited, and the US Embassy in Havana, all but closed by the Trump administration, continues to operate with a skeleton staff. “Joe Biden is not Barack Obama when it comes to his politics towards Cuba,” the administration’s top National Security Council official on Latin America, Juan Gonzalez, told CNN last week, admitting that the administration saw no urgency in redressing Trump’s punitive approach. “I’d say that [with] the disorder we inherited from the previous administration, [Cuba] might not be where we will invest our initial political capital or the time of this administration.”

With a policy of hostility still in place, the symbolism of the Bay of Pigs invasion continues to resonate in the current debate over US-Cuba relations—as an act of aggression that defines the self-defeating danger of US intervention. Even John F. Kennedy’s own postmortem on the debacle remains relevant to the Biden administration’s reconsideration of US policy. “A wise man once said, ‘An error doesn’t become a mistake until you refuse to correct it,’” the chastened president told the press after the Bay of Pigs invasion failed. There were, he said, “sobering lessons for us all to learn.”

Much has changed since the CIA-led paramilitaries landed on the beaches of Playa Giron. The Cold War is over; the Castros are gone; and Cuba is undergoing an economic transformation and a generational transition of leadership.

But much remains the same. The United States still appears unable to accept that the Cuban revolution is, as Fidel Castro stated, “here right under their very noses.”