Every day during the weeklong holiday of Tiradentes in Brazil, Luísa Classen woke up at 8 in the morning, put on a comfortable swimsuit, applied glitter makeup to her face, and headed to a street party in the city center of Rio de Janeiro. Though Carnaval is usually in February, from Thursday, April 19, to Sunday, April 22, Classen and thousands of partygoers, musicians, dancers, and street sellers attended their second Carnaval of 2022.

This turn of events was somewhat surprising: Officially, the street parties had been canceled for the year. In January, after a year without Carnaval because of the pandemic, the mayor of Rio de Janeiro called off the upcoming February street parties in light of high Covid-19 numbers following end-of-the-year festivities. In Brazil, 667,000 people have died of Covid-19 so far during the pandemic, bringing the country—and especially those who financially depend on Carnaval and cultural production to survive—to a halt since March 2020.

To dissuade partygoers from creating crowds, Mayor Eduardo Paes provided no support for the groups that would take to the street to play music, drink, dance, and put on the world’s biggest party. Meanwhile, the mayor allowed private club parties, sponsored by corporations, to go on across the city during the week of Carnaval—for prices that were inaccessible for most of the population.

But the foliões (revelers) were not dissuaded from partying in the streets—if anything, the cancellation of publicly accessible parties triggered protests against “the elitization of Carnaval” by the organized Carnaval groups called blocos. Carnaval lovers took to the streets in February in defiance of the lack of government support—and they did it again in April and May. The parties harkened back to the Carnavals of the 19th century, when street parties and carnal indulgences became key to the festivities, and when the bourgeois media campaigned against and stigmatized street parties attended and organized by the working class, while Brazilian elites held masquerade parties in theaters and clubs. 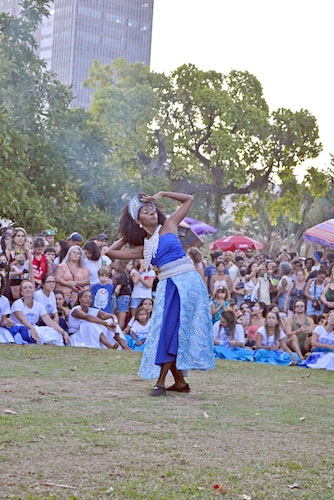 “Carnaval is a party for everyone and it should always be free,” Classen said. “It is very much like a day at the beach: You see different people divided by their social class, but everyone is in the same space—there’s no priority in sunlight depending on the price you pay.”

During Carnaval, the streets are filled with vibrant music, people in makeshift costumes dance to drum beats, and street vendors are ready with iceboxes full of beer and water. Each bloco, or party group, is different—they vary in music choice, size, theme, and general vibe—but everyone is always welcome. Costumes vary from the colorful and traditional to the skimpy and practical, perhaps the only rule being the application of glitter wherever you can place it.

The last time Carnaval was canceled was in 1918, because of the Spanish flu pandemic. Much like in 2021, partygoers didn’t gather in the streets to avoid super-spreader events. There aren’t exact statistics about the mortality rate of the Spanish flu in Brazil, but 12,700 deaths were recorded in Rio de Janeiro at the time; during the Covid-19 pandemic, there were 73,643 deaths in the city. In 1919, after surviving a pandemic and the First World War, partygoers and organizers made Carnaval last for three months. The March 3, 1919, edition of the daily Correio da Manhã reported: “Carnaval is the great force that liberates residents of Rio from the sadness of the rest of the year.”

“I think we saw a period of grief because of the pandemic,” said Glauber Oliveira Alencar, a publicist who plays trombone and the snare drum during Carnaval, recalling the 664,000 people who died of Covid-19 in Brazil. “And now we are living a moment of pleasure. We are allowing ourselves to do things we couldn’t do before.”

This year’s double Carnaval has explicitly returned the event to its democratic, working-class roots—and the continued festivities without the support of the authorities demonstrate that it is a party that belongs to the people. The movement Ocupa Carnaval pushed back on the mayor’s decision not to support the street parties by releasing a manifesto signed by over 140 groups across the city.

“Carnaval is not a social event that depends on the permission of the public authorities, it’s an expression of the people and a historical right conquered through struggle,” the manifesto released on April 13 reads. “The street belongs to the people and our voices are free…. We are many: street sellers, musicians, partygoers, dancers, seamstresses, artisans, etc. Carnaval is work, party and a collective struggle.”

Though Carnaval was first brought to Brazil by the Portuguese through colonization, the holiday was remade by African slaves who integrated their rhythms and religious beliefs into their celebrations. Since then, Carnaval has been historically frowned upon and repressed by authorities, including religious groups and elected officials—from 1905 to 1915, for example, street party groups and other cultural forms of the Afro-Brazilian festivities were banned. And when that failed to stop the street parties, the monetization of the party by big corporations became the default. The corporatization of Carnival is, of course, beneficial for the city: Today, Carnaval creates a profit of $4 billion reais (roughly US $800 million) in Rio every year, which corresponds to 1.4 percent of the city’s yearly GDP.

The current political climate is also ripe for a prolonged 2022 Carnaval. While Brazil’s evangelical President Jair Bolsonaro makes statements about the Brazilian armed forces’ being actively involved in the upcoming presidential elections, reminding Brazilians of the 1964 dictatorship where the military took over the government, Rio residents demonstrate that the people are capable of organizing themselves without the authorities. Carnaval, as a holiday that celebrates carnal pleasure without shame, is generally frowned on by the religious groups that support the current president and lean more conservative, adding a layer of political resistance to this year’s clandestine festivities. In several street parties, partygoers chanted for the president to go “fuck himself,” sang songs in favor of the opposition, and reveled in carnal pleasure in defiance of the evangelical president. Partygoers distributed stickers calling for Bolsonaro to be ousted and for the election of his opponent and ex-president Lula da Silva, a demand voiced often and with abandon.

When the pandemic forced the cancellation of Carnaval in 2021, thousands of musicians, performers, street sellers, artists, and anyone involved in the yearly event took a hit financially. The pandemic deepened the inequalities that already existed in Brazil, leaving 15 million people unemployed, forcing workers into precarious informal work. The Brazilian Institute of Geography and Statistics estimates that in 2022 9 percent of the Brazilian population is food insecure. This year’s unofficial party motivated the workers who sell beverages and food to return to the streets. Maria dos Camelôs, a street vendor and organizer of the United Street Vendors Movement in Rio, says Carnaval is when street vendors profit enough to pay their debts and save money for the rest of the year.

“The return of Carnaval was really important for street vendors,” Maria said. “For us, it was better because there weren’t official brands monopolizing the streets. There weren’t any bathrooms, but we didn’t miss them so much. We organized ourselves, went to the streets, and the party was beautiful.”

And the party isn’t over. The city is now organizing a June event to stimulate tourism in Rio during Festa Junina, a yearly month-long celebration of Brazilian northeastern and rural culture. The city hasn’t released much information beyond initial plans to merge Carnaval and Festa Junina festivities somehow, but has indicated that it will support bigger party groups in taking to the streets.

“We will go to all Carnaval events no matter what,” Maria said.