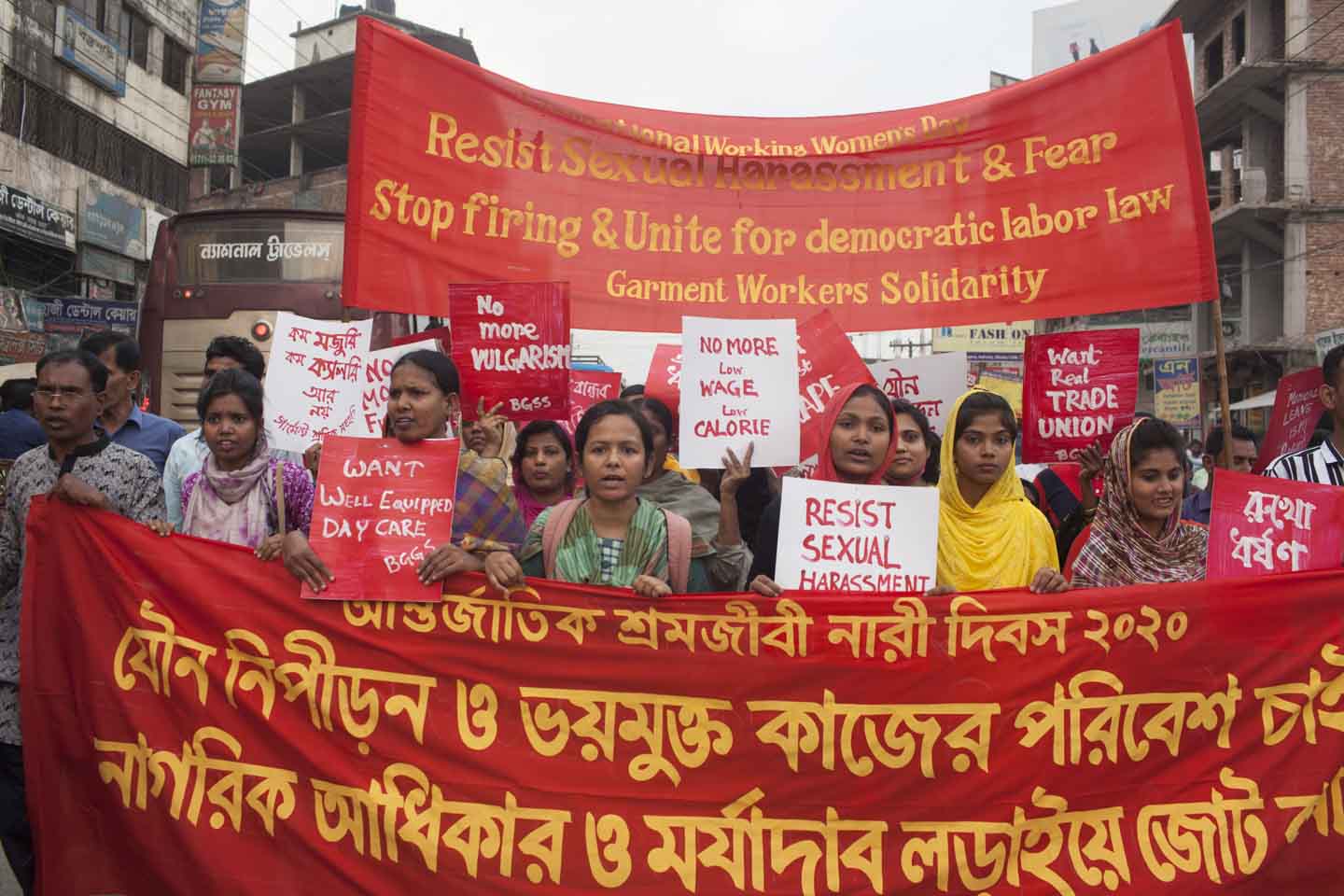 I still remember that colorful day, over three months ago now, when hundreds of young women and men gathered in the streets of Ashulia, an industrial zone outside the capital of Bangladesh, Dhaka, to celebrate International Women’s Day. The young people marching, carrying banners, and chanting slogans were standing in solidarity with the 4 million Bangladeshi garment workers who for years have been struggling to win livable wages, safe working conditions, and dignity for their hard labor. It was in this country in 2013 that the Rana Plaza factory collapse killed more than 1,100 garment workers, and activists have been fighting for years to ensure this kind of man-made disaster never happens again. As I made my way through the rally, photographing and taking in the enthusiasm of the crowd, it felt like the workers’ cause was only gaining strength. But only two days later, on March 8, the first case of Covid-19 was identified in Bangladesh, and everything changed. 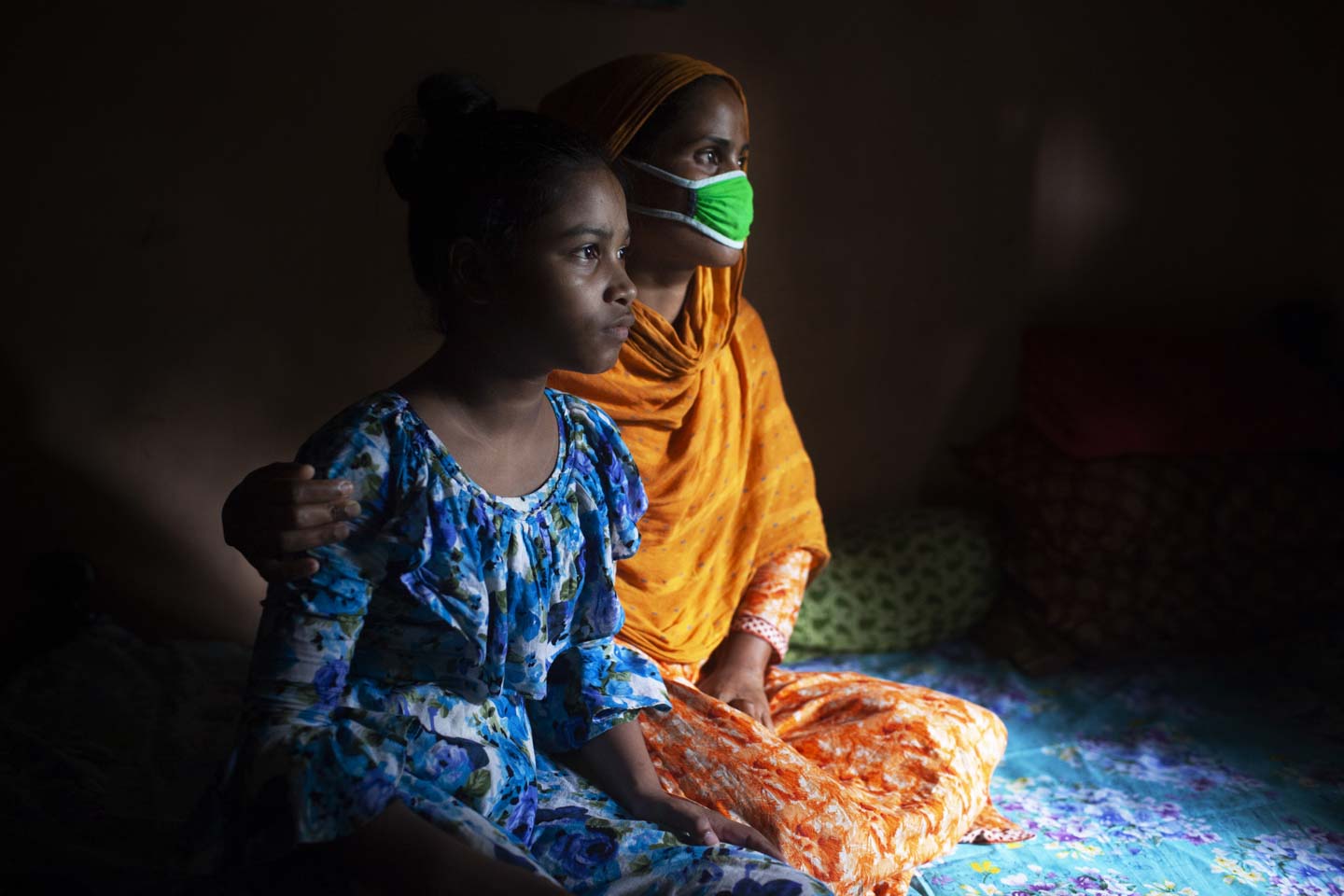 Moushumee, a garment worker and single mother, with her daughter in Ashulia, May 15. Workers like Moushumee are being laid off or having wages withheld during the coronavirus crisis. (Taslima Akhter)

The coronavirus crisis has sent the world economy shuddering to a halt, and Bangladesh’s garment workers have been left particularly vulnerable: Over $3.5 billion worth of international orders have been lost in the country’s garment industry as a result of the global downturn, and half a million workers are at risk of losing their jobs, a fate that has already befallen more than a million workers. 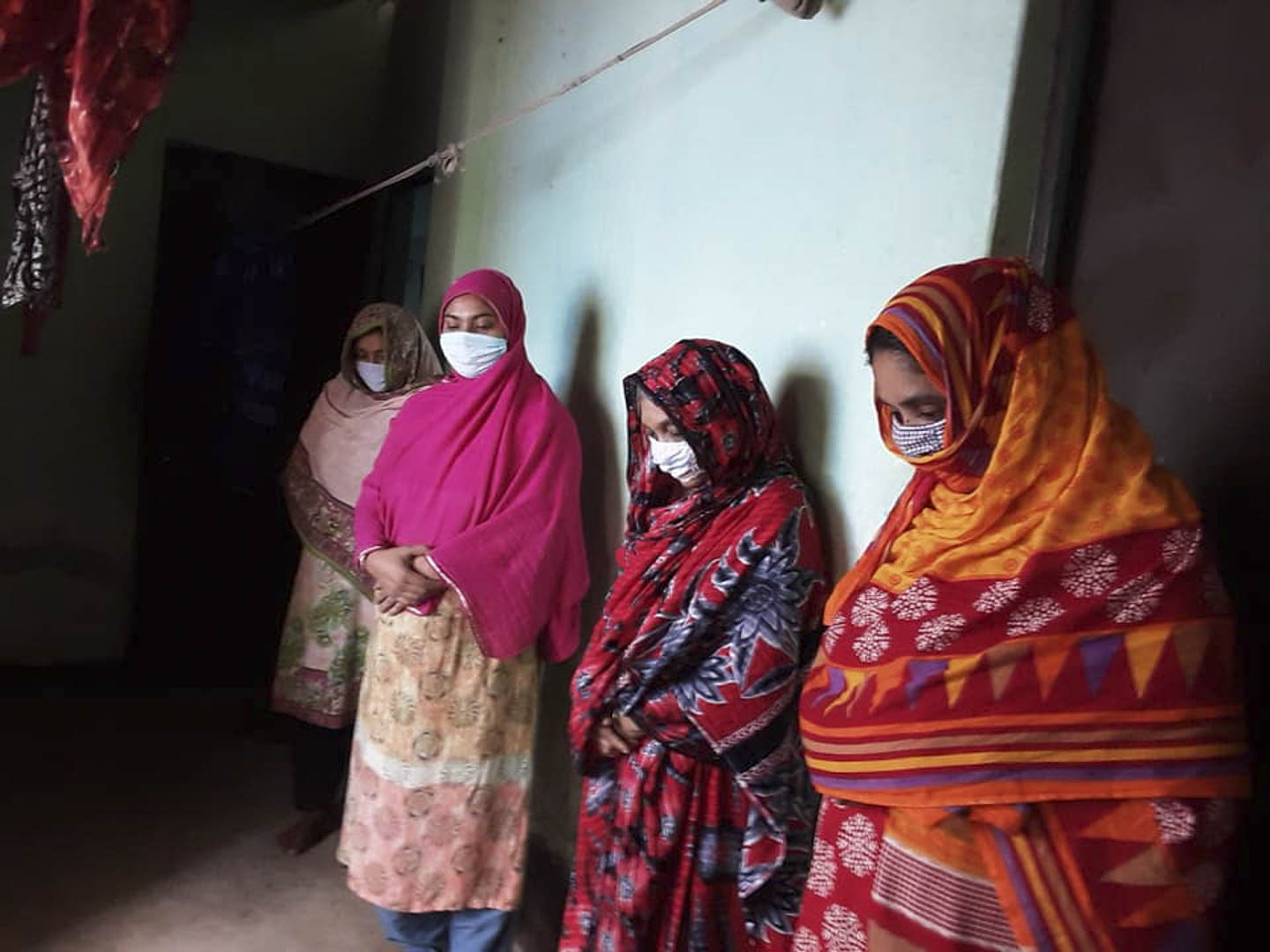 Observing a minute of silence on the seventh anniversary of the Rana Plaza collapse, Savar, Dhaka, April 24. (Selina Shelly)

When the crisis hit our country, everyone started wearing masks. Middle-class Bangladeshis stockpiled months worth of food, and immediately began avoiding crowds, with those able to work from home doing so.

But garment workers haven’t been able to afford this luxury: They continued to go to their factories during the lockdown, and many live in cramped housing that doesn’t allow for the type of social distancing health authorities recommend. When the factories closed for a few days, many garment workers went back to their villages, but the factories are now open again, and because the government has banned passenger transportation, workers continue to come, by car, by foot, and other private transport means. They continue to face the threat of layoffs, wage cuts, and outright wage theft. 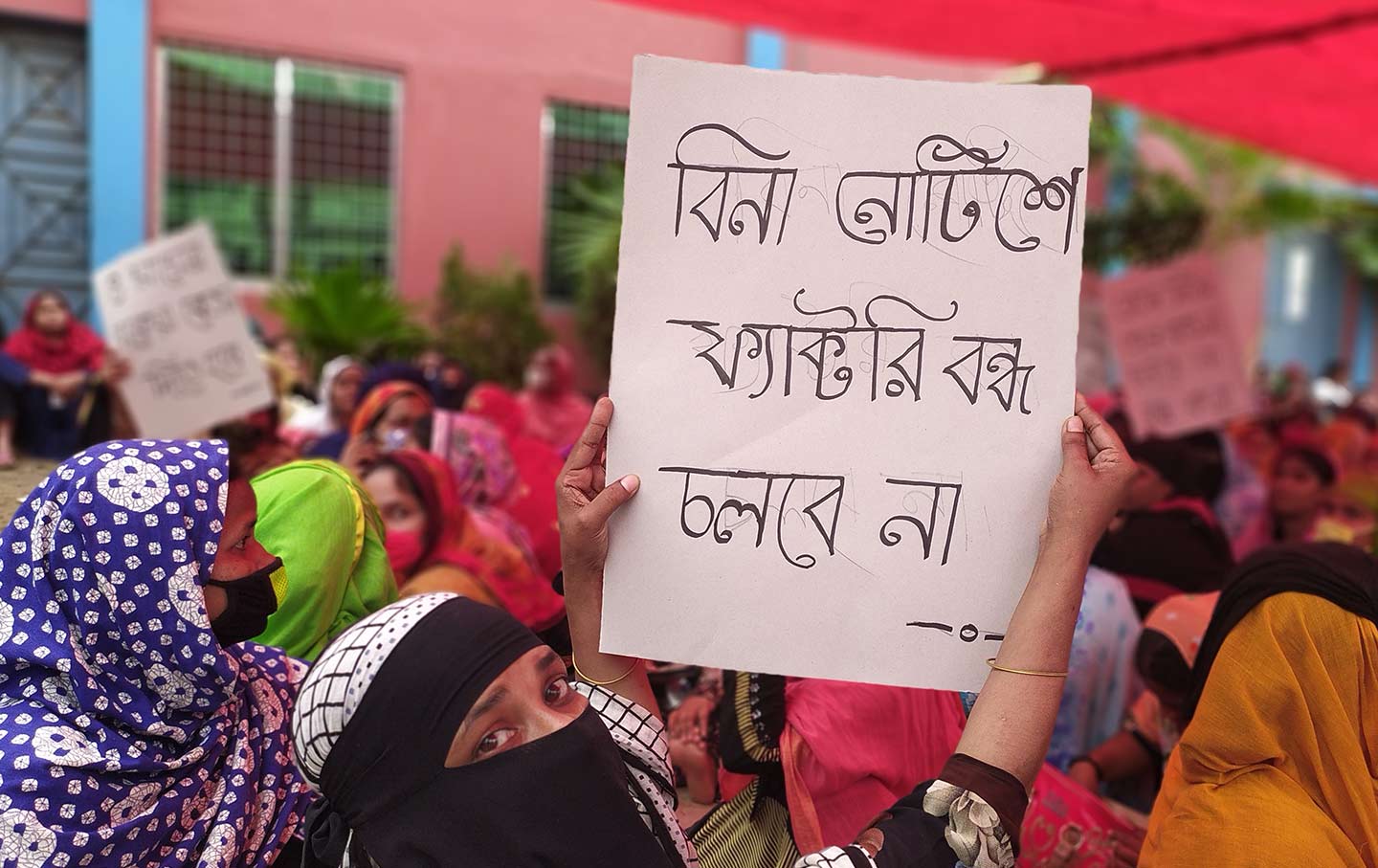 Garment workers protest the management of their factory, which has not given them their wages for the past five months. After relentless pressure, the management agreed to pay them two months salary, but this has not been paid in full yet. May 11, 2020. (Fariya Rahman) 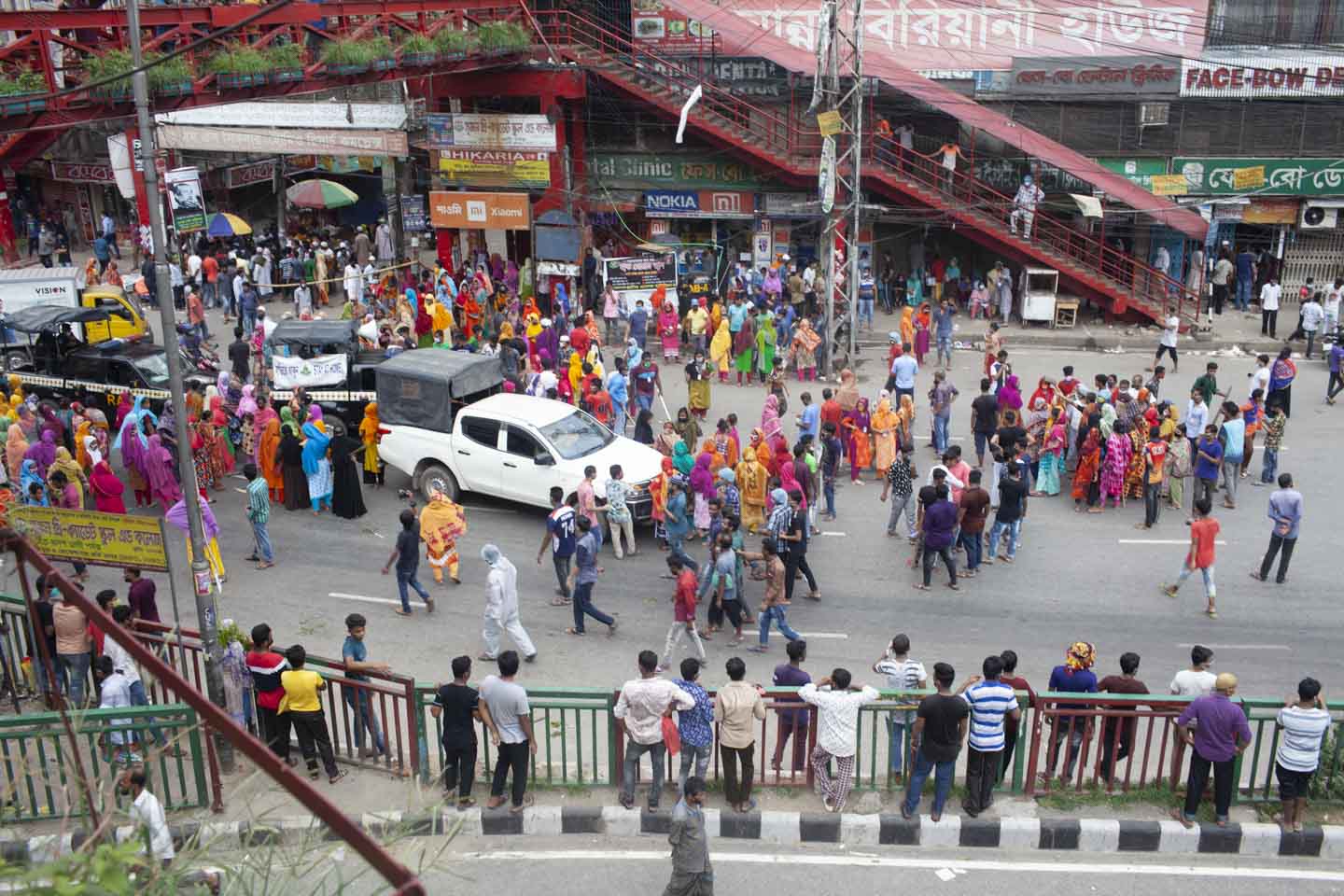 A protest outside a garment factory, which owes its workers two months of back wages and a promised Eid bonus. (Taslima Akhter)

I’m a photographer, but I’m also an activist—the two roles are impossible to separate for me. So throughout this crisis, I have tried to document the workers’ lives and their protests as part of a collective effort to bring their situation and their cause to the attention of the wider world. I’ve been taking photographs throughout this crisis, but I’ve also been continuing my work with the workers’ rights organization Bangladesh Garment Sramik Samhati (Bangladesh Garment Workers Solidarity), organizing meetings on Facebook, and holding discussions on Zoom. We’ve been making images through the cameras on laptops, and workers have been using their cell phones to take their own photos. This is a collaborative effort, and we’ve been adapting our activism to the constraints that the Covid-19 crisis has put in place. 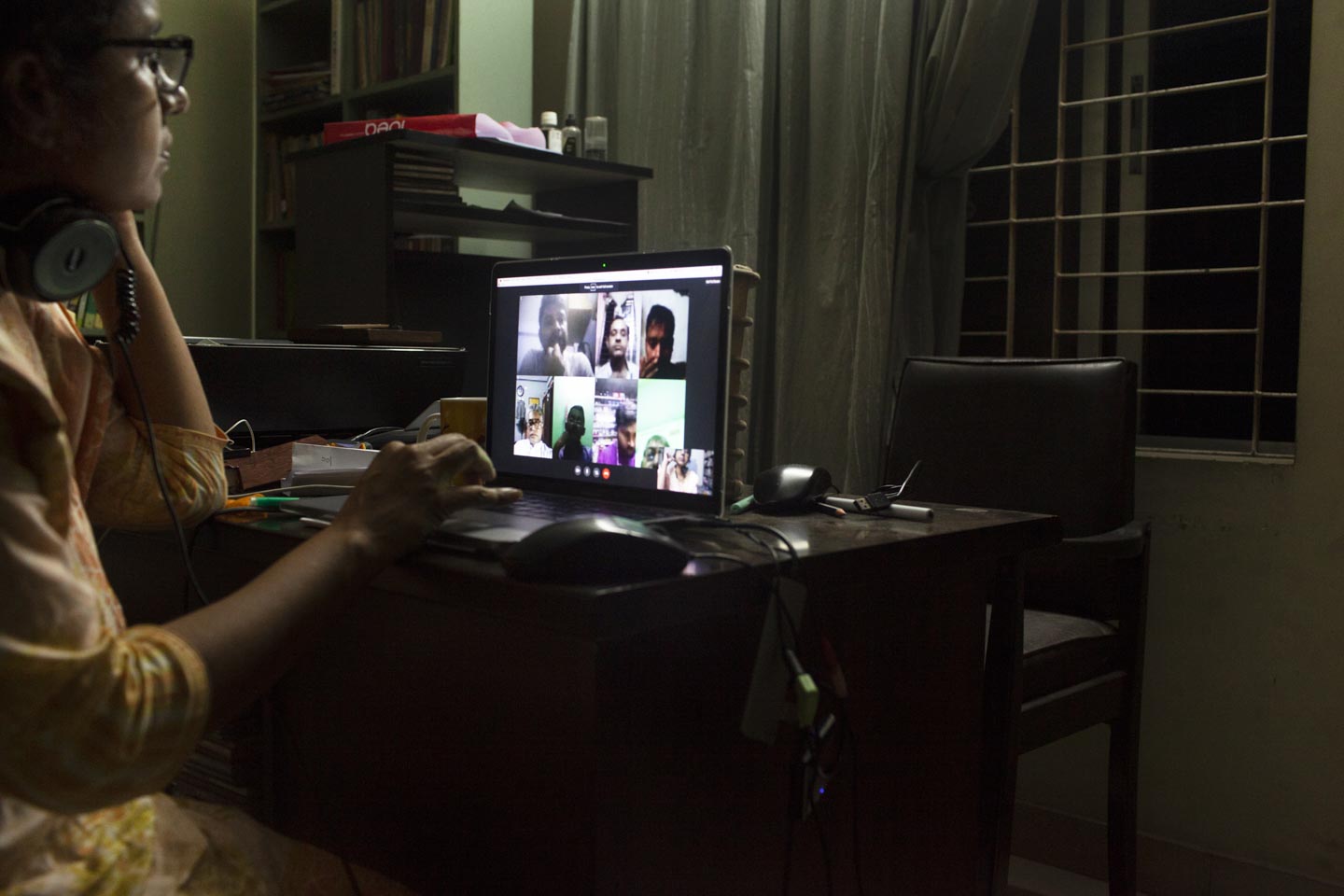 I’ve been using Zoom and Facebook Live to stay in touch with garment worker leaders during the pandemic. (Taslima Akhter) 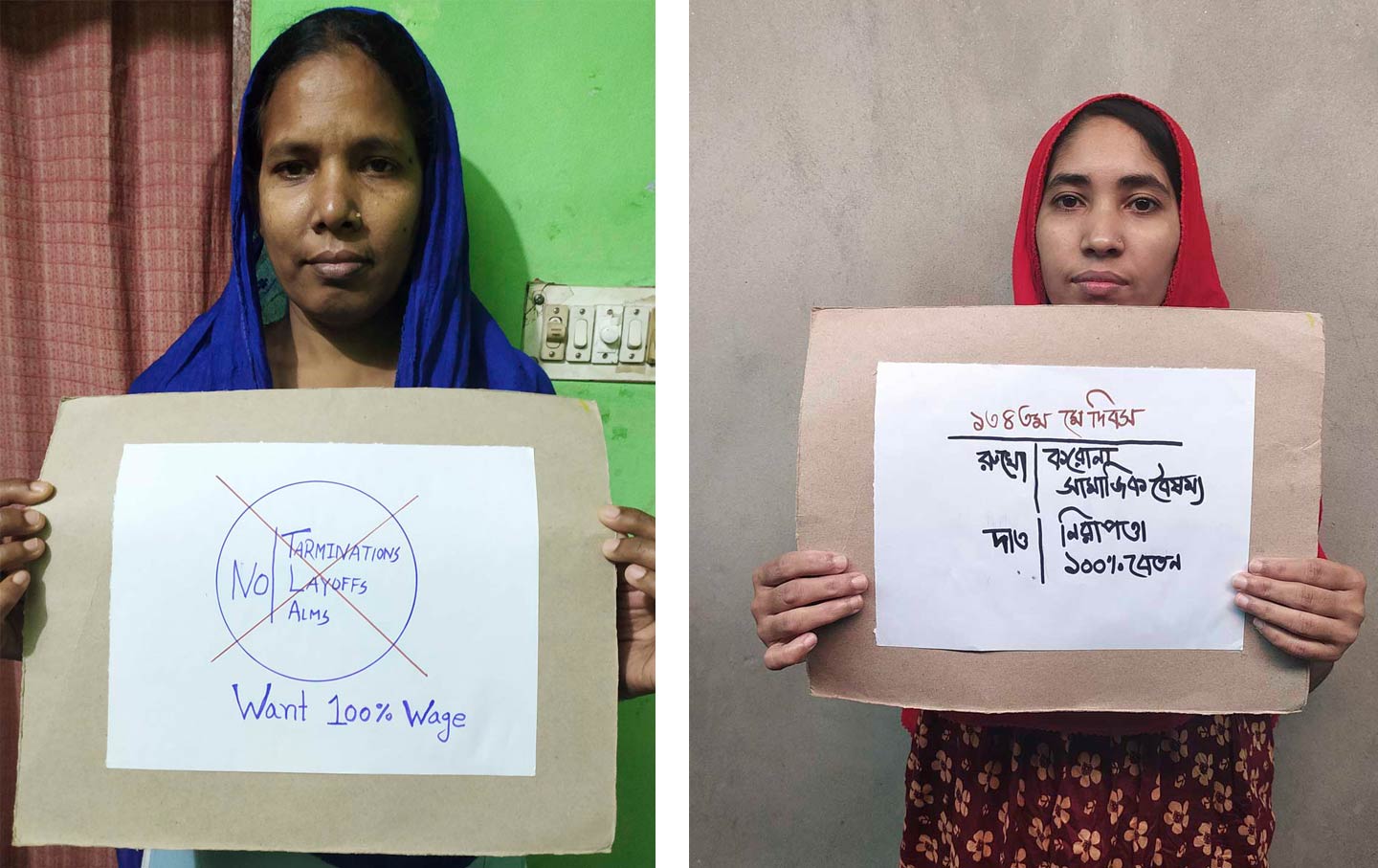 Garment workers protest against layoffs, terminations, and withheld pay—they are demanding 100 percent of their wage during factory closures. (Photos by Fariya Rahman)

Everything is changing so quickly, and the number of Covid-19 cases are increasing every day in Bangladesh. Over 100,000 people have been infected so far, and over 1,300 have died. Movement is largely shut down, so my work has focused on documenting the real conditions workers and their families are facing. 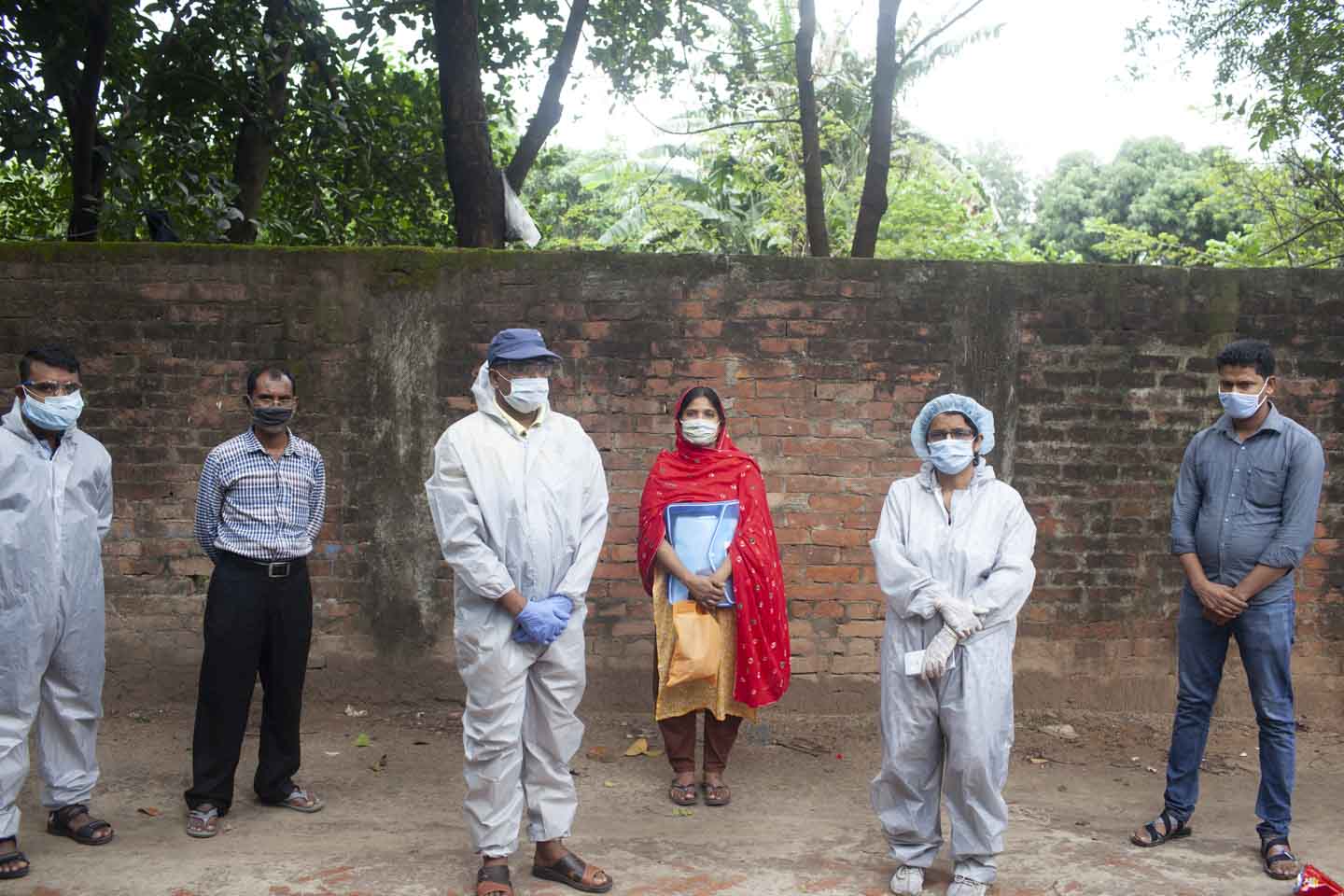 Activist and former garment worker Shama, center with hat, was forced to get an emergency heart valve replacement during the pandemic. I showed up with friends to support him and his family—that’s me second from right in the PPE. (Fariya Rahman) 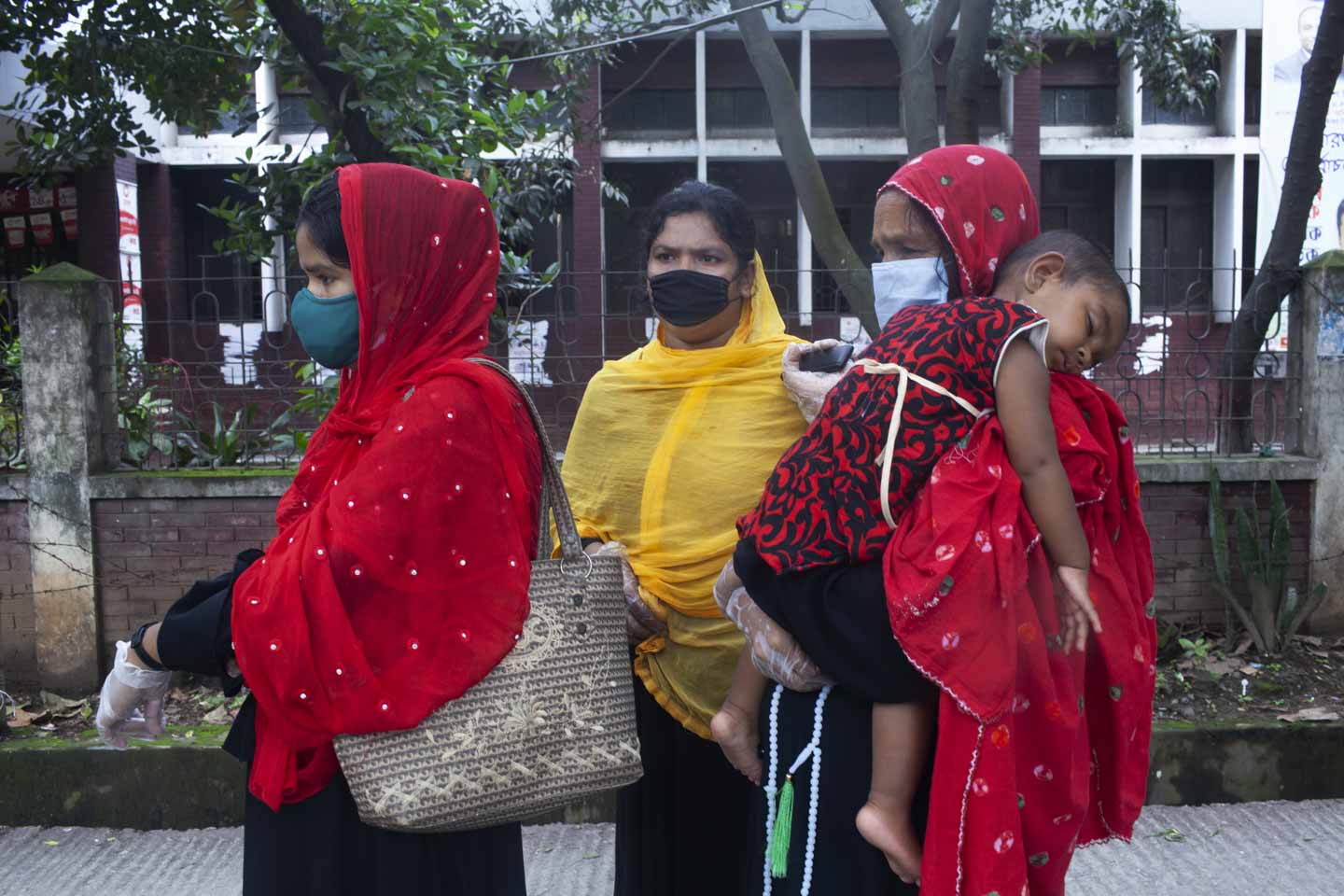 Rani and Kalpona, garment workers and sisters of Shama, wait with their mother, right, outside the National Heart Foundation in Dhaka as Shama undergoes his surgery. Due to the pandemic, they weren’t able to visit Shama during his time in hospital. (Taslima Akhter)

Despite the lockdown, protests continue: Workers are still losing their jobs; they’re still struggling to be paid what they’re owed; they’re still fighting for health care. During one protest, a worker said, “The government has locked down everything, but they didn’t lock down our stomachs. We don’t have any alternative except coming into the street doing this protest. We don’t even have the possibility to maintain social distancing. We are hungry. We don’t know anything about coronavirus. We want food and wages first.’’ 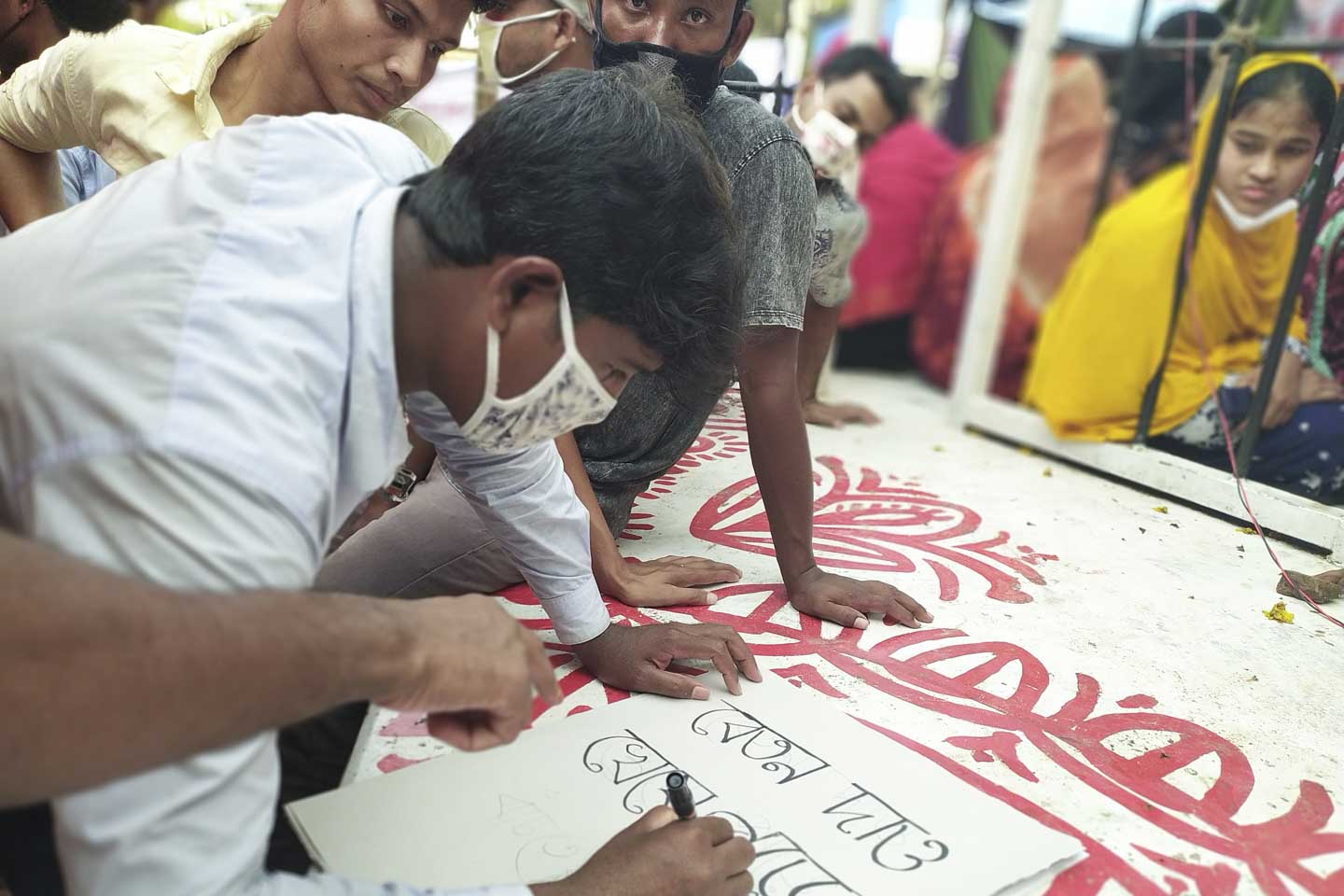 Garment workers create signs for their protest against their wage withholding factory, May 11. (Fariya Rahman)

So that’s what we’re fighting for: We have demanded 100 percent wage and health security for workers when their factory is closed. But factory owners, the international companies that buy the garments, and the government are all failing to take up the responsibility to address these issues.

Garment workers are the backbone of the Bangladeshi economy. The garment sector accounts for 84 percent of the export income for the country, but workers are entitled to only a paltry monthly minimum wage that works out to about $95, with the lion’s share of the profits going to the international brands that buy the workers’ output. Garment workers are human beings like anyone else: They have families and dreams for a better life. But these workers have been sacrificing their youth and their health for the development of the country’s economy, and the factory owners, international buyers, and the government treat them as disposable tools in the pursuit of profit. 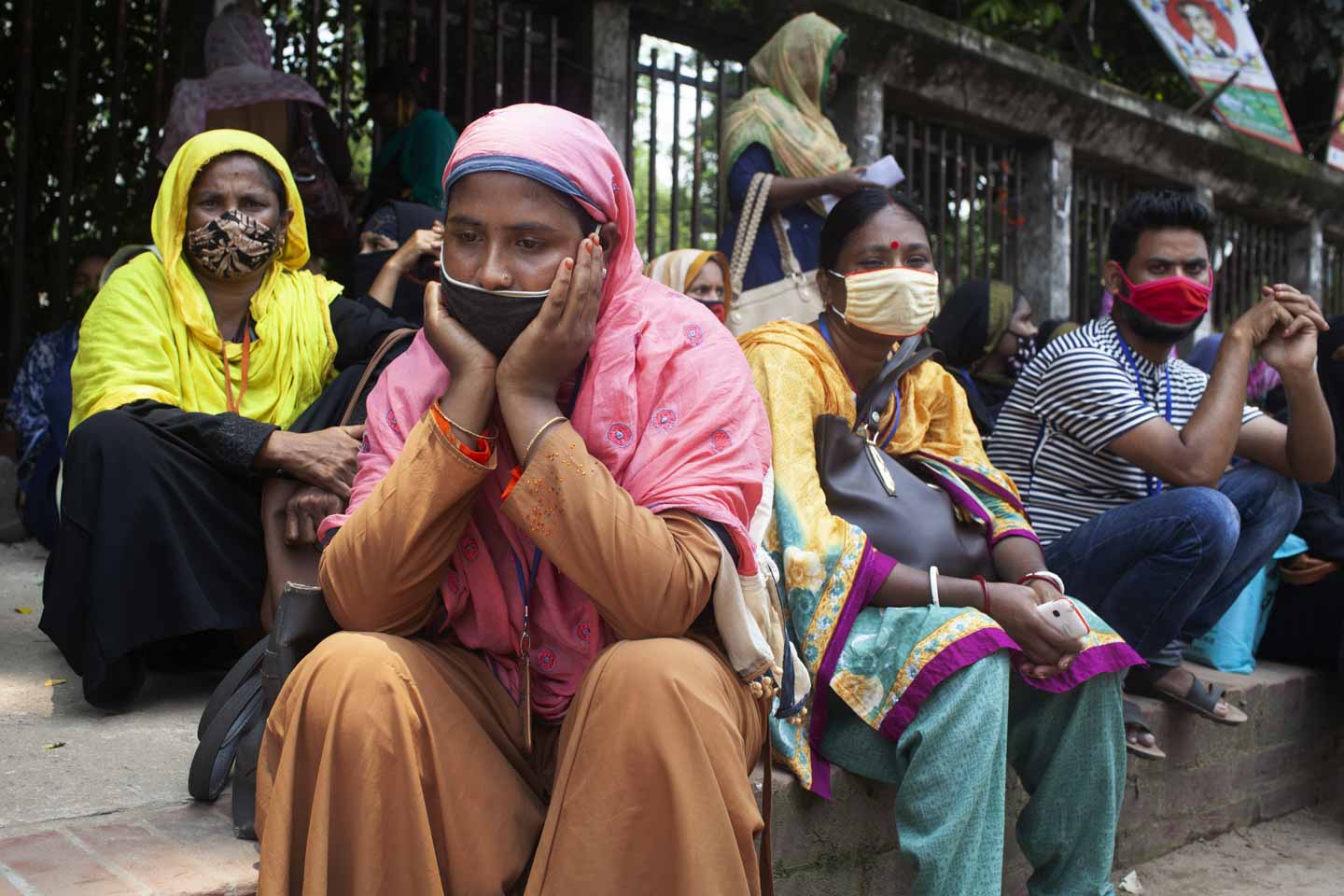 Garment workers protest outside the National Press Club in Dhaka, demanding five months of wages that have been withheld by their factory. Even in the midst of the pandemic, workers have had to gather for protests in order to get wages that are due to them. (Taslima Akhter)

Throughout this crisis I have seen anger, fear, uncertainty, and hopelessness in the eyes and faces of garment workers, but I have also witnessed the collective strength of workers fighting together for their common good, and the resilience of finding new ways of pushing their cause. It’s up to the government, the factory owners, but above all the international brands that profit off these workers to ensure that they can survive this crisis and can depend on a safe and dignified working environment once the crisis passes. 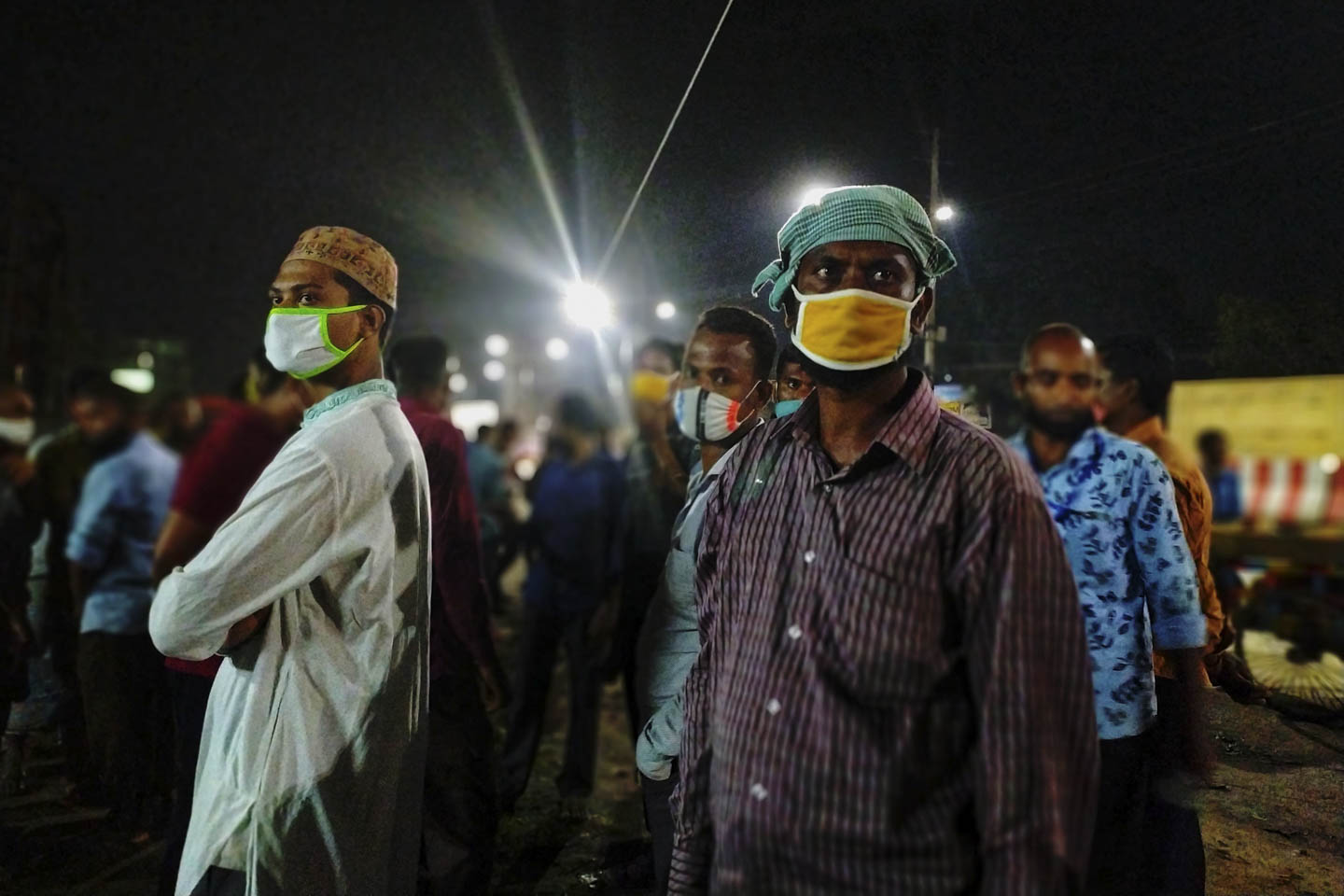