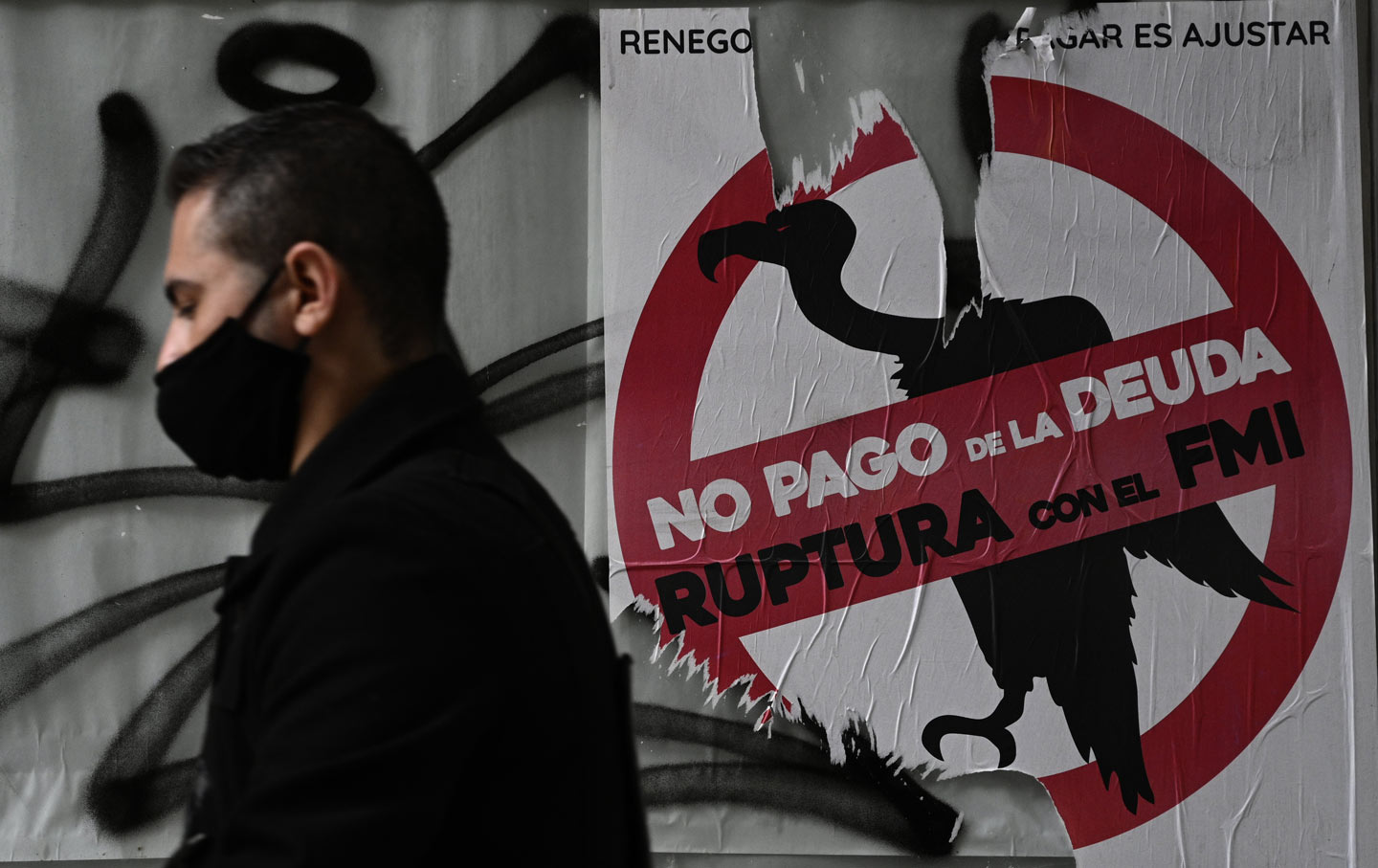 Sign against paying the debt with the IMF posted in Buenos Aires. (Juan Mabromata / AFP via Getty Images)

It’s no news that the world is going through a pandemic, and that the pandemic is having unprecedented impacts on the global economy. While here in the United States the true unemployment rate soars to 25 percent or more, the pandemic has had an even more devastating effect on less-developed countries around the world. Because of poverty, their baseline levels of health are already lower, their citizens live in more crowded and less sanitary conditions, their health care systems lack the capacity to deal with the huge increase in patient numbers, and they have much fewer resources to cope with the health and economic impacts of a prolonged pandemic. We can expect a surge in the number of countries facing debt restructurings—especially among those already overburdened with debt.

That’s why what happens to Argentina is so important. Argentina’s struggles to restructure its debt with BlackRock, Pacific Investment Management Co, and the country’s other major creditors will tell us a lot about the nature of 21st century finance capitalism and the mindset and morality of the creditors: Do they value money over lives? Will they remain shortsighted—a myopia so clearly demonstrated in the run-up to the 2008 financial crisis? Will they stick to their recent rhetoric about “social responsibility” and going beyond just looking after the interests of shareholders? Or is that just rhetoric?

A mild dose of rationality would indicate caution in trying to push Argentina beyond the point of reason. Argentina has made an offer to its creditors that is at the outer limits of what is sustainable—that is, at reasonable estimates of growth rates and other relevant variables, a sum Argentina could possibly pay back. Traditionally, creditors have asked for more than that, which is why half of all debt restructurings wind up being followed by another debt restructuring within five years. The creditors provide too little relief—and they typically provide it too late. Nobody wins from such strategies. The people in the debtor country suffer, and the creditors don’t get back the money they counted on. Far better to agree to a sustainable debt restructuring.

If public reports on the negotiations are correct, it suggests that Argentina’s creditors haven’t adjusted to the new realities of the pandemic—though it simply doesn’t seem possible that they live in such a bubble that they are unaware of what is going on, that the news of the pandemic and its devastating economic consequences hasn’t reached them.

But they haven’t even adjusted to the changed global landscape after the 2008 crisis. Long ago, the IMF used to act as the creditors’ collection agency, showing little concern about the effects of its policies on poverty. In this bygone era, the world itself was arguably less concerned either about sustainability or inclusive growth. But in the post-2008 world, the IMF has become a champion for both, arguing that greater equality leads to better economic performance.

The IMF has recently outlined what Argentina can sustainably pay—an inconvenient truth that the country’s creditors would like to ignore. Just as they would like to ignore the new role the IMF is playing, in the hope that if they just hold out long enough, old-style politics will, in the end, prevail. The old routine goes like this: Creditors lean on the US Treasury, which then leans on the IMF, which leans on Argentina, until finally the country cries “uncle.” Well, that’s not the IMF’s playbook anymore, and the creditors need to throw it out, too.

The first offer made by BlackRock called for Argentina to pay roughly twice what the IMF had determined the country could afford. Evaluating an offer entails assessing what economists call the “time value of money,” or how much in today’s money a dollar will be worth at some point in the future. Debt restructuring requires postponing payments a country can’t make today, adding them into payments down the line. Evaluating these future payments at a 5 percent discount rate (remember, interest rates today are close to zero, and even the extra yield on more risky assets has come down enormously. Also bear in mind that debt restructuring is supposed to be sustainable, so that future payments shouldn’t be that risky), the creditors were asking Argentina to pay a huge premium for the right to postpone. While the subsequent offer from the group headed by BlackRock was better, it was still 50 percent over what the IMF said was sustainable, and if correctly valued (using, say, a 5 percent discount rate), represented minuscule relief for the country.

There is a lot of speculation about why Argentina’s creditors are acting in such an obdurate way, first not negotiating in good faith, then making offers that are so out of touch with reality—delaying tactics that eventually forced a technical default on May 22. Don’t they know the only choice is between an orderly restructuring and a disorderly restructuring? Turmoil in emerging market bonds will be particularly costly to many of the creditors, who own not only Argentinean bonds but bonds of many other countries, too.

Creditors like BlackRock are supposed to be masters of risk analysis. Don’t they know the risks of asking what’s beyond what’s sustainable? The irony is that the head of BlackRock, Larry Fink, in his famous open letter to CEOs, rightly emphasized the importance of sustainability: “…with the impact of sustainability on investment returns increasing, we believe that sustainable investing is the strongest foundation for client portfolios going forward.” But while he was focusing on long-term environmental sustainability, the same could be said even more forcefully for economic sustainability.

Is it that the creditors are just slow to adjust to this new world, hoping that if they play hardball long enough, it will go away? Maybe they’re worried that if they’re soft on Argentina, they’ll wind up having to settle for less in the rash of restructurings coming down the line. Perhaps Argentina is being forced to pay the price so its creditors can maintain their reputations as tough guys without much humanity.

Debt crises have, of course, been a feature of the global financial system for the past four decades. In what may be an apocryphal story, the lead negotiator in an earlier crisis was Citibank’s legendary Bill Rhodes. At some point, when creditors were playing their usual game of financial brinkmanship, Rhodes supposedly said, “OK, it’s enough.” Today we seem to be missing a leader in the financial community who can play that role. Someone who understands the realities of the pandemic and the new financial order.

If this were a story just about Argentina, it would be interesting enough. But this is also the story of 21st century finance capitalism. It’s not too late for the story to have a happy ending. I hope it does.