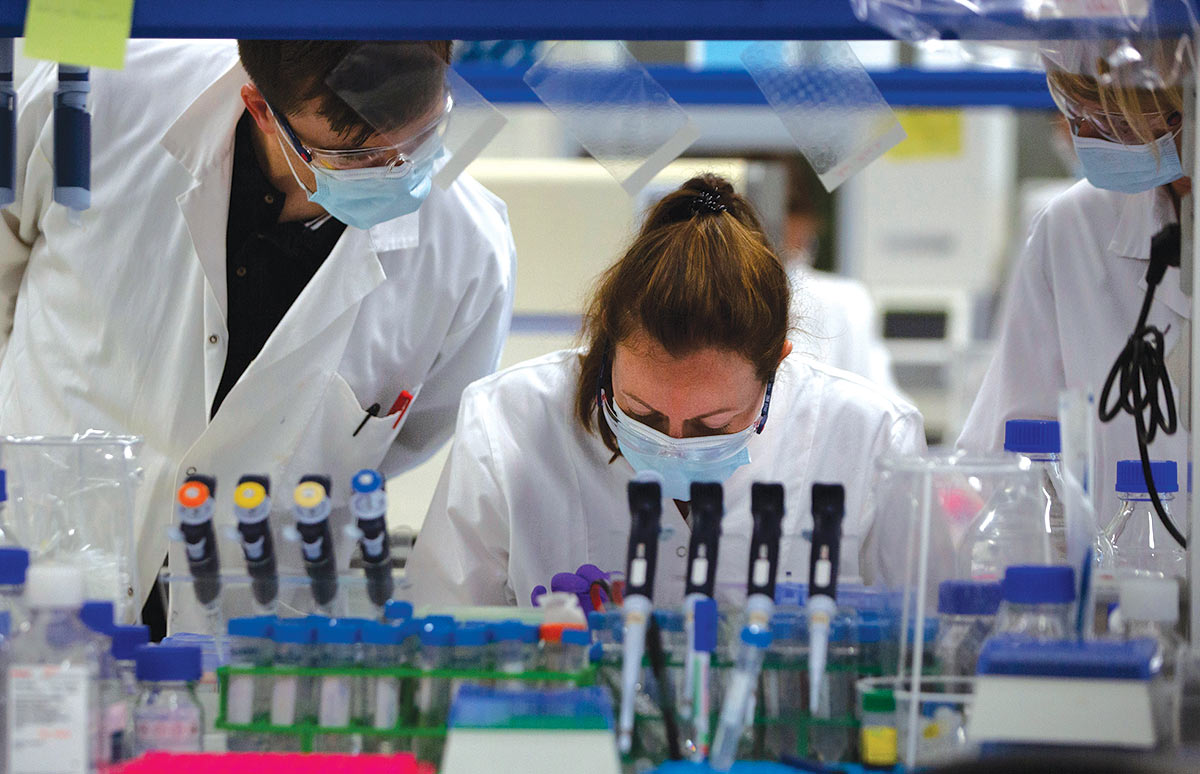 In the throes of the Covid-19 emergency, almost all of New Jersey’s state universities, like many university research centers across the country, have halted in-person functions—except for work on the pandemic. And rightly so. This is a dangerous public health emergency that requires large-scale shifts in how we live and work until we get it under control. But it also requires an institutional response that matches the scale of the problem.

As a Covid researcher, I’ve had the responsibility of taking on new, fast-paced research of urgent public concern. My department has been involved in a number of projects related to Covid, including investigating a molecule made by deep-ocean bacteria that could be developed to treat the virus’s symptoms. But I’ve had to do it without sufficient support from one of the country’s largest research institutions. And my situation pales in comparison to that of the vast majority of my graduate student colleagues at Rutgers. I’m one of the lucky ones.

According to surveys by the student government of graduate students at Rutgers New Brunswick and Newark, where the overwhelming majority of doctoral students study, two-thirds of PhD students at Rutgers report research delays that will necessitate their taking at least one more year to complete their dissertations and produce innovative work. In my department, nearly every lab has been closed. Many of us are on tight deadlines. And with only a short window in which to receive university funding, graduate students worry that we’ll be unable to complete our research in time.

Even the lucky few who have work that can be performed remotely are no longer able to access vital campus resources. Personal computers present unique challenges of security, connectivity, and strength. Because much of our data is inaccessible on private computers in order to maintain the safety and quality of our research, we have to be on-site. Many of us use molecular or culture-based techniques—for that, people need to be in the lab to, for example, give nutrients to bacteria to keep them alive. And even if we use computers for our research, that data is based on physical samples that we need to grow, extract what we need from, clean, verify their purity, then sequence. None of this is possible at home. As things are now, we are unable to continue our work and have no clear sense of when we will be able to resume.

Without new research, we cannot seek the sources of funding that enable our work, including competitive outside grants from major funders, such as NASA or the NSF. It is a common practice for such agencies to fully fund a project only after researchers complete a high-risk, high-reward initial effort to demonstrate proof of concept. As we cannot generate new data, we are unable to accomplish the early-stage research we need to get funding. Such resources are key not only to our research projects’ completion but also to our ability to progress in our fields and make Rutgers a center of innovation.

Across the country, this situation is even worse for graduate students in earlier phases of their research or in other disciplines.  “It took me months and months to get the lab set up, and I’m now looking at the possibility of redoing that,” Melissa Kane, an assistant professor of pediatrics at the University of Pittsburgh’s school of medicine, told Inside Higher Ed. “It’s going to be a lot harder for junior people to get back up and running.” Sunny Shin, an associate professor of microbiology at the University of Pennsylvania, told the same publication that with experiments suspended, her lab had to euthanize three-quarters of her lab’s mouse colony. “I estimate that this will set my lab’s research back at least six months, if not more, as we don’t know when we’ll be able to go back into our labs again.” Cullen Taniguchi, an assistant professor at University of Texas MD Anderson Cancer Center, told STAT news that early-career researchers will be the most vulnerable in the shutdown’s aftermath. “We may lose a whole generation of researchers because of this,” he told the science and medical news website.

Those whose research is dependent on new samples from distant or difficult-to-access locations or clinical trials have it even worse. With travel, in-person interviews, and clinical trials all on hold, much research simply cannot happen. Many social scientists and humanities scholars require long stays in the field or extended archival work. Any research involving humans has been nearly impossible for a whole semester. These conditions are unlikely to change over the summer and into the fall.

Any long-term projects planned for this semester or over the summer cannot move forward, resulting in month-to-year-long delays in the beginning of new work or completing existing projects.  The last time one colleague was able to grow the bacteria they need for their work was early March. “My aim of defining this new species has been on hold for four months,” he said. “Since I can’t produce any data, I have nothing to analyze, so I’ve been, with regards to finishing my PhD, sitting on my hands since then.” He and many others have lost precious time that must be made up. And administrators know that. For many of us, the only solution is to extend our time at Rutgers, meaning spending a full seven or eight years to complete the PhD. The alternative is to lose grant funding or drop out.

Thankfully, on each of the three campuses, deans have already loosened timeline limits for PhD students. But simply allowing us to spend more time at Rutgers to complete our projects isn’t enough. Without financial support, more time is essentially meaningless. It is imperative that the university, with the aid of the state, extend graduate student funding across the board for at least one year. If we do not support our graduate students now, then we will all but ensure that an entire generation will be left behind.