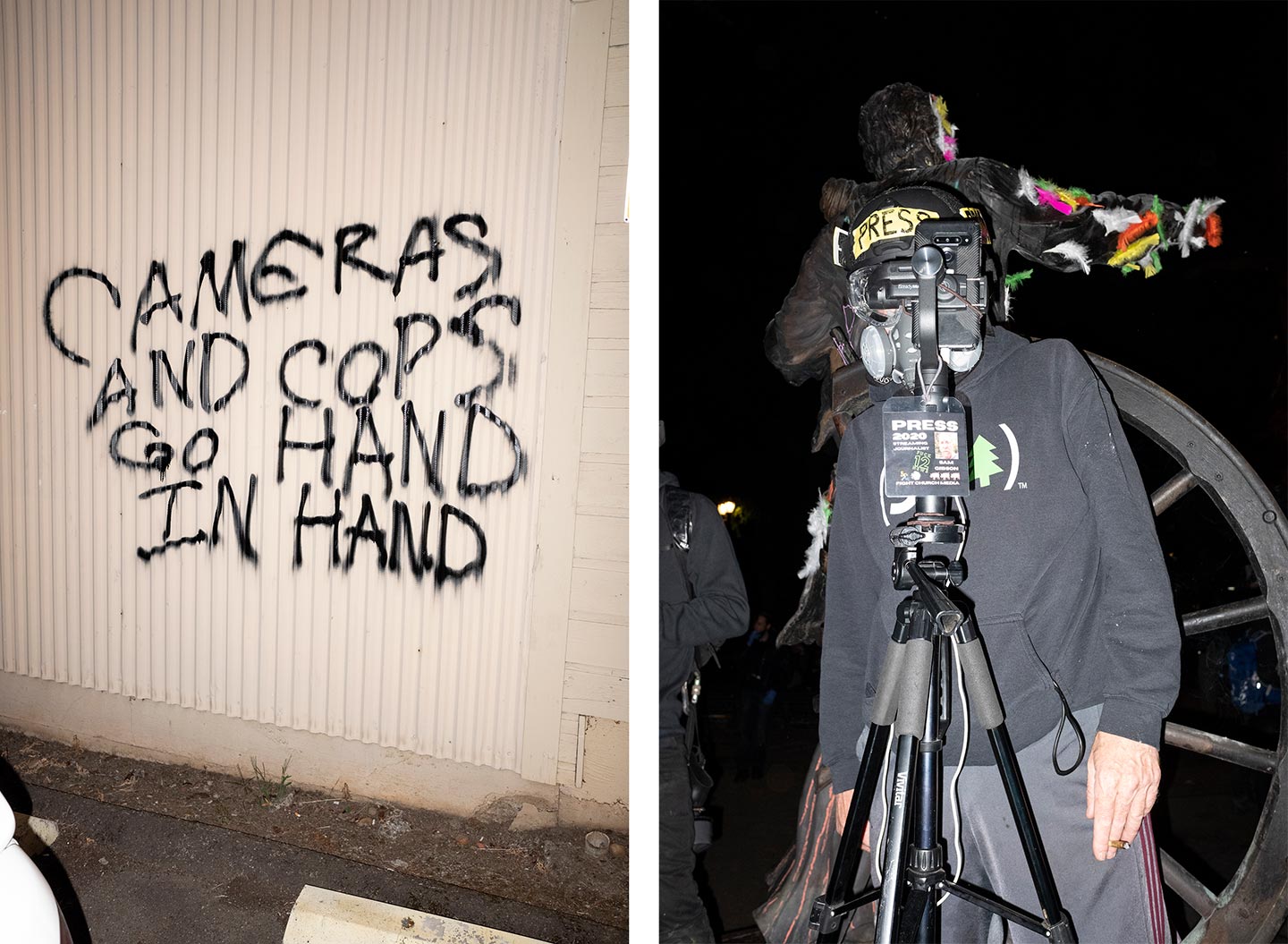 Portland, Ore., has spent the last several months uncomfortably thrust into the national spotlight. After the killing of George Floyd, protests erupted here just as they did across the country, with thousands of people flooding the streets, demanding police accountability and racial justice. But when federal police began clearing the streets around a federal courthouse downtown in July, making arrests and shooting off wave after wave of tear-gas canisters, Portland became an epicenter in a battle over freedom of protest and government might, with the whole country’s attention turned to its streets.

I started photographing the protests on May 29, and I wasn’t alone: Besides the professional news media, the protests have been documented by amateur photographers, YouTubers, indie filmmakers, and smartphone-wielding activists sporting homemade “PRESS” badges. At times, it feels like half the people at any given event are carrying cameras, steadily streaming or documenting for their audiences. 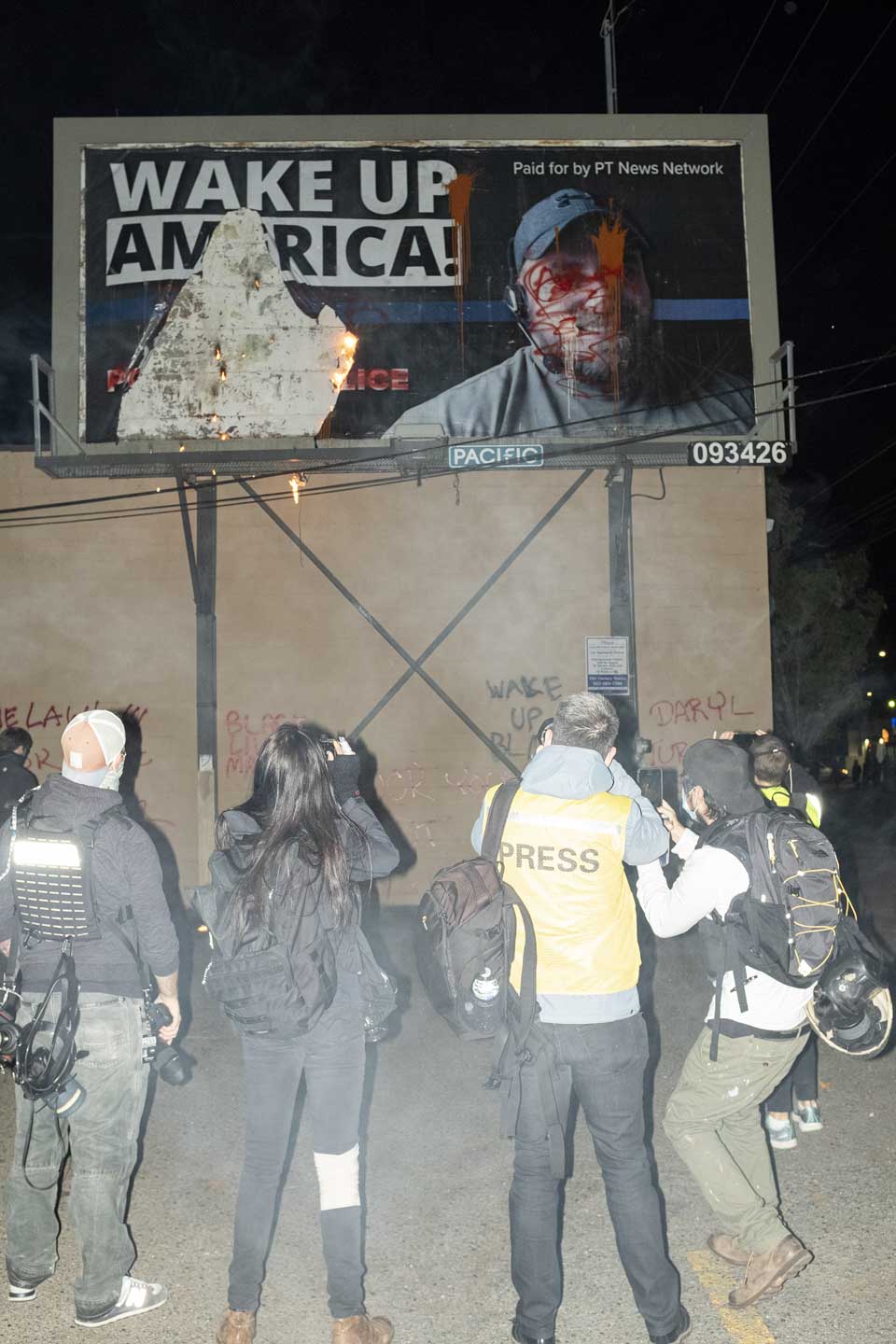 Members of the media photograph as a pro-cop billboard, paid for by a conservative news network, is vandalized and set on fire by protesters outside the Portland Police Association, October 19. (Rian Dundon)

The arrival of federal police only intensified this: The population of photographers ballooned, and their nightmarish visuals of camo-clad agents taking aim at unarmed protesters were shared on social media and across the Internet. News crews often couldn’t get close enough to the action because of safety concerns, so a lot of the footage we saw from the summer’s pitched street battles was that of citizen participants, activist streamers, or local freelancers—a tangle of masked observers that made it hard to determine who was who. A cottage industry of semiprofessional streamer crews with names like Concrete Reporting and AssfaultPirates emerged, along with paranoia as word spread that the feds were using livestreams to identify protesters. Filmers that the protesters considered to have a conservative bias, or suspected of being police informants, were routinely set upon and ejected from demonstrations. Members of the press struggled to reconcile subjects’ privacy concerns with the demands of breaking news reporting. The visual nature of the protests combined with the sheer number of cameras contributed to a layering effect, as if every image were now a picture about how pictures were being made. 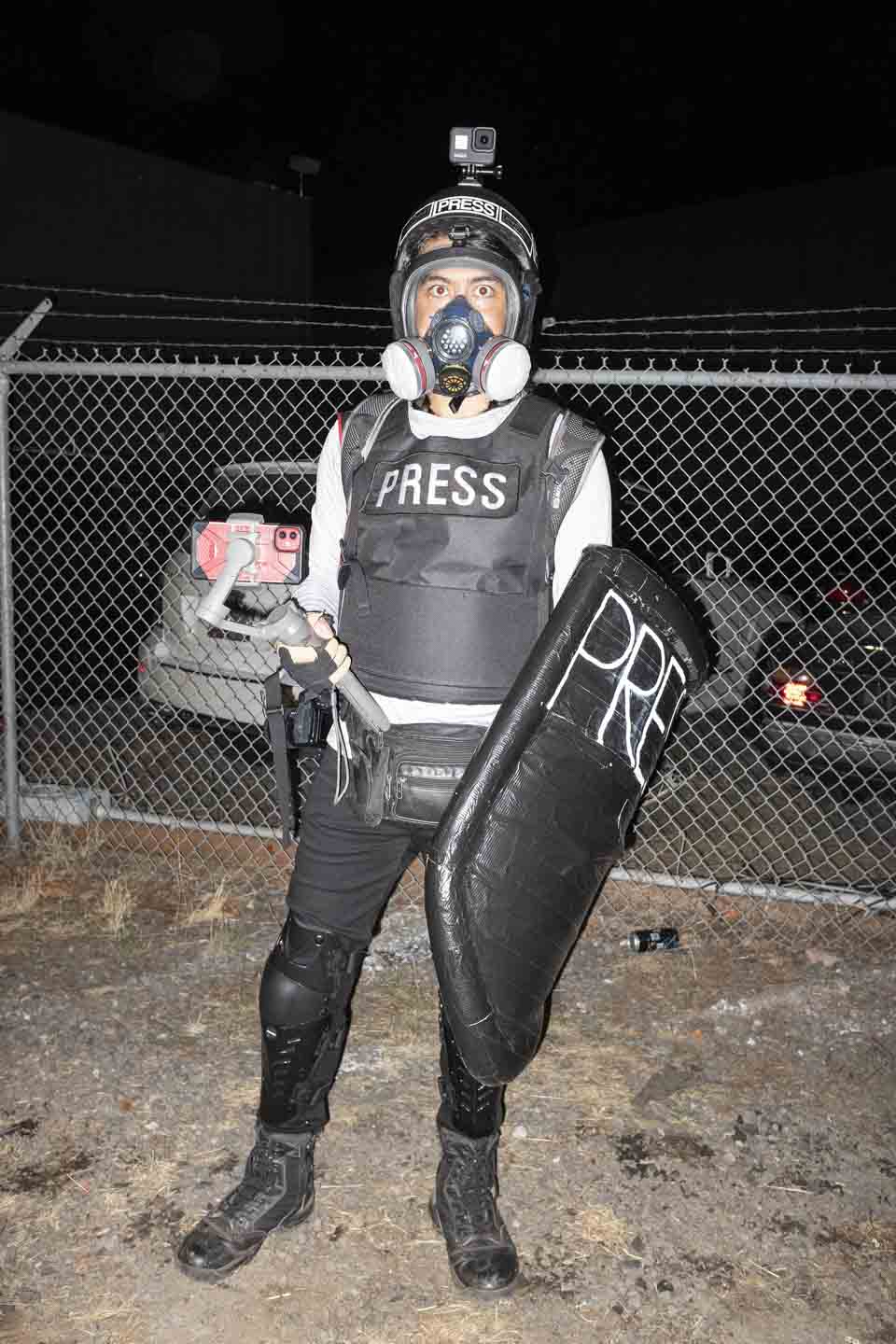 An activist videographer during demonstrations outside a ICE detention center, August 19. (Rian Dundon) 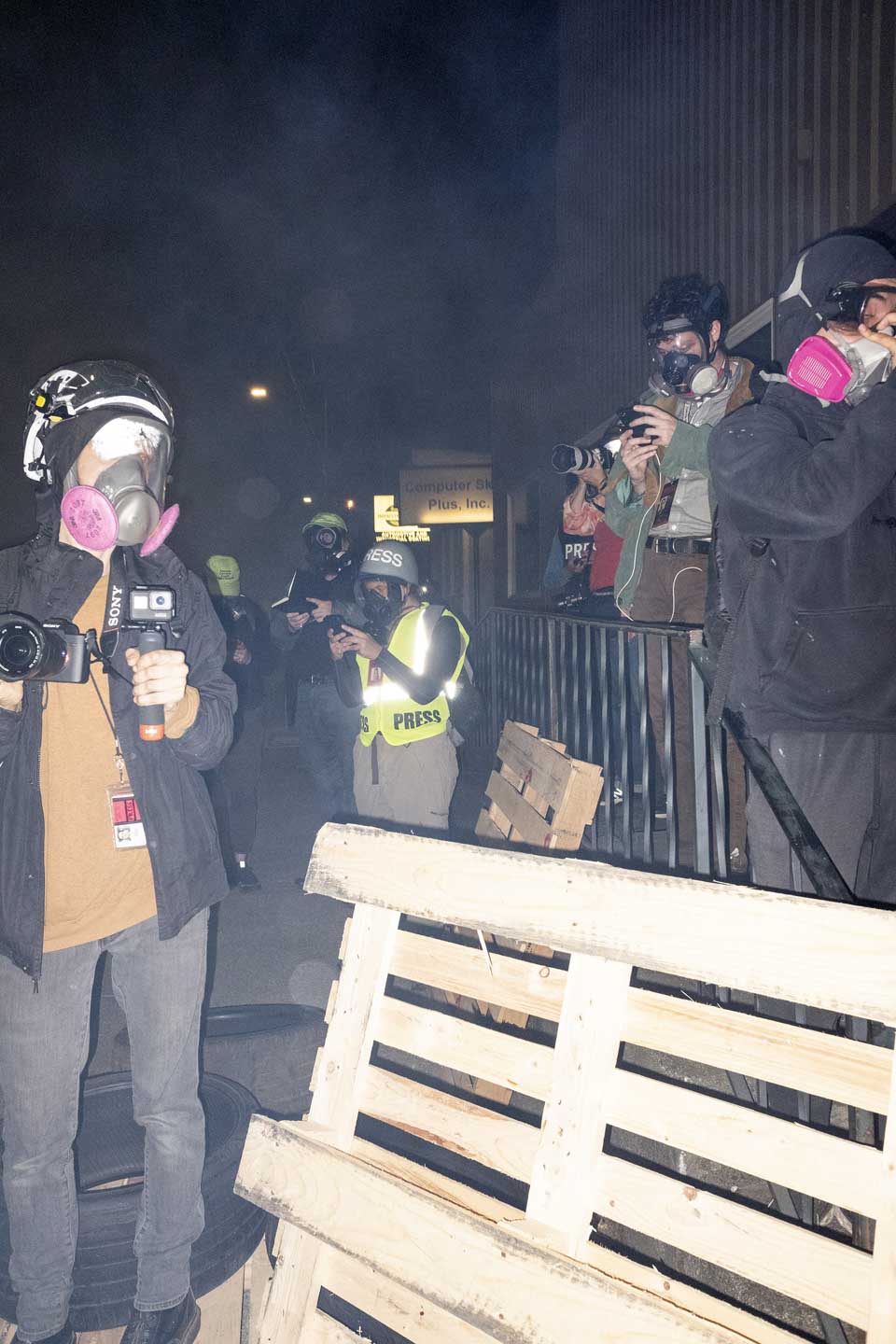 A group of protest photographers gather on the corner of SE Stark and 117th Street while police deploy tear gas nearby, September 5. (Rian Dundon) 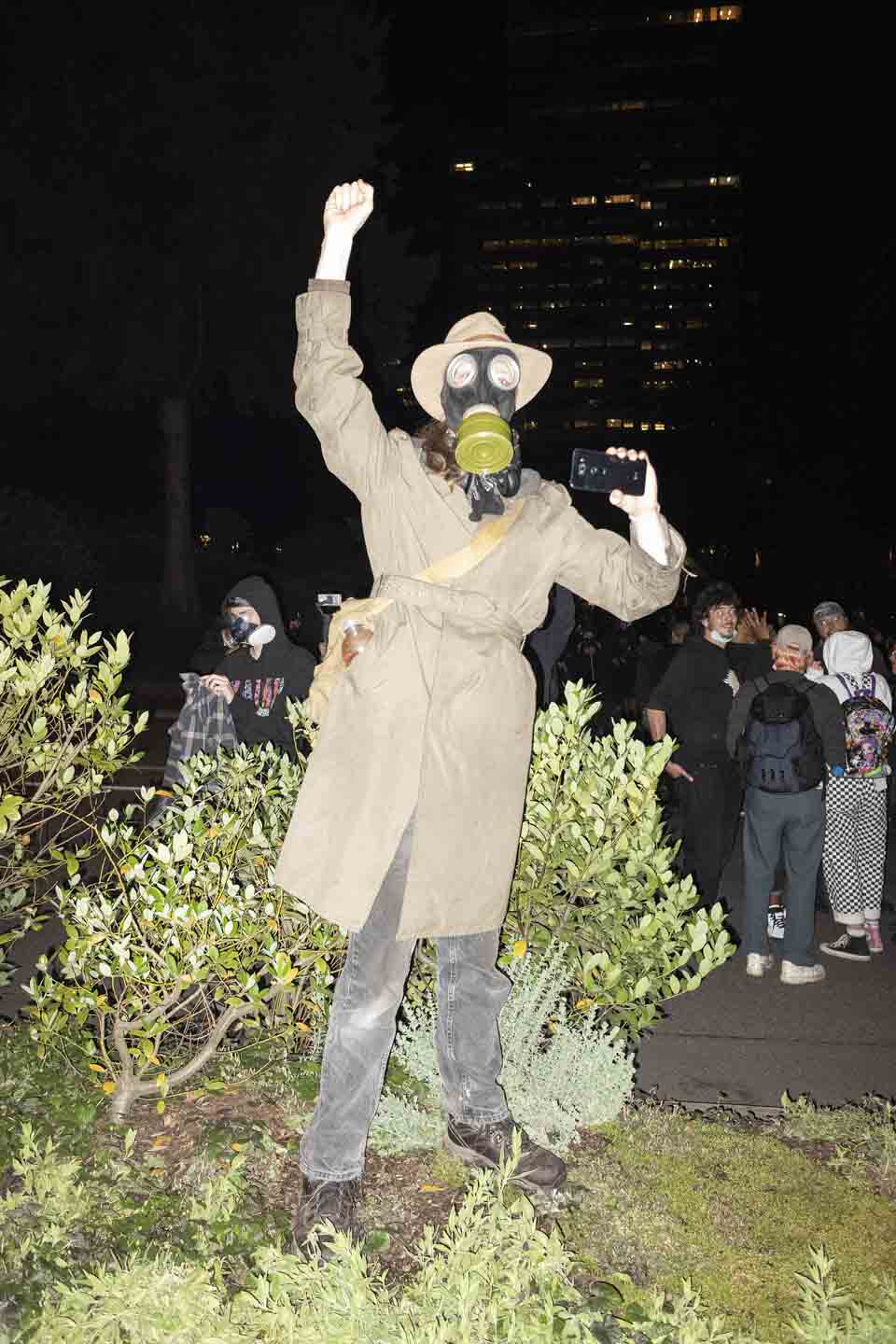 One night in late July, I found myself on the other side of the lens after being knocked to the ground by an overeager US marshal. An Associated Press photographer was there, and his dramatic photo of my hunched frame rising from a cloud of tear gas ran in newspapers and magazines around the world. By August, Portland was an unlikely epicenter of the national conversation around racial justice, and images were part of the reason. The pictures depicted spirited resistance to police aggression, but they also recorded far darker moments. When Patriot Prayer supporter Aaron J. Danielson was shot dead in late August, cell phone footage captured the shooter, Michael Reinoehl, in the act. I had seen Reinoehl at previous protests and had photographed him on several occasions. Reinoehl was eventually tracked down and killed by US marshals after giving an interview to Vice News. 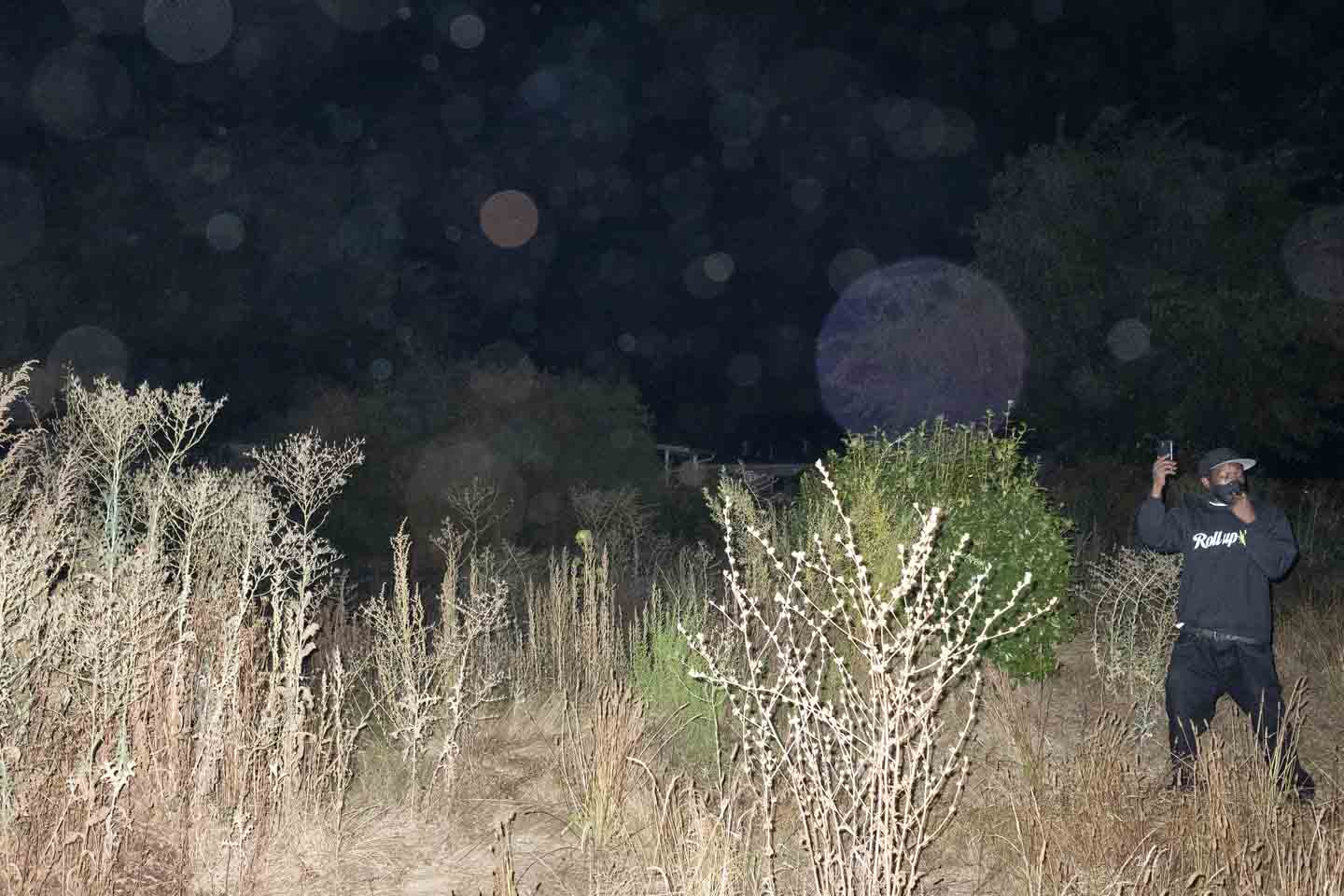 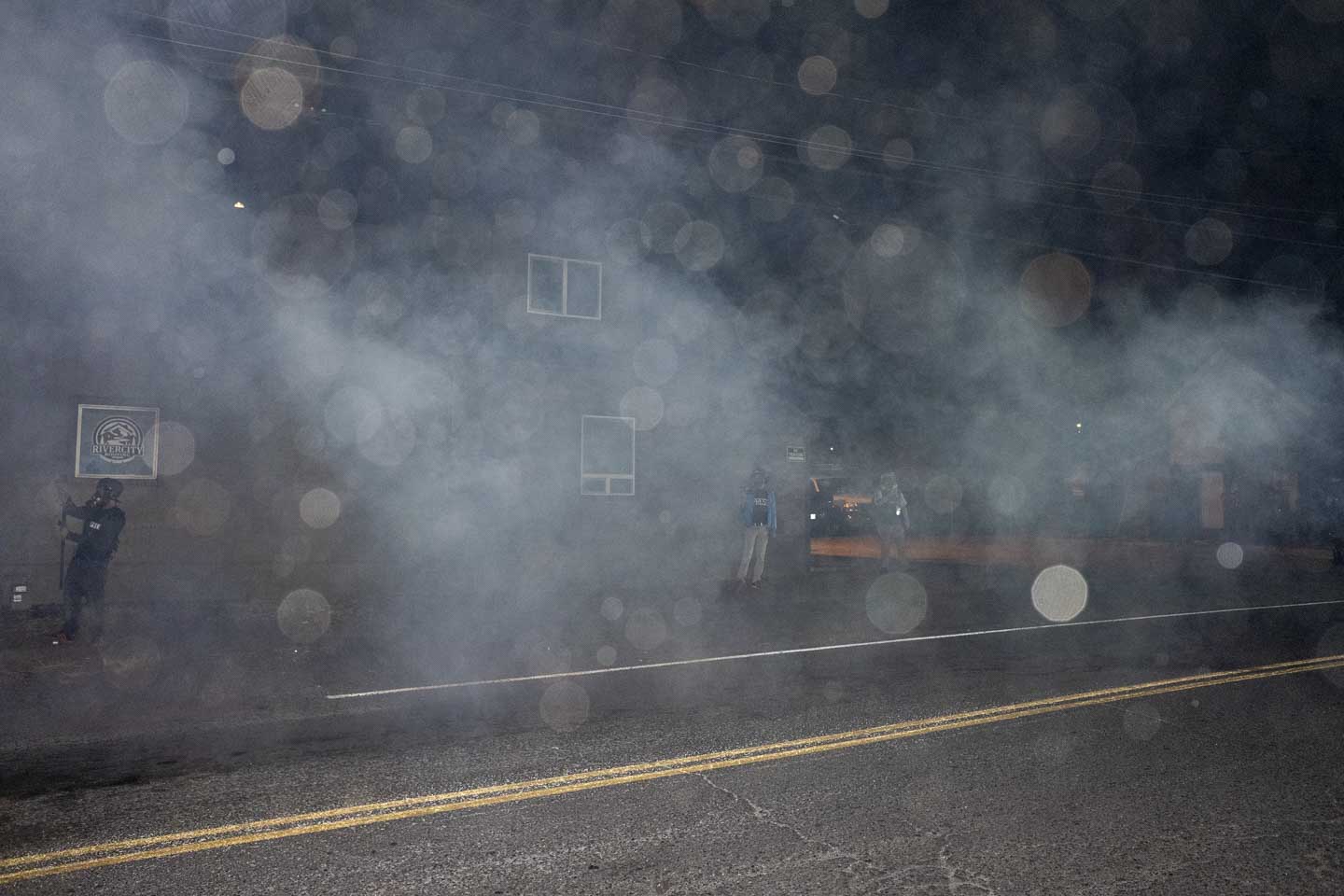 In 1961, historian Daniel J. Boorstin coined the term “pseudo-event” to describe how politicians and the media were using spectacle to compensate for consumers’ shrinking attention spans. People didn’t want to wait for news to happen anymore—they wanted it ready to go when they sat down with the morning paper, with regular updates on the radio as they drove to work. Boorstin noted these “extravagant expectations” while lamenting the way culture had responded with a fog of news and information designed less to inform than to fill space. Media events—those concocted for easy visuals and quick publicity—were those that blurred the lines between performance and truth. 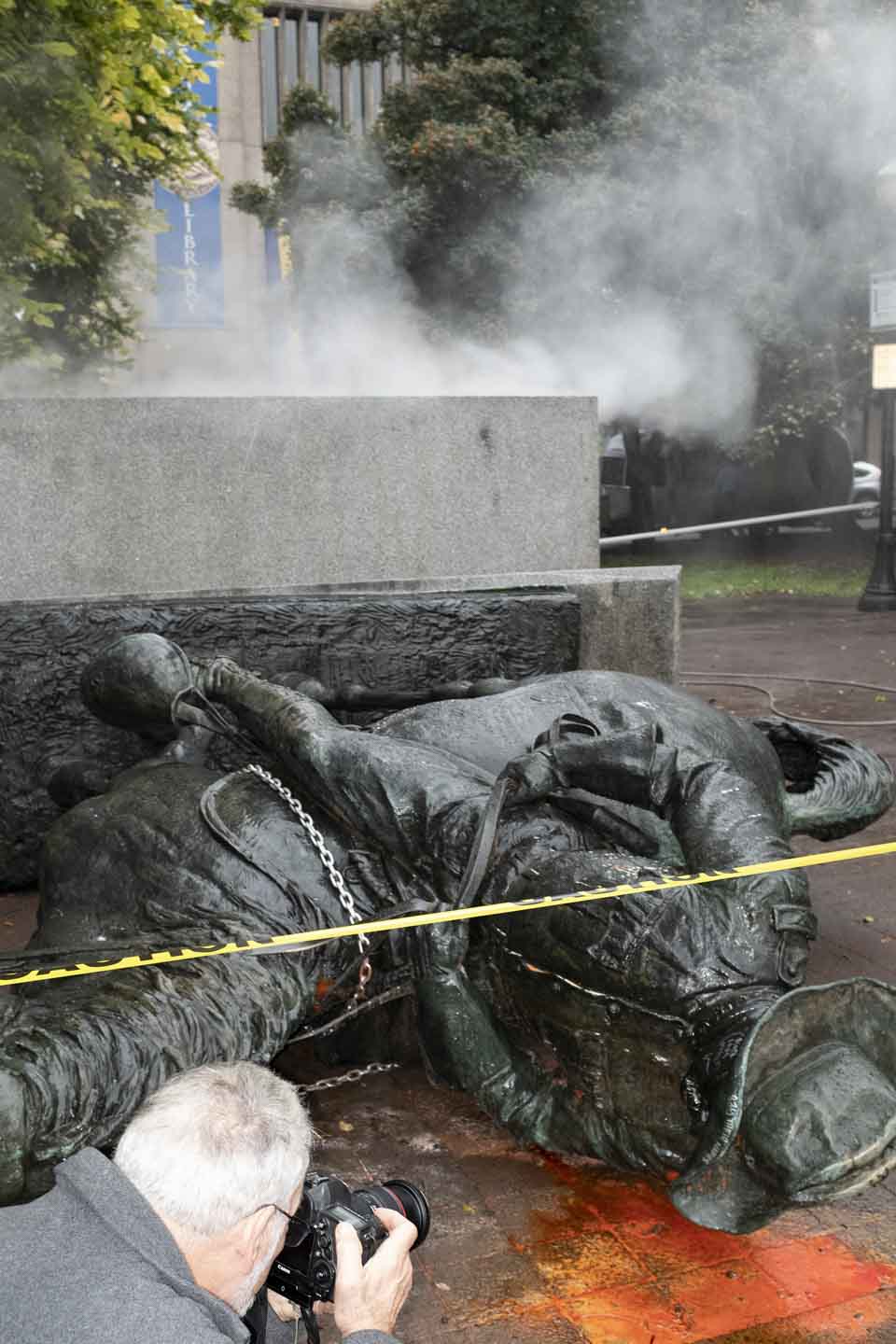 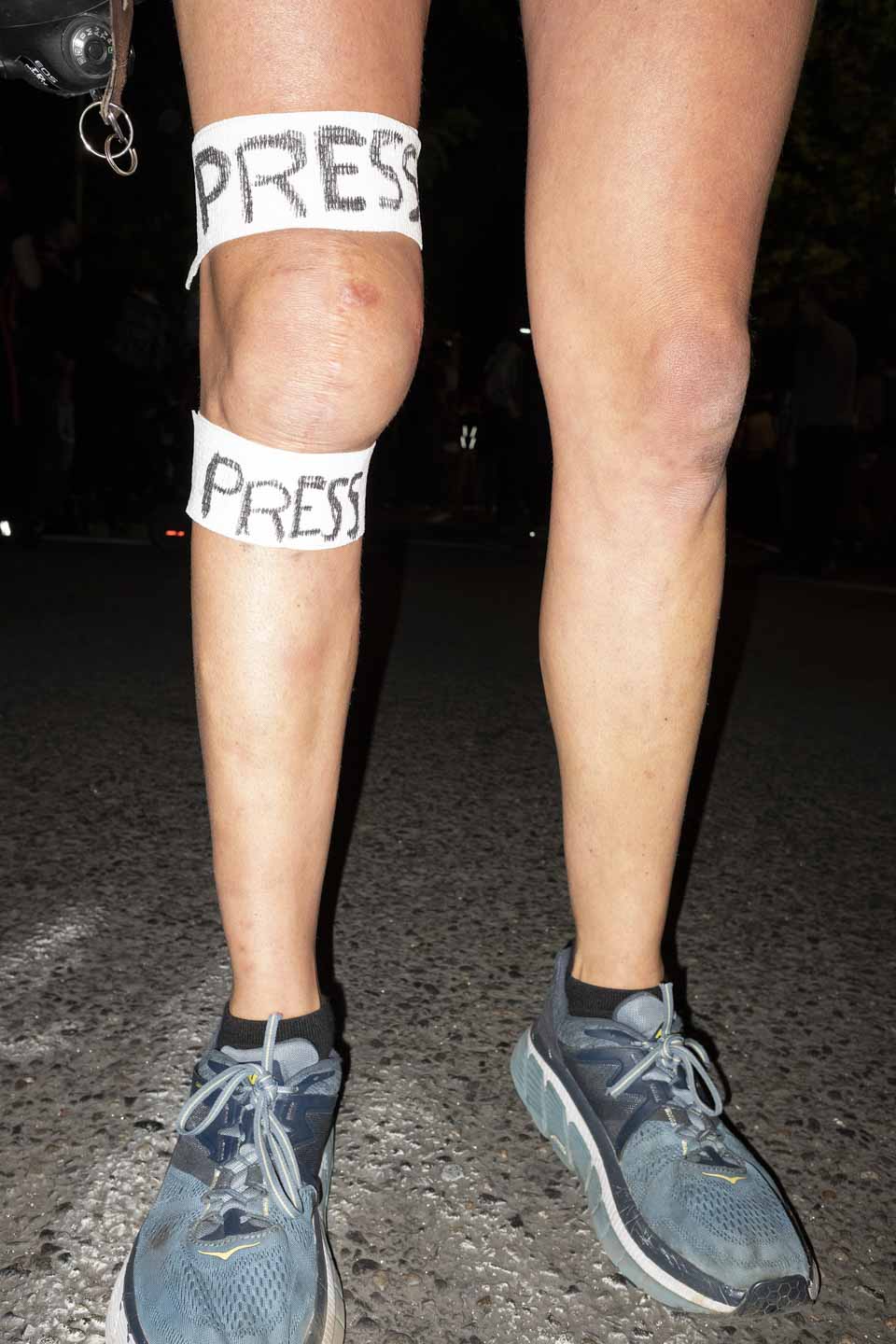 This photographer was injured in the knee after police fired impact munitions at a Black Lives Matter protest on July 30. (Rian Dundon)

Sixty years later, everyone knows that images manipulate, and technology continues to provide new and easier means for their delivery. While the unmediated nature of independent journalism and the immediacy of livestreaming aim to provide information unfiltered by traditional media gatekeepers, the type of information that reaches us is increasingly shaped by algorithms outside our control. Whereas Boorstin was contending with the postwar designs of corporate media and advertising, today’s multilayered “thicket of unreality” is far harder to parse. Social feeds have splintered the news into infinite versions of itself, each tailor-made and customizable for individual viewers. Modern political demonstrations to some extent exist to provide content for the parallel battle online, and everyone—from the left to the right, and even the police—use images to support their side of the story. Livestreamers, tweeters, and others of their ilk are seen by their followers as intrepid reporters who take on the mantle of truth to bring back pictures the mainstream won’t show. In Boorstin’s prescient words, “The story of the making of our illusions—‘the news behind the news’—has become the most appealing news of the world.” 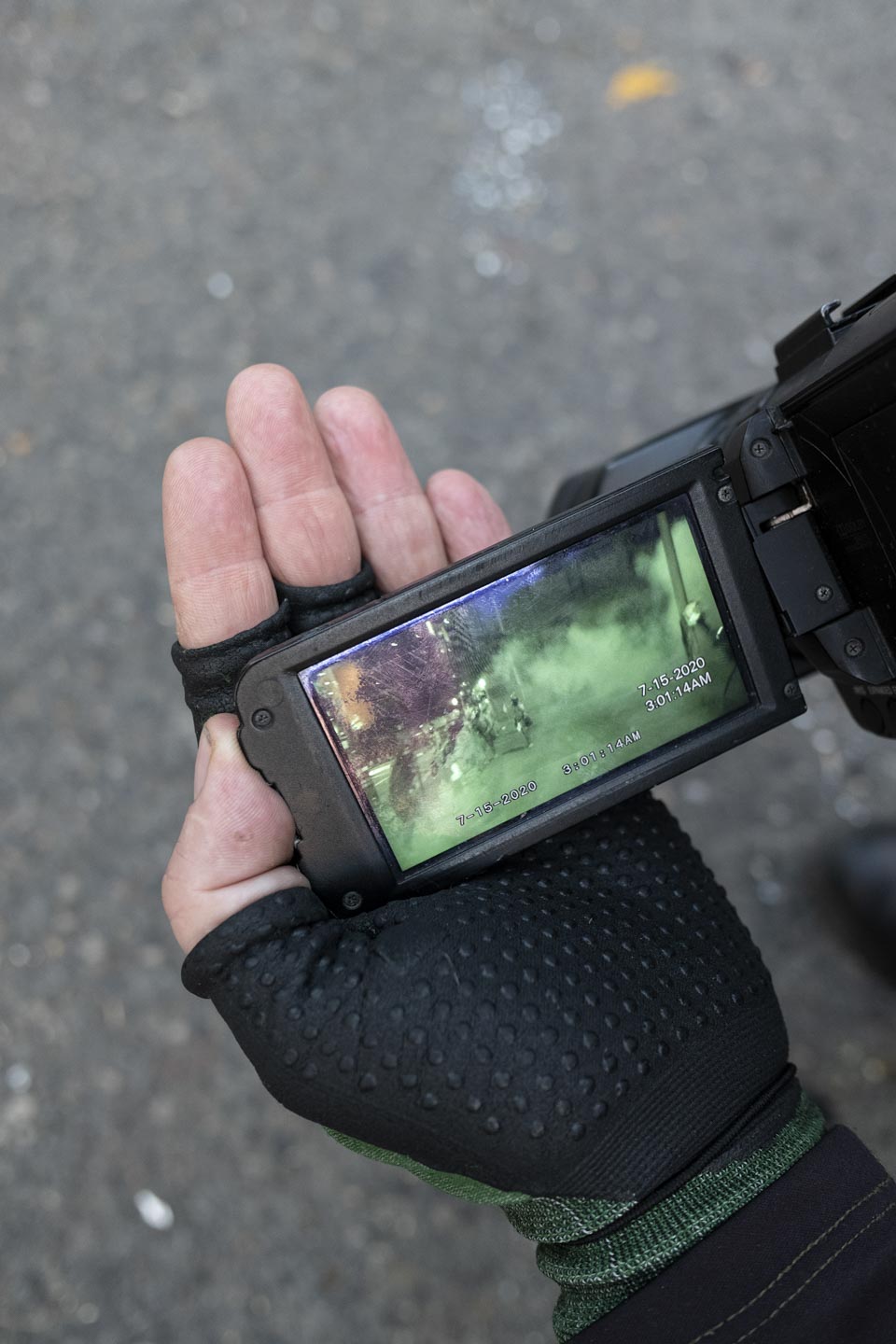 A videographer reviews footage of US marshals using tear gas to clear a protest encampment the night before, July 15. (Rian Dundon)