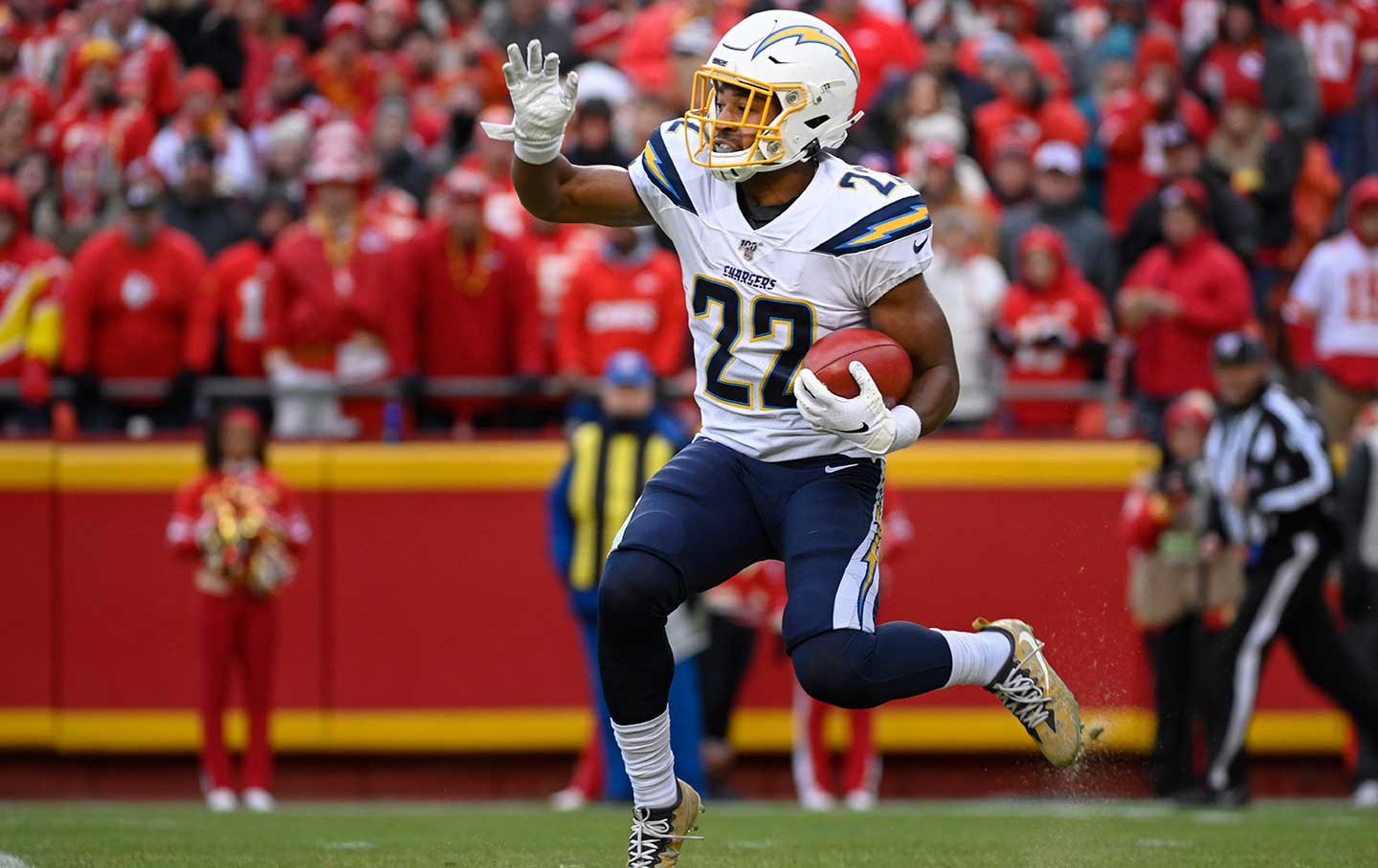 Justin Jackson is a 24-year-old running back for the Los Angeles Chargers of the National Football League. He has also emerged on social media as a proud defender and advocate for the candidacy of Bernie Sanders. Here is a section of an interview that Jackson did with The Nation on our Edge of Sports podcast. To listen to the interview in its entirety, travel to this link.

Dave Zirin: I want to read some of your tweets to you: “We can drone strike a foreign leader from the sky with a death robot all the way in Iraq, but we can’t get clean water pipes under Flint.” You also cited the costs of war and wrote, “yet somehow, cable news has the gall to ask how [Bernie Sanders will] pay for free college and a less expensive healthcare system. Oh and by the way, war is a racket, but you already knew this.” You have clearly made a decision to let your political flag fly. What has spurred this?

Justin Jackson: I don’t think there was one particular event or anything. I’ve been doing a lot of research on these topics. I don’t try to talk out of my ass. I like being educated on the things I’m speaking about. Our season just ended not too long ago, so I have a lot more free time. I just didn’t have a lot of energy to expand more upon that. I have done some tweets in the past. None of them really blew up like the ones recently did. But obviously, these blew up and a lot more people paid attention to what I’ve been saying. I don’t think anything I said was really super controversial. These are pretty much widely known truths, but not necessarily spoken about in the corporate media or among the corporate elite. So that’s why it’s almost like this shock factor, even though these are, in my opinion, widely held truths.

DZ: You’re obviously a very political person. Everybody’s got a political origin story. I was hoping you could share some of your origin story with us.

JJ: For me, it really was the 2016 election. I was 18 years old, a freshman at Northwestern and it was a huge four years of my life. I learned a lot and really grew up. The great thing was that I was on a team of very intelligent teammates. A lot of us were very socially conscious, maybe not super politically conscious, but very socially conscious. We had a lot of conversations in the locker room about these kinds of things. There really were people from all walks of life, all different parts of the country, different socioeconomic backgrounds, racial backgrounds, all that type of stuff. It really was interesting because it really was a microcosm of the United States. Having those conversations, we really got to hear a bunch of different sides, ideologies, and different takes on issues. A lot of times, we had situations where people don’t agree and have an actual discussion about this stuff. A lot of times when those discussions would go on, I found myself still advocating for the disaffected amongst us, but I was politically not being able to do as good as I wanted to. I wasn’t coming from a position of historical and political knowledge, where I could actually put concrete, hard evidence to certain policies or certain candidates.

DZ: When precisely did you decide to put in the work to learn the politics to be able to debate?

JJ: It was after the [Democratic Party] primary. I didn’t really know who Bernie was and it was already down to Hillary or Trump and I found myself, obviously, advocating against Trump because I didn’t agree with not only his political ideology but his rhetoric. But I couldn’t find any knowledge as to why I should be advocating for Hillary, so I really had to do a lot of research on that. When I watched cable news at that time I thought, “Let me watch MSNBC, CNN, ABC, whatever,” trying to educate myself on this, but they weren’t talking about any type of policy. They weren’t talking about anything of substance. It was about Trump’s tweets. I wanted to know how to advocate for a candidate. So that’s when I found myself going to alternative, independent news sources and YouTube. The first one I found was TYT [The Young Turks]. They had 20-, 30-minute segments on policies: on critiques of Obama, critiques of Clinton, critiques of Trump, like actual policy-based critiques. I found myself more into learning about this stuff. That was how I got into the political discourse and political histories.

Fast forward three years later, I’m much more educated on these issues. I call myself a progressive and a Berniecrat. In 2016, I didn’t know about him in the primary and I would’ve advocated for him, had I known. That’s why I’m trying to advocate for him now. Bernie’s policies, I think, work well around the world and would work well here. The only reason they are not implemented here is because of corporate money and really the corruption of both parties. It’s a case of the moneyed interests over the people.… I think the moment we’re in right now, as a country, where we see the student debt crisis, we see the health care crisis, we see the climate crisis, all these crises, coming to a head. I just personally think that whether you get four more years of Trump or you get a milquetoast neoliberal alternative for four years, we’re heading off a cliff that I don’t know if we can really recover from.… I think as a whole, America would be in a really, really tough spot if we don’t get some progressive leadership to quell some of these crises that we are finding ourselves in, because of 30, 40 years of neoliberalism that has just really brought our country to the brink.