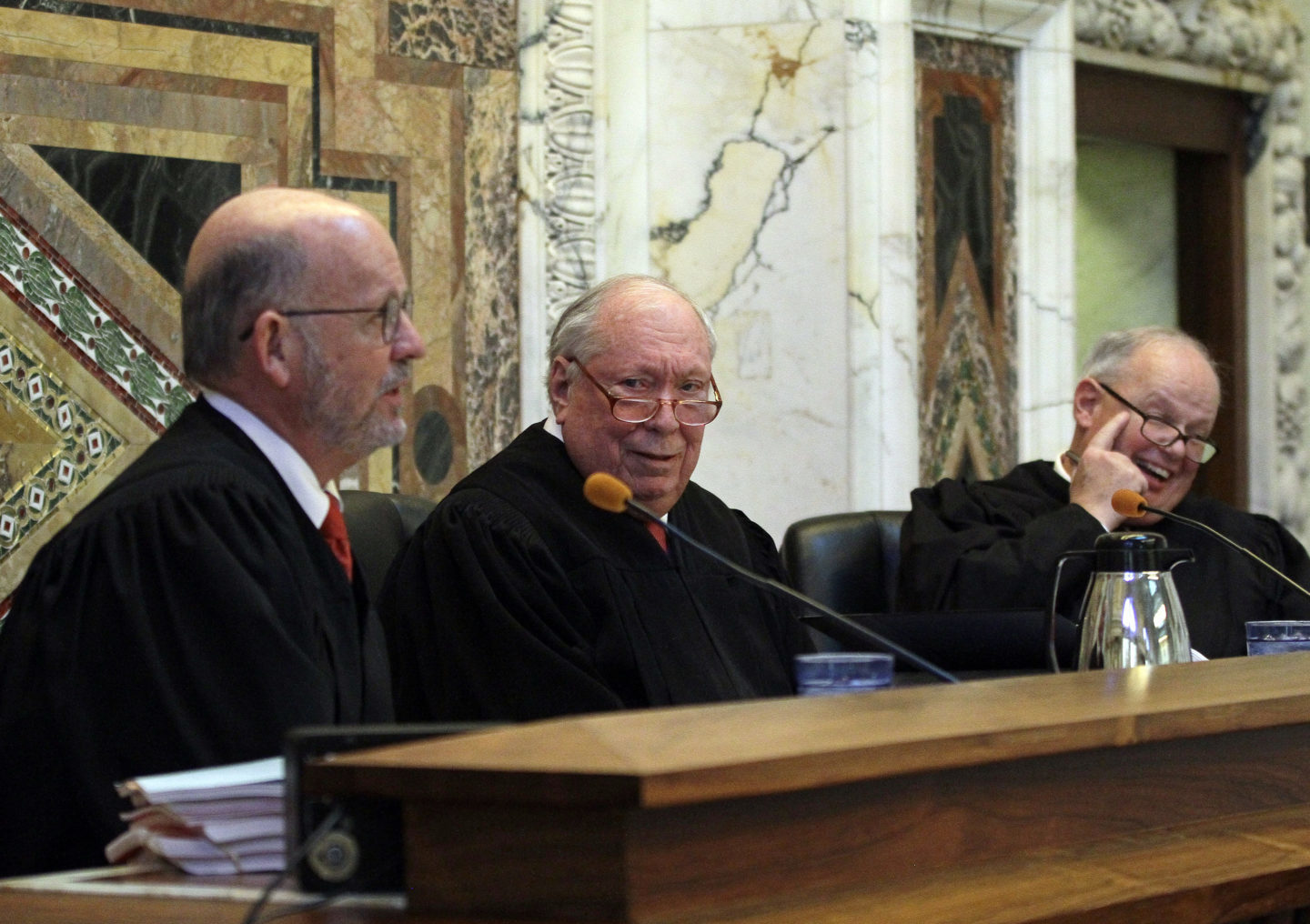 The age gap between federal judges and their clerks is a little bit like the gap between Leonardo DiCaprio and his girlfriends: No matter how old the former gets, the ages of the latter stay the same.

Clerking for a federal judge is one of the most prestigious jobs in law. Clerks usually serve only one year. They work closely with their judges—long hours and lots of late nights—conducting legal research, summarizing briefs, and helping them to form and write their opinions. Clerks who do well and get strong recommendations from their judges are able to clerk for a higher court, including the Supreme Court, and are on the fast track to law professor positions, high-paying jobs in private practice, or becoming a federal judge themselves. Because of those opportunities, clerkships are highly sought positions. And they often go to 25-to-30-year-olds who are straight out of law school and don’t have a lot of work experience.

If it sounds as if I’ve just laid out a perfect scenario for abuse and harassment, I have. Federal judges are appointed for life and can be removed only after an impeachment conviction by the US Senate. They receive a fresh batch of young, ambitious lawyers every year who don’t need to sign a nondisclosure agreement to learn how to keep secrets.

Very little has been done to root out abuse and harassment in the federal judiciary. Last month Kansas District Court Judge Carlos Murguia became one of the few judges in the #MeToo era to face anything approaching repercussions for his behavior. On February 18 he resigned from his post, effective April 1, under a cloud of allegations regarding sexually inappropriate conduct, joining former Ninth Circuit judge Alex Kozinski, who resigned in 2017.

The Murguia case illustrates the flaw that has largely allowed the judiciary to escape accountability: Judges are policed by their colleagues. In 2016 one of Murguia’s former employees made sexual harassment allegations against him, which were reported to the then–chief judge of the District of Kansas, J. Thomas Marten. A few weeks later, Marten elevated those complaints to Timothy Tymkovich, the chief judge of the 10th Circuit. Tymkovich is the same guy who threw out 83 ethics complaints against alleged attempted rapist Brett Kavanaugh, claiming to lack the power to do anything about them. In this case, Tymkovich started an “informal investigation,” whatever that means. He ended up referring Murguia to medical treatment for sexual harassment. Not long after, Murguia was declared cured by a certified medical professional, but in late 2017 more allegations surfaced, including the claim that he had an extramarital affair with a felon on probation. That led to a real investigation, which found in September 2019 that he’d committed judicial misconduct. The details were released in early March.

Though not sufficient, there have been a handful of #MeToo reforms in the judiciary. Last year a commission led by DC Circuit Chief Judge Merrick Garland (yes, that Merrick Garland) came up with a number of new rules, such as making it explicit that “unwanted, offensive, or abusive sexual conduct” is against the judicial code of conduct. Most of the rules focus on making it easier for victims to report misconduct allegations while requiring judges to elevate “reliable” information about the misconduct of their fellow judges.

The problem is that, even with more reporting, all of these complaints eventually end up on the desk of the chief judge of the circuit on which the alleged harasser sits. For most federal judges, in other words, it is up to a colleague to decide if an investigation will take place or any kind of discipline will be meted out. I say “most” federal judges because the Supreme Court does not even have this safeguard. Chief Justice John Roberts is said to be considering some kind of ethics rules for the nation’s highest court but has yet to put anything forward.

Trying to find reforms that will work was the ostensible reason for a hearing last month in front of a House Judiciary subcommittee. But the news at the hearing was made by Olivia Warren, a former law clerk and a current staff attorney at the Center for Death Penalty Litigation. She testified that a Ninth Circuit contemporary of Kozinski’s, Stephen Reinhardt, sexually harassed her while she clerked for him in 2017. “Mainly, he suggested I was horrifically unattractive,” Warren said. She later added, “On more than one occasion, the judge suggested with words and gestures that my husband did not likely have a penis but that if he did, he certainly would not be able to sustain an erection while looking at me.”

Reinhardt died in 2018, so he is not around to answer these charges. But Warren has the support of 70 former Reinhardt clerks who signed a letter calling on Congress to take “bold steps” to address sexual misconduct in the judiciary.

The raging problem with the way judges treat their clerks is the lack of independent oversight over the entire clerkship process. Many judges, including Reinhardt and Kozinski, were known to be “difficult” long before any allegations of sexual harassment came out. Verbal or emotional abuse is often treated as part of the price to be paid for an opportunity to clerk for a powerful judge. Even judges known to be “nice” benefit from a lack of the most basic scrutiny or accountability. Kavanaugh, for instance, has a good record on hiring women clerks but allegedly likes them to look a certain way. Justice Ruth Bader Ginsburg has a sterling reputation as a boss and a mentor, but she has hired just one African American law clerk in her 27 years on the Supreme Court.

The federal judiciary needs strong oversight by Congress, which is the only body empowered by the Constitution with disciplinary authority over judges. Judges, it turns out, are not good at judging other judges. A lifetime appointment cannot be a license to abuse or harass employees.