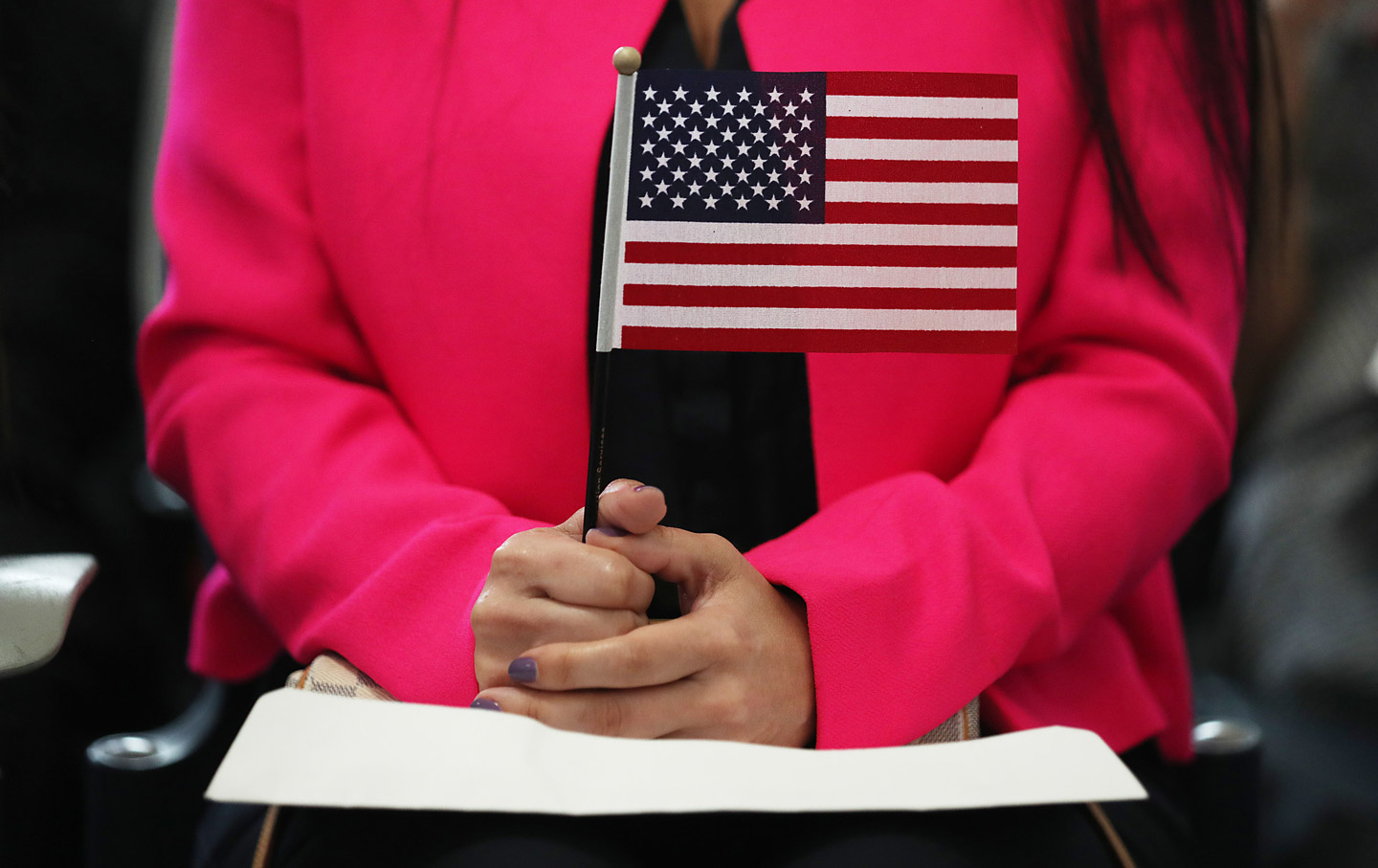 A general hallmark of immigration policy is that it’s complex. Even though many people believe that the undocumented can simply apply for residency after some period of time in the country, that’s just not true. At least, not in most cases.

Actually, there is a mechanism for those who’ve been physically present in the United States since a certain date and haven’t been otherwise rendered inadmissible by something like a criminal record to simply send in an application for permanent residency, and following that, citizenship. Known as registry, this straightforward process is so obscure that even a lot of immigration practitioners aren’t very familiar with it—because it’s essentially obsolete. To be eligible for registry, the date of entry into the United States has to be prior to January 1, 1972, almost 50 years ago.

The jingoistic tenor that has characterized the immigration debate over the last two decades belies the fact that for most of the 20th century, while policy directed at would-be immigrants was often overtly racist and exclusionary, there was a grudging consensus that it didn’t make sense to have a standing domestic population of undocumented people. In 1929, eight years after immigration quotas were first established, legislators realized that they’d painted thousands of people into a corner by creating an immigration system around them after they’d already entered.

So they established registry, which “was in the same category as a number of policies that recognize that a kind of social inclusion, or the experiential fact of inclusion, should trump any kind of legal technical disqualification,” says Mae Ngai, a Columbia University historian and author of a book on 20th century immigration policy. The cutoff date was initially set at 1921, but it quickly became clear that the program would be useless without updates.

This pragmatic recognition was neatly laid out in a 1938 report prepared by the Franklin Delano Roosevelt administration. FDR was so paranoid about immigration and enemy infiltration that he infamously turned away Jewish refugees escaping Nazism, fearmongered about the allegiance of Italian- and German-Americans, and sent Japanese-Americans to internment camps. Nonetheless, the report recommended the first update to the registry date, from 1921 to 1924, stating that it was “not in the best interests of the United States that there should be a considerable number of aliens here who have resided in this country for many years and who are otherwise eligible for naturalization and anxious to become citizens, but who are prevented from doing so because of the absence of a record.”

The date has been advanced three times since, first to 1940, then 1948, and finally 1972, where it was part of the much broader Immigration Reform and Control Act (IRCA), signed by Ronald Reagan in 1986. The registry date change was overshadowed by the bill’s other mass regularization provisions, namely a general program for those who had been present continuously since 1982 and a separate program just for people who had performed at least 90 days of agricultural work in the year preceding May of 1986.

A total of about 2.7 million formerly undocumented immigrants were regularized by these programs, but that was a one-time trade-off coupled with increased controls on hiring and funding for additional border security and enforcement. A 2014 dissection of IRCA by the nonpartisan Migration Policy Institute identifies several “cautionary lessons” in the implementation of the law’s new programs, including the fact that a 12-month application deadline following the effective date excluded many people who found out about it too late or had trouble gathering the necessary documentation.

Registry sidesteps most of these issues by virtue of its simplicity. The entire statute is just 161 words long. That’s not to say it’s free of any discrete requirements; applicants must still prove continuous residence—not always easy to do—and could be rendered ineligible by the standard inadmissibility criteria, including certain criminal convictions.

This straightforwardness stands in stark contrast to most of our contemporary policy proposals, like the 2007 Comprehensive Immigration Reform Act “that was going to make every immigrant best friends with an immigration lawyer for 20 years,” said Margaret Stock, a prominent Anchorage-based immigration attorney. “One of the problems with Congress is they love complexity over simplicity. So it’s ‘give me a 1000-page bill any day of the week,’ and if you come in, ‘so I can do the same thing in two lines,’ they’ll go, ‘huh?’”

It would really only take one of the shortest bills ever passed by Congress, merely changing the number “1972” to, say, “2010,” to suddenly make millions of people eligible for full residency. Pew Research estimated that in 2017, around 66 percent of the country’s 10.5 million undocumented immigrants had been here for longer than 10 years. With falling rates of irregular immigration, that share will only have grown, and most of them would be eligible for registration. Any way you cut it, a change to 2010 could lead to the regularization of over 5 million people.

Registry doesn’t come up much in current legislative conversations, because any such proposal would be immediately labeled amnesty—one of those terms that Democrats have become terrified of—and open-borders boosterism. Yet at this point it’s hard to imagine a proposal that wouldn’t. Efforts at immigration reform have come and gone to varying degrees of fanfare for decades now. Most proposals gaining any traction are extremely targeted—at Dreamers, agricultural workers, essential personnel—and still somehow fail to get enacted.

“When I came to the house, that [the date for registry eligibility] was just something we changed. In years past, every few years it changed just without a lot of hoopla,” former Senate majority leader Harry Reid told The Nation. “What this registry did is make things fair.”

Reid introduced unsuccessful bills that would have advanced the date of registry and made it rolling, advancing the cutoff by one year every year automatically. “I was the leader and assistant leader. We spent more time on immigration than any other one issue. I could never get it over the finish line,” he said of immigration reform generally.

According to Boston-based attorney Matt Cameron, the reluctance to bring up registry is partly a result of “this idea that amnesty needs to be some kind of redemption.… The terms of the debate have been set so that it has to be an arduous, painful path, and that’s the only way that we can get both sides to accept it.” He contrasted it to other types of legal reprieve: “When you say you have a gun amnesty, you have an illegal gun, you can turn it in without consequence. It’s not like you have to pay a penalty fee, or you have to spend 10 years apologizing for it.”

Jonathan Willmoth, a Kansas City, Mo.–based attorney, pointed to a moment in a 1980 primary debate between Ronald Reagan and George H.W. Bush when they are asked about whether the children of undocumented immigrants should be able to go to public schools for free. “They’re sort of falling all over each other to have the more humane and welcoming immigration stance,” said Willmoth. “It really turns the current attitudes of the Republican Party on its head. I mean, [Bush and Reagan were] really just diametrically opposed to the sort of anti-immigrant policies of the current administration.”

Indeed, the shifting attitudes can be seen in the thinking of someone who was involved in the last registry date advance: former senator Alan Simpson, a Wyoming Republican and IRCA’s primary Senate sponsor. His intervention was pivotal in the regularization of millions of undocumented immigrants, but, now 88 and retired, he seemed frustrated when asked about advancing the registry date. “It was done and it’s over and it ended,” he told The Nation. “If you’re trying to open up some box, bring in, under some obscure law, millions more people, while the fight is on all over America: elections coming up, you’ve got racism and you’ve got a pandemic, you’ve got people who have lost their house. You’ve got Blacks who are out of work and Hispanics who are out of work. You’re trying to open the box that doesn’t have an opening. And it won’t open. Not in these times.”

There’s a kind of irony in the fact that the registry provision actualizes the hazy notion many people already have about immigration law. “If you actually poll ordinary people and go, ‘Who should be allowed to get a green card?’ They go, ‘Well, somebody who’s been here a really long time and pays their taxes and doesn’t have a serious criminal record.’ I mean, that’s registry,” said Stock, who said she had raised the idea on a recent call with Illinois Senator Dick Durbin and members of the Biden campaign (representatives for Durbin and the campaign did not respond to requests for comment).

Proponents sometimes liken updating the registry eligibility cutoff to having a statute of limitations on immigration violations, which are civil law violations. “We have statutes of limitation on everything, except for like a handful: murder, treason, kidnapping. That’s about it. Oh, and crossing the border,” said Ngai, the historian.

While it doesn’t use up much oxygen in the broader immigration conversation, registry hasn’t been completely forgotten. Tom Jawetz, former chief counsel on the Immigration Subcommittee of the House Judiciary Committee and now vice president for immigration policy at the well-connected Center for American Progress, said that CAP supports a date advance, though it doesn’t believe there’s “a single magical bullet to approach legalization.” He added that he hoped “legalization is properly understood as an essential component” of any forthcoming legislation meant to address the impact of Covid-19 and its disproportionate impact on already marginalized populations.

As things stand, most immigration attorneys never deal with registry cases. Those that do crop up tend to be for older people who may not have even realized they had immigration problems in the first place. Willmoth said he handled a case 10 years ago of a truck driver in his late 50s who went to renew his driver’s license after Missouri changed its documentary requirements, only to find out he had been born in Mexico and his parents had never told him about it.

Yet they all have cases where a date change would resolve a client’s complicated predicament. One of Stock’s clients, Rebecca Trimble, was recently profiled in The New York Times after discovering at age 30, after having been continuously in the United States since she was three days old, that her parents had not taken the necessary steps to register her adoption and she could be deported. All she really needs is a formal record, and registry could give her that. “If an administration had an effective public affairs campaign to educate people about what would happen if this went into effect, you would get a lot of public support for it,” said Stock. “Because the average person thinks this [already] exists.”