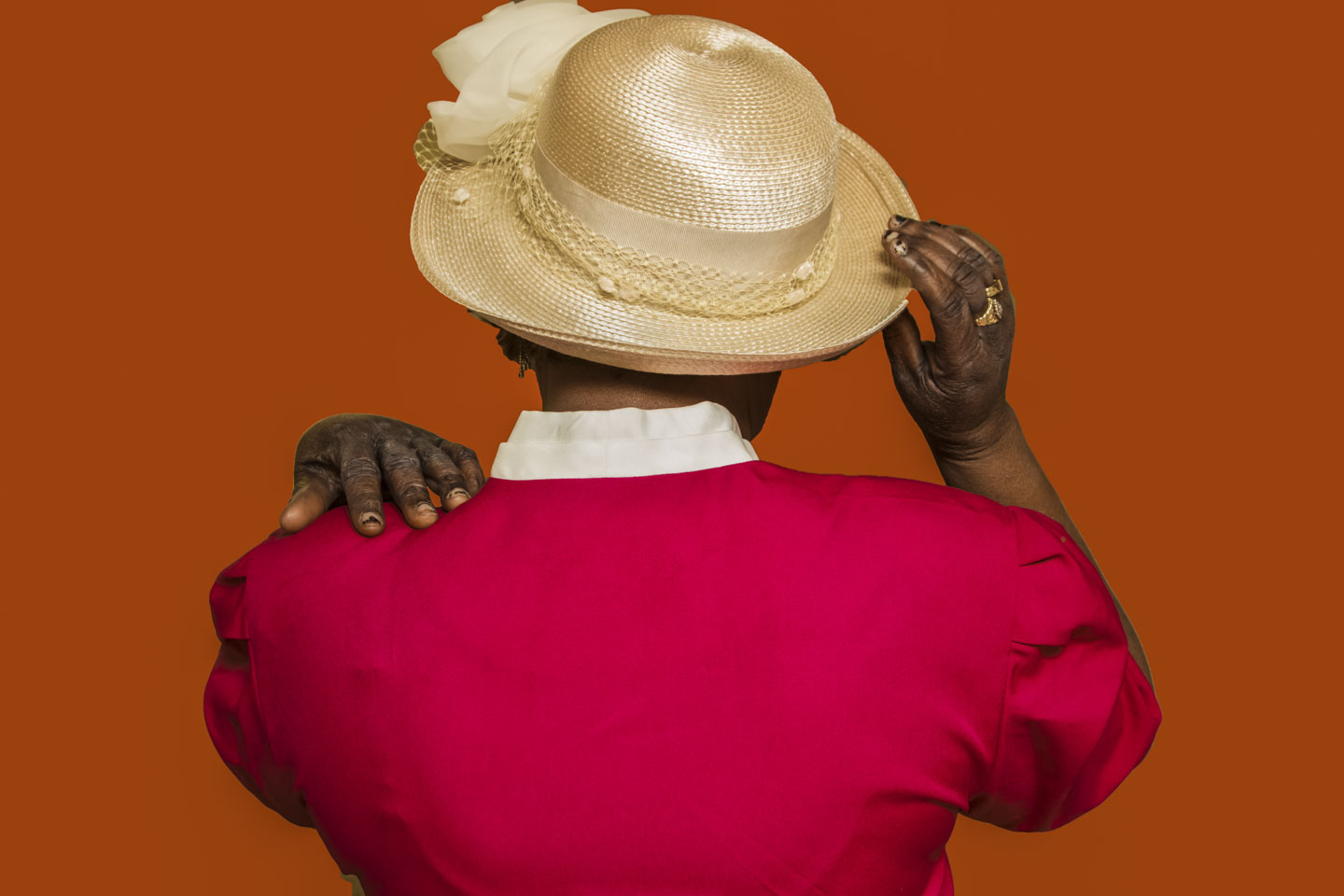 Portrait of my aunt after church. (Naomieh Jovin)

The ongoing struggle for racial justice. The future for immigrant families. The health and well-being of all Americans. The very fate of our fragile planet. The United States faces a crossroads in 2020. Seeking out the stories flying under the national radar, The Nation and Magnum Foundation are partnering on What’s At Stake, a series of photo essays from across the country through the lenses of independent imagemakers. Follow the whole series here. This installment was produced with support from the Economic Hardship Reporting Project.

My mother was a heavy-set woman. She swayed as she walked, took very purposeful steps, and walked with power. She took up space.

She was always dressed to the nines—as a Haitian woman, that was almost an obligation. Smart dress, smart shoes, a hat if she felt like it, no matter where she went she looked good and smelled good. Not that I always felt that way towards her when I was younger: As an immigrant to the United States, my mother had fought for her family, fronted the cost for countless relatives to come here and go through the immigration process (she was the second oldest of 16 siblings), worked hard to raise her children, but as a child I still felt embarrassed at times of her accent and the way she could stumble over certain English words. That comes with taking up space: If you stand out, it lets people see you, and some people won’t like what they see. 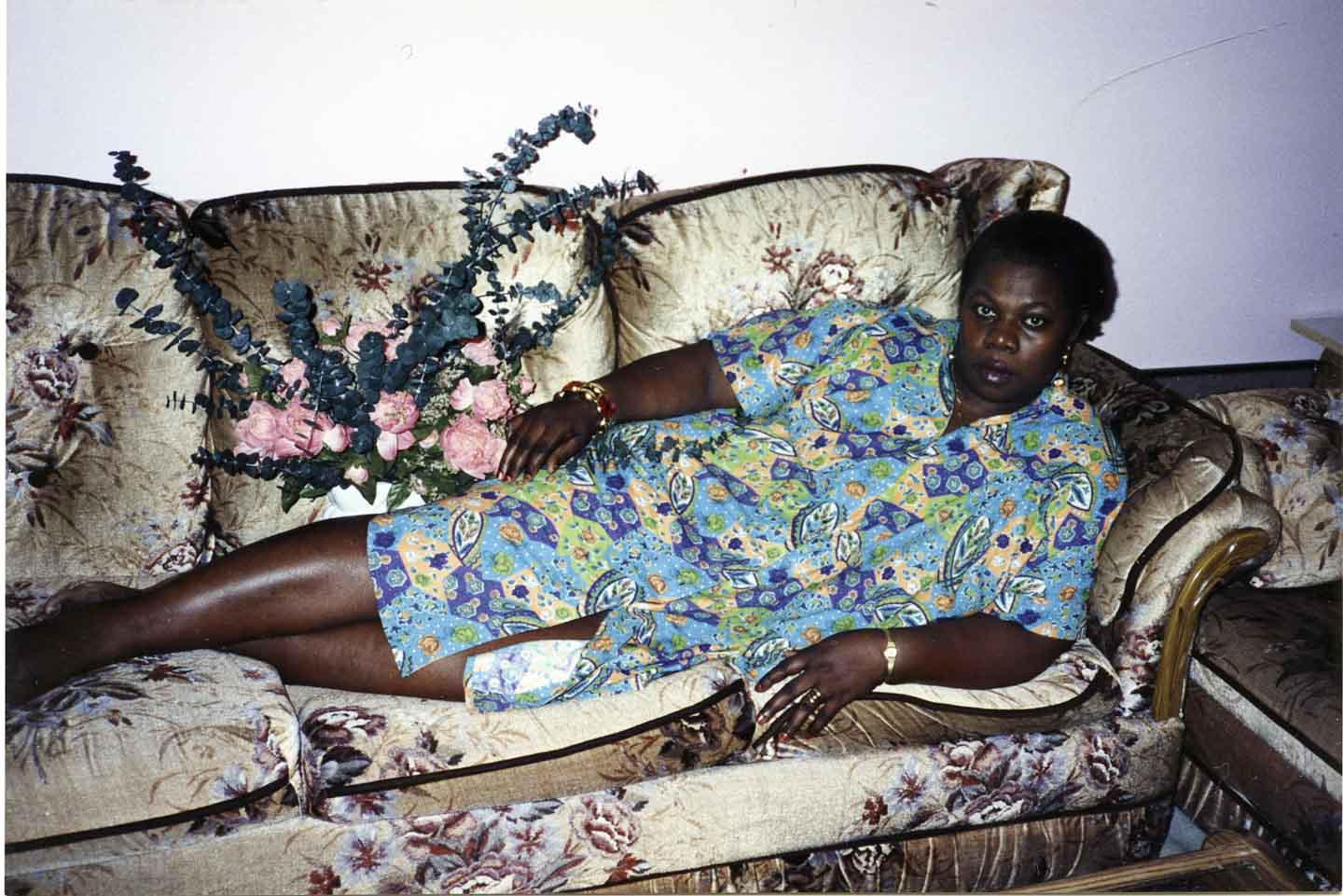 My mother was diagnosed with breast cancer when I was in the fourth grade. She went through chemotherapy and had her left breast surgically removed. The hospital gave her a wig and a pocketed, ivory-colored bra—the bra for her mastectomy, the wig for her hair loss. The treatment was hard on her; she seemed to always be struggling to breathe, and she had a hard time going up and down stairs. But what I remember most about that summer was how confident my mother remained throughout the ordeal, how she insisted on living on her own terms. I recall one day in particular, I was walking behind her, wondering why she didn’t wear her new wig or the pocketed bra. She was braless that day, wearing high-waisted shorts and a white, buttoned vest with a deep V-neck that made the surgical scars on her left breast easily visible—she looked great. Confident in her gait, swaying and stepping one foot after the other, she was living on her own terms. 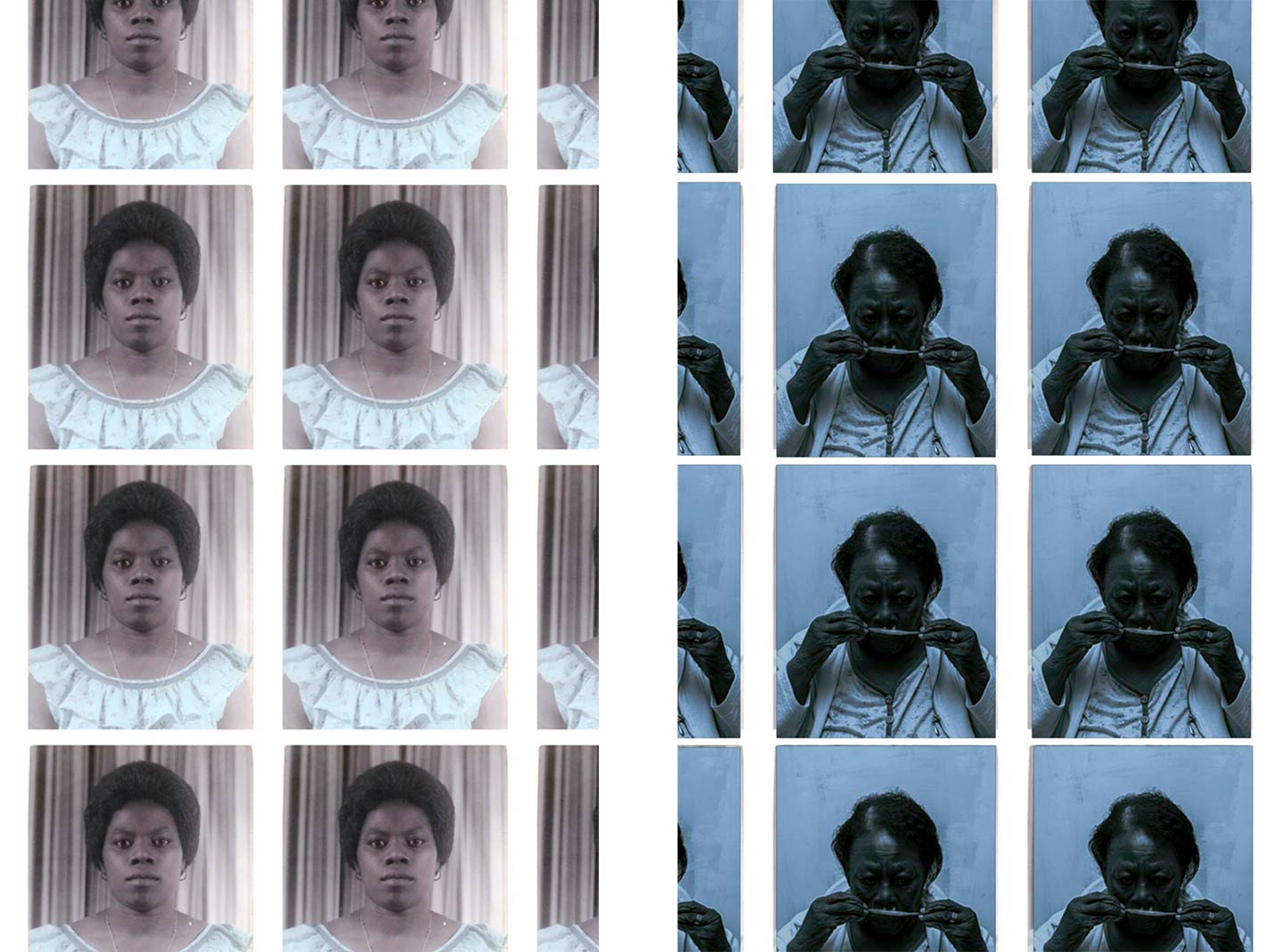 A found photo of my mother, left. My grandmother preparing to have her picture taken for her passport photo, right. (Naomieh Jovin) 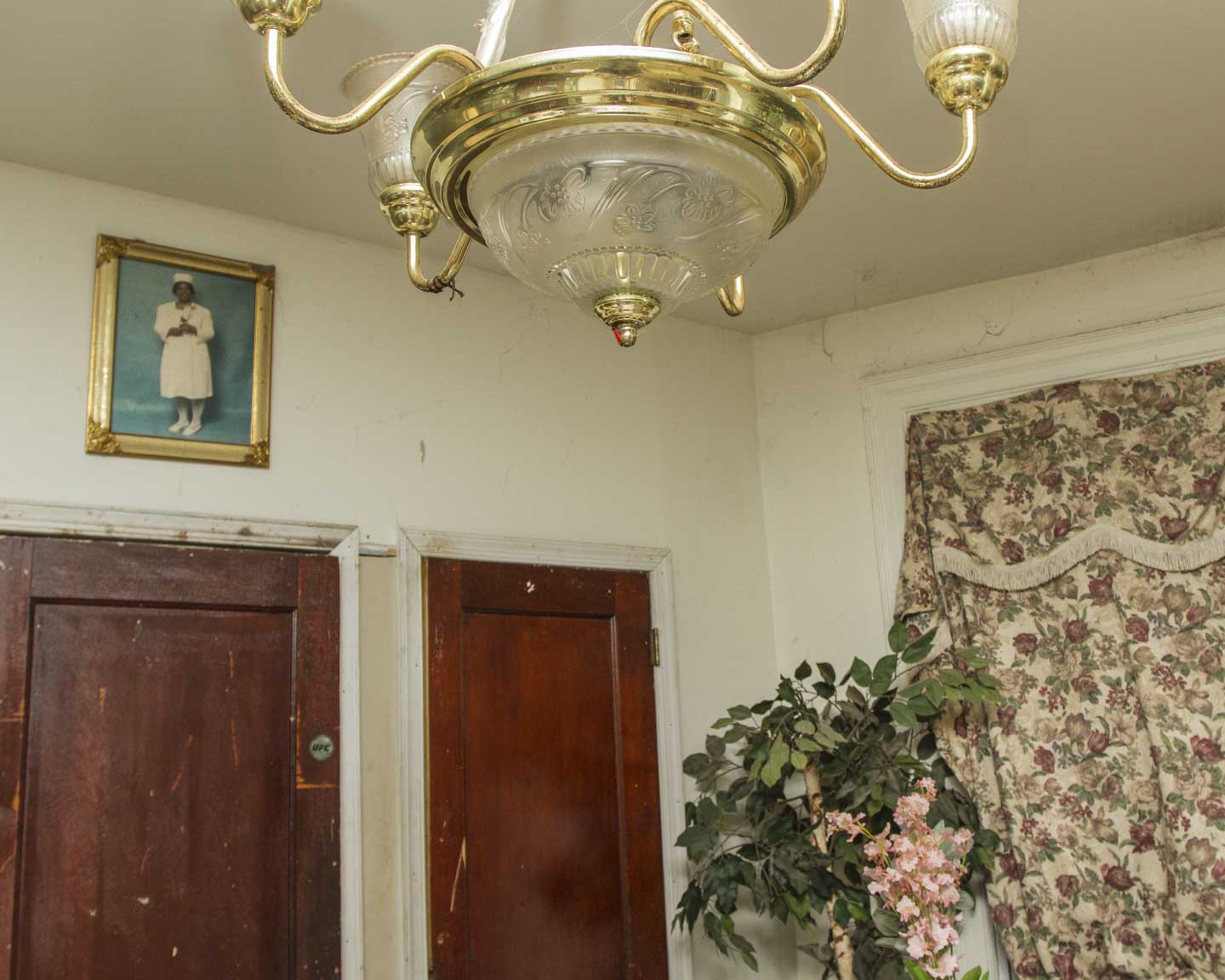 After my mother passed away, my father put up this portrait of her in our home—he said he wanted to make sure we remembered her. (Naomieh Jovin)

Even in death, she took up space: At her funeral, when I was 10, the hearse carrying her body drove for what felt like hours. The number of people that showed up to see my mother off made the rural Pennsylvania roads seem like an expressway during rush hour. The cars stretched off into the distance. I didn’t know that my mother knew so many people. I wasn’t aware of how much of a community she had built around her in her adopted country.

There is a name in the Haitian Creole language for women like my mother: “Gwo Fanm.” Literally, “Big Woman,” a Gwo Fanm is a woman who stands out in life and stands up for the ones they love. But a Gwo Fanm is also a woman who takes more than their fair share of the slings and arrows this world throws at them, absorbs hurt and pain that could crush less resilient or determined people. A lot of the women in my family are Gwo Fanm, women who have shouldered burdens beyond most people’s imaginings. In middle school, my aunt was a street vendor, and on my way home on the school bus, kids would point out the window and laugh at her for selling socks. My grandmother followed her daughter to the United States, went through the tortuous immigration process for 20 years, but died before she was able to sponsor the rest of her family to come here. These experiences left scars both physical and emotional that didn’t fade over time. 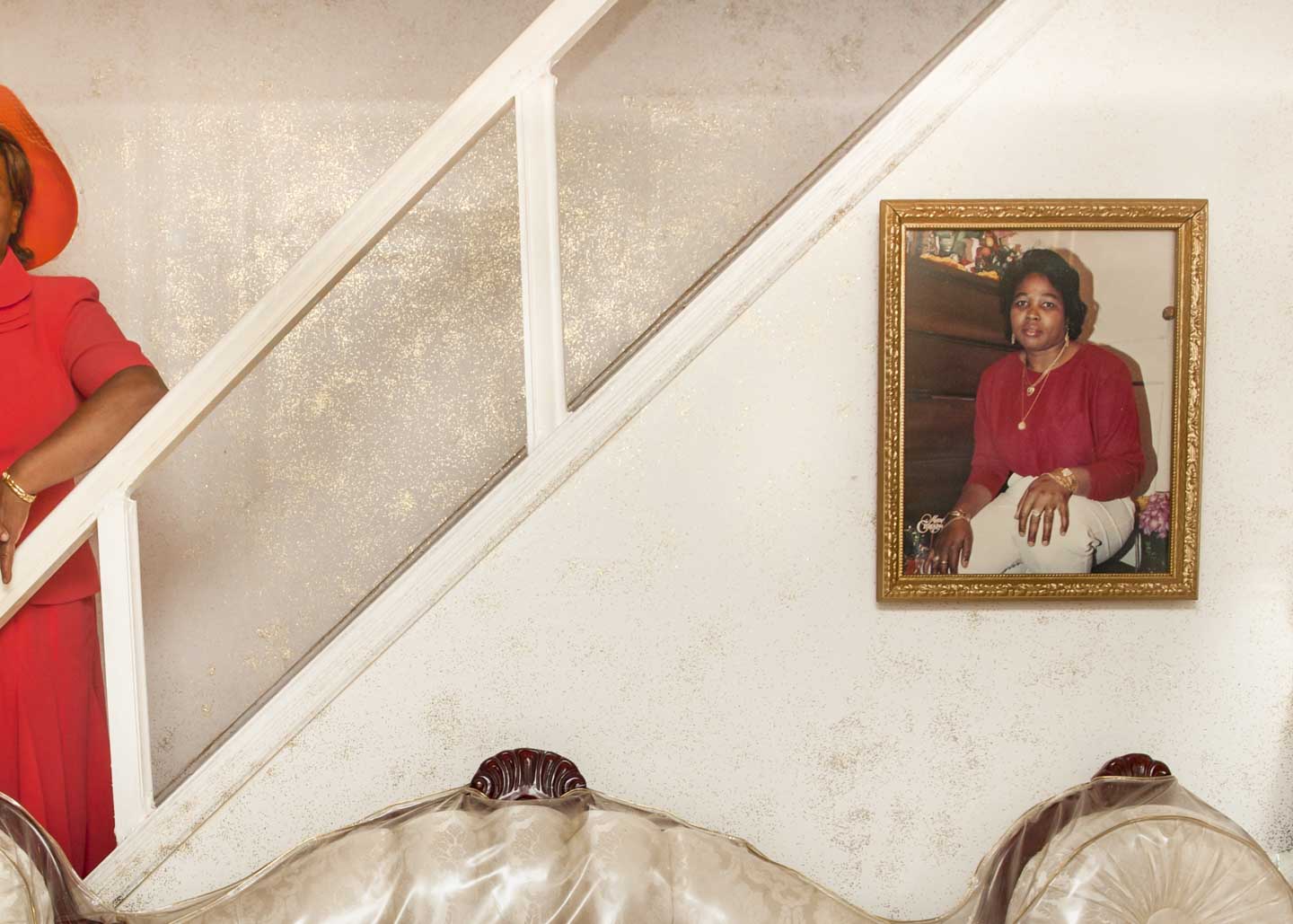 Portrait of my godmother after church. She is standing next to a photo of her younger self. (Naomieh Jovin) 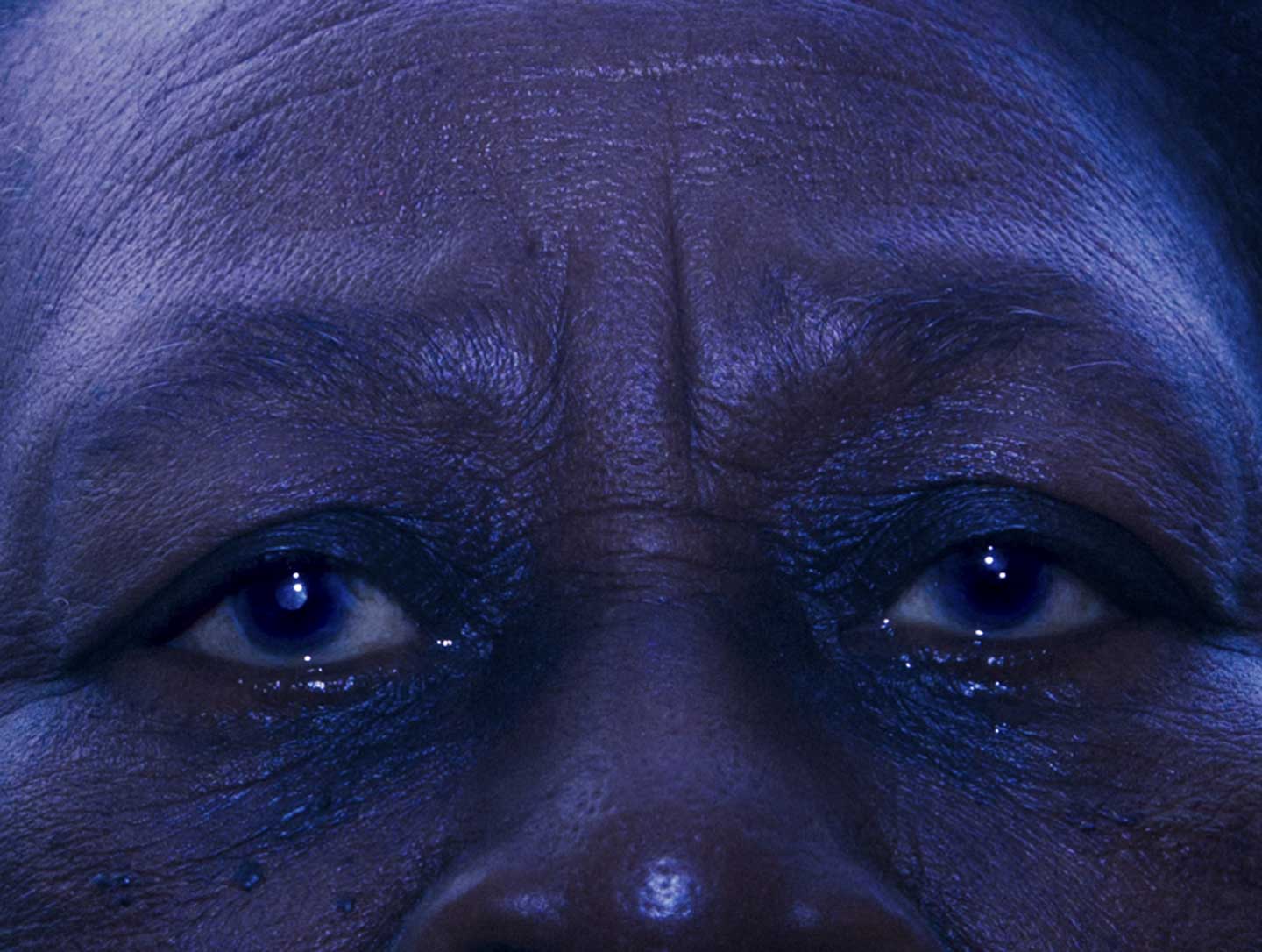 Portrait of my grandmother preparing to take her passport photos. When people think about immigrating to the US, they always frame it as taking a step up to democracy, to a better life with more opportunities. When I think about immigrating to the US, I think about the long and arduous process my grandmother had to go through once she came to this country, about how she died before she was able to sponsor the rest of her family to come to the US. (Naomieh Jovin)

I recently found a photo album my mother kept. I had never seen photos of her when she was young, I had never seen what she looked like when she was my age. Looking at the photos, I wondered what lessons she would have imparted to me about all the challenges I have faced since she passed away, what advice she would have given me to help me see that there is a way out of the confusion and disorientation I sometimes feel. How did she navigate what I now face? 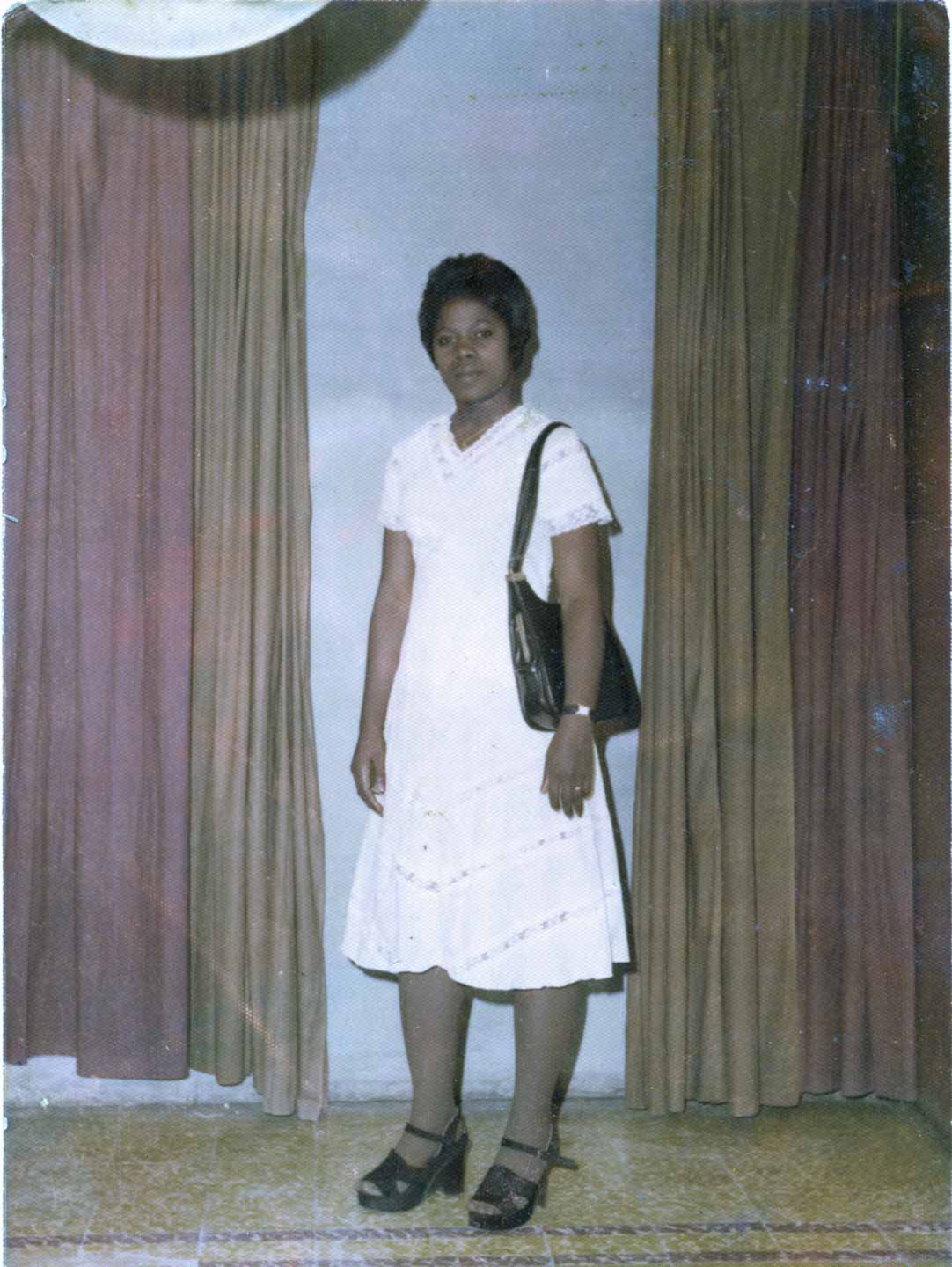 Found image of my mother when she was young. (Naomieh Jovin) 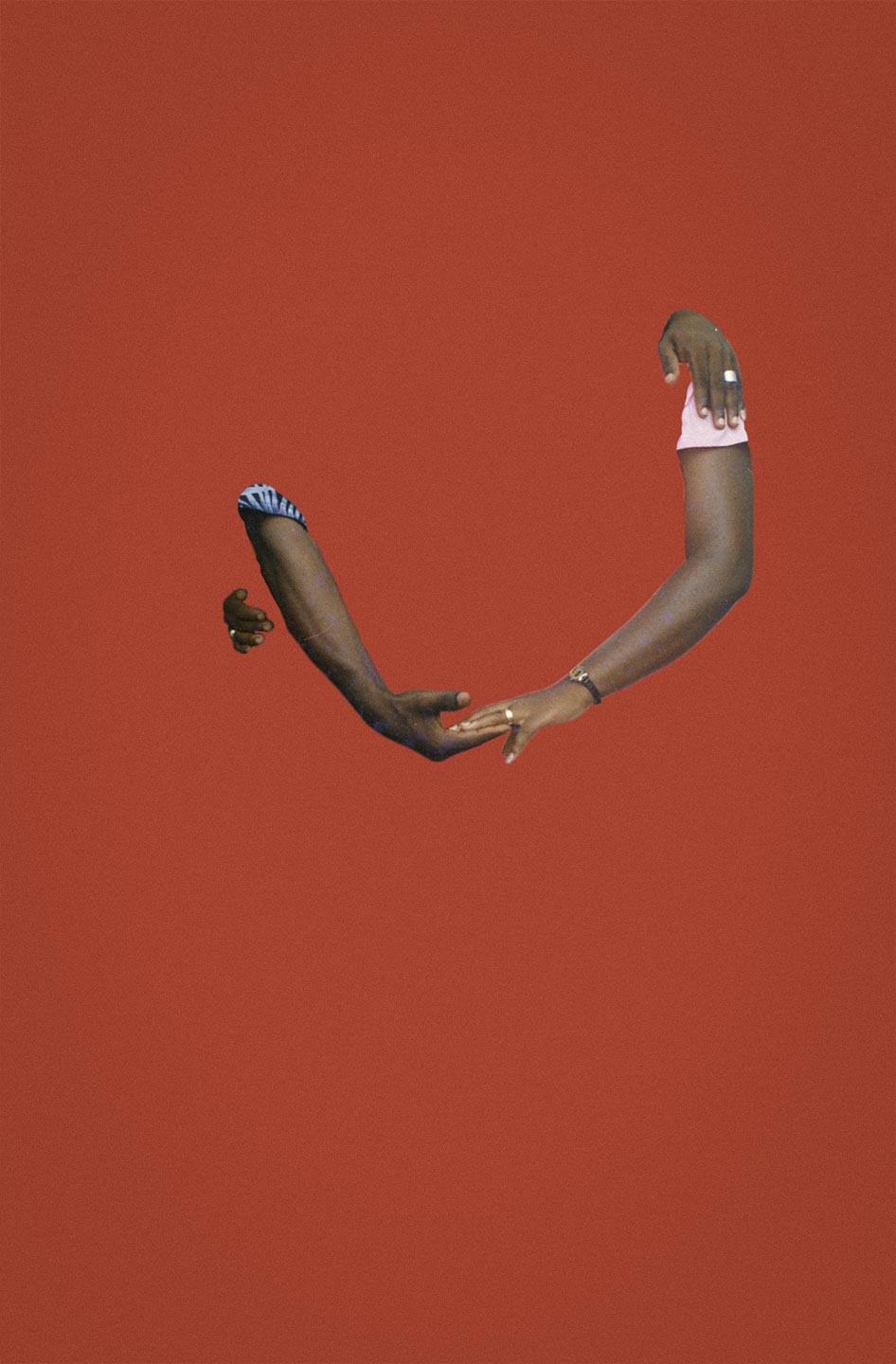 Manipulated image of my uncle and his wife. (Naomieh Jovin) 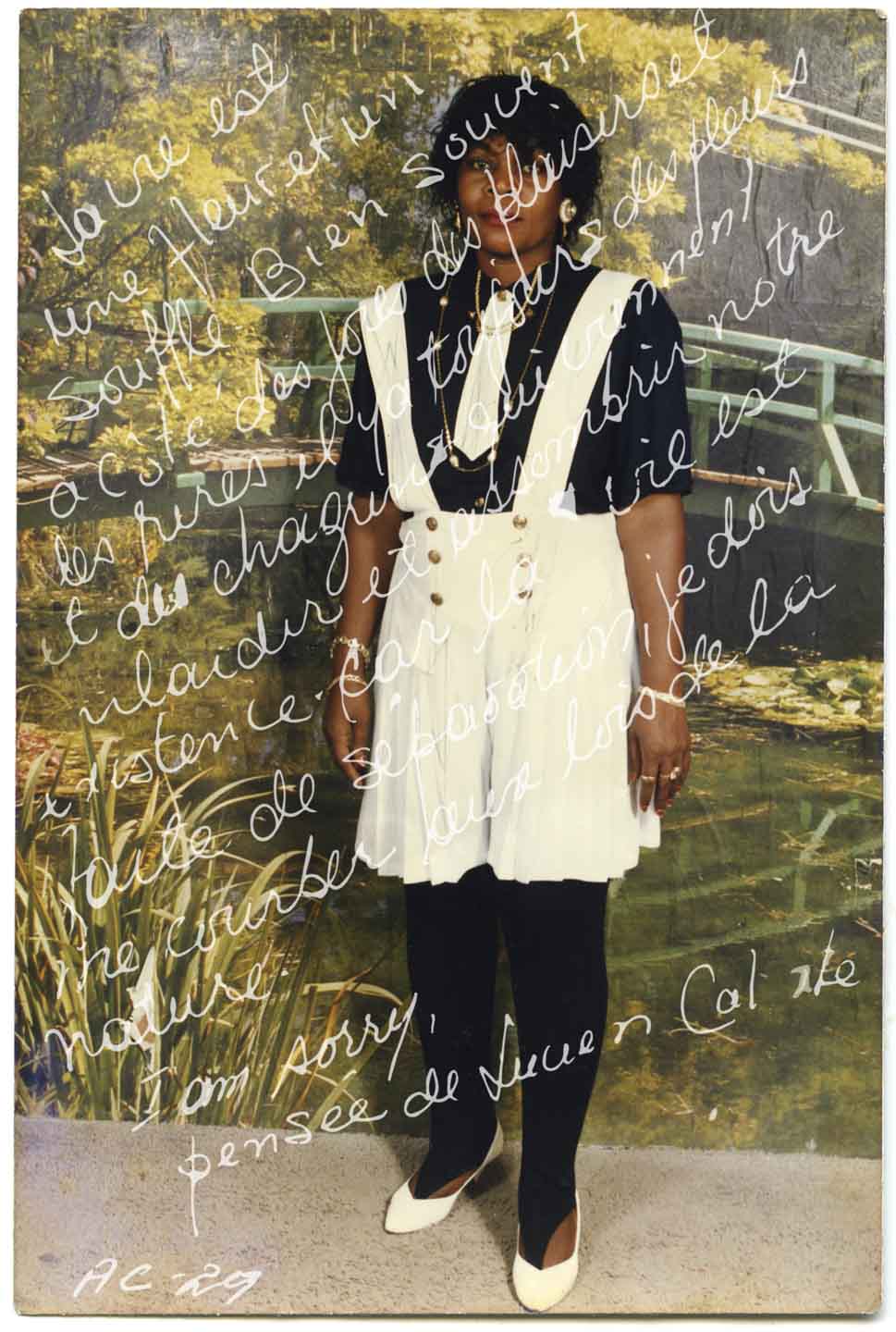 Not too long ago, I found this image of my aunt—on the back she had written a breakup letter to her lover: “Life is a flower and a blow. Very often right next to joy, pleasure, and laughter, there is always tears and sorrow that brings ugliness and darkness to our existence. Because life is made of separation, I must bend myself to the laws of nature.” (Naomieh Jovin)

This project is about these Gwo Fanm, and about my own role in my family’s story. When I told my godmother that I wanted to become a photographer, she jokingly asked me, “So you can go to Haiti, be like all the other journalists and photograph just the bad stuff?” This is every Haitian immigrant’s story: We are here in America and all we see in the news is a grim representation of the home we know and love. It’s no surprise that people like my godmother look down on photographers—they tend to only show what America wants to see. Part of what drives me as a photographer is to show a fuller picture of the Haitian experience, or at least my experience as a Haitian American. 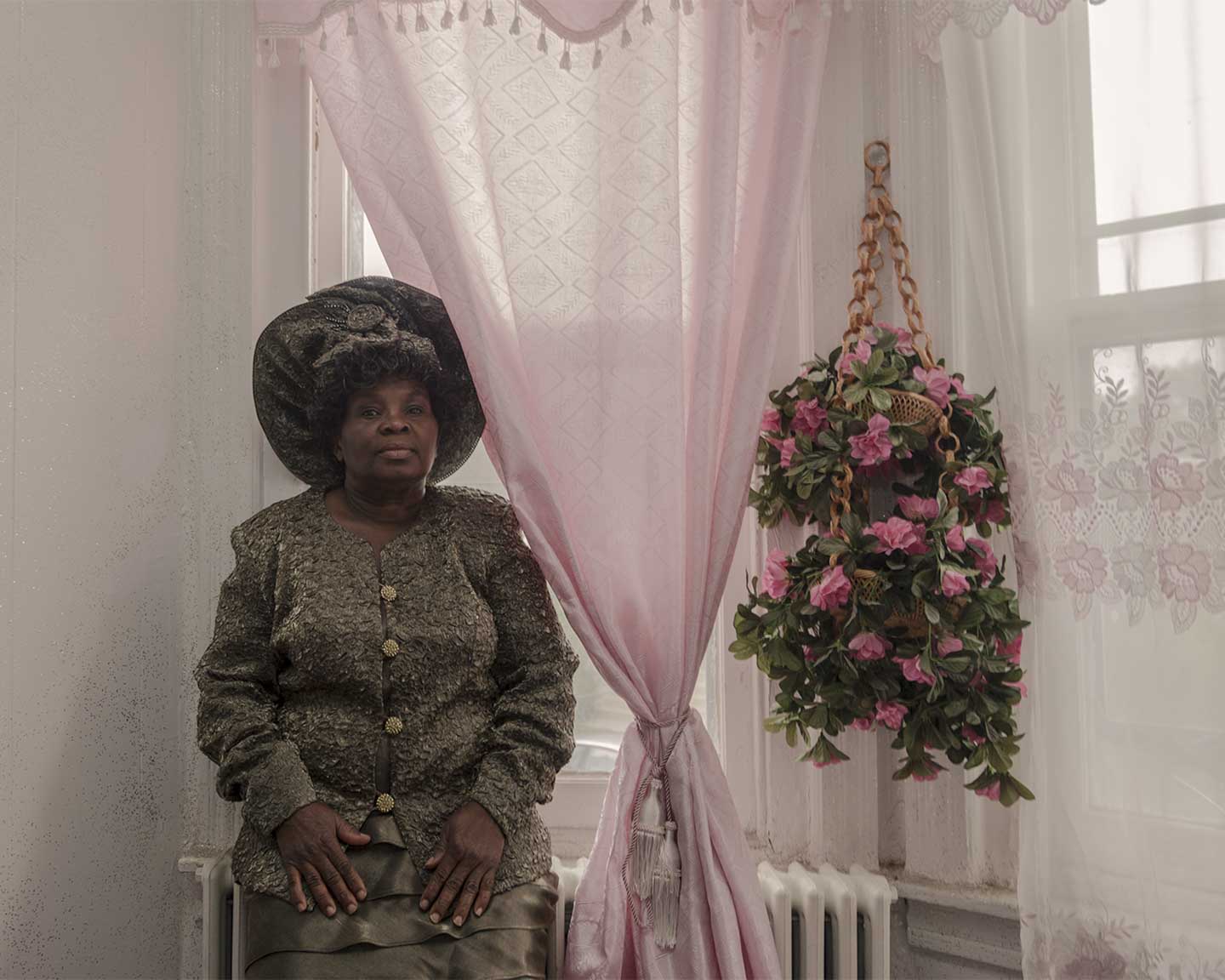 Portrait of Sè Marie, who rented a room from my godmother and became like an aunt to me. (Naomieh Jovin)

So much of the immigrant experience is one of loss, loss of the community they leave behind, loss of the history in their home country. By creating these photos of the women in my family, and reclaiming the images they made during their lifetimes, I hope to forestall this loss, to show the purpose and honor that defined their lives, and to actively create a new narrative for my generation. 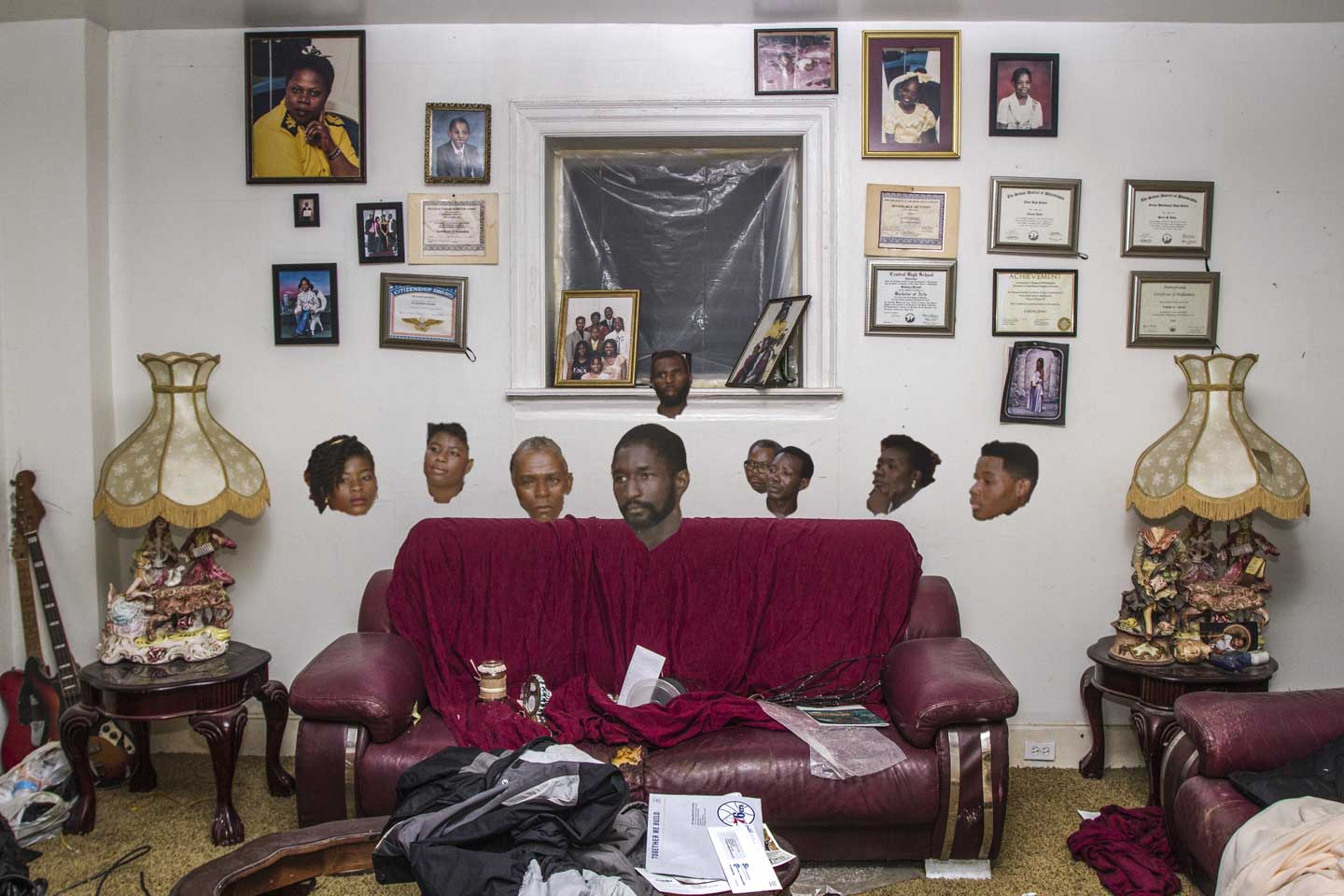 Onto this image of my abandoned family home I have collaged the faces of my family members. (Naomieh Jovin)

Is There a Future for Russian Independent Media?