May 26, 2020. People come from all directions: holding signs, wearing masks. It’s quiet, considering the size of the crowd. The day after George Floyd was murdered by Minneapolis police, the space that will become George Floyd Square is blocked off by some kind of red ribbon, twisted through the doors and windows of a barricade of cars. Flowers mark the spot on the sidewalk where he died. In the days to come, the flowers multiply and other forms of memorial emerge: vigils, murals, billboards, portraits.

In the 12 months since Floyd’s murder, community members have continued to occupy and preserve George Floyd Square. The semiautonomous zone is built for and around Black liberation: a fight for a world in which Floyd would still be alive. It aims to both resist oppression and avoid oblivion. 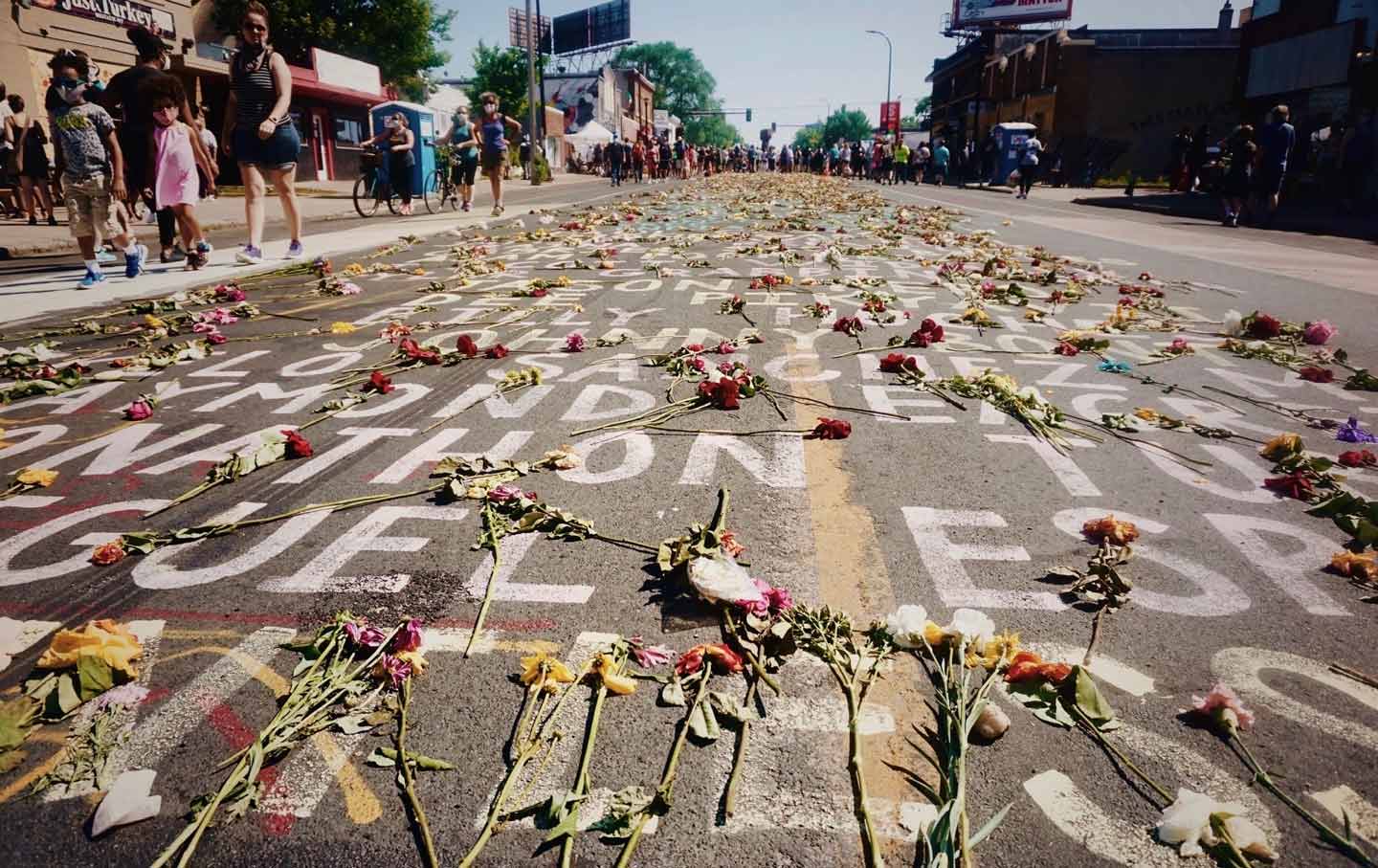 June 7, 2020. On what would have been Prince’s 62nd birthday, his music fills George Floyd Square. People gather for a BBQ and games of pick-up basketball. On Chicago Avenue, the names of victims of police violence have been painted on the street, crossing the dotted yellow line. GEORGE FLOYD. SANDRA BLAND. TONY McDADE. To name a few.

In “Mathematics Black Life,” Katherine McKittrick addresses the historical erasure of Black “living” in collective memory. Quantitative understandings of reality are routinely prioritized over lived experiences, but numbers tell only a fraction of the story. The magnitude of Black loss is greater than the aggregated individual losses. Remembering is a powerful tool for fighting oppression because forgetting is a powerful tool for perpetuating it. 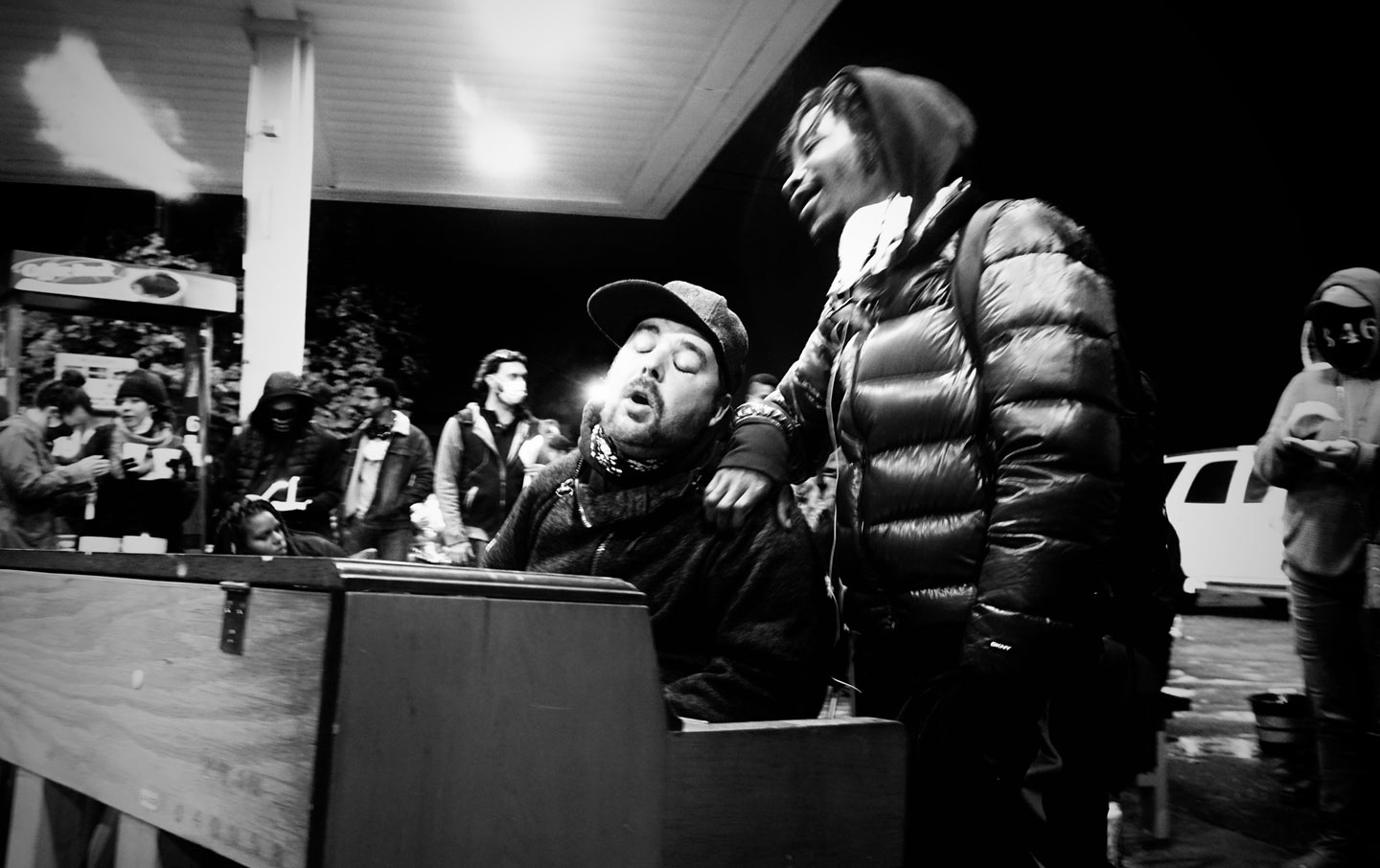 September 11, 2020. At Say Their Names Cemetery, around the corner from where George Floyd was killed, rows of tombstones commemorate Black victims of police violence. Despite rain and chill, people gather around sunset to hear activists speak. Two traveled from Colombia, where Javier Ordoñez was just killed by police. As night falls, the group moves down the street to the Speedway—the hub of George Floyd Square. Hot chocolate and candles are handed out. A sing-along breaks out as someone riffs on the piano. Soon, the crowd is singing. “All cops are bastards / We don’t need slave catchers!”

In her book In the Wake: On Blackness and Being, Christina Sharpe asks: “What does it mean to defend the dead?” She describes Black existence as living in a paradox called “the wake.” “Living in the wake means living the history and present of terror, from slavery to the present, as the ground of our everyday Black existence,” she writes. In Lose Your Mother, Saidiya Hartman writes on the complex and traumatizing intricacies of remembering and forgetting the violent past of the Atlantic slave trade. “But what, if anything, could I remember after hundreds of years of forgetting?” 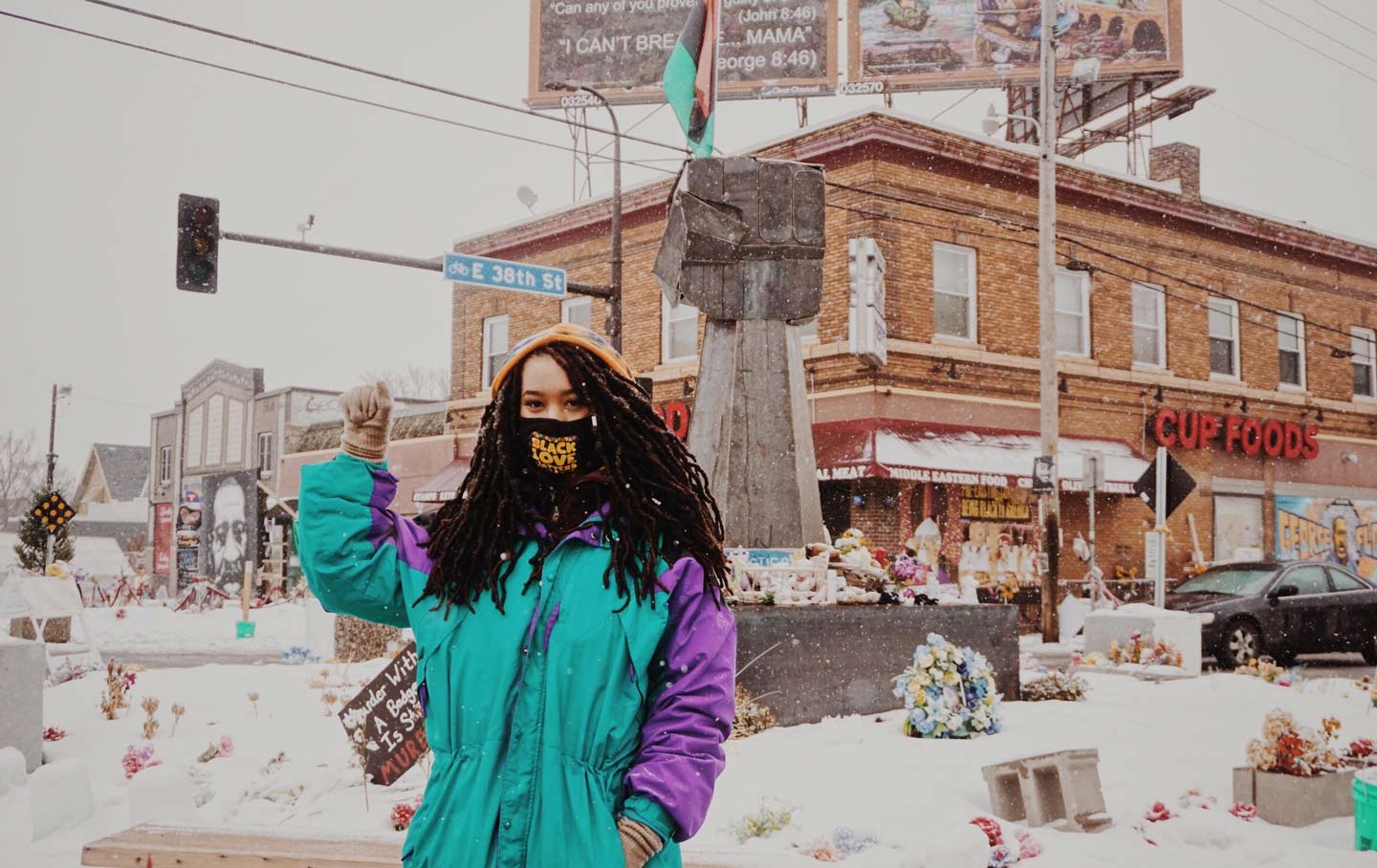 February 21, 2021. On the anniversary of Malcolm X’s assassination, a small group gathers at George Floyd Square to discuss Black liberation. An angel painted on the concrete where Floyd was murdered has been cleared of snow, as have walkways to parts of the memorial. Flowers of various colors dot the space, despite the dark, gray season. Smooth ice sculptures spell out short messages: SERVICE. LOVE. GFS. (the abbreviation for George Floyd Square). Nearby, children are sledding.

Contemporary Black feminist thinkers like Hartman and Sharpe disrupt the politics of remembering and forgetting by recognizing organic intellectuals, past and present, as keepers of their own stories—stories which belong in the archives. In “The Aesthetic Insurgency of Sandra Bland’s Afterlife,” Philip Luke Sinitiere argues that aesthetic insurgency—“creative expressions that respond directly to forms of political, social, and economic injustice”—is a critical part of sparking meaningful social change, the kind of change where power actually shifts hands. 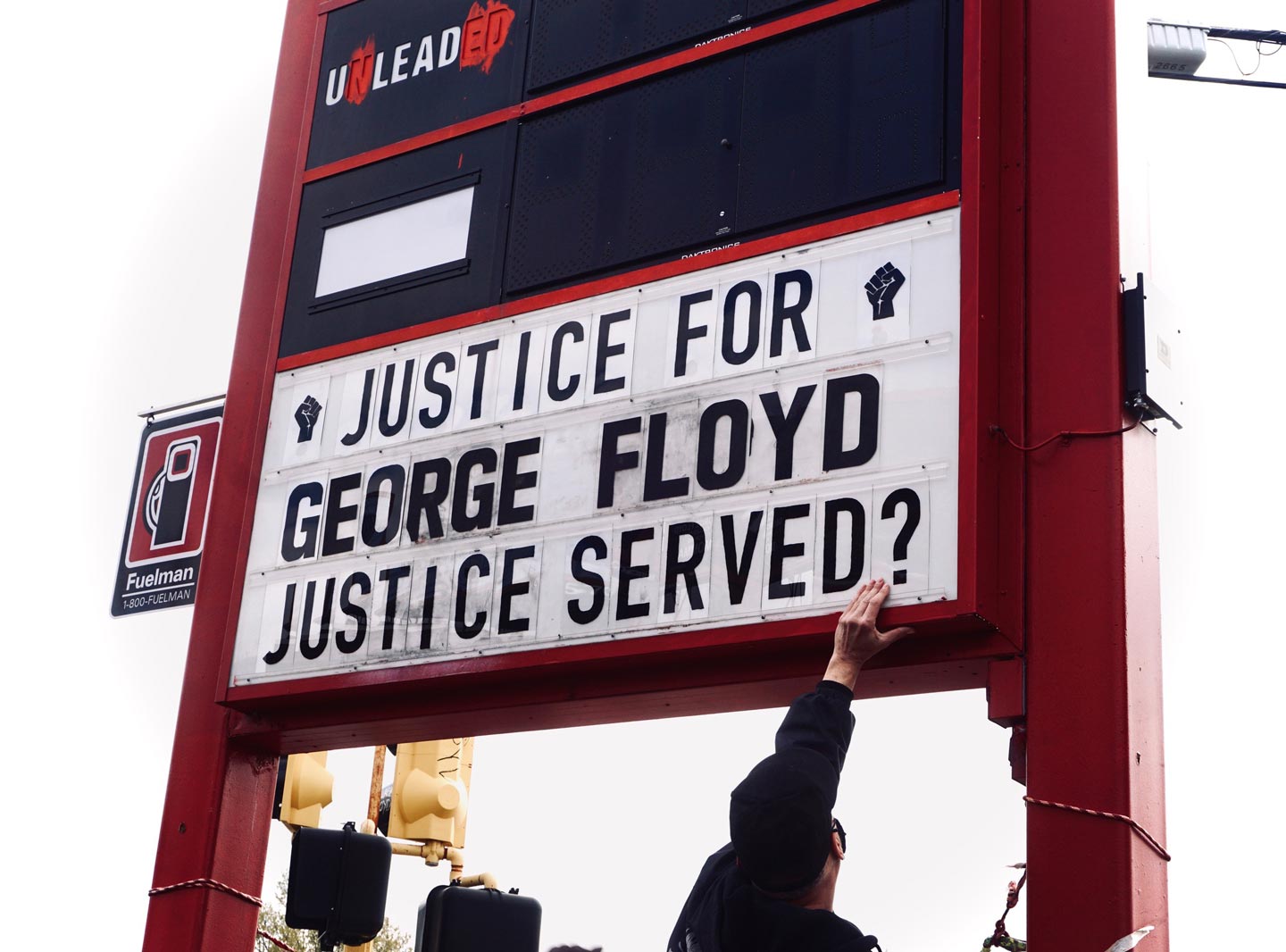 April 20, 2021. For months, the gas station sign in George Floyd Square counted down to the Derek Chauvin trial. When the guilty verdict is announced, the square is overflowing with people and cheers. The countdown is replaced with a question: JUSTICE SERVED?

In No Mercy Here, Sarah Haley writes that quotidian individual acts of survival and resistance, which she calls sabotage, have the power to shape politics, struggles, and the social order—just like direct action. “Sabotage is not about success or triumph against systematic violence and dispossession,” Haley writes. “Instead it is about the practice of life, living, disruption, rupture, and imagined futures.” 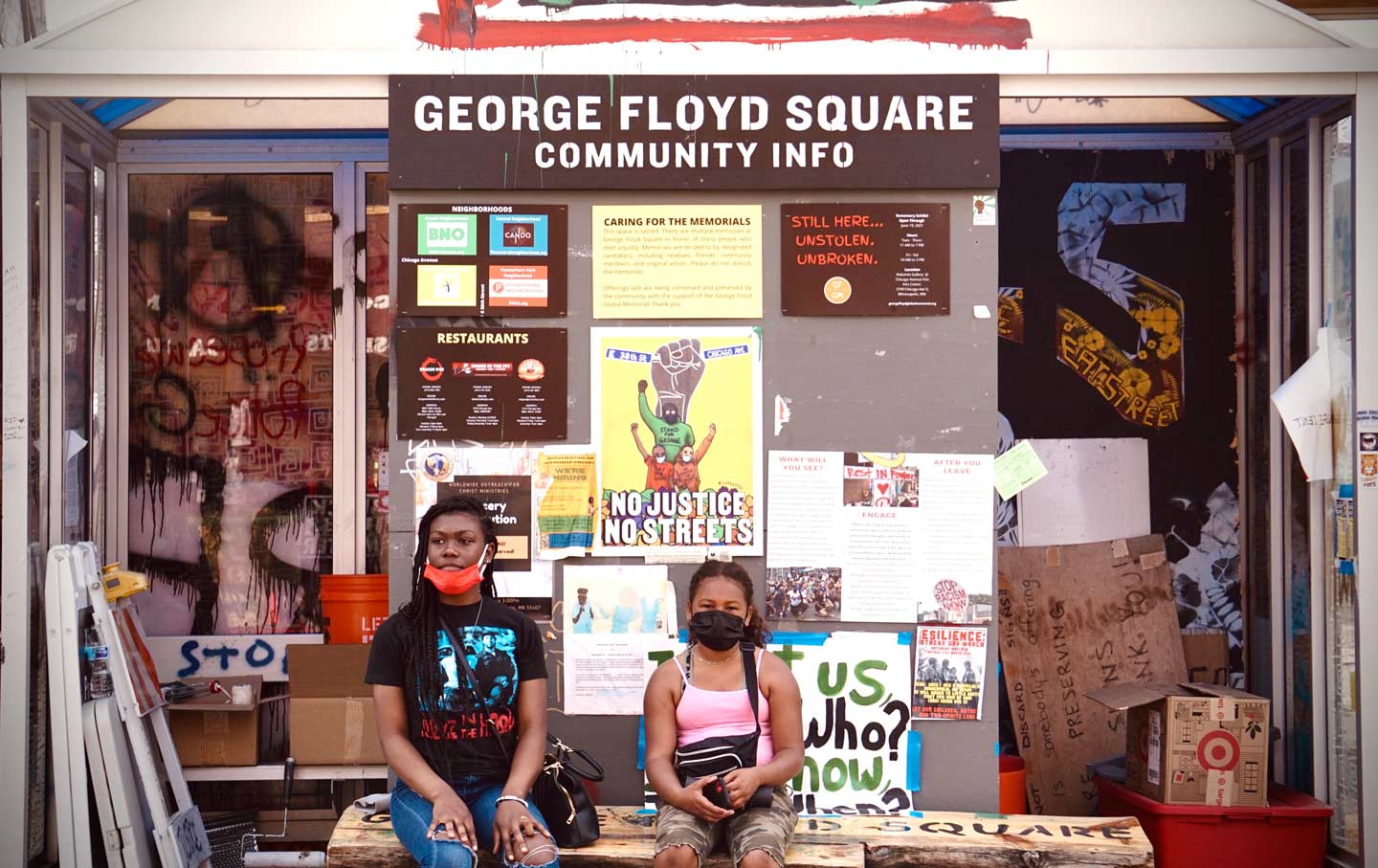 May 25, 2021. On the first anniversary of Floyd’s murder, a stage is erected in a parking lot in George Floyd Square. The concert is scheduled for evening, but by noon the still-barricaded intersection is buzzing. Since his death, visitors from around the world have been to George Floyd Square, according to a map posted in the area. Just over a week before the anniversary, the same parking lot was temporarily turned into a roller rink. People danced and skated circles on the asphalt.

The Speedway (renamed the Peoples’ Way) sign now says: READ THE DEMANDS. Next to it, a bus stop has been turned into a community bulletin. While some have complained about the disruption of the transit line, disruption is precisely the point. “So here we are in the weather, here in the singularity,” Sharpe writes in the last paragraph of In the Wake. “Here there is disaster and possibility.”

On the community bulletin, a sign reads: “Out of trauma you will see an abundance of beauty.” Underneath is a poster painted with a quote from late Freedom Fighter John Lewis: “If not us, then who? If not now, then when?”