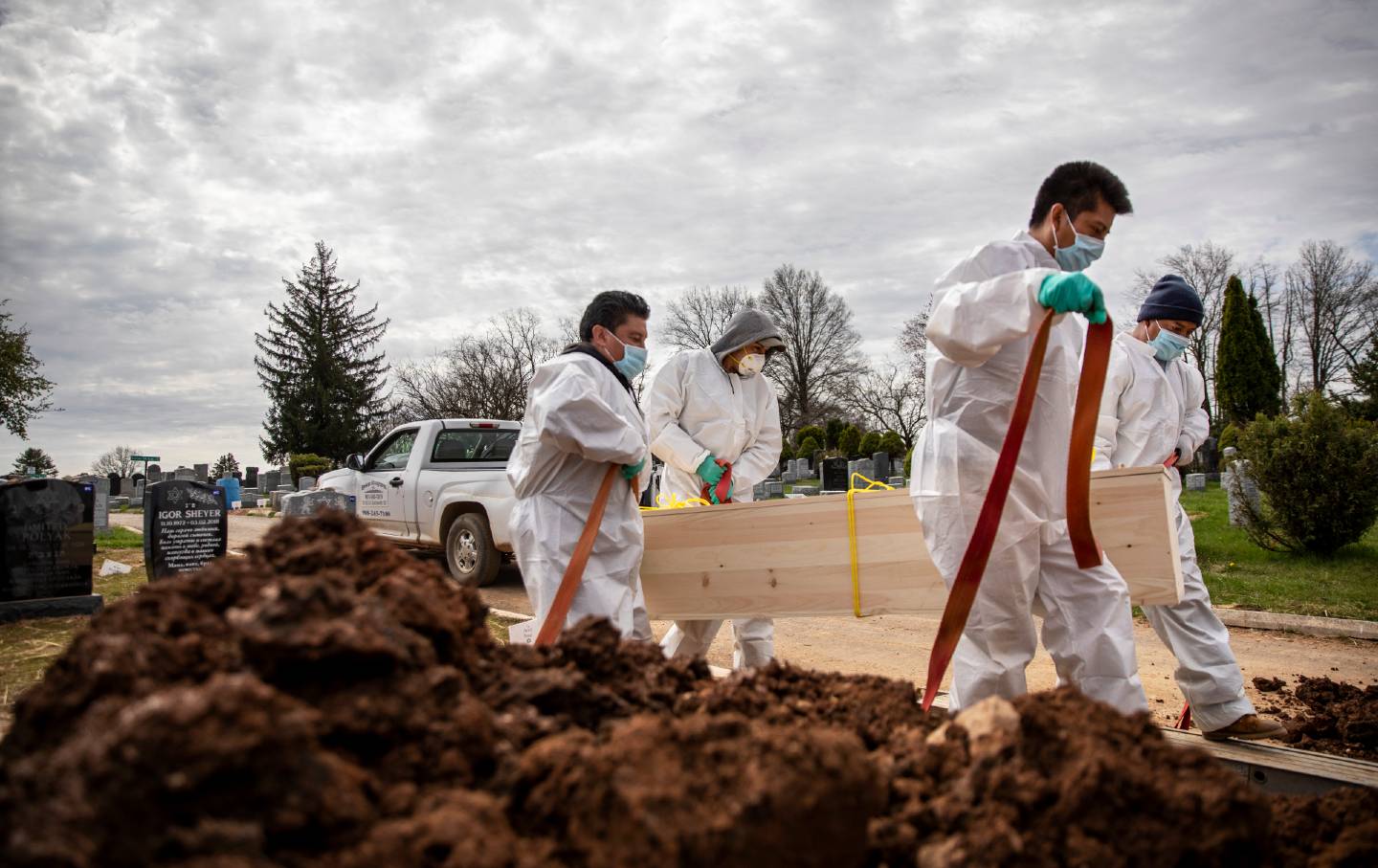 Gravediggers carry the casket of someone presumed to have died from the coronavirus as they are buried without any family present at Mount Richmond Cemetery in the Staten Island borough of New York on April 7, 2020. (David Goldman / AP Photo)

Last week, the number of Americans dead from Covid-19 surpassed 150,000. Despite a death toll that now exceeds the total loss of life seen in some of America’s greatest wars, we still have no national plan for testing. No plan for contact tracing. Our rules for mask use and social distancing are haphazard at best, and a selfish minority of Americans actively ignore what rules are in place.

More people will die. We have over 4 million cases, and that number is growing rapidly. Some of those who are now sick will soon die. Some of those who are now sick but don’t know it yet will soon die. Some who are now perfectly healthy will become infected and die. Consider: The last person to die of Covid-19 this year hasn’t even been infected yet. Somebody who has done all of the right things thus far—worn a mask, washed their hands, and, if lucky, spent the better part of five months socially distant and lonely—will nonetheless come into contact with someone who hasn’t been as careful, contract the virus, and die before the holidays. People will continue to die needlessly because other people couldn’t be bothered to take the threat seriously.

Nobody will pay for these senseless deaths. Nobody will go to jail because they didn’t wear a mask and infected somebody who had a preexisting condition. No prosecutor is going to be able to make a “reckless homicide” charge stick, because all a would-be defendant has to do is say, “I was just listening to the president of the United States.”

That president, Donald Trump, will never pay for what he’s done. Oh, he might lose an election. He might even be compelled to leave office once he loses (though that is still kind of up in the air). But Trump will never be held criminally accountable for the deaths he has caused. We cannot calculate how many Americans would have died even if we did everything right versus how many Americans have died and will die because Trump has done everything wrong, but that number is large. The delta is monstrous.

Trump and his administration should be treated like mass murderers. Vanity Fair reports that Jared Kushner may have decided to scuttle a national testing plan because the deaths were, at the time, heavily skewed towards “blue” states with Democratic governors. If true, that behavior should be viewed as a crime against humanity. No, it is not the killing fields; it is not the Armenian genocide; it’s not the gulag or any number of recent horrors of history. But I would argue that it could meet all three elements required to go before the International Criminal Court: It’s persecution against an identifiable group, as well as an inhumane act “intentionally causing great suffering, or serious injury to body or to mental or physical health”; it’s a systemic “attack” against a civilian population; and it’s done with knowledge of the attack.

Then again, even in those cases when the Trump administration has started the fires, it won’t be held accountable. Businessman and former presidential candidate Herman Cain died last week from Covid-19. He was stricken with the disease soon after he attended Trump’s maskless rally in Tulsa. Many people talked about the death waiver Trump made attendees sign, but while that waiver is morally telling, it’s most likely legally unnecessary. Cain, like so many others at that rally, acted like Covid-19 was a liberal hoax. He put himself at risk before and after the rally. There’s literally no way to tell if he got the virus at the rally. Cain is dead because of Trump—if not that specific rally, then his policies—but no court would hold Trump legally responsible for killing a 74-year-old cancer survivor with a communicable disease, with or without a death waiver.

One can imagine a situation where somebody would be liable, if not criminally, then in civil court, for infecting others with the coronavirus. I expect those lawsuits to come as people are forced to go back to school and work. Unfortunately, Mitch McConnell expects them, too. That’s why McConnell and the Republican Party are holding unemployment benefits hostage as they try to write Covid-19 liability protection into the next relief package.

McConnell doesn’t care if workers get sick. He is doing nothing to protect their health and safety from the virus. All he cares about is preventing people from suing their employers, should those employers mandate that workers go to work—and then get sick and die. The stakes couldn’t be higher: Right now, the only thing preventing wide-scale “reopening” is the fact that employers don’t want to be sued for creating infection hot spots in their offices and factories. If McConnell gets his way, Wall Street will be as casual with American lives as the White House has been. And mass deaths will follow.

School districts don’t even need McConnell’s liability protections. While there have been various reports of teachers, staff, and even college students being asked to sign death waivers, these waivers are unlikely to stand up in court. But that doesn’t mean teachers and staff, or their survivors after they die, will have a cause of action against the school districts. Instead, just like the people who refuse to wear a mask, the school districts will be able to say that they were following the “reasonable” guidelines laid out by their state governments. If a school opens and does everything the governor tells it to do, nobody will be able to sue the school when teachers and students die. In this case, the “I was just following orders” defense works, even if those orders come from known bad-faith actors like Florida Governor Ron DeSantis or Georgia Governor Brian Kemp. 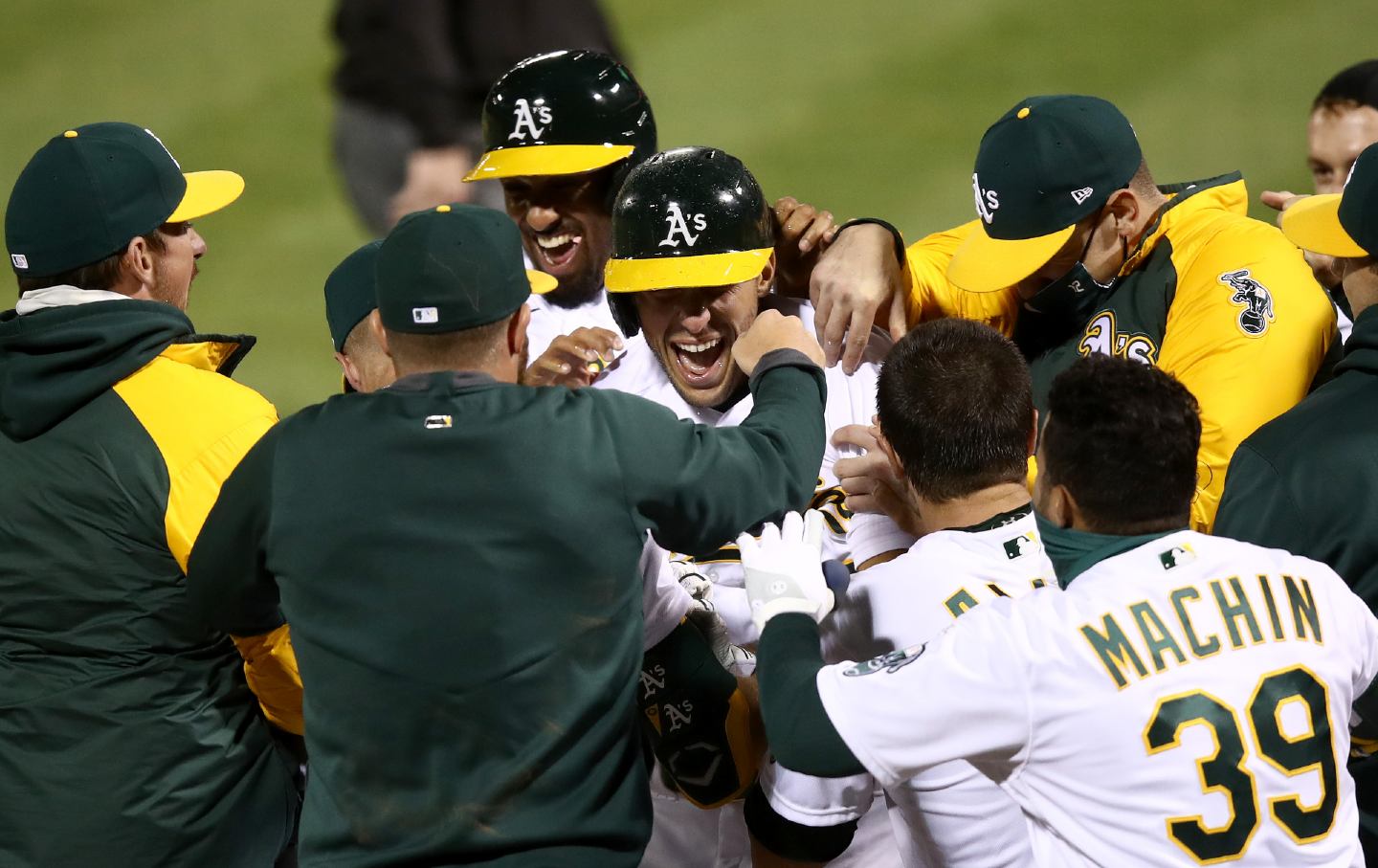 America Doesn’t Deserve to Have Baseball Back

Over 150,000 people are dead. Many, many more will die. And nobody will be held accountable for causing this mass die-off of Americans. There will never be justice for those who have died from the neglect of the Trump administration.

The people responsible for these deaths are monsters. The least we can do is start treating them as such.