The Nation and Magnum Foundation are partnering on a visual chronicle of untold stories as the coronavirus continues to spread across the United States and the rest of the world. This week, Liz Sanders documents the health care workers who cared for her father during his final days.  —The Editors

This photo essay was supported by the Economic Hardship Reporting Project (@econhardship).

As I left the hospital here in Hot Springs, Arkansas, after my dad died in early March from complications from dementia, I made a promise to myself to find the nurses that cared for him: write them a letter, or visit them and thank them. But then, life happened. There was a funeral home to contact, a death certificate to order, and then, of course, the coronavirus hit. I soon forgot my promise.

Anyone who has lost a loved one, or been at one’s side during illness, knows that your entire focus is on the one you love. Everything outside of that fades away, your tunnel vision only seeing the one in need. The people taking care of them become a blur, in and out of the room, tending to their needs, but then gone again in a flash.

But after my father’s death, and as the coronavirus crisis began outpacing our health care system’s ability to deal with it, I realized that the best way to deal with my own grief would be to photograph through it, to make images of the health care workers who had intimately cared for my dad during his illness and at the end of his life. We see these workers only when we need them, and in the case of this pandemic, we weren’t, as a nation, prepared to protect them. 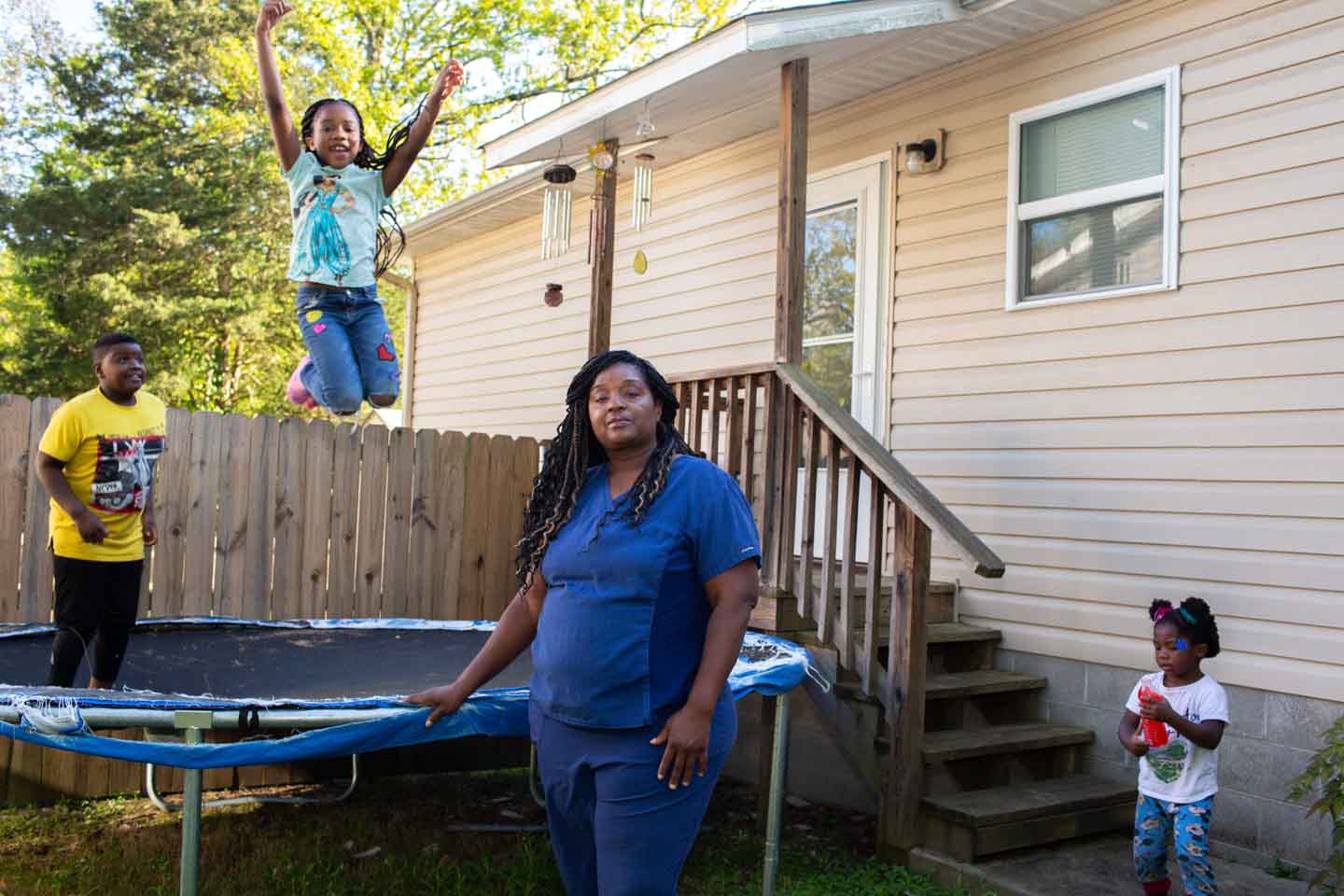 Sherry was at our family home often in my dad’s last weeks. (Liz Sanders)

Every week, Sherry Hutson came by to bathe dad and give him a shave. He called her “the mayor” because she was so good at getting him to take a bath, even though he hated it. “Well, you must be the president, then,”’ she quickly quipped back, and he laughed and laughed.

It was easy to get in touch with Sherry, because she was in our family home so often. But for a lot of dad’s last days, I was scrambling between New York, where I had a day job in a gallery, and Arkansas, where I was trying to spend as much time as possible with my dad, to lighten my mom’s workload, and to document our relationship in a project called “Be Here to Love Me.” As a result, so many of the people who made sure everyday life went smoothly for dad were relatively anonymous to me. 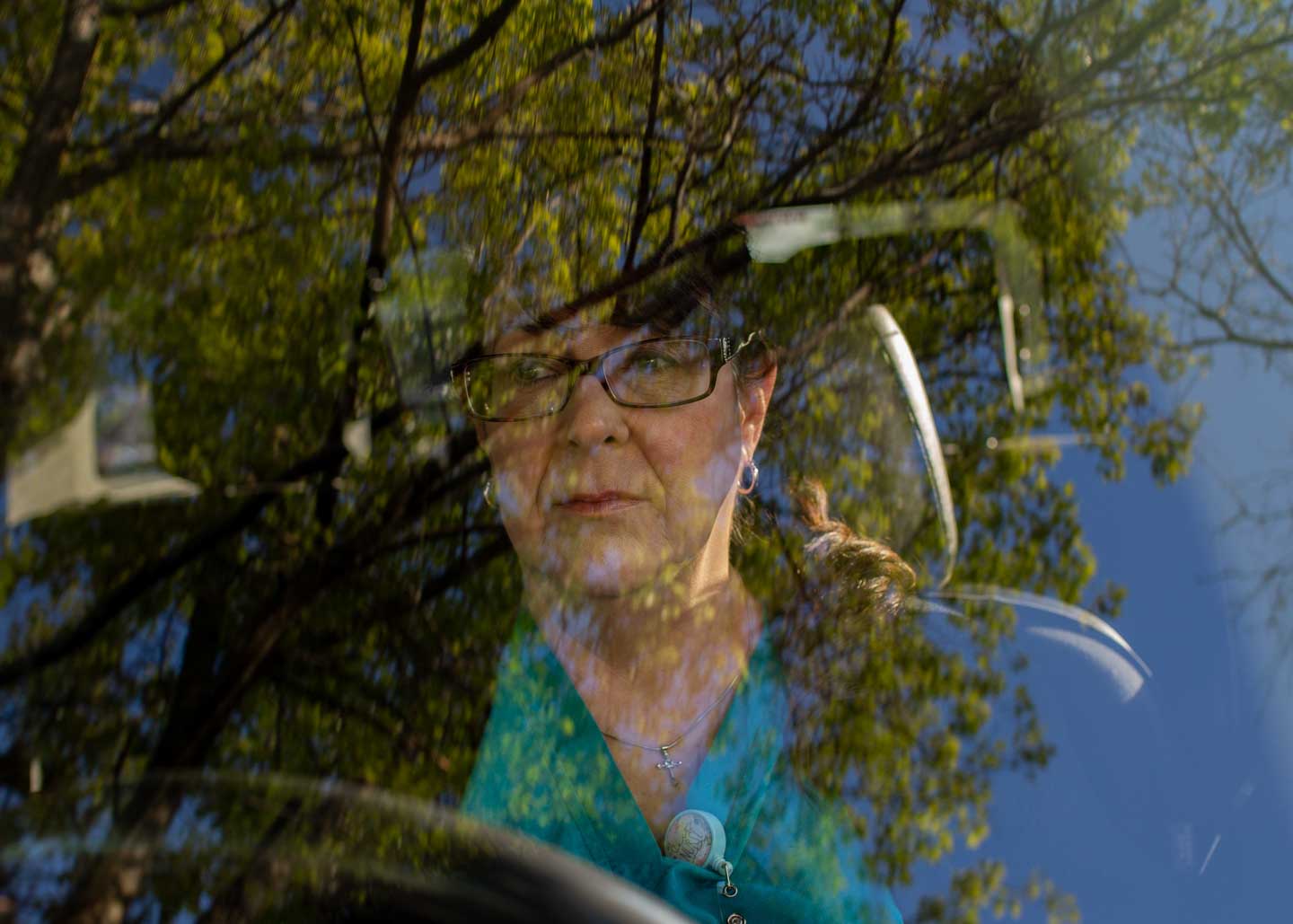 Teri sits in her car before her overnight shift as a hospice care nurse at Arkansas Hospice in Hot Springs. (Liz Sanders)

It was harder to track down the hospice care nurses, Joy, Teri, and Kallie. They knew dad at the most intense and final moments of his life, and when he was gone, so were they. 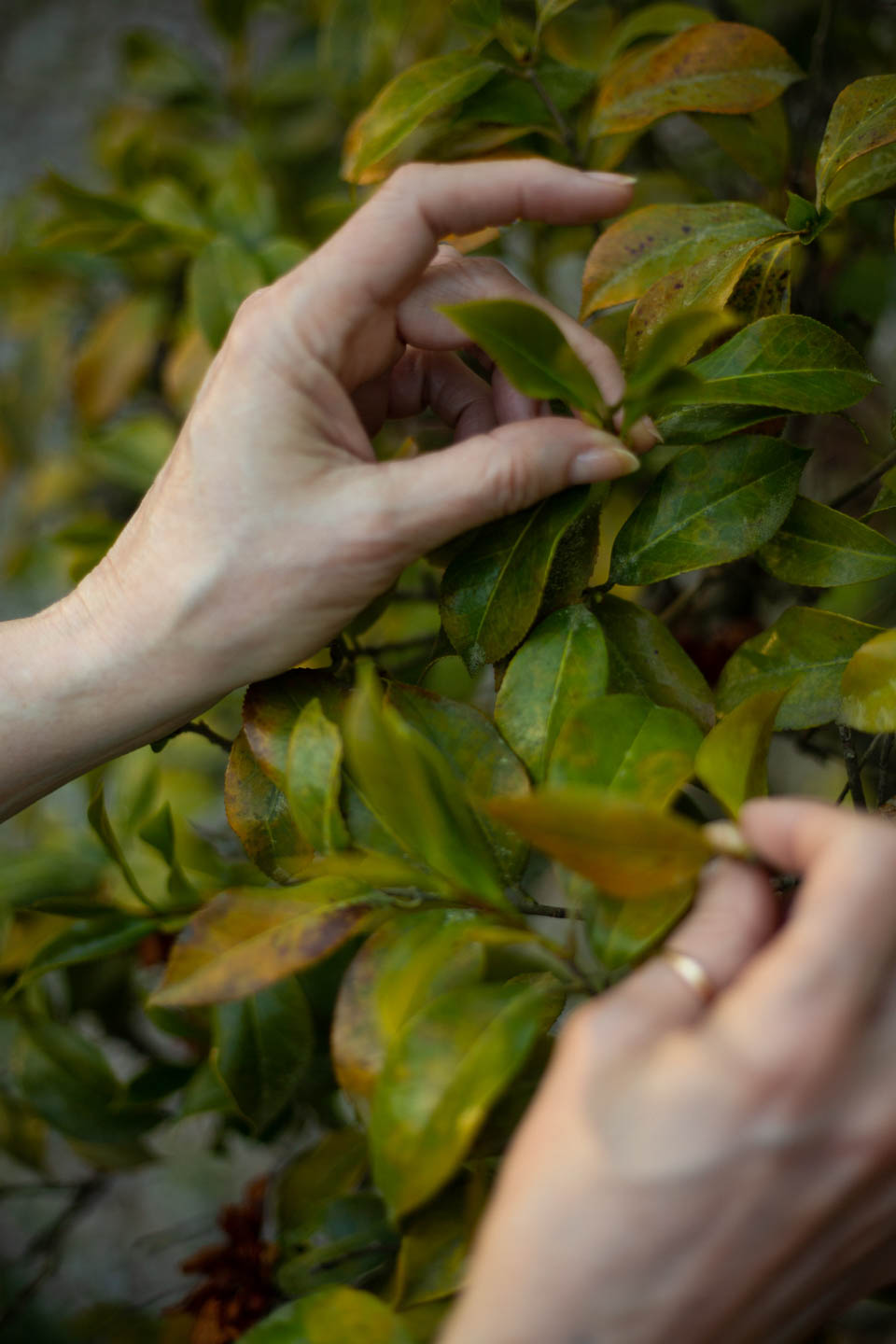 Teri cared for my dad during some of the most difficult moments of his life. (Liz Sanders)

When my dad was dying, Joy Speers kissed his forehead and stroked his brow. Now, in the face of the pandemic, that intimacy and kindness comes only through words behind the ever-present and necessary masks. This barrier, Teri Hendry said, feels “cold”—it is, however, the only way to prevent the virus from ravaging places where people are already at their most vulnerable.

When I asked Teri what was, for her, the hardest thing about working during the Covid-19 pandemic she said, “Seeing my patients die and their families not able to be with them.” She wasn’t even talking about Covid patients, either. In fact, in the Arkansas Hospice care floor housed in CHI St. Vincent hospital, she has yet to care for a confirmed Covid patient. So far, Arkansas has been spared the deluge of cases other states have faced—but there have still been over 2,000 confirmed cases in the state, and over 40 deaths. Governor Asa Hutchinson has said that May 4 is his goal to begin lifting restrictions that have been put in place because of the virus. 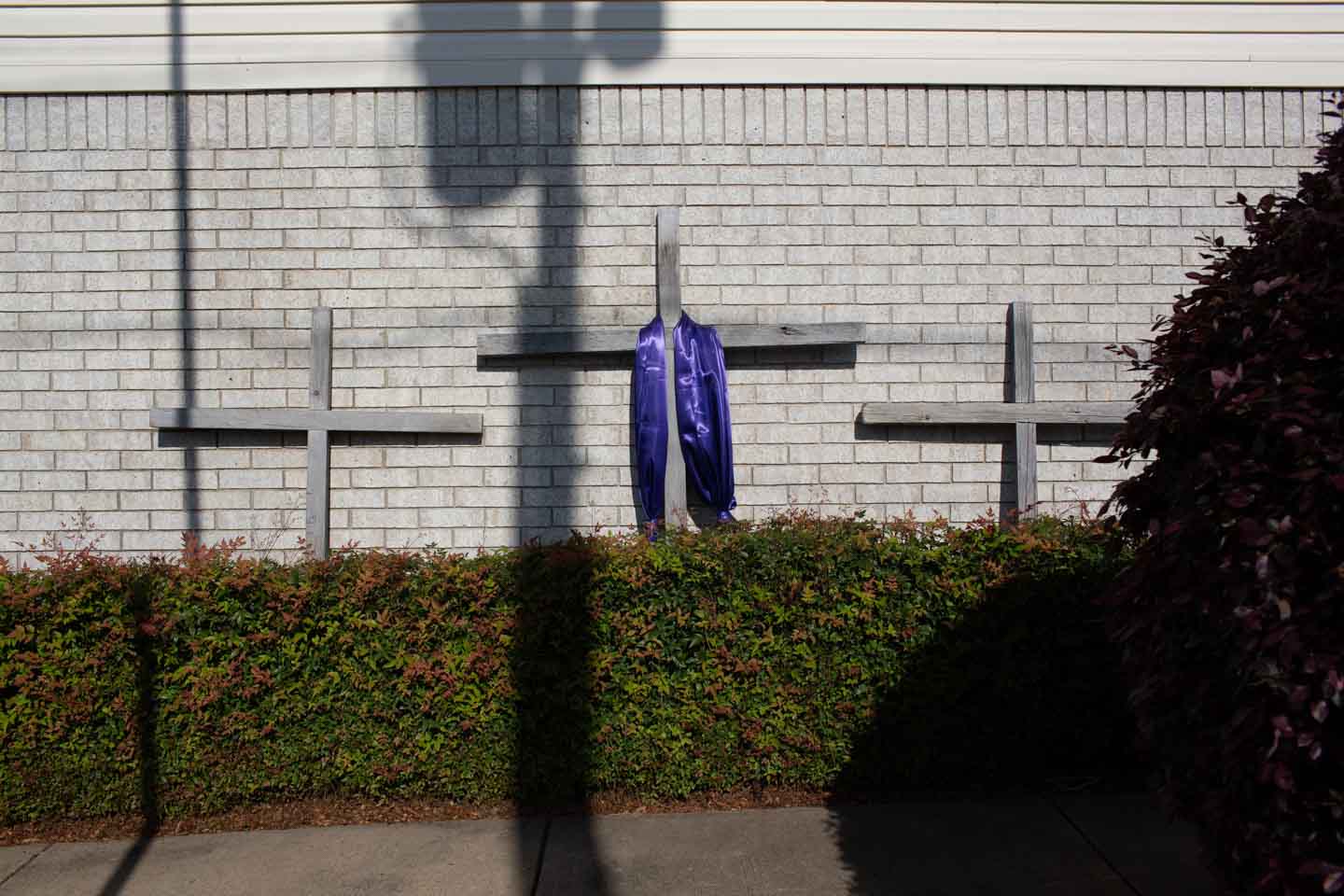 Arkansas is the only Southern state in which the governor has not issued a stay-at-home order, leaving employers and individuals to suss out the risks for themselves and make decisions to the best of their abilities. This has led to an inconsistent response, where some employers and individuals are following the strictest protocol, and others seem lax in ways that are puzzling. It is not uncommon to be in a public place and see some individuals decked out in gloves and masks and others taking no precautions at all. All of this tends to add a level of anxiety in the minds of the health care workers and a sense of not knowing whom to trust. 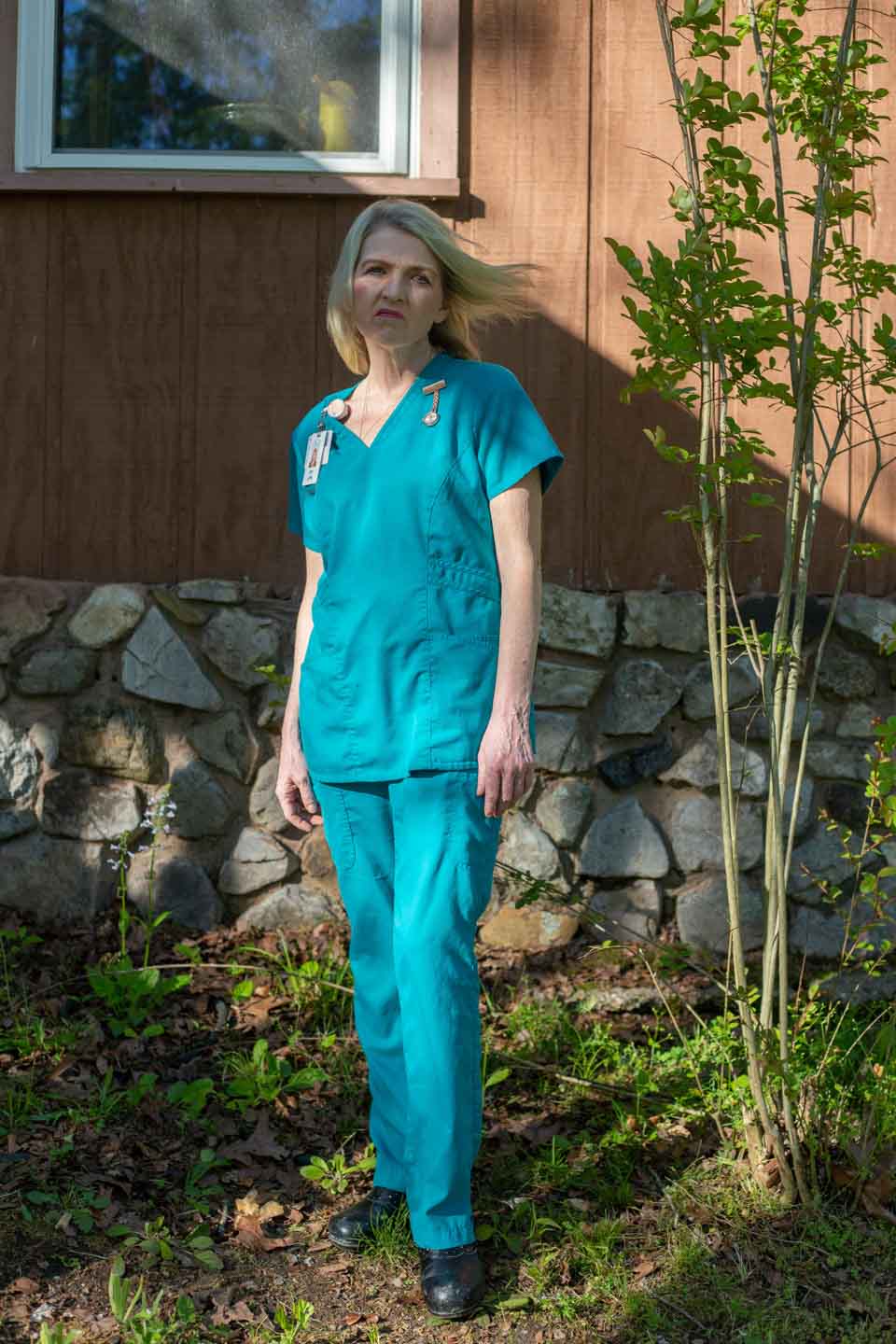 Joy in front of her sister’s home in Hot Springs. Joy has been a licensed practical nurse for 25 years and has worked in hospice care for 10 years. (Liz Sanders)

But the virus still touches all aspects of the care that health workers are providing for their patients. Because of the restrictions hospitals have rightfully set in place because of the virus, only two people are allowed to visit loved ones in the hospital in an entire day. After 9 pm, that number goes to one, until the next morning. As a photographer, I wasn’t even allowed to go inside the hospital at all, whether or not I wore personal protective equipment. 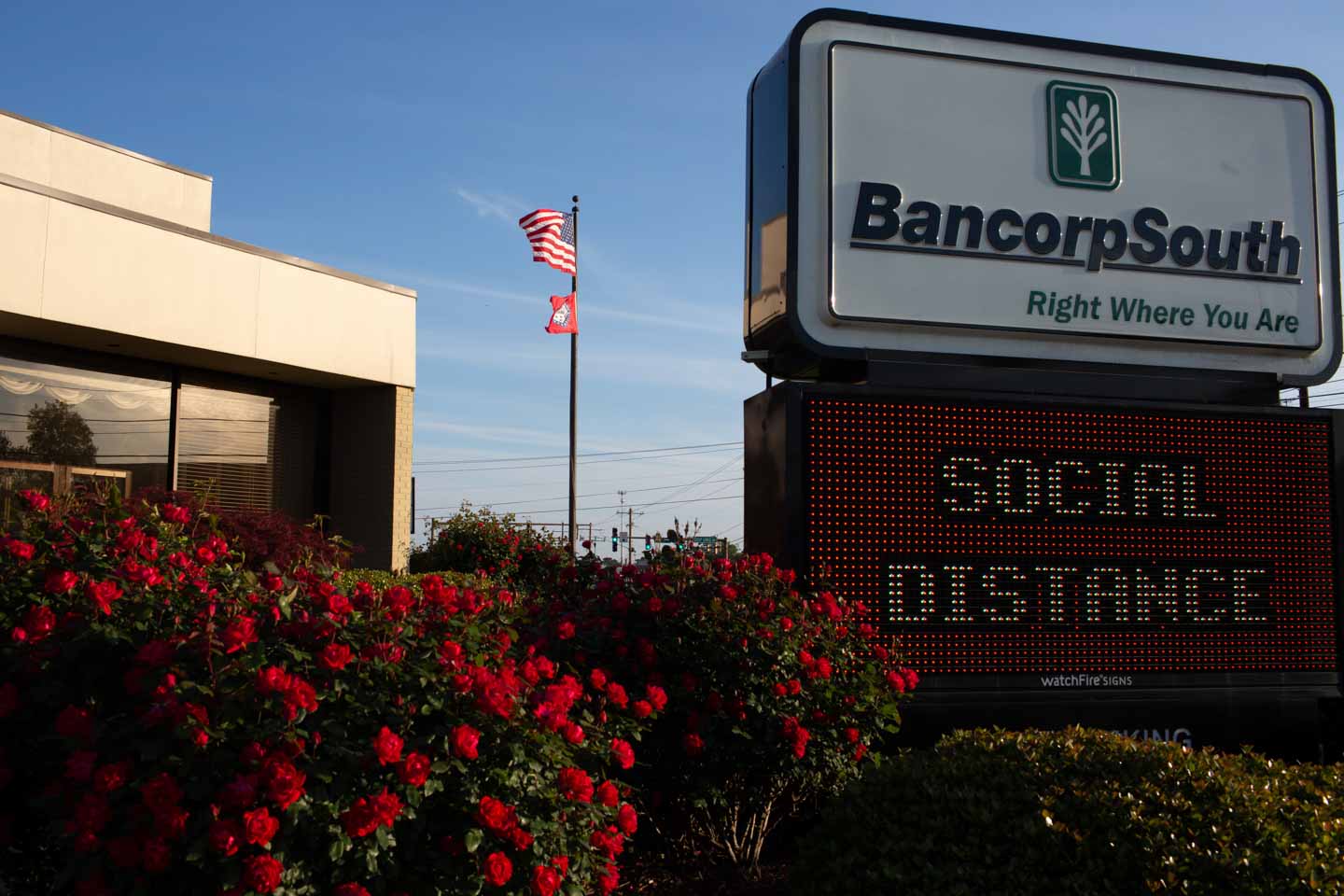 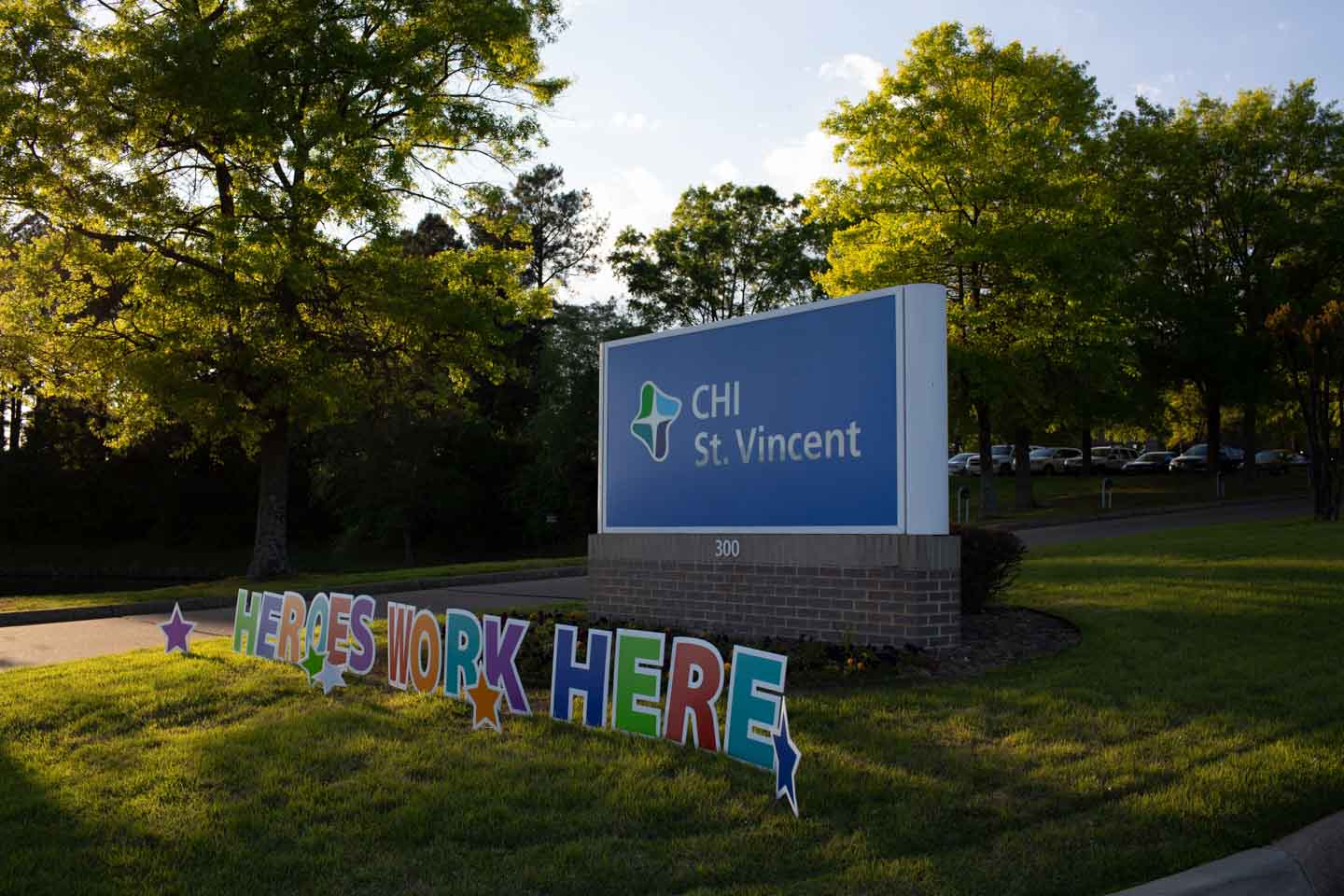 Recently, Teri told me, a man in hospice care was close to dying. It was 5 am and his wife was with him. She begged Teri to let her daughter come to the hospital to be with her father as he died, and, despite the rules, Teri ultimately allowed the daughter to come see her dad. It was a tough call, and too many patients aren’t able to be with their families at their time of greatest need. At the end of someone’s life, hospice nurses often spend weeks and months with patients, whom they come to love and connect with deeply. Covid-19 compromises closeness everywhere, and here, it keeps nurses like Teri and Joy from being able to show affection to their patients and their families. 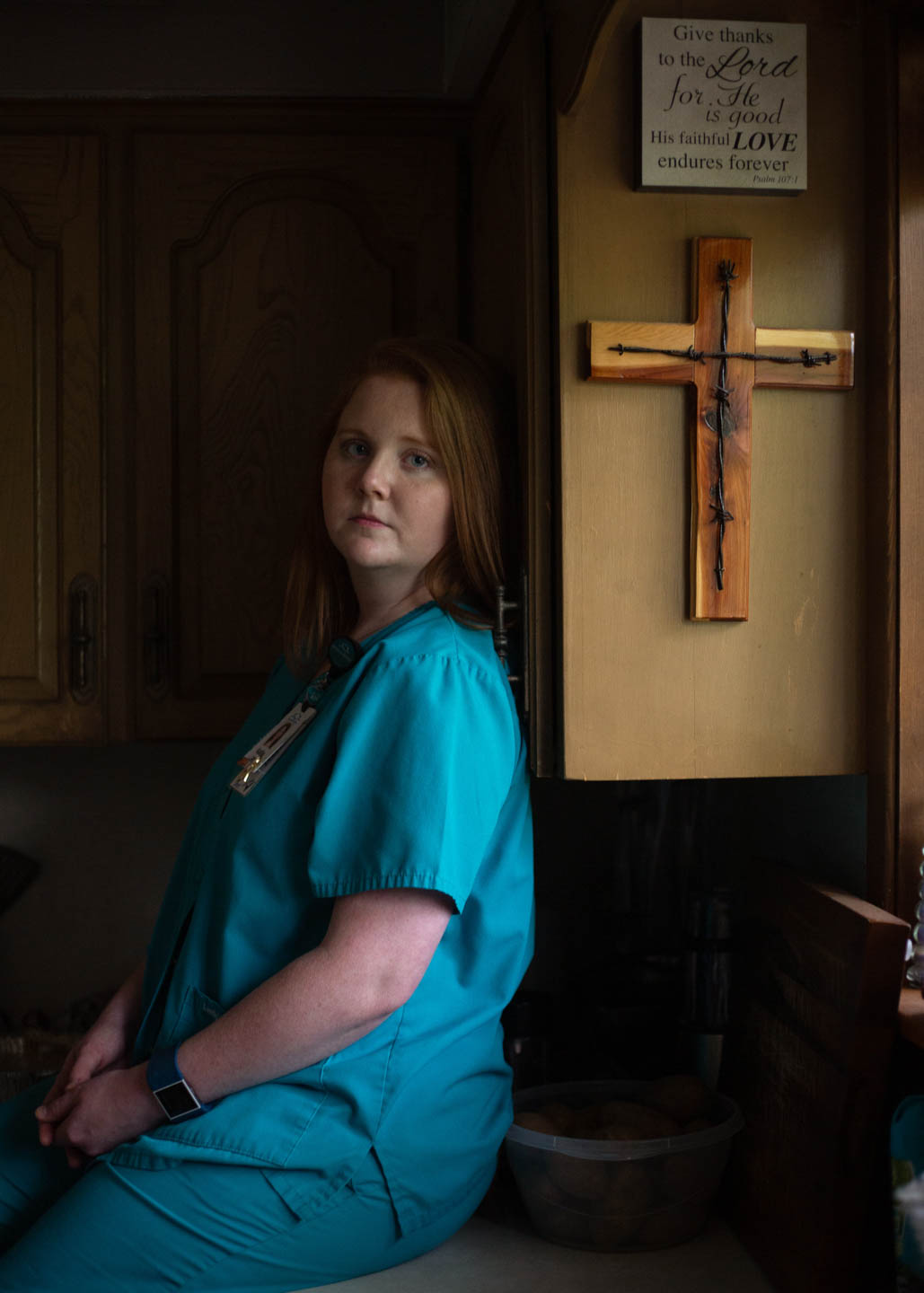 Kallie sits in her kitchen after her shift as a home hospice nurse for Arkansas Hospice. (Liz Sanders)

Beyond the emotional strain, there is the pandemic’s economic toll: Sherry, who has been a certified nursing assistant (CNA) for 17 years, is paid hourly and has seen her hours cut since the pandemic began. She is now left to budget as best as she can to support herself and her son, Tayveon. Because of her dip in hours, she recently applied for food stamps, but was denied because the local government said she made too much money to qualify. The work a CNA performs is some of the riskiest of all, as it involves close contact when bathing and helping patients with hygiene needs. Patients that were used to seeing Sherry at least once a week are now asking for her and other CNAs to come less often or not at all, for fear of contracting the virus. Some of Sherry’s patients are in nursing homes, and she is unable, due to nursing home policies, to visit those patients until further notice. 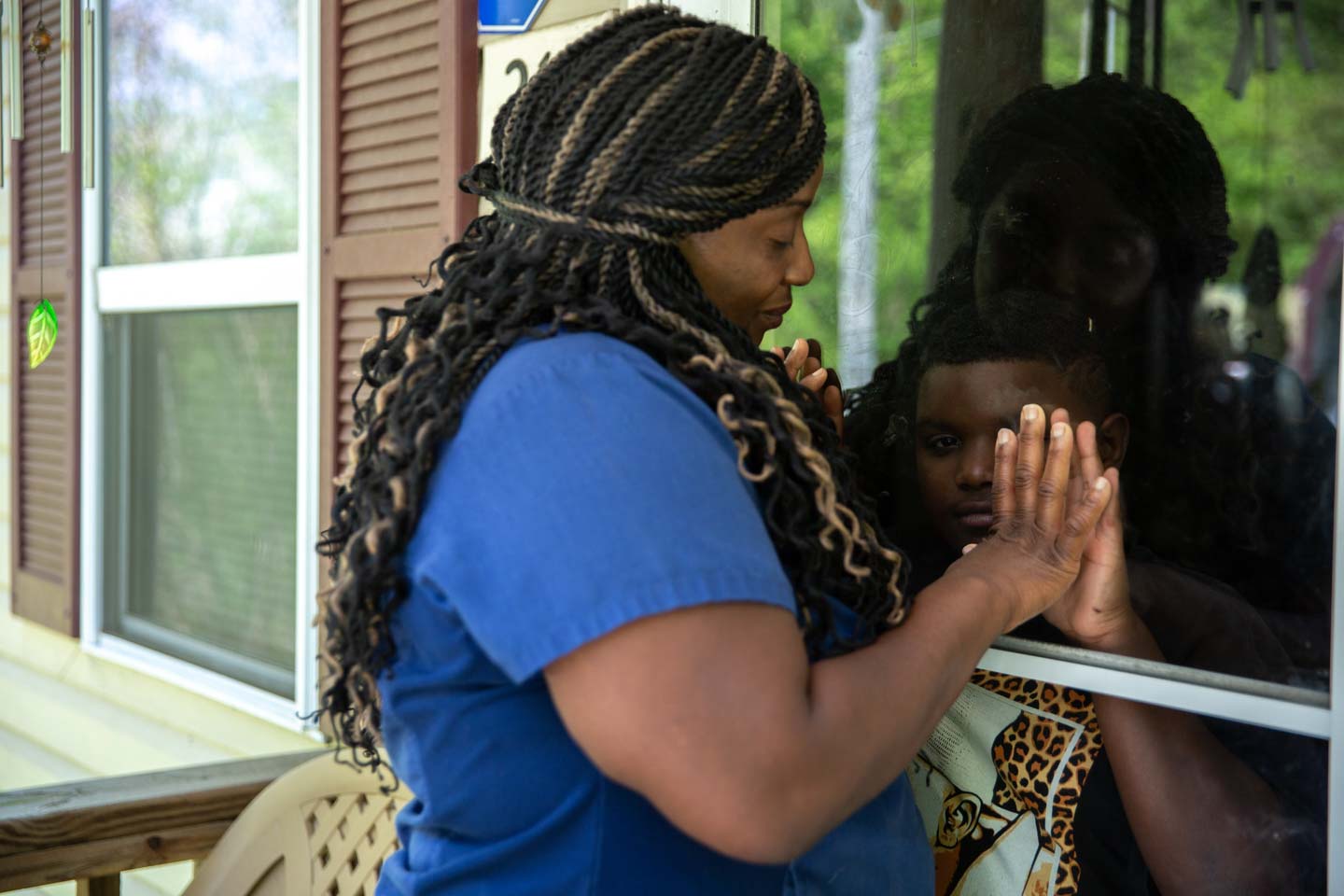 Sherry talks to her son Tayveon through the glass of her front door. Home from school like all other students in Arkansas, Tayveon spends most of his days at his dad’s house while his mom is at work. (Liz Sanders)

In this situation, all roles are shifting and every health care worker is being forced to adapt in whatever way they can. Kallie Lanham is 27, and has been a nurse for six years, two of which have been in hospice care. She told me that some facilities have locked supply closets to make sure supplies last until the virus subsides. Meetings are online, and no one enters the Arkansas Hospice building at all for the time being. She now makes home visits every 14 days instead of once a week. Kallie is a salaried employee and has often asked the CNAs she works with if they would like to deliver supplies for her in order to pad their hours and help keep their wages up. Kallie’s husband, Jack, is also a hospice nurse. When I asked her what it was like for them to be working together side by side in the same field, she told me the best part is being able to come home and have someone to cry with after a particularly bad day.

Kallie visited my dad and me in our home before we decided to move him to the hospital. I climbed up in bed next to him and I asked her if she would take pictures of us with my cell phone. Now a month later, the virus is still spreading and businesses are set to reopen soon—too soon, I worry. It feels like a lifetime before her kind gesture, or any like it, will be possible. 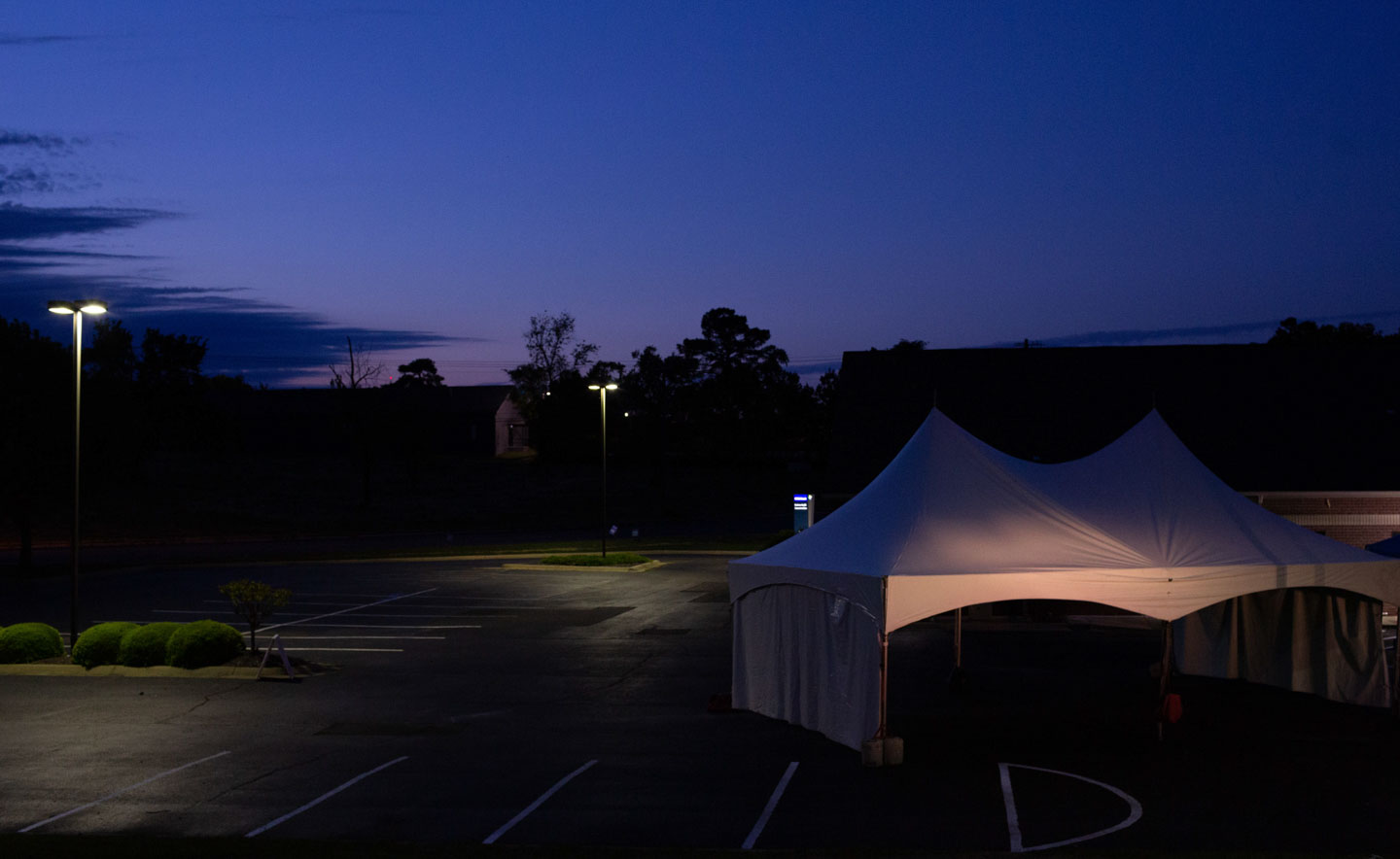 A Covid-19 testing tent in the parking lot of a hospital in Hot Springs. (Liz Sanders)