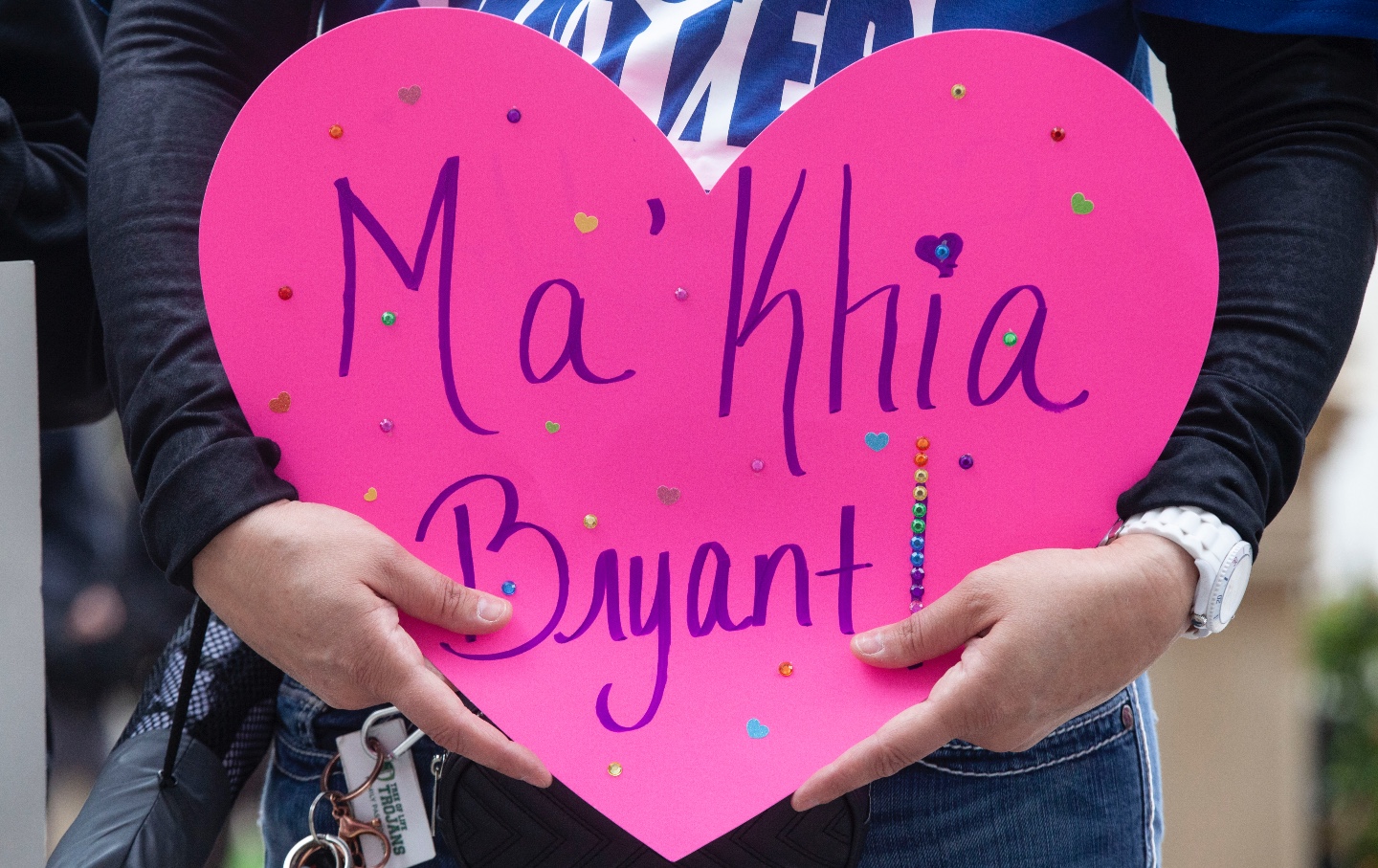 A Black Lives Matter activist holds a heart-shaped placard for Ma'Khia Bryant during a protest in front of the Ohio statehouse. (Stephen Zenner / SOPA Images / LightRocket via Getty Images)

White supremacy never stops. It never takes a day off. Its forces never quit the field of battle, even after a defeat. White supremacy doesn’t retreat; it retrenches.

On April 20, a Minneapolis jury found former police officer Derek Chauvin guilty of murdering George Floyd. The verdict came after months of nationwide protests and a three-week trial that was carried live on cable news. Chauvin’s conviction was the absolute minimum form of justice for Floyd’s family, but even that conviction was too much for some white nationalists. Hours after the verdict, white supremacist spokesperson Tucker Carlson went on television and suggested that the jury convicted Chauvin only because they were intimidated by the threat of “rioting” and property damage. Then he had a meltdown, which devolved into maniacal laughter, when a guest on his own show made the case for Chauvin’s guilt.

Other white-wing forces have taken the more subtle tack of arguing that the Chauvin verdict is proof that the criminal justice system “works.” The Wall Street Journal editorial board, for instance, took the opportunity to suggest that justice was always the likely outcome and that the protests that sprang up after Floyd’s murder were both wrong and unnecessary. Still other white commentators, like Ben Shapiro, have been promoting the idea that Black people are never satisfied and that a culture of victimhood prevents us from being happy with the outcome of the Chauvin trial. As always, white supremacists are pretty sure Black people should just be happy to be here, and any one of us who is not smiling and thankful under the yoke of unending white rule is a dangerous Negro who should go back to somewhere else.

The police, the people empowered to turn systemic racism into state-sponsored terrorism, remain totally unbowed by the conviction of a single cop. At the very moment the verdict against Chauvin was being read in Minneapolis, police in Columbus, Ohio, shot 16-year-old Ma’Khia Bryant to death. Cops couldn’t wait until the close of business on the day George Floyd’s family found some measure of justice before killing another Black person.

I am obligated to say that Bryant was brandishing what appeared to be a kitchen knife at the moment she was shot by the police. I have to say that because, if I don’t, some white people will inevitably accuse me of avoiding the issue, and the very worst will accuse me of smearing the officer. I have to say that because the existence of that knife is why the officer will never be brought to justice. I have to surface the cop’s justification for gunning down a teenager less than a minute after arriving on the scene because the guardians of white ascendancy will simply not allow me to declare that shooting a Black teenage girl is a crime.

That’s the relentlessness of white supremacy. Every trauma must be dissected, every pain must be justified, and the prevailing white majority claims the sole right to determine whether those pains and traumas are legitimate, as if white people are the sovereigns of reality itself.

Even in the privacy of my own mind, the knowledge that most white people can only see the horrors of their police if Black people die in the appropriate, submissive way gnaws at me. When I saw the body camera footage of Bryant’s death, I exclaimed, “Damn it”—not because they killed another Black person who should have been allowed to live but because I knew they’d get away with it.

And we’re never given one day of peace.