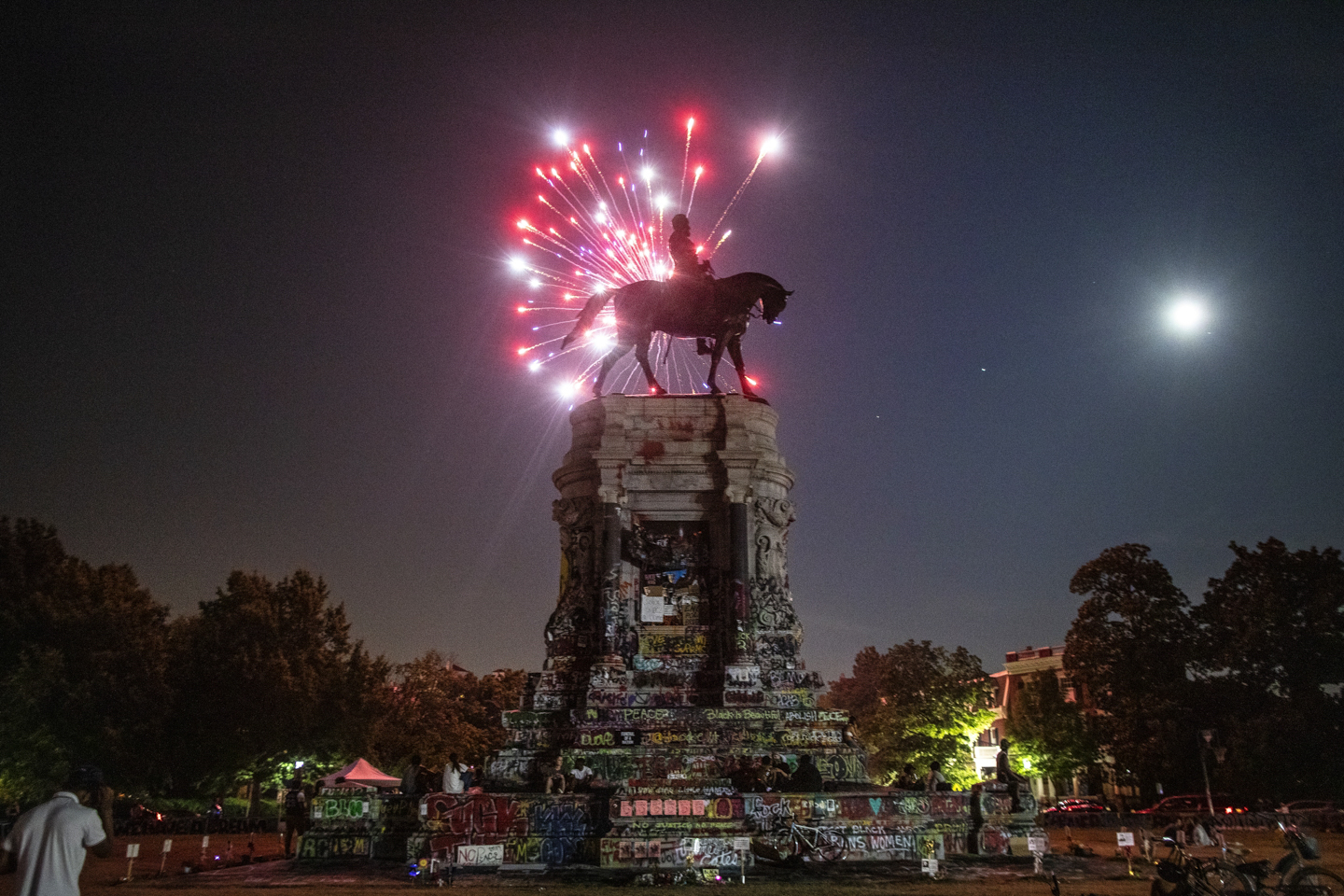 Fourth of July at the newly renamed Marcus Davis Peters Circle, the site of the Robert E. Lee Memorial that has become the epicenter of the Black Lives Matter movement in Richmond, Va. (Katie Orlinsky)

The Nation and Magnum Foundation are partnering on a visual chronicle of untold stories of the coronavirus crisis and the struggle for racial justice—read more from The Invisible Front Line. —The Editors1

ichmond, a.—I have been living on and off in Richmond for the past few years, and like most people here, I avoided Monument Avenue. The avenue runs through the heart of Richmond and, apart from one statue of the Richmond native tennis star and humanitarian Arthur Ashe built in 1996, featured a string of five monuments memorializing confederate leaders: Stonewall Jackson, J.E.B. Stuart, Jefferson Davis, Matthew Fontaine Maury, and Robert E. Lee. All of these men fought and died for the right to enslave and dehumanize Black men and women. These symbols of racist violence and white supremacy have loomed over the people of Richmond, the majority of whom are Black, for over 130 years. Now, in a flash, only one is left standing.2 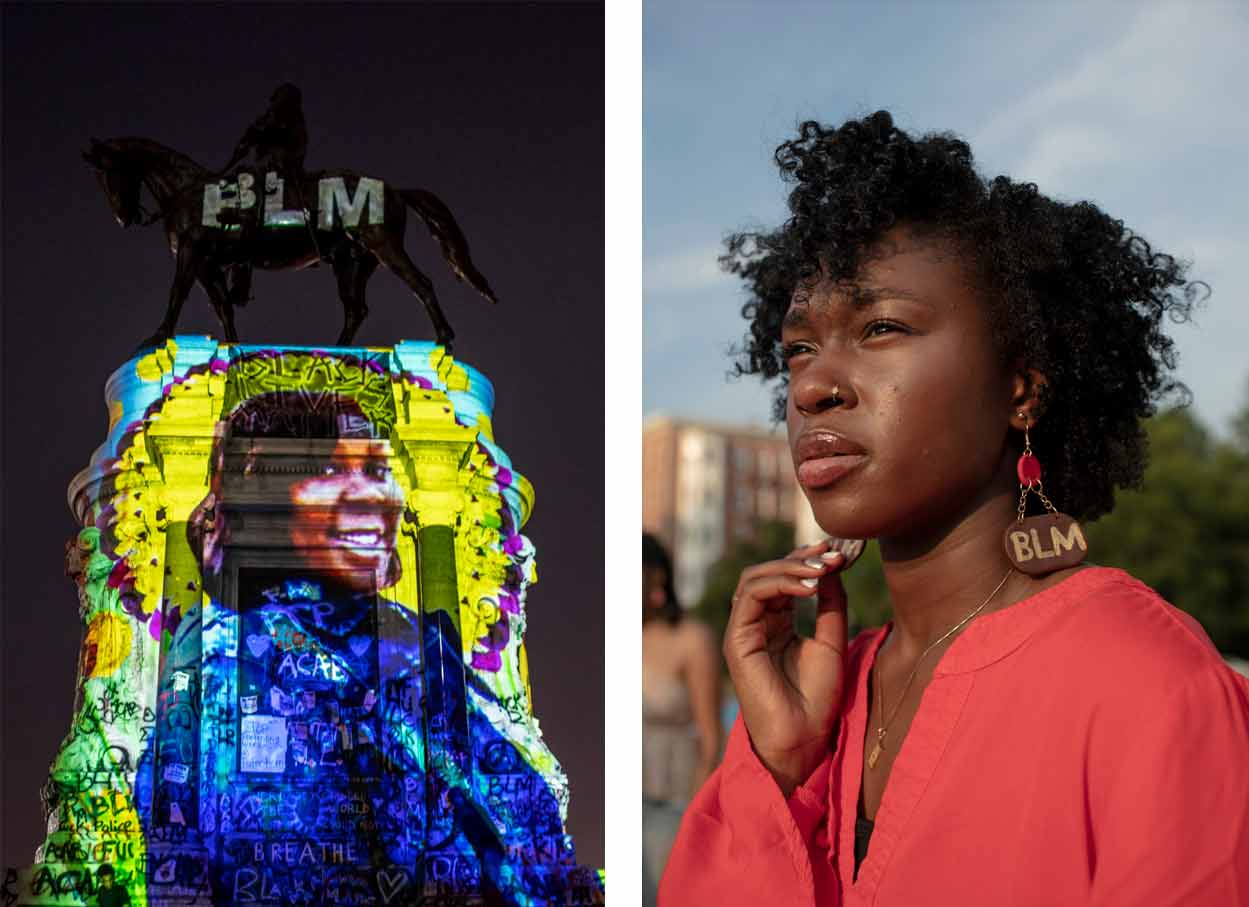 Left: an image of Breonna Taylor is projected onto the Robert E. Lee Memorial monument on the Fourth of July. Right: Jenica Miller at the newly renamed Marcus Davis Peters Circle. (Katie Orlinsky) 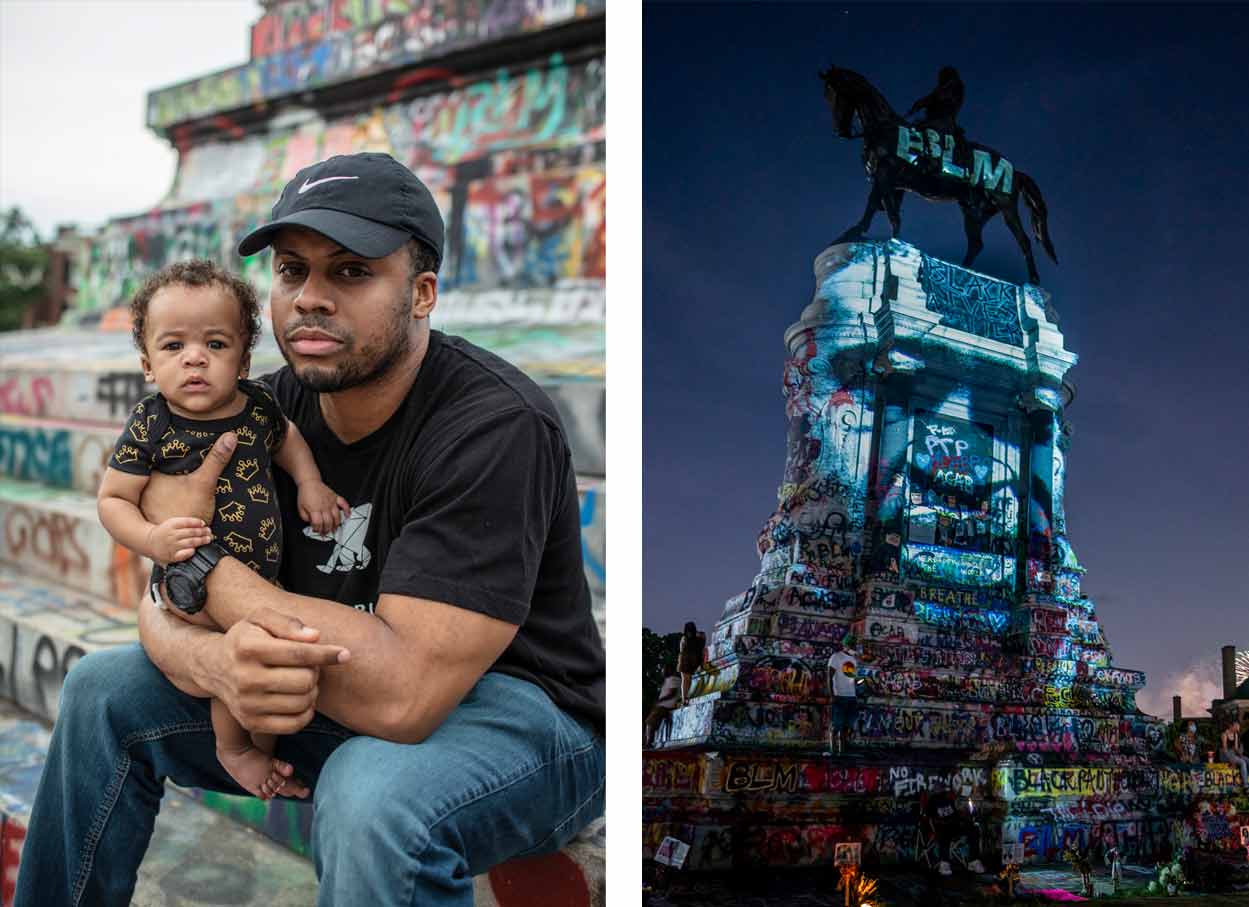 Left: A father and son pose at the newly renamed Marcus Davis Peters Circle. Right: An image of George Floyd is projected onto the Robert E. Lee Memorial monument on the Fourth of July. (Katie Orlinsky)

Over the past month, the former capital of the Confederacy has become a national epicenter of the Black Lives Matter movement, with the tallest and most prominent of all the city’s racist shrines, the Robert E. Lee Memorial, its focal point. The Lee Memorial is now covered from top to bottom with anti-racist art and graffiti, and the surrounding area has been reclaimed as the Marcus David Peters Circle, after an unarmed 24-year-old Black man who was killed by Richmond police in 2018 while suffering a mental health emergency.3 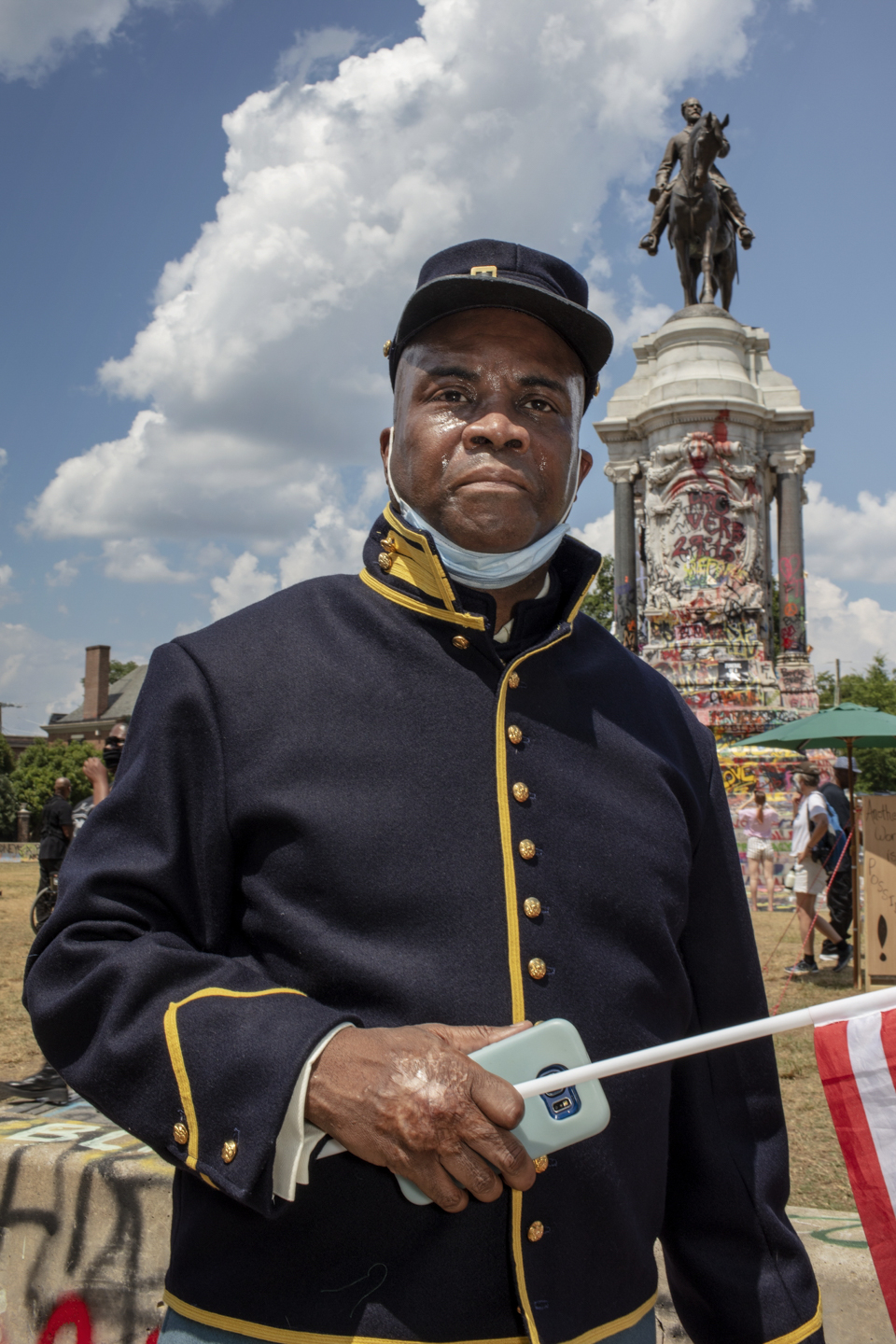 On the Fourth of July, William Thorpe and fellow members of the Union Soldiers Campaign march around the statue of Robert E. Lee in Richmond, Virginia. The campaign seeks to replace the statue with a symbol that represents “freedom for all” and “America’s values now.” (Katie Orlinsky)

The transformation and revitalization of what used to be an oppressive and uninviting space is breathtaking: Every day for over a month, people of all ages, both local and from out of town, have been visiting the Marcus David Peters Circle to witness history in the making. They climb all over the colorfully spray-painted base of the monument, take pictures, write graffiti, draw pictures, play music, spin records, shoot basketball, kick soccer balls, dance, socialize, and have water balloon fights. Activist encampments and booths providing food, water and hand sanitizer surround the circle, as well as a radical library, pop up gardens, and a nightly projection that drapes the of south side of the monument in images of victims of police violence, Black leaders, and film clips of civil rights speeches. Parents come to the site to teach their children, and other parents to mourn their children lost to police violence.4 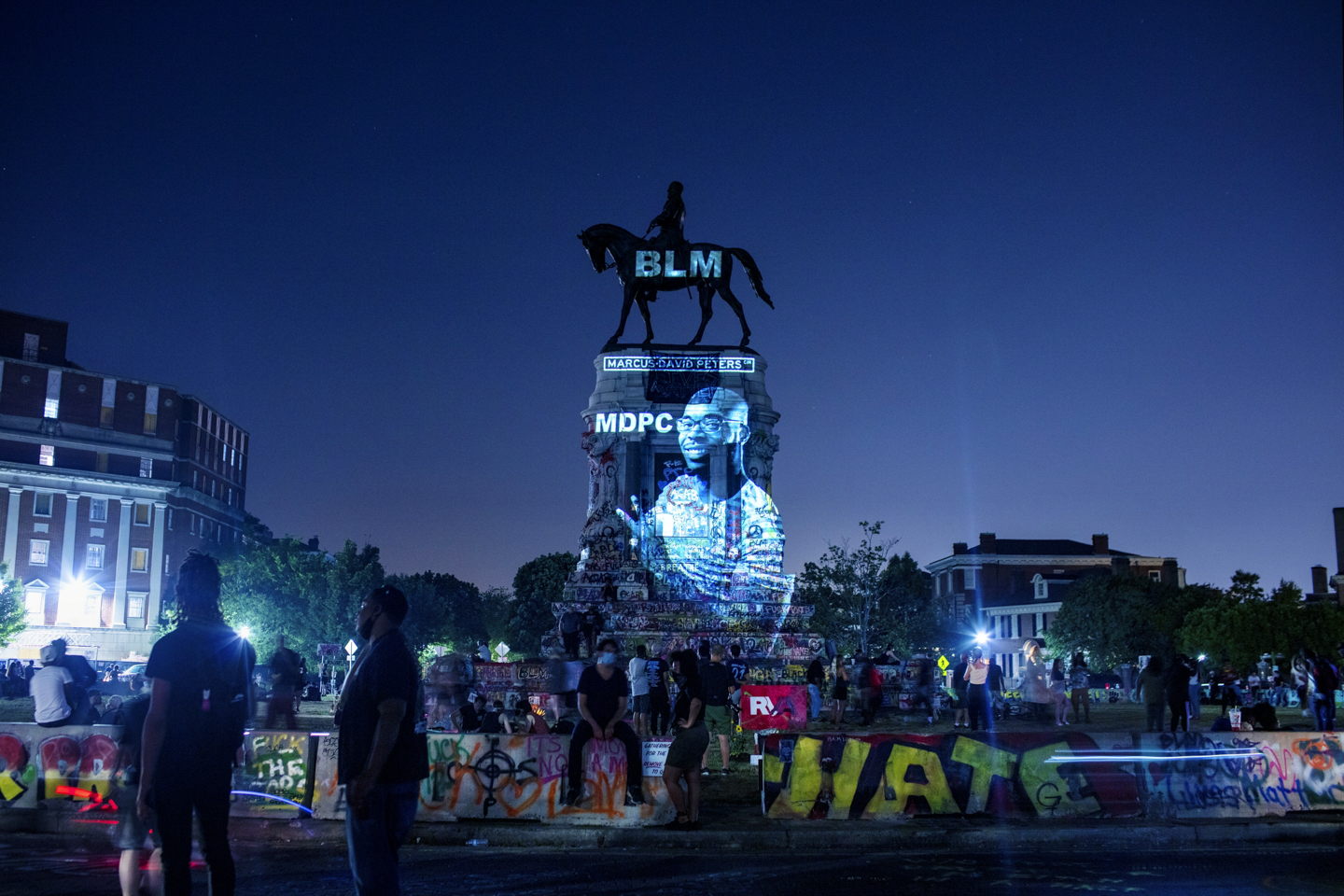 An image of Marcus Davis Peters, a 24-year-old Black man who was killed by the Richmond Police in 2018 while suffering a mental health emergency, is projected onto the Robert E. Lee Memorial monument on the Fourth of July. (Katie Orlinsky)

I spent one afternoon with Emily DeCarlo, the mother of 31-year-old Angel DeCarlo, who was shot and killed by a Hopewell, Va., police officer in 2018. At the base of the monument, Emily built a shrine of candles, flowers, photos, and words telling the story of her slain daughter. The day we met, she also brought a blanket imprinted with Angel’s image and one of her daughter’s favorite possessions, a crown of sparkly white feathers.5 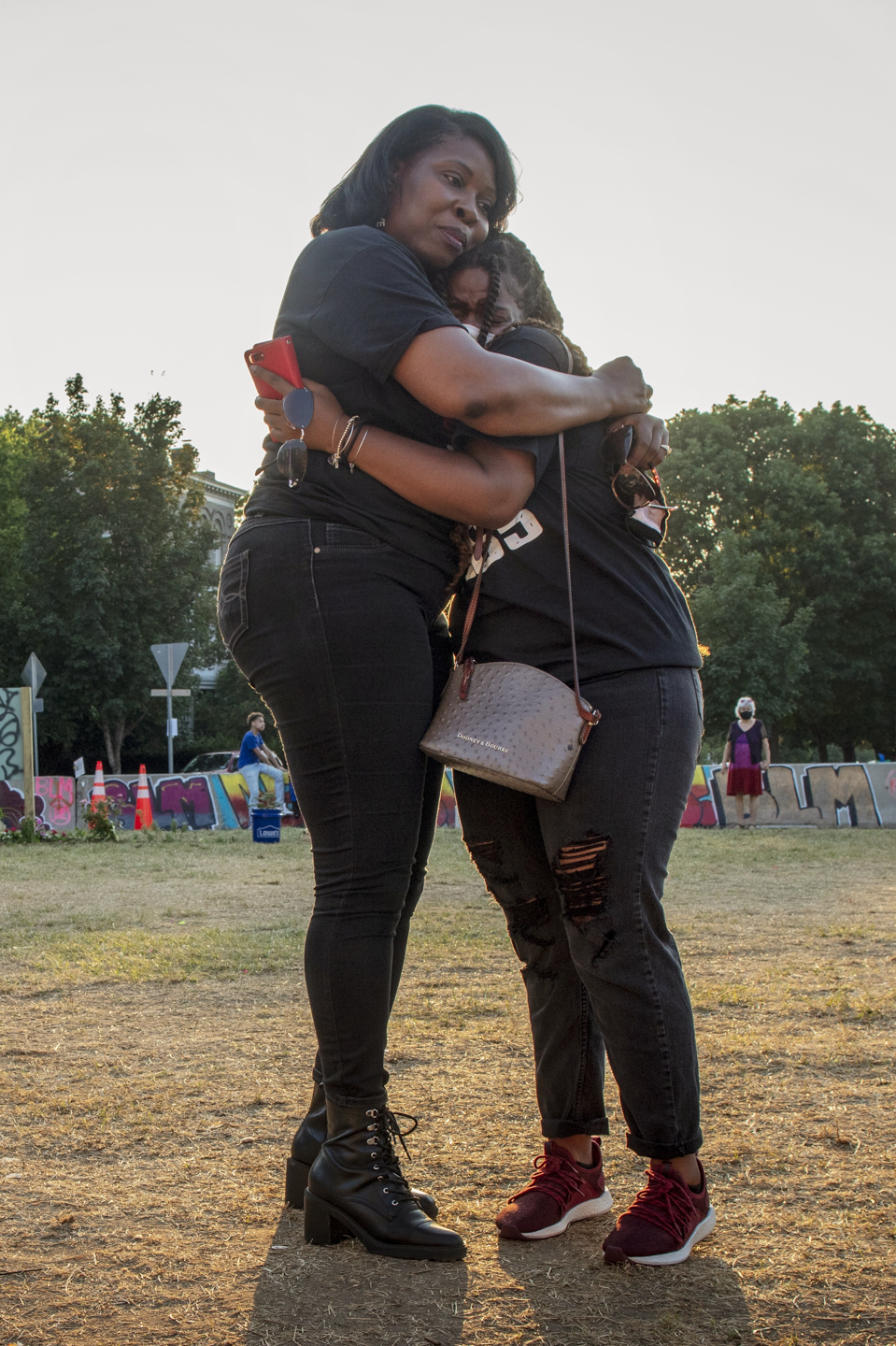 On the Fourth of July, a mother and daughter embrace while reading the memorial shrines to Black men and women killed by police violence that surround the base of the Robert E. Lee statue. (Katie Orlinsky)

Emily told me how Angel wanted to be a star and loved to sing, dance, and make recordings: “She was so much more than what she was portrayed to be by the police.” Angel DeCarlo was murdered by a police officer who claims that DeCarlo matched the description of a nearby robbery suspect and that she pointed a handgun at officers after ignoring their commands to stop running. But Emily says, “He’s lying. Other witnesses know he’s lying. And he knows he’s lying.” According to Emily, Angel did not own a gun, but she did have ample reason to fear the police. Angel suffered from mental health issues, and had recently been arrested and imprisoned for two months for “failure to identify to a police officer” during a manic episode, instead of being provided the mental healthcare she so desperately needed. When she was finally released, she was required to see a case manager three times before she qualified for inpatient mental health hospitalization—when she was killed, she had one case manager visit left to go.6 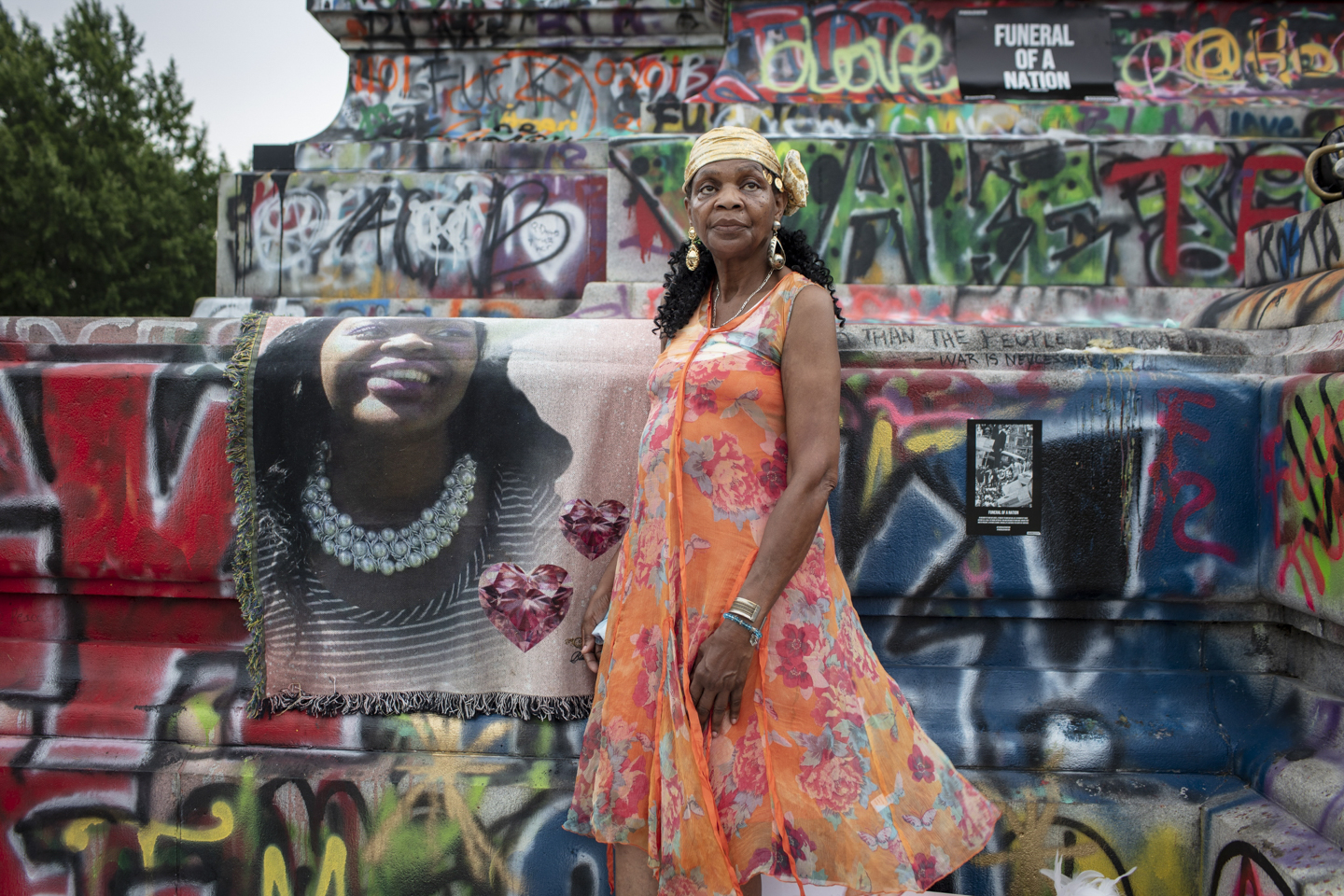 Emily DeCarlo, whose daughter, Angel DeCarlo, was killed by police, poses in front of a blanket with an image of her daughter on it, at the newly renamed Marcus Davis Peters Circle at the site of the Robert E. Lee Memorial. (Katie Orlinsky)

Emily hopes that the renewed focus on police violence will bring long overdue attention to her daughter’s case, but she also wants a place to share stories and remember her daughter in public, to make her pain and loss visible in a space reclaimed as a monument and memorial to Black lives. In addition to Angel’s, I counted 42 memorials dedicated to Black men and women killed by the police surrounding the statue’s base.7

By and large, the atmosphere at the Marcus David Peters Circle is peaceful and inspiring—almost everyone I spoke to who was visiting the area for the first time commented on the undeniable “good vibes.” Up until late June, local media coverage of the Lee monument was dominated by the frequent standoffs between protesters and police trying to clear the area at night, sometimes with tear gas and rubber bullets, and dozens of people have been arrested. Sometimes during the day, cars drive by to hurl insults or throw things into the circle, and activists have formed a small, armed security detail of their own. However, for the past week, and since I have been documenting the circle, things seem to have remained calm and with minimal police presence.8

After activists took it upon themselves to remove some of the smaller statues commemorating anti-black violence and settler colonialism (including a bust of Christopher Columbus, which was dragged into a lake), the city has been systematically removing the remaining statues. This week I joined hundreds of onlookers to witness the removal of the Confederate Soldiers and Sailors Statue and one of the last Confederate statues left on Monument Avenue, that of Stuart. Now only the 14-foot-tall bronze sculpture of Lee on horseback remains. The process of removing Lee is being held up in court by a descendant of the couple who signed a deed giving the monument’s land to the State of Virginia, yet everyone from the mayor of Richmond to the governor of Virginia have called for its removal.9 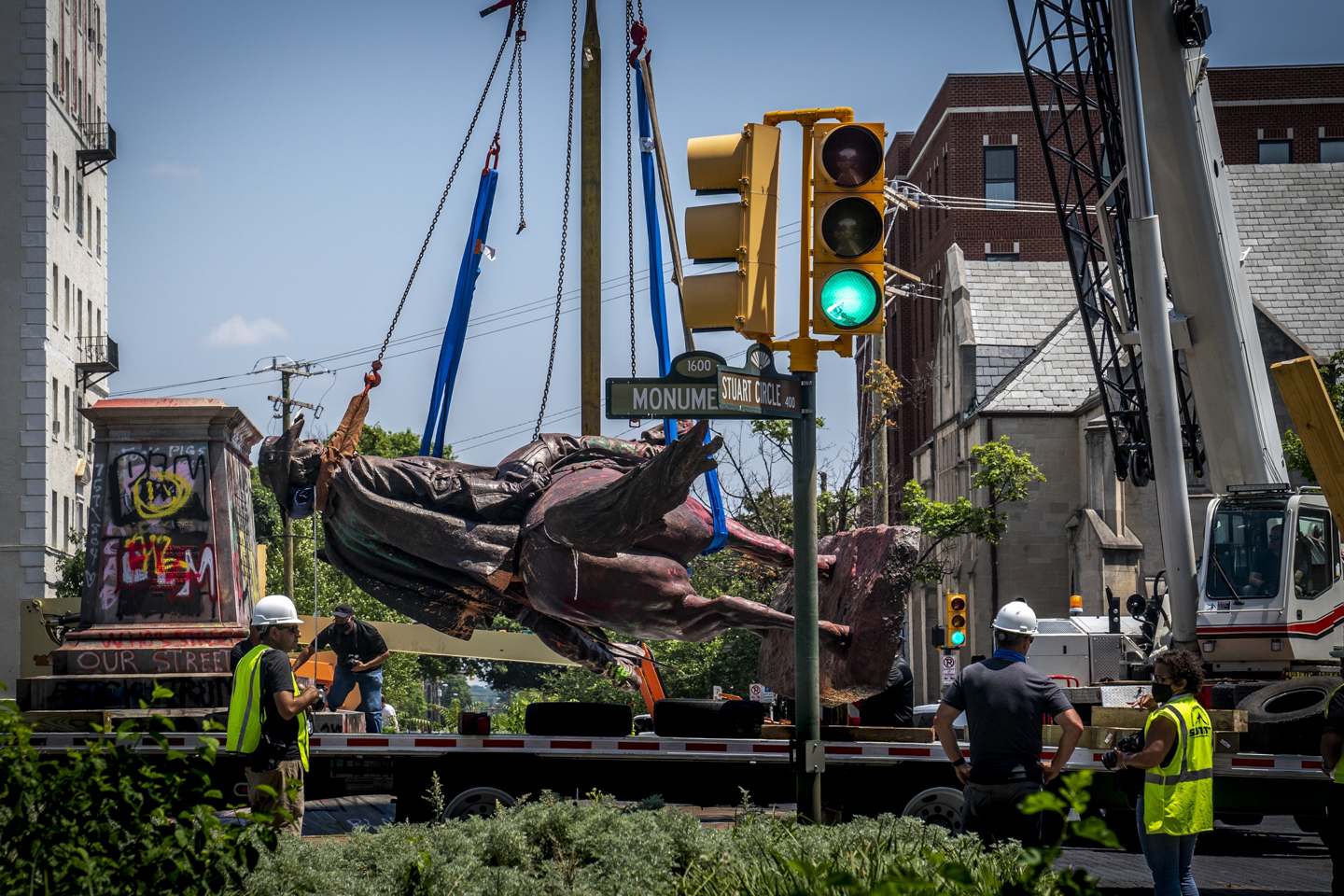 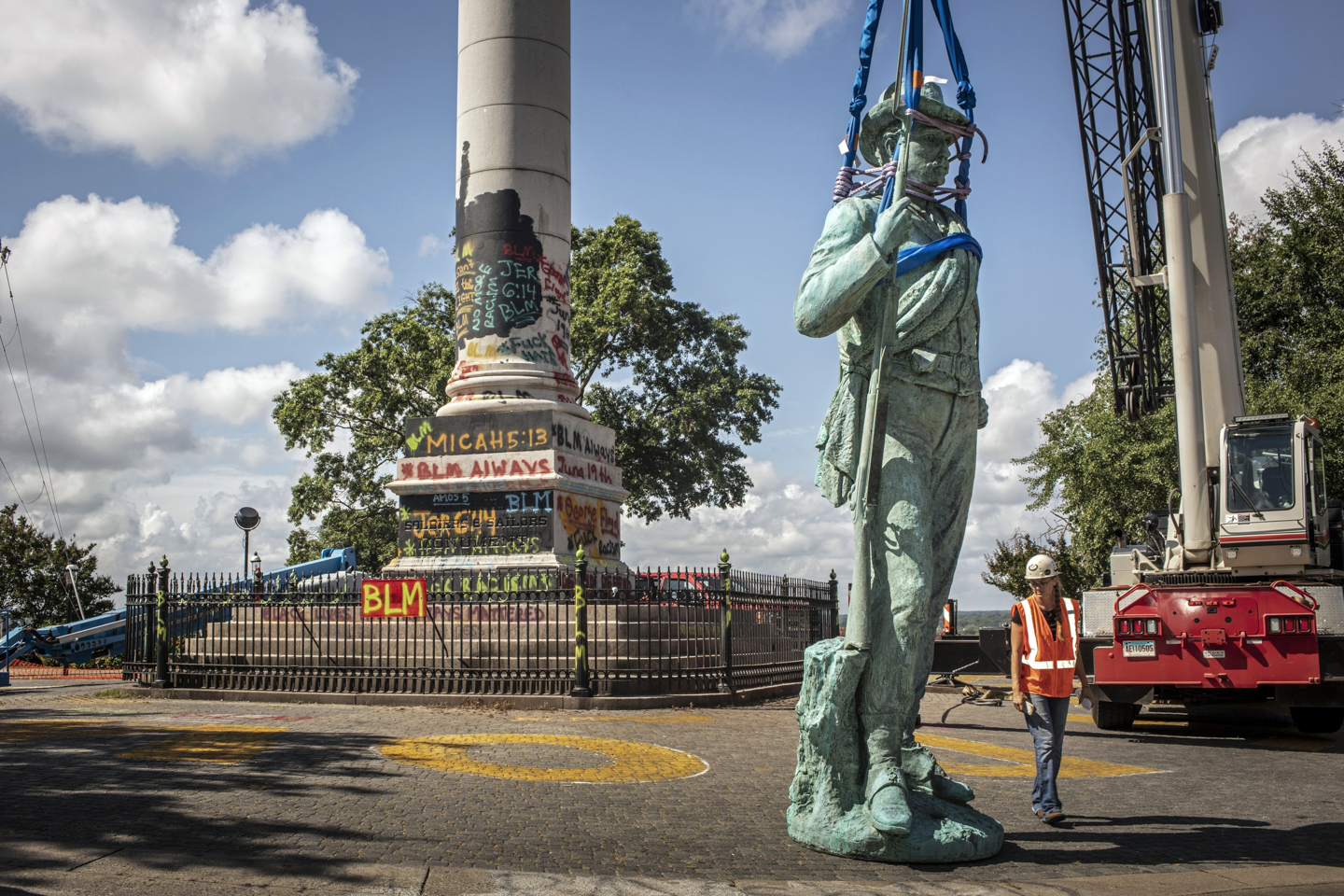 The Confederate Sailors and Soldiers Statue is removed from the Libby Hill Park in Richmond. (Katie Orlinsky) 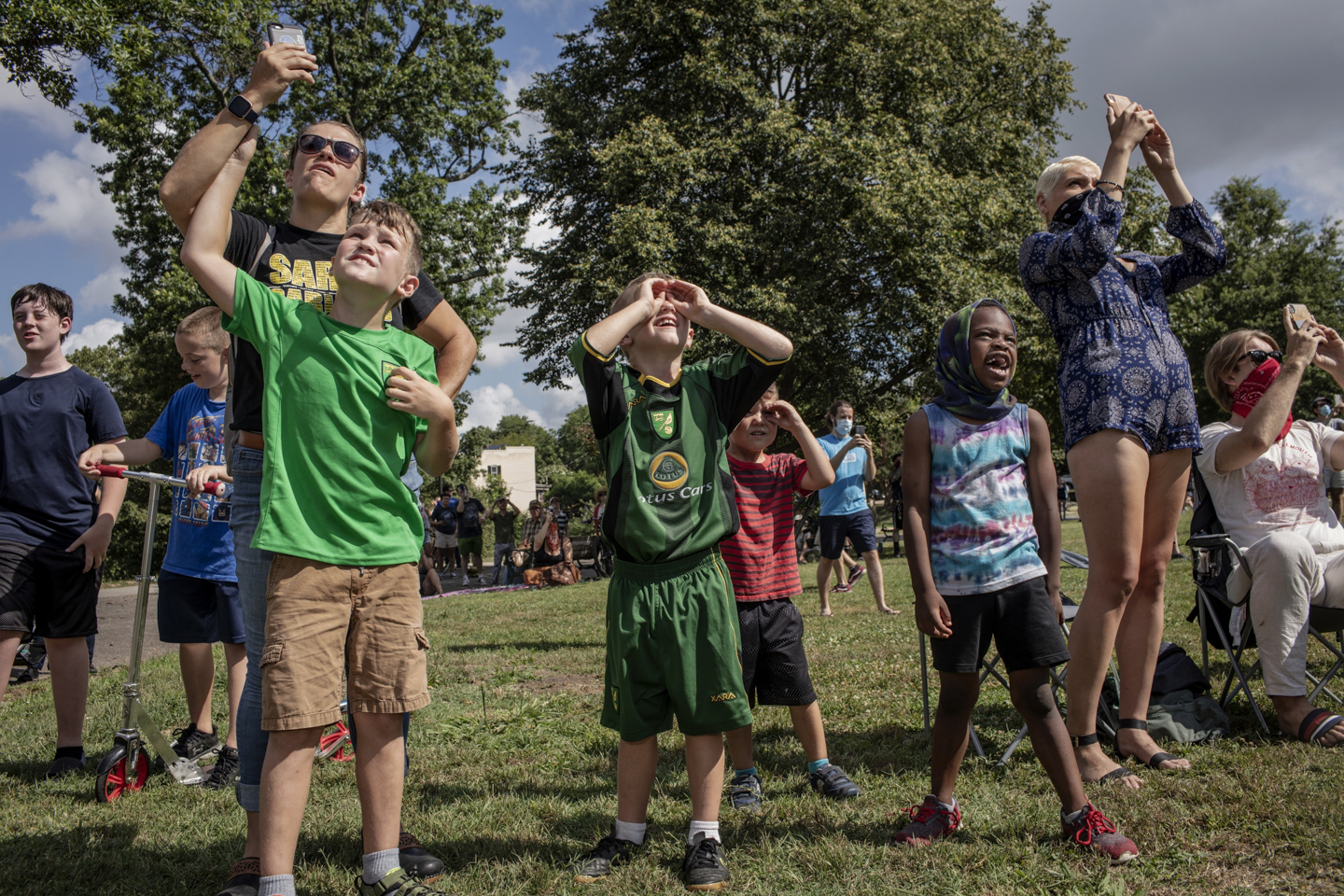 Crowds cheer as the Confederate Sailors and Soldiers Statue is removed. (Katie Orlinsky)

Meanwhile, these statue removals have been criticized by some as nothing more than baby steps in the greater battle against systemic racism and police violence. Activists, led in part by Marcus Davis Peters’s mother and the local anti–police violence organization Justice and Reformation, have been calling for much more than symbolic gestures. Their demands include a Marcus Alert to insure that mental health professionals, as opposed to armed and improperly trained police officers, are first responders in situations like the one that killed Peters and put Angel DeCarlo in jail. They also call for defunding the police (with funds reallocated to public education, human services, the environment, and general community welfare), an independent civilian review board with subpoena power to investigate claims of police abuse, the reopening of the Peters case, the dropping of all charges against all community members who have been arrested in connection with this current cycle of protests, and lastly, the removal of all of Richmond’s Confederate monuments.10 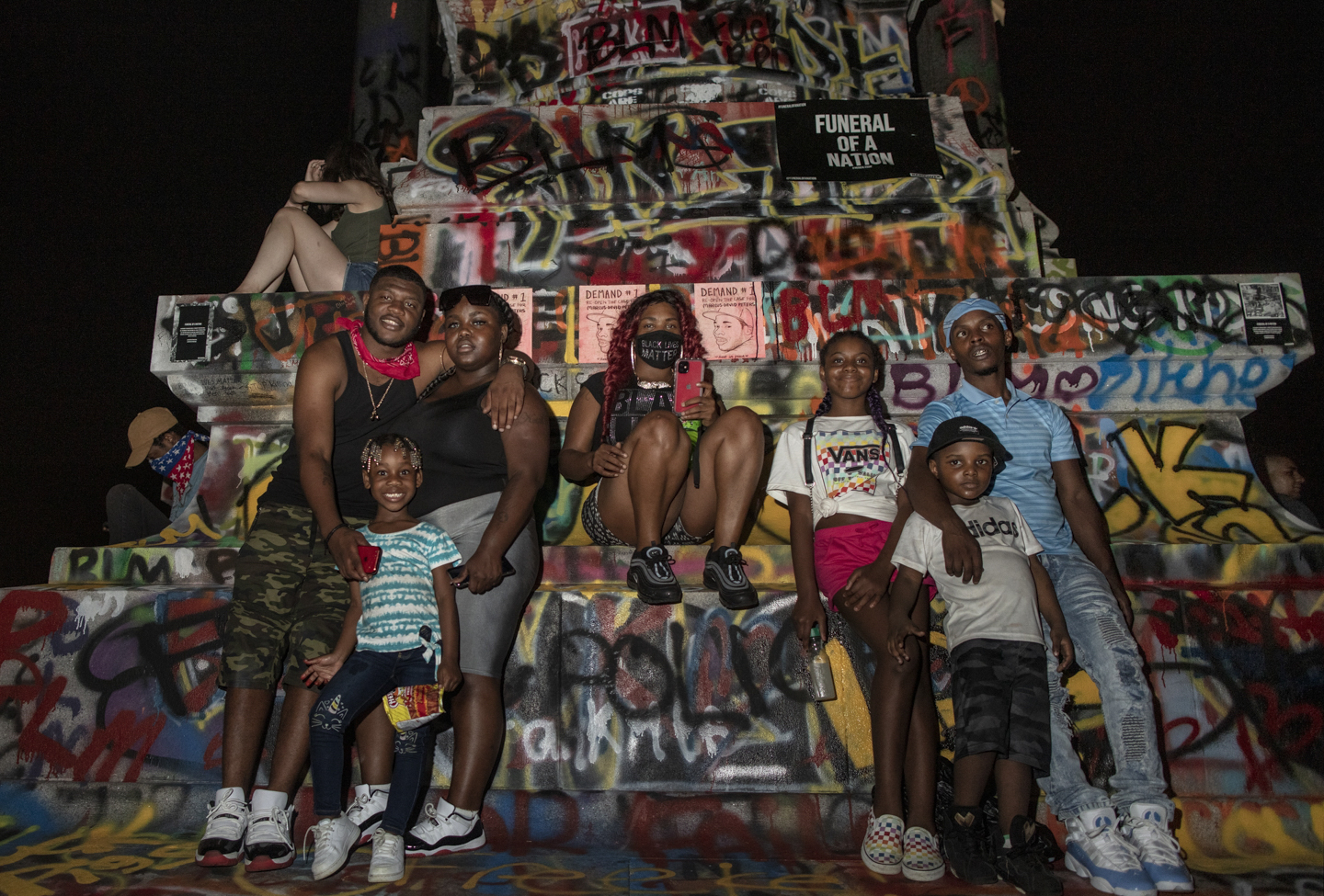 The Hammond family from Richmond, Virginia on the Fourth of July at the newly renamed Marcus Davis Peters Circle. (Katie Orlinsky)

For now, Marcus Davis Peters Circle on Monument Avenue serves as the hub for all this organizing. In less than a month, a former monument to the Confederacy has become a powerful place of protest, a vibrant space for expression and a living, breathing work of art. What was once a symbol of hate has transformed into a true community space, one that educates visitors about this country’s enduring legacy of racial violence, and provides a glimmer of the world this movement hopes to build.11 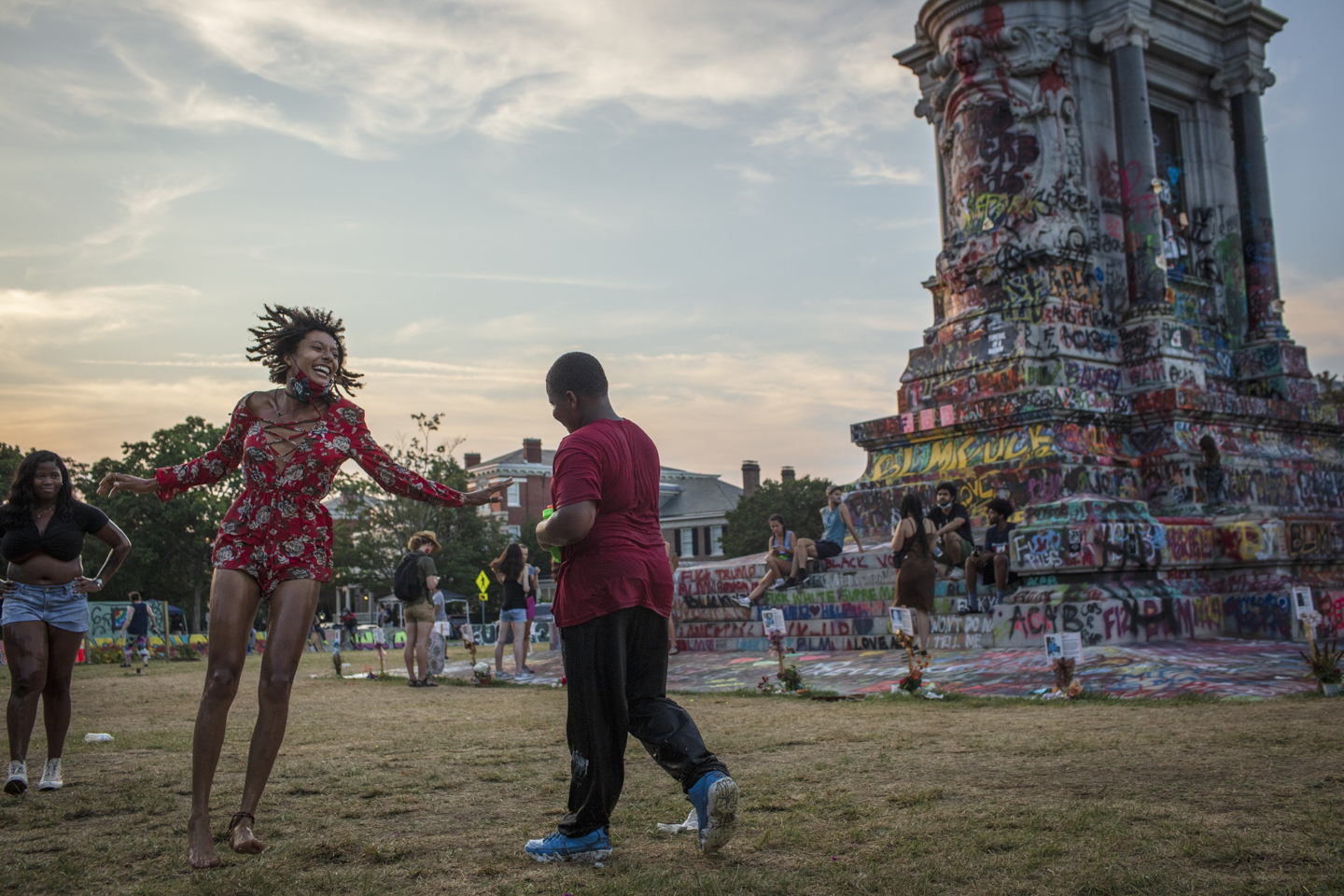 A water balloon fight on the Fourth of July at the newly renamed Marcus Davis Peters Circle. (Katie Orlinsky)