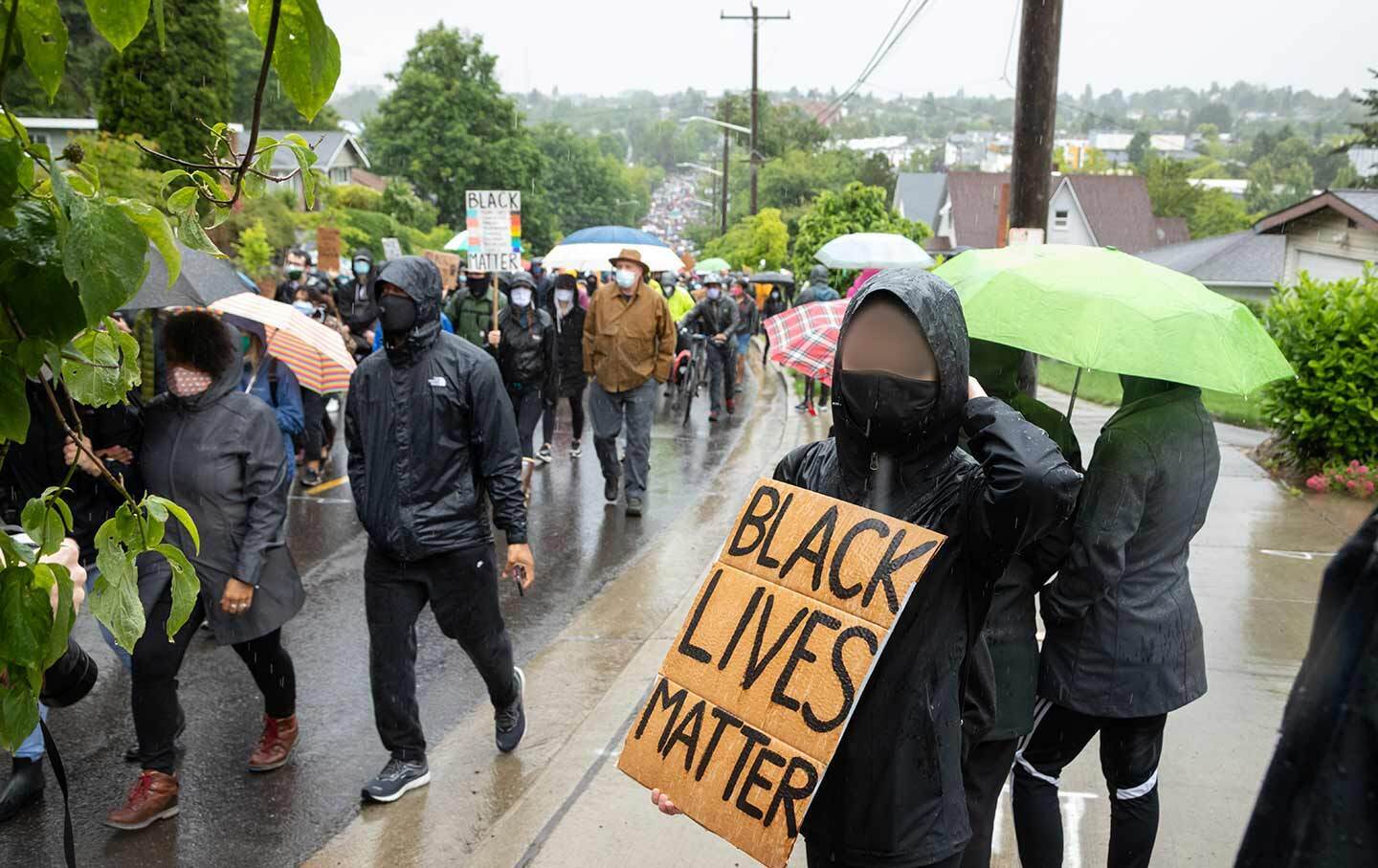 An Asian American protester marches in support of Black Lives Matter in Seattle, June 12, 2020. (The protester's face has been blurred to protect their identity.) (VDB Photos / Shutterstock)

Last month, in the middle of the Covid-19 pandemic, a group of Asian American/Pacific Islander (AAPI) nonprofits in Seattle asked the city to sweep large homeless encampments in the Chinatown–International District neighborhood.

“Our neighborhood’s density and vulnerability are not new, and so the city should have been very alert for any sign of an encampment forming and taken swift action to help the unhoused as well as our community,” wrote the organizations in a joint statement sent to the City. One week later, over 30 officers from the Seattle Police Department (SPD) showed up at the encampments. They forced unhoused residents to gather their belongings, then sent in a garbage truck to trash anything left behind.

It has been widely covered in recent weeks that Covid-19 has overwhelmingly harmed Black, Indigenous, and Latinx communities—the country’s most overworked, underpaid, under- and unemployed, overcrowded, underinsured, and under-resourced populations. These are the same people who are most likely to experience homelessness in Seattle, and encampment sweeps—in which their shelter and belongings are usually destroyed—only make their lives worse. The City had announced back in March that it would not remove encampments during the pandemic except under extreme circumstances. By early May, that policy seemed to no longer be in effect.

I am an active organizer around homeless issues in Seattle, and when I found out that AAPI groups had requested the sweep, I was surprised and disappointed. I thought a sweep this large should have been protested by the residents and businesses of the Chinatown–International District—not initiated by them. How is it that our AAPI community could be responsible for perpetuating this kind of harm?

I started dating my first real girlfriend when I was in the 10th grade. She was Korean American and a couple years older than me; she would bring me free sushi from the restaurant her parents owned and drive us around in her mom’s Lexus. We dated for 11 months—until she abruptly dumped me.

Her parents had found out that the person her daughter was dating wasn’t a full-blooded Korean American, like they had assumed. My legal name is Korean, so most people assume I’m full, especially before meeting me. But my father is Korean and Black.

“You can date anybody but Black,” my girlfriend’s mother had told her. “We cannot be around Black people.” 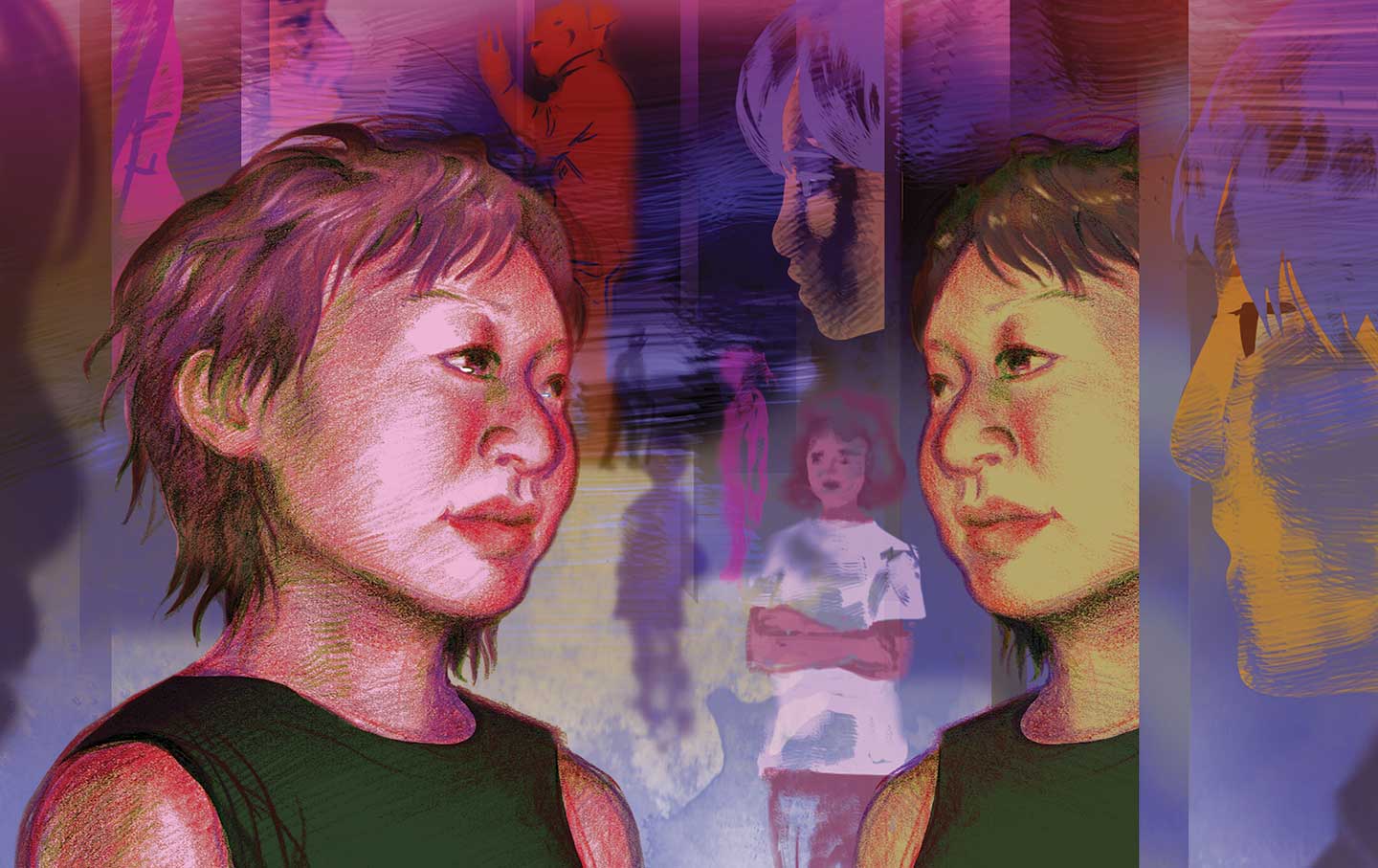 How Does One Tell the Story of Asian America?

At the time, I couldn’t comprehend that what I was experiencing was Asian anti-Blackness.

My father was born in South Korea right at the end of the Korean War, a Black Korean war baby. His father was a 19-year-old Black American soldier from Decatur, Ga., who went back to the United States when the war ended. His mother decided to follow through with her pregnancy against her parent’s wishes. My father used to tell me that growing up, he often dreamed of immigrating to the States—to escape Korean racism. He dreamed of chasing the American dream that waited for him on the other side of the Pacific.

When my father arrived in the United States, he was met with the same -isms he had faced in South Korea. Except now he was also an immigrant.

For AAPI immigrants like my father, the American dream starts with escape. Upon arriving, immigrants may not learn the true history of how American prosperity was built on the backs of slavery, colonization, and genocide. My father related to the stories of others who worked long hours to get themselves out of poverty, and believed in the mantra that if you work hard, you’ll succeed. There was no time to dig into a flawed system that prevented Black and Indigenous communities from escaping oppression. Asian Americans are taught not to make waves: The nail that sticks out gets pounded down. The trauma of growing up in under-resourced countries and surviving by a thread has motivated many people to never look back. To never think about oppression.

Seattle’s Chinatown–International District (CID) is the historic home of the Chinese, Japanese, and Filipino immigrants who first settled in the city. For more than a century, the people in this community—which now also includes Vietnamese refugees and immigrants—have worked tirelessly to rid themselves of stigma about their restaurants’ being unhygienic, or the idea that their streets were unsafe. This struggle became particularly acute during the onset of the pandemic. Restaurants in the CID neighborhood experienced the negative impacts of the virus quickly; by early March, some businesses reported that their business had already been cut in half. Anti-Asian racism was surging due to fearmongering in right-wing and mainstream media, along with Donald Trump’s insistence on calling the global pandemic the “Chinese virus” and “Kung flu.”

For neighborhood elders, the drastic decline in business revenue may have felt like a tragic loss of decades of emotional and physical toil, amplified by the weight of historic anti-Asian xenophobia and racism. The pandemic had closed virtually all local shops and businesses. Restaurants were only doing take-out.

In a May 19 letter addressed to the Seattle City Council, Deputy Mayor Mike Fong used “generational discrimination” against Chinese and Japanese residents to justify the decision to sweep encampments in the CID. He argued that anti-sweep legislation would do more harm to AAPI communities than good: “Perhaps nowhere is this more true than [in the] Chinatown–International District. Its restaurants and businesses were the first to feel the impacts of Covid-19, even before we knew we had any cases, because of the stigmatization and misinformation about the disease.”

Overcoming racism, for East Asian Americans, has long meant turning to assimilationism. We are taught that success will come to those who portray themselves as “model minorities”—for which the chief metric is proximity to and simulation of traditional white-Americanness. This can be achieved only by distinguishing, and distancing, oneself from other minorities: xenophobia and racism, enacted by victims of xenophobia and racism. 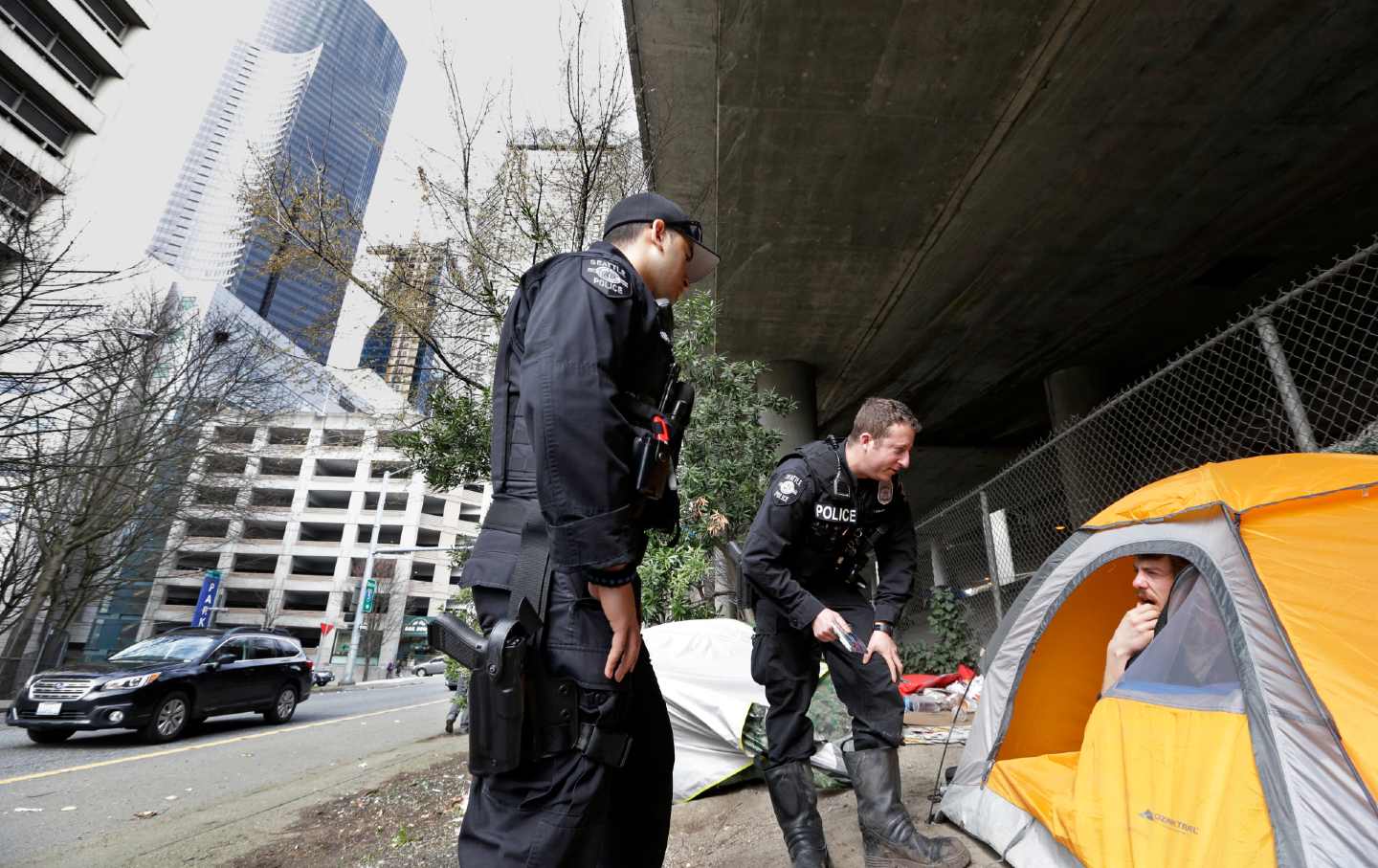 Similarly, the AAPI organizations that requested the encampment sweep are well aware of Seattle’s housing crisis, which is now one of the worst in the country. This past January, one count funded by Seattle and King County found that there were 11,199 people who identified as homeless, including 5,264 who were unsheltered, living in the county.

Organizers and activists have fought for years to end the City of Seattle’s cruel practice of sweeping away homeless individuals and their belongings. Unfortunately, white supremacy seems to have made some AAPI believe that the closer you get to whiteness and protecting whiteness, the further you are from suffering the same fate as other marginalized Americans.

Residents of the CID neighborhood want the same treatment as the city’s most well-resourced neighborhoods, such as the mostly white Ballard. This results in the replication of NIMBYism and anti-homeless behavior, but CID residents’ own material circumstances are also very different from Ballard residents’. They themselves are also vulnerable.

Because the City of Seattle has refused to help so many people find permanent shelter, the CID’s survival has been pitted against the homeless community’s survival. White supremacy, capitalism, and the model minority myth come together, forcing CID residents into a false choice: their humanity, over the humanity of their neighbors experiencing homelessness. Singularly focused on economic mobility, the AAPI organizations who requested encampment sweeps are losing sight of justice. 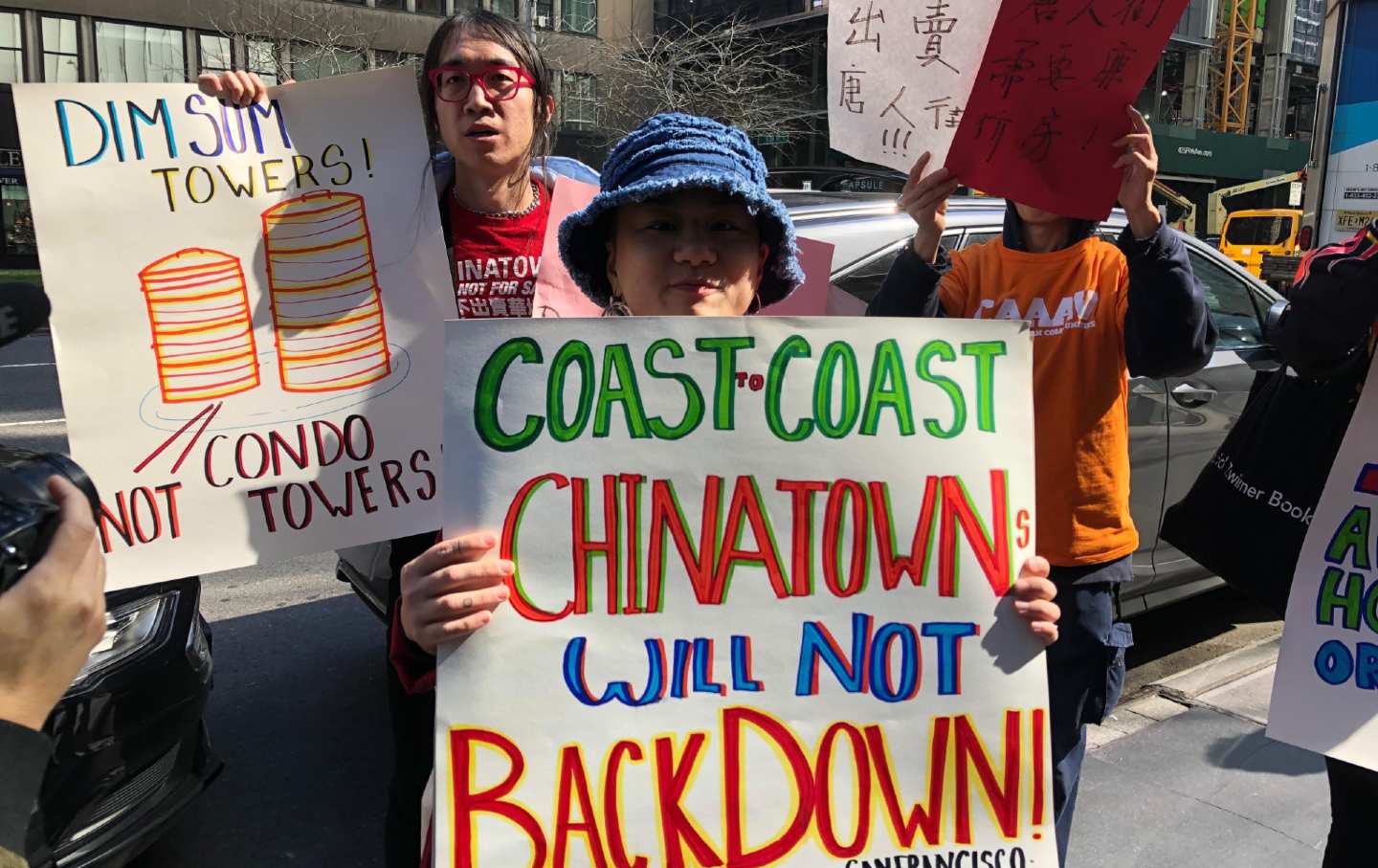 Chinatowns Must Radicalize to Survive

Earlier this month, I had struggles with my own parents, after I quit my full-time job in the middle of a pandemic. Seattle had the country’s attention: The SPD had decided to perform crowd control using tear gas and pepper spray, leading protesters to occupy an area around the department’s East Precinct house that would come to be called the Capitol Hill Organized Protest zone. I became consumed with organizing work and decided to dedicate my full energy toward this moment. People were actually talking about abolishing the police, without scoffing.

My parents weren’t happy about my decision. It’s not that they don’t care about Black lives—my father, after all, grew up not knowing how he’d survive the anti-Blackness of East Asia. It would also be arrogant to think I had to convince my mother that injustices were real; my mother’s social consciousness is without question. So what was preventing them from understanding that it was our turn to stand up for justice?

“We don’t want you out there,” said my mom. “You had such a good job—why do you want to throw it all away when nothing’s going to change?”

I don’t believe that nothing will change. I do believe that full liberation depends on the liberation of Black people. So many of the victories that AAPI people and so many others have been able to achieve were possible only because Black people resisted oppression, paving the way for everyone. They have paid the price for that resistance. It is our duty to be in solidarity until we are all free.