Jessy Rosales stood in front of the Supreme Court Building on Wednesday, holding a yellow circle printed with the words “I had an abortion” in one hand and a homemade poster that read “Me and all my homies heart abortion” in the other. Inside, the justices were considering whether to grant Mississippi’s request to uphold its ban on abortion after 15 weeks of pregnancy—and to end the right to legal abortion in the process.

Rosales had an abortion five years ago. As a low-income college student at the University of California–Riverside, she had no car, struggled to find a clinic, and faced a long wait for an appointment when she did find one. By the time she had her abortion, she was past 15 weeks. As she stood flanked by thousands of people at competing rallies on the pro- and anti-abortion sides, Rosales said she started sharing her story to break the isolation she felt.

“I remember, during that time, I didn’t know anybody else who had had an abortion,” she said. “It felt so wrong and weird.”

Rosales stood near the edge of the demonstration, wearing a headband that read, “Abortion positive.” A few feet behind her was an anti-abortion protester whose massive sign proclaimed, “God hates hands that shed innocent blood.” While most of the anti-abortion protesters stayed on their side of the metal barricade and stuck to calling for Roe to be overturned, this contingent had pressed right up against the back of the abortion rights rally. They appeared to be from an organization called Official Street Preachers, a designated hate group that also targets mosques. One of their signs read, “Ask me why you deserve hell.” Rosales positioned herself between them and the street, trying to block their signs with hers.

“I would love to be able to hear the speakers, but of course we have antis here with their megaphones and their really large posters,” Rosales said. “It’s really hard to be present in the moment, and it’s hard to not be affected by it.”

But closer to the center of the abortion rights rally was a feeling of frenetic energy driven by an impending sense that legal abortion might be lost. Even before the arguments began, abortion rights advocates understood that the case, Dobbs v. Jackson Women’s Health Organization, took direct aim at Roe v. Wade. Survivor and abortion rights advocate Alison Turkos stripped down to her T-shirt despite the cold and sank to her knees as she shouted into a megaphone, leading the crowd in chants of “Liberate abortion!” Slogans like that made it clear that many advocates have shifted from trying to convince the court to uphold abortion rights to rallying their base around a full-throated rejection of abortion shame and stigma. Encircling the podium were people from as far as California, Michigan, and across the South. They chanted, “This is what community looks like!” and “Hey hey, ho ho, abortion bans have got to go!,” at times struggling to be heard over the anti-abortion protesters at the back, who shouted that the women were “whores” and should close their legs.

The stakes were “a little bit overwhelming,” said Larada Lee, another abortion storyteller who spoke to The Nation earlier this year about her experience seeking an abortion in Ohio during the pandemic. Lee has since moved to California, where she is on the board of ACCESS Reproductive Justice, an abortion fund that is preparing for an even greater influx of “abortion tourists” from other states if the court allows states to further restrict or ban abortion. Already, she said, ACCESS has helped patients who were forced to travel to California from Texas because of that state’s ongoing six-week ban.

The Dobbs case is “definitely challenging me to think beyond Roe v. Wade and what I can do to be in this fight and support people in getting their abortions,” Lee said.

The reality is that the justices may overturn Roe. The Dobbs case threatens access to legal abortion through clinics in about half of the states. So a number of activists are trying to draw attention to alternatives. A few hours before the arguments began, organizers with the group Shout Your Abortion stood in front of a black-and-white banner that read, “We are taking abortion pills forever.”

“Abortion pills are in our hands, and we won’t stop!” they chanted, brandishing white boxes that contained mifepristone, the first medication used in the typical two-step method for inducing a medical abortion. Four of them took the mifepristone in unison, sipping from bottles of water, underscoring the growing sense among activists that access to abortion is not entirely within the court’s control.

Not far away was a line of anti-abortion protesters shouting, “Stop fornicating, you wicked, vile women!”

“Republicans might have the courts, but we are having abortions,” she said. “They will never, ever stop us. And they shouldn’t feel like they’ve won. Because they’ll never win.”

Bonow pointed to a contradiction between the court’s apparent willingness to allow states to ban legal abortion and the proliferation of groups like Aid Access—which legally supplied the pills she and other demonstrators took—that have the potential to make early abortion “more accessible than it’s ever been.” Bonow and fellow proponents of self-managed abortion are determined to defy the court and promote ways of helping each other end pregnancies safely. 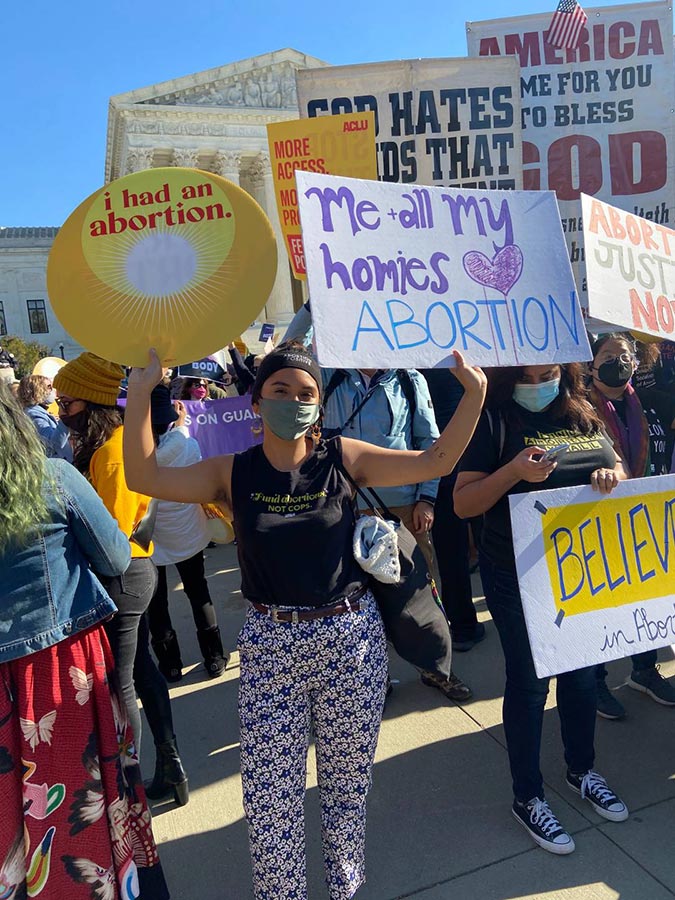 Jessy Rosales stands in front of the Supreme Court on December 2, 2021. (Amy Littlefield)

From the stage, Renee Bracey Sherman, the executive director of the reproductive justice group We Testify, shouted instructions for medication abortion into a megaphone, using popular shorthand for the two-drug regimen of mifepristone and misoprostol. “Let’s chant that,” Bracey Sherman said. “One mife, four miso! One mife, four miso!” The crowd repeated it after her. In the background, the voices of the Supreme Court justices boomed from a loudspeaker, as the anti-abortion protesters broadcast Mississippi’s side of the arguments.

Bracey Sherman is largely responsible for a shift in the tenor of these demonstrations. Her organization, We Testify, works with nearly 100 people who have had abortions and tell their stories from the stage and in the media. For many years, as anti-choice activists began chipping away at the protections guaranteed by Roe, protests at the Court like this one didn’t so prominently feature speakers who openly addressed their own abortions. That often meant the public understood abortion primarily as an abstract right, not as something real people in their lives needed and wanted. Thanks to pressure from Bracey Sherman and others in the movement, that has begun to change. By her count, at least 20 people who have had abortions took to the stage Wednesday—the highest number she had ever seen at such an event. Those storytellers included Representatives Barbara Lee, Cori Bush, and Pramila Jayapal. They also included Bracey Sherman’s mom, who stood on the stage with her daughter at the end of the rally.

“I kept my abortion a secret for six years,” Bracey Sherman said, adding that she was afraid her family would judge her. “But that’s not true… because my mama is here!”

Bracey Sherman’s name appears along with her mother’s on an amicus brief submitted to the court in defense of abortion rights, alongside more than 6,600 others from people who have had abortions.

Despite the defiant tone, the prospects for the abortion-rights movement are bleak. Legal experts like Florida State University law professor Mary Ziegler, who had thought the court might try to find a way to uphold Roe while allowing the 15-week ban in Mississippi to stand, changed their minds after hearing the arguments yesterday.

“I now believe that the justices will fully overturn Roe v. Wade when their decision comes down next year,” Ziegler wrote for The New York Times.

The Roe decision in 1973 marked a stunning defeat for people who opposed abortion, and it sparked a massive uprising. All across the country, people who had not engaged on the issue before were moved to action by the Supreme Court’s decision. After waging decades of incremental efforts to chip away at Roe, these efforts may have have succeeded. The anti-abortion movement will likely face its own cataclysm by June of next year. What was clear Wednesday is that a group of committed abortion rights supporters is ready to fight to “liberate abortion” beyond Roe. What’s not clear yet is whether and when the larger uprising will come.