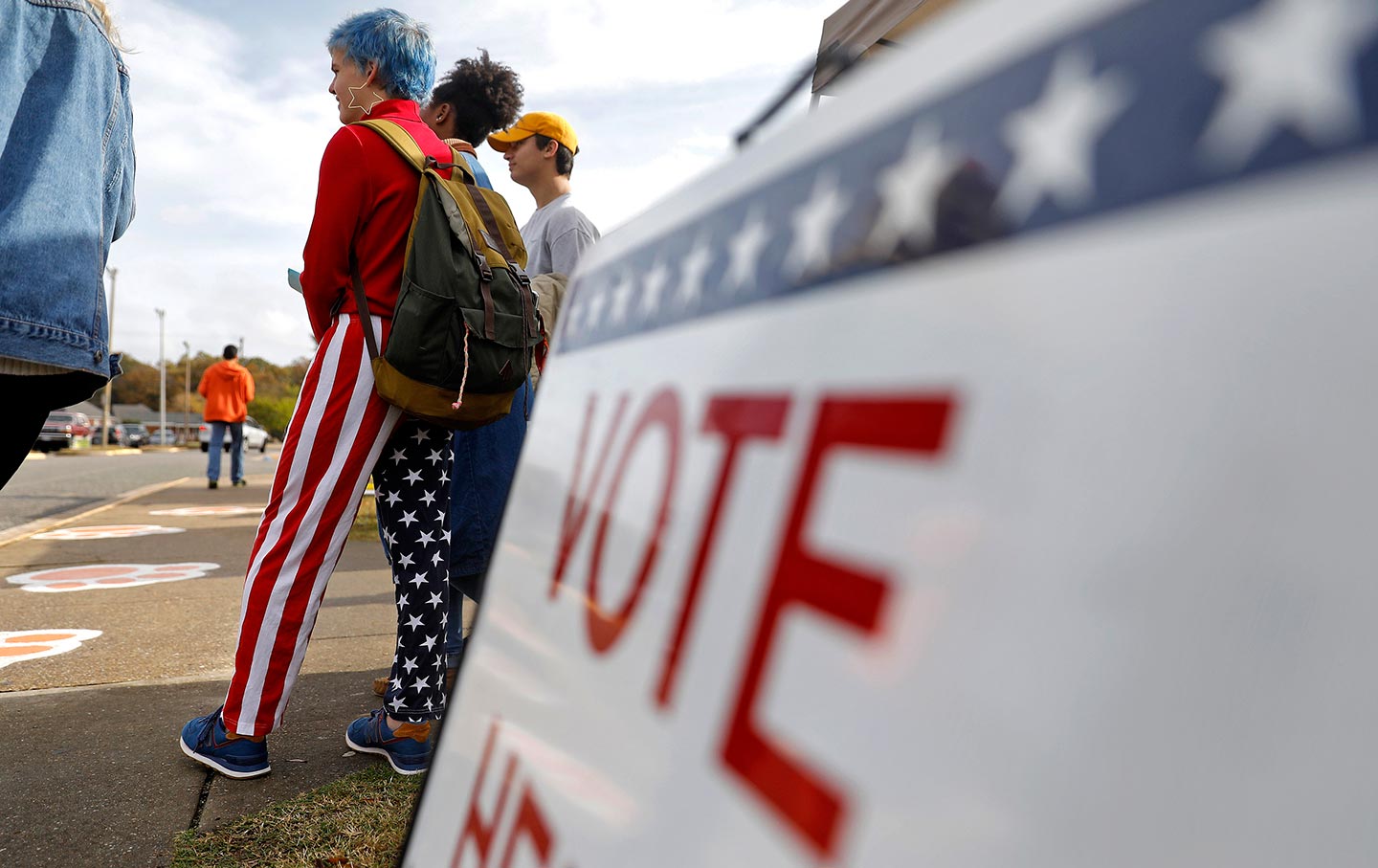 This story is published as part of StudentNation’s “Vision 2020 Election: Stories From the Next Generation,” reports from young journalists that center the concerns of diverse young voters. In this project, working with Dr. Sherri Williams, we recruited young journalists from different backgrounds to develop story ideas and reporting about their peers’ concerns ahead of the most important election of our lives. We’ll continue publishing two stories each week over the course of the next month.

Kiaira Jackson, a senior at Albany State University and the Georgia county’s newly elected, and youngest, NAACP president, was turned away at the polls in 2018.

Weeks before, she had organized voter registration drives on campus and throughout the community. But when she went to vote on November 6, Jackson, then a junior at one of the two ballot booths on Albany State University’s campus, was told that she wasn’t registered in Dougherty County. Though she had filled out registration forms on campus, the system said she was registered to vote in her hometown, 90 miles away.

“I didn’t understand how I was registered to vote in a county where I didn’t register to vote,” Jackson said. “How could the system at my precinct reflect information that I had never provided?”

Jackson looked to local resources for a solution. She was advised by her NAACP Youth & College Advisor to contact the Georgia NAACP State Office, where they cross-referenced voting records and eventually confirmed she was registered at Covenant Presbyterian Church in Albany.

But when she returned, she was denied a second time at the newly confirmed polling location. It took a call to the elections office and an election official appearing on Jackson’s behalf with supporting documents for her to finally cast her ballot.

According to Jackson, she soon learned that other students were also being turned away for similar reasons. “I felt disheartened that I put in so much work to turn my student body out to vote—and had gotten mass participation—only for many to not be able to,” Jackson said. More than two dozen students at the historically Black Albany State University were turned away at the polls for the 2018 midterm election, according to the NAACP. Shortly after, the NAACP demanded that Georgia election officials investigate those patterns of voter suppression.

Nationwide, 2018 was a significant year for young voters, yielding a record-breaking turnout. The youth vote jumped 16 percent compared to the 2016 midterm election, and for the first time since 1982, rates surpassed 50 percent, according to the Brookings Institution. Mobilized to lead the resistance against issues like abortion and climate change, young adults ages 18 to 29 emerged as a central voting bloc.

Advocates say a blitz attack on youth votes followed shortly after, and suppression tactics emerged across the country, particularly in swing states. The jarring effects are no surprise, considering the majority of young voters lean left: The last two Democratic presidential candidates won the youth vote by 23 and 18 percentage points, according to Tuft University’s Center for Information and Research on Civic Learning and Engagement.

According to Michael Holloman, communications director for Fair Fight Action, an organization founded by former Georgia gubernatorial candidate Stacey Abrams to inform young people of their vulnerability to voter suppression, these efforts to suppress young people’s votes are markedly partisan.

“A lot of Republicans in Georgia, and across the nation, know this country is changing demographically and politically. Across the country, you see active attempts to close polling locations on college campuses and restrictions on using student ID as a form of voter identification,” Holloman said. “Meeting voter ID requirements is a big issue for young people, especially for minorities.”

Jackson said students were turned away for a number of reasons, but mostly for having the wrong polling locations, issues with their registration, and misspellings of their names.

Voters with names with unconventional spellings, transgender and gender-nonconforming individuals with name changes, and first-generation immigrants who speak English as a second language encounter challenges while voting. Even minor discrepancies like spaces, apostrophes, hyphens, and misspellings risk young people’s right to vote.

Transgender or gender nonconforming voters who may have transitioned or appear differently from their identification photo may have challenges voting in states that have strict photo identification requirements. Young adults account for more than half of the LGBTQ population in the United States, according to UCLA’s Williams Institute.

Mariah Lee, a trans woman living in North Carolina, has a pending case that she believes could improve the voting experience for her community.

Last November, Lee, her mother, and her 18-year-old sister utilized curbside voting service at Cornelius Town Hall, as Lee has a learning disability and her mother suffers from multiple sclerosis and stomach cancer. It was Lee’s first time voting since formally changing her name on her ID, and she said she knew there was going to be a problem.

The volunteer who assisted them with paperwork took issue with Lee’s form, saying that her handwriting was not legible. Lee and her family members felt it was readable, but Lee agreed to rewrite it as the volunteer requested. After submitting a second form, Lee was taken to another chief judge of the polling location, who said that her face didn’t match her name.

“Is this about me being transgender?” Lee asked. The chief judge then demanded to see her ID. “It’s not a requirement that I show you my license to vote,” Lee said, which is true: According to the North Carolina State Board of Elections, voters are not required to show photo ID until further order of the courts. But the poll worker insisted.

Lee said she felt helpless. She handed the ID over anyway.

“Without my license she wouldn’t have allowed me to vote,” said Lee. “The thing I was afraid would happen happened.”

The back-and-forth went on for an hour, Lee said, with the chief judge raising her voice at Lee, which drew a crowd. She said the experience was humiliating, and that though she was eventually able to vote, the incident has provoked suicidal thoughts, for which she is seeking professional help.

Voter identification laws are another hurdle for young adults, who are more likely to move frequently for college and jobs.

In states where absentee voting is more accessible, it’s still a strenuous process: late arrivals, lost ballots, essential follow-up, rejections for minor mistakes, and the risk of missing deadlines are all challenges for young voters.

In states like Texas that put restrictions on absentee voting, young people are automatically counted out. The voter must be 65 years or older, disabled, abroad on both Election Day and during the early voting period, or jailed, according to the Texas Secretary of State Office.

When Katya Ehresman, an incoming senior at the University of Texas at Austin, learned that she could not vote by mail, she said she became concerned about her safety with the pandemic looming over the election.

According to Ehresman, Texas college campuses are notorious for having hours-long wait times. She didn’t feel comfortable waiting for so long during a pandemic. Not only that, if universities go online, many students will stay in their hometowns, where they might not be registered to vote.

“These restrictive voting laws are disenfranchising us students and a lot of the population,” she said. “We can’t even have access to safer alternatives to vote by mail, and it’s upsetting.”

Maya Patel, state coordinator for the Campus Vote Project, serves to help campuses institutionalize reforms that arm students with the information they need to register and vote. She believes that an overarching barrier for students is their unfamiliarity with the voting process. “In Texas, you can vote with a handgun license, but not with a student ID,” Patel said.

Voters without proper identification, according to VoteTexas, must present a passport or sign a Reasonable Impediment Declaration form, which must be done in-person. “I’ve even heard of students getting turned away for the address on their Texas ID not matching the address that they’re registered at,” Patel said. “That’s not a real requirement, but students just don’t know the laws well enough to argue with the poll worker.”

Outside forces are filling the civic education gap and meeting young people where they are: online. Twitter deleted over 10,000 anti-voting accounts just days before the 2016 election, according to the Brennan Center for Justice. It also cited that in an effort to reduce voter suppression messages, Facebook expanded its policies to include actions against misuse during elections.

LaTosha Brown, cofounder of Black Voters Matter, focuses on uplifting Black voters, and she believes that young people are a major target on social media.

“The greatest danger to younger voters is misinformation,” Brown said. “In 2016, the Russian bots trolling on social media were directed at young voters, but there was a particular message for young Black people…. What we saw then was the dismantling of democracy, which ultimately impacts who has access to voting, and now we see how it’s playing out with the coronavirus.”

Limited voter registration is disproportionately affecting young people, and many states are struggling with new voter registration. In March, registered voters in Kentucky increased by only 0.01 percent. In April, Virginia had nearly a 75 percent decrease in new registrants compared to April 2012. But also, because of public safety concerns during coronavirus, Kentucky closed polling locations across the state. In one county—with the highest population of Black residents—the number was reduced to one in-person location. As a result, people were turned away at the polls, resulting in a viral video.

Daud Mumin, 18, serves as a Utah delegate of the student engagement platform Eighteen x 18 established by actress Yara Shahidi. He believes young voters will be affected by the coronavirus because many don’t have access to basic needs.

“We can’t go back to normal, because normal didn’t serve us,” Mumin said. “Displaced students and other high-risk marginalized groups are worried about their health, food insecurity, and unemployment.”

Mumin said Arizona used Covid-19 as an excuse to close polling locations in low-income areas, but kept them open in the suburbs.

Two-thirds of Americans believe the coronavirus outbreak will greatly impact people’s ability to vote in the presidential election, according to a national survey conducted by the Pew Research Center. The study suggests 75 percent of Republicans are confident that the November election will be conducted fairly. Less than half of Democrats agree.

With the coronavirus, a recession, and a potential second term for Donald Trump, protecting the youth vote is critical in 2020, Mumin said.

“Covid-19 does discriminate,” Mumin said. It affects people differently across racial and economic lines. “This pandemic is showing us just how fragile our systems are.”