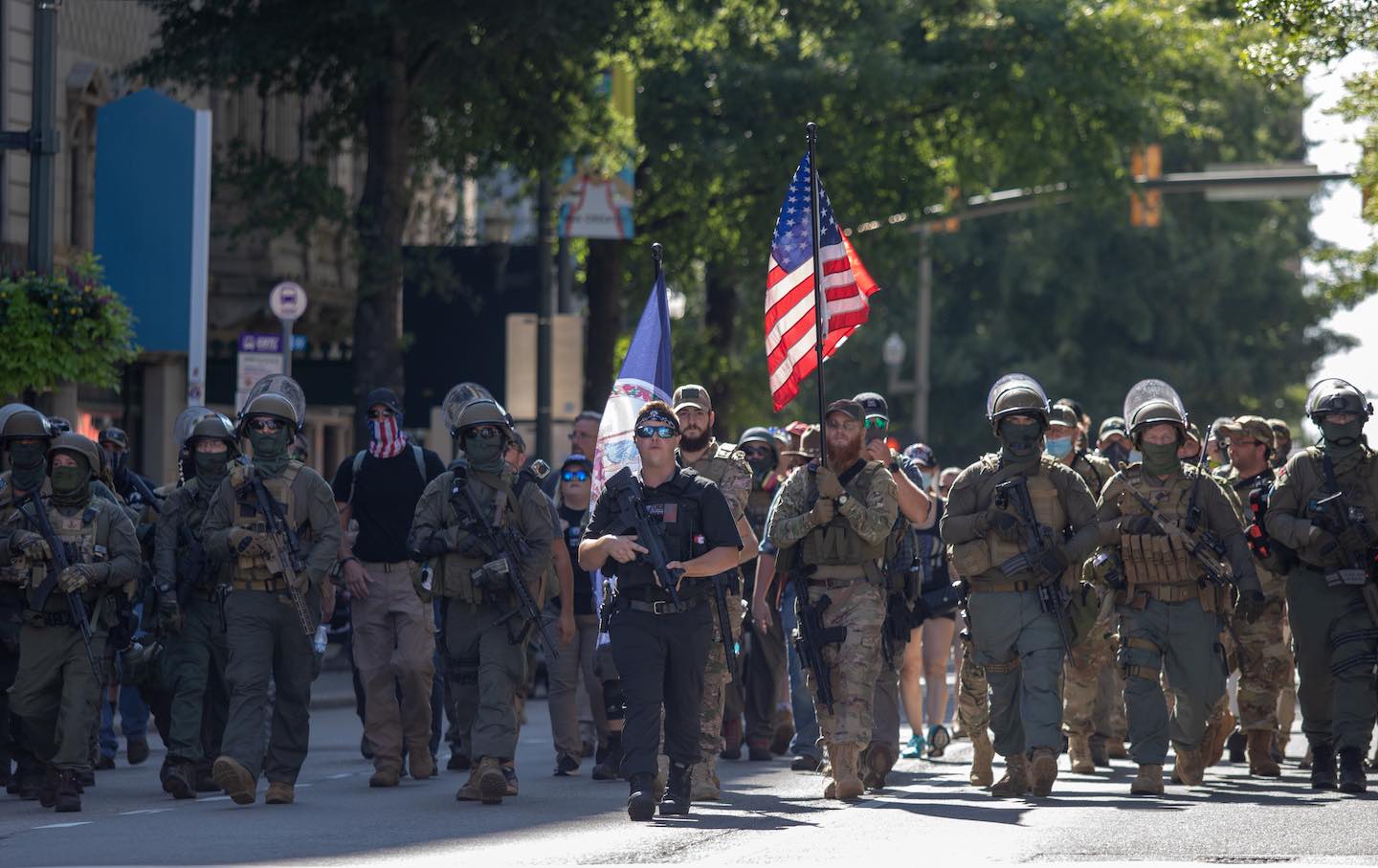 Asked at yesterday’s presidential debate if he would condemn white supremacist violence by groups like the Proud Boys, President Trump was defiant, remarking: “Almost everything I see is from the left-wing, not the right-wing.” But that very same day, the FBI issued an intelligence report warning of an imminent “violent extremist threat” posed by a far-right militia that includes white supremacists—identifying the current election period up to the 2021 inauguration as a “potential flashpoint.”

The report, obtained exclusively by The Nation and titled “Boogaloo Adherents Likely Increasing Anti-Government Violent Rhetoric and Activities, Increasing Domestic Violent Extremist Threat in the FBI Dallas Area of Responsibility,” warns of the threat posed by the far-right militia group known as the “Boogaloos.” Marked for official use only and law enforcement sensitive, the document was prepared by the FBI’s Dallas Field Office and is dated September 29, 2020. It draws on a wide array of intelligence sources, making specific mention of human sources—suggesting that the Bureau may have confidential informants within the group. The document points to several catalysts for the rise in the group’s membership, including resentment over perceived government overreach embodied by the Covid-19 shutdown and the presidential election.

FBI Dallas Field Office judges in the next three months, continuing up to the January 2021 inauguration with the presidential elections acting as a potential flashpoint, boogaloo adherents likely will expand influence within the FBI Dallas AOR [Area of Responsibility] due to the presence of existing anti-government or anti-authority violent extremists, the sentiment of perceived government overreach, heightened tensions due to COVID-19-related state and local restrictions, and violence or criminal activity at lawful protests as a result of the death of an African American USPER [US person] in Minneapolis, factors that led to violence at otherwise peaceful and lawful protests in the FBI Dallas AOR.

The word “Boogaloo” refers to a second American Civil War, which the loosely organized, fiercely anti-government group has declared its intention to bring about. Its members often wear an outfit of military fatigues and a Hawaiian shirt. While the Boogaloos clearly contain white supremacist elements—many members believe the coming civil war will be a race war—their main focus is strident opposition to government. 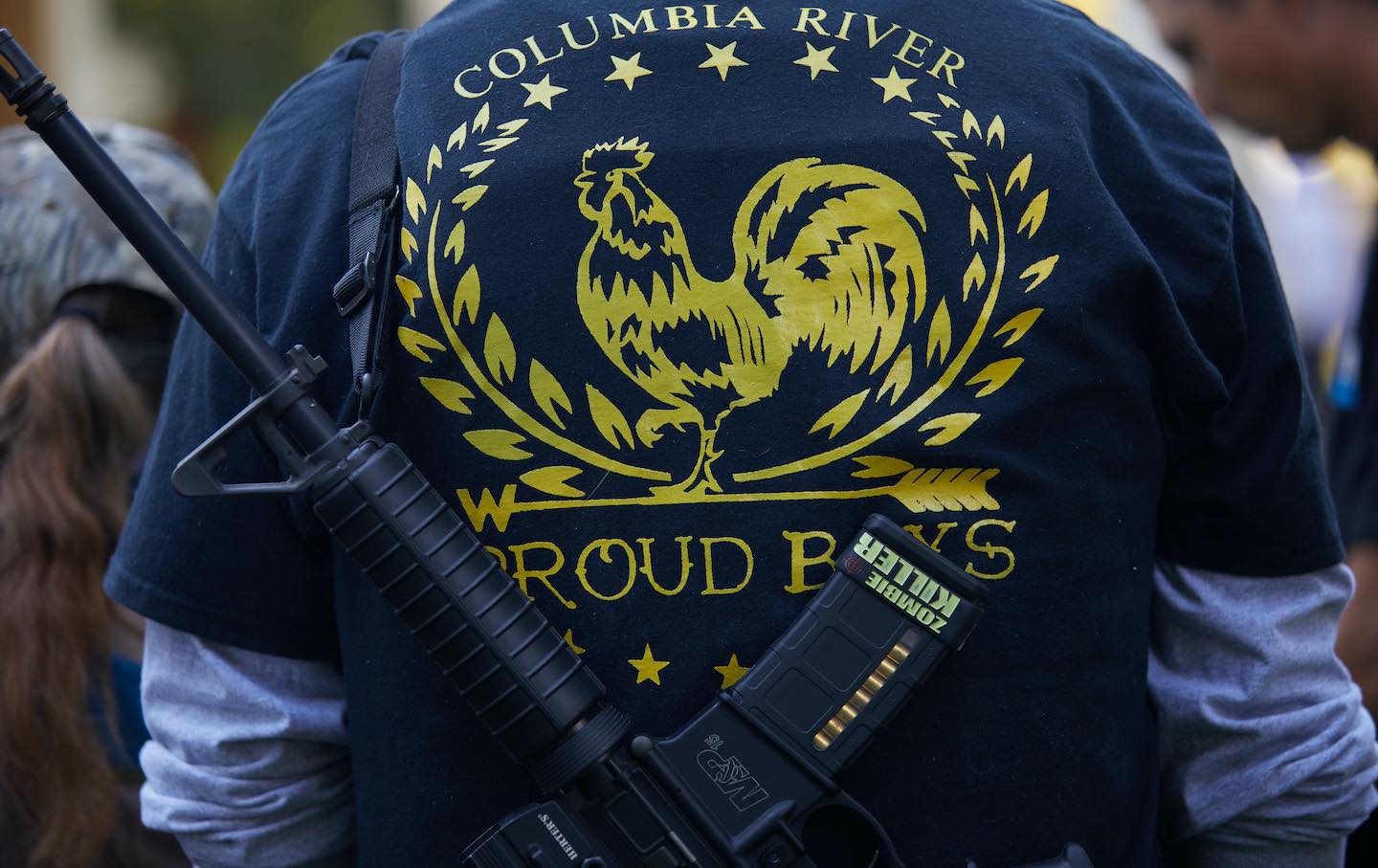 While skepticism of government is undoubtedly a common sentiment, the Boogaloos have distinguished themselves by carrying out significant acts of violence in furtherance of this belief. For example, this summer, one Boogaloo, Steven Carrillo, is alleged to have killed two law enforcement officers in Northern California. True to the group’s desire to hasten the next civil war, Carrilllo is alleged to have killed the law enforcement officers at an otherwise peaceful demonstration with a silenced machine gun, in hopes of provoking retaliation from the police against the demonstrators. Later in September, two other Boogaloo members were arrested and charged with providing material support to Hamas. The two men are alleged to have told an FBI informant posing as a Hamas member that they shared a common ideology in opposing the US government, and offered to act as mercenaries.

Two human sources are identified as being central to the judgments in the intelligence assessment. One of the sources has reported various threats since 2017, and some of the information reported has since been corroborated. The report mentions one source, claiming to have “direct access” to the Boogaloos, quoting a heavily armed member’s intentions to “hunt” anti-fascist anarchists and shoot any looters. The language echoes that of President Trump, who, following this summer’s civil unrest, tweeted, “When the looting starts, the shooting starts.” As The Nation reported in June, the same day that Trump announced his intention to designate “Antifa” a terrorist group, the FBI’s Washington Field Office was unable to find any evidence of antifa involvement in the violence. However, in July, The Nation reported that the US intelligence community was tracking a “potential threat to law enforcement” from the Boogaloos. While antifa groups have engaged in acts of property destruction and sometimes violence, a recent study published by the Center for Strategic and International Studies found that anti-fascist groups have not been involved in a single murder in the United States in the past 25 years.

The intelligence report concludes by citing concerns of the Boogaloos’ “increased ‘patrolling’ or attendance at events” amenable to their cause. You might say those orders are coming from the top—at the presidential debate last night, President Trump called for his supporters to patrol polling places. “I’m urging my supporters to go into the polls and watch very carefully because that’s what has to happen,” Trump said.