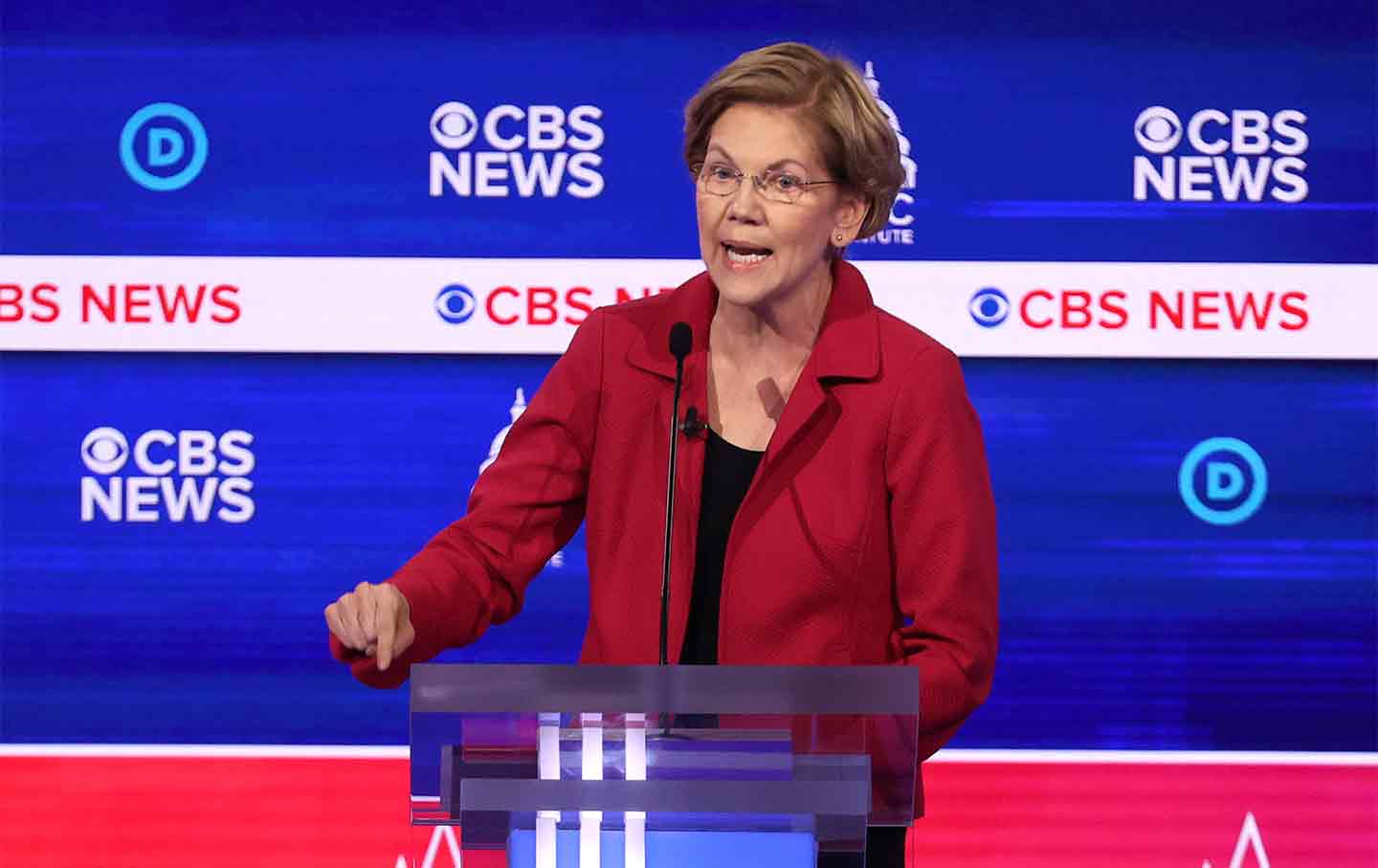 Elizabeth Warren enlivened and enlightened the 10th Democratic presidential debate with a soliloquy on supporting public education that reminded everyone who was paying attention that she is not just ready to govern, she is excited by the prospect.

For Warren, it was an electric moment at a point when her campaign needs juice. She’s trailing in the polls and too frequently neglected by the media—except when she is shredding billionaire contender Mike Bloomberg. Even her own supporters worry that the senator from Massachusetts is hitting her mark at too late a point in the race. Yet Warren’s ability to grab hold of issues and to infuse them with insight and passion is such that she cannot be written off.

That ability was on full display Tuesday night during the all-too-brief moment when education was on the agenda. As the last debate before the South Carolina primary and the 14 contests on Super Tuesday turned to the oft-neglected issue, Warren took charge. Other candidates responded—Vermont Senator Bernie Sanders with a progressive populist call for raising teacher pay; Bloomberg with an overtly-defensive attempt to distance himself from a record that infuriated education activists. But it was Warren who answered the question as a Democratic presidential nominee must.

Spontaneous applause erupted from a Charleston crowd that was thick with political insiders and donors—and that, observers noted, could be heard booing Sanders and Warren during exchanges with Bloomberg.

This was not the typical “I’m in it for the kids” pronouncement of the sort made by typically vague—and often compromised—politicians. Warren proposed a plan. Explaining that “we build a future by investing in our children,” she said, “I’ve got a plan to put 800 billion new federal dollars into our public schools.”

The moderator tried to cut her off, maintaining Tuesday night’s pattern of interruption whenever the debate got interesting.

“Education is not free,” she declared. “We must invest in the future of our children.”

Warren’s public education, public schools, public dollars argument got to the heart of the matter. She was not merely positioning in comparison with the other contenders for her party’s nomination, she was framing the debate that needs to be had, in this primary season and in the crucial competition that will come this fall. American Federation of Teachers union president Randi Weingarten tweeted thanks to Warren for her message, and rightly so.

Warren was mingling smart policy with smart politics on an issue that resonates with tens of millions of Americans.

After the Trump administration debacle that is Secretary of Education Betsy DeVos—a non-teacher who for decades has attacked public education—and after years of assaults on public-school teachers and their union by Republican governors such as Scott Walker in Wisconsin, Warren was actually spelling out the promise of “big structural change.”

Warren did so as a former elementary school teacher—who spoke powerfully in a critical Tuesday night exchange with Bloomberg about how she was forced out of the job she loved because of discrimination based on pregnancy. She also did so as a candidate who knows that teachers and education-focused parents are particularly reliable voters. And, make no mistake, Warren needs those votes.

After finishing a credible third in the Iowa caucuses, she had a dismal fourth-place finish in the New Hampshire primary and—despite a strong performance in last week’s debate—another fourth-place finish in Saturday’s Nevada’s caucuses. She has to do better than expected in South Carolina on Saturday, and then she needs clear wins in next Tuesday’s battle for the 1,344 “Super Tuesday” delegates.

Did Warren do enough Tuesday in Charleston? By measures of debating skills and the message she delivered, yes.

The question is whether enough voters heard her message, on education or anything else—outside of the pointed exchanges where she again eviscerated Bloomberg. Clips of clashes involving the billionaire got a lot more attention than those of the education exchange following the conclusion of an erratic and often unfocused debate that Democracy for America chair Charles Chamberlain characterized as “a moderator-driven train-wreck.” Chamberlain predicted that the debate “won’t do much to change the current trajectory” of a contest where Sanders is emerging as a front-runner, Bloomberg is spending even more freely, and former vice president Joe Biden may get a boost if he wins South Carolina.

If Warren hopes to change that trajectory, she needs to make a connection with people who are passionate about public education. 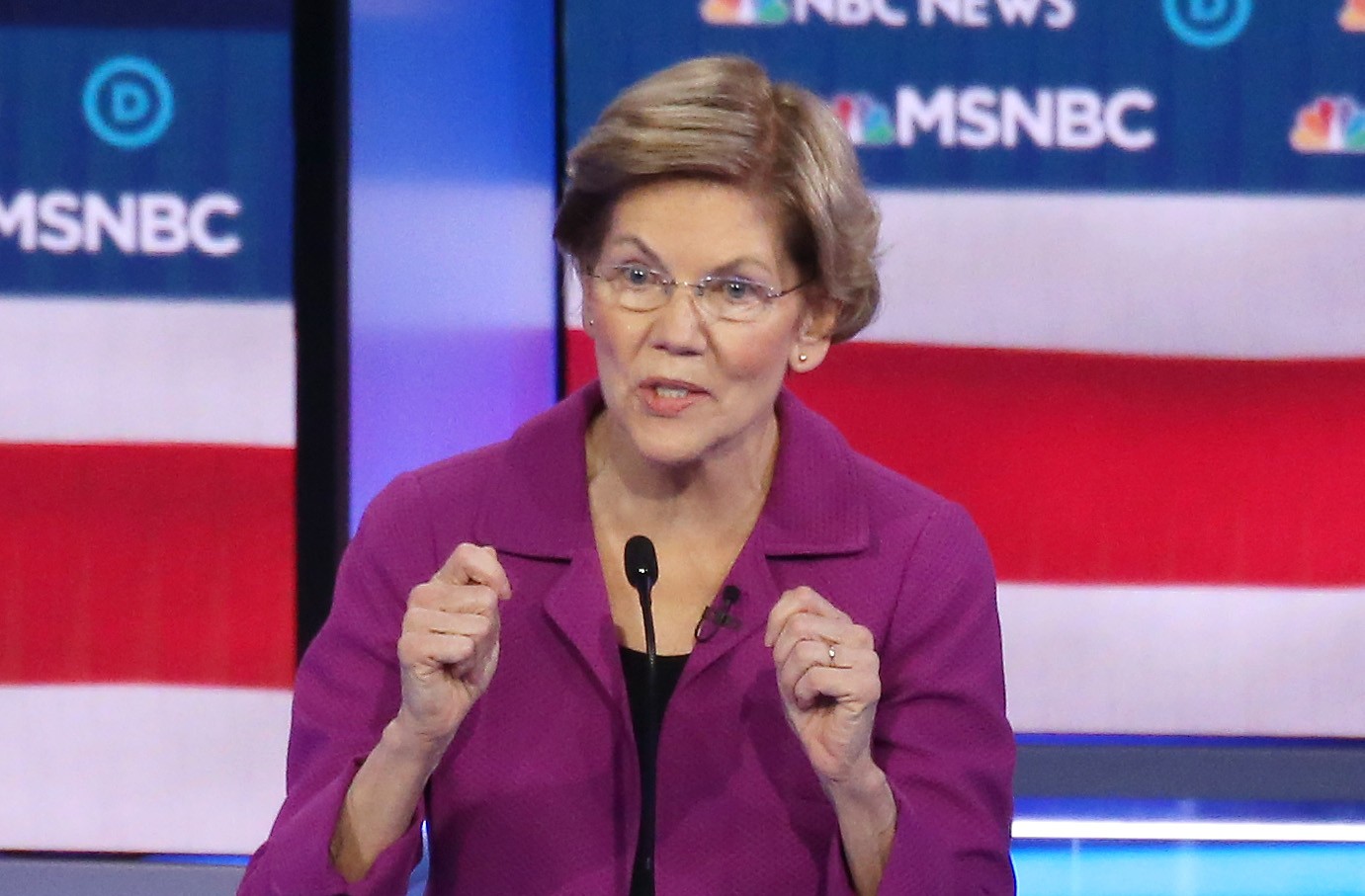 Last week, Warren won a joint endorsement from the 1.7 million-member American Federation of Teachers, along with Sanders and Biden. But that was more a show of opposition to Bloomberg than support for any one of the three favored contenders.

“The resolution signals to members and leaders that support for any of those three candidates is welcome at this stage of the process before the union makes a national endorsement,” explained AFT president Weingarten. “It was clear that the time to take this action was now, before all the delegates are chosen and before all of the primaries are over, so that AFT members and leaders can help shape the race and the narrative, ensure our voices are heard, and ensure one of these three candidates emerges as the nominee.”

State affiliates and local unions have begun to make their moves. The 35,000-member United Teachers Los Angeles, which is aligned with both the AFT and the National Education Association, has provided enthusiastic support for Sanders. So, too, have locals in the California cities of Oakland and Richmond. California will vote on March 3, Super Tuesday, as will Massachusetts, where the state chapter of the AFT and the Boston Teachers Union are backing Warren.

But there are a lot of teachers and parents and students who can cast ballots in the other Super Tuesday states, and Warren was speaking to them in Tuesday’s debate. Her message was passionate. She extended the dialogue to include a discussion of the cost of higher education. “One way we can support our teachers is to cancel student loan debt,” she said. “People across this country are being crushed by student loan debt. This is an issue we need to talk about.”

The more she talks about it, the more she is heard, the better for Warren. The challenge now has to do with the clock. As the nomination race speeds up, she has to find the time and the resources to maintain the education conversation that is so vital to her candidacy—and to the prospects of a Democratic Party that in November must propose to replace not just Donald Trump but also Betsy DeVos.