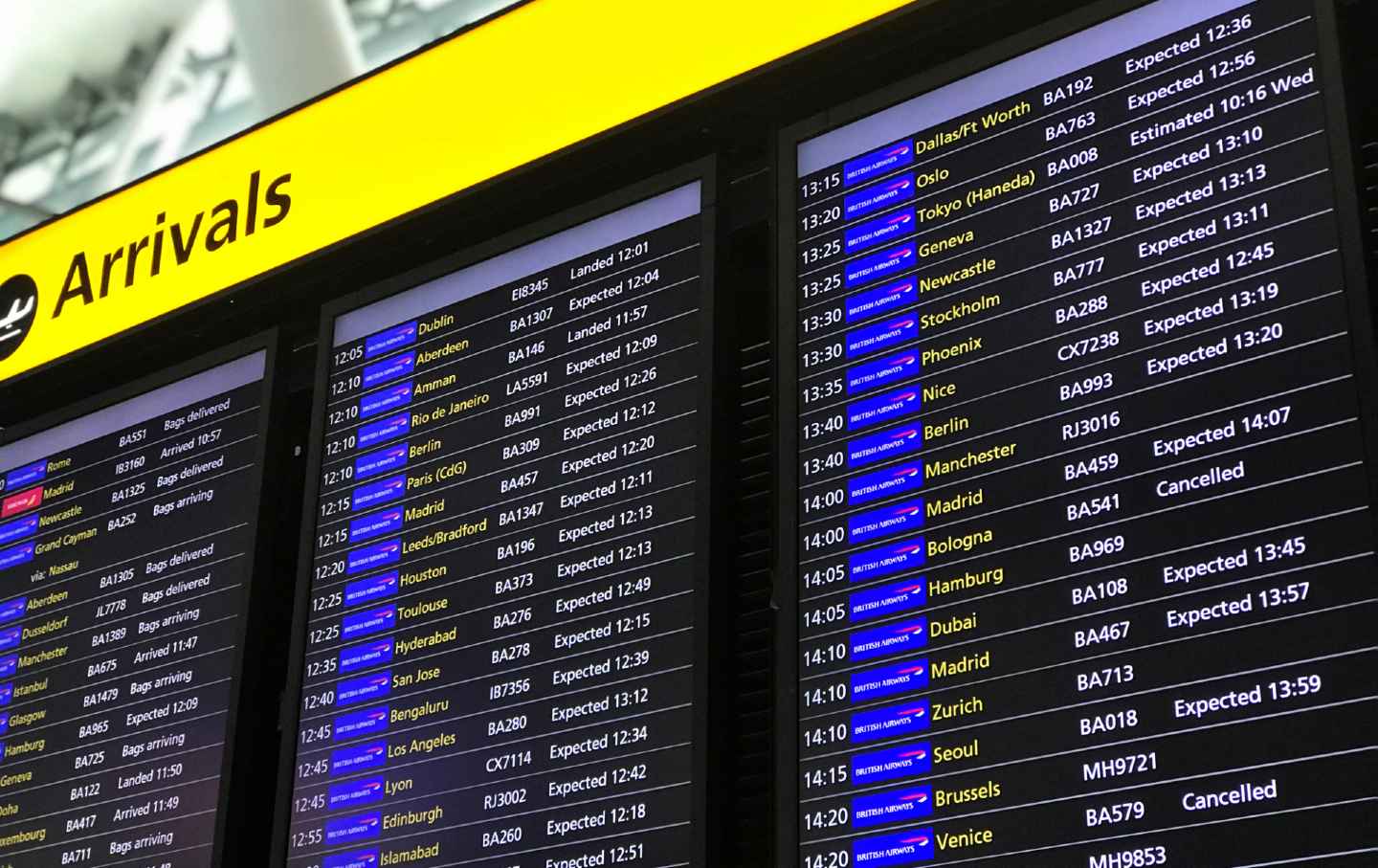 A passenger board at Heathrow Airport. (Steve Parsons / PA Wire)

For Donald Trump, even a global pandemic is just a fresh opportunity for self-dealing.

When the president announced his 30-day travel ban from continental Europe on Wednesday, one element inspired immediate bewilderment: the ban’s exemption of the United Kingdom, along with Ireland and a handful of other countries. Why should an edict supposedly designed to keep a “foreign virus” in Europe allow open travel from a large country currently in the throes of coronavirus escalation?

It’s easy enough to see this as some sort of political payoff to Boris Johnson for Brexit. But the administration’ real motivation is much simpler and classically Trumpian: to protect the corporate interests of US air carriers.

As it happens just one European airport—London’s Heathrow—is the major anchor for American, Delta, and United, the big three of the US air industry. Out of 80 million passengers through Heathrow every year, 10 million are US-bound. The numbers are staggering: In 2018, for instance, 3 million passengers traveled just between Heathrow and New York’s JFK, and over 1 million each between Heathrow and LAX, Chicago, Newark, San Francisco, and Miami. Heathrow is also the single biggest connection point for onward European travel.

Gregg Gonsalves and The Nation

By forcing nearly all US-Europe travelers through the UK, Trump is effectively bailing out American carriers’ most profitable transatlantic routes. (The exemption is also—no coincidence—protecting his own business interests. Trump golf courses in Scotland and Ireland, already struggling financially, stand to be slammed by the European travel downturn.)

As always with Trump, a quid pro quo is hiding in plain sight. American Airlines alone was one of the top 10 sources of Trump contributions in 2016, according to OpenSecrets.org—and 74 percent of the airline’s congressional contributions that year went to Republican House and Senate candidates. In this year’s cycle, nearly two-thirds of $1.6 million in airline industry federal election contributions recorded thus far are going to Republicans.

While Trump repays his airline-industry backers, as an investment in public health the Trump travel ban is bogus currency. The ban will have at best negligible impact: Local European restrictions in virus-afflicted regions combined with the collapsing tourist and business market have already halted most travel. Both within the continent and internationally, airlines have been flying empty planes just to hold their coveted and expensive slots at major airports—an absurd situation only eased this week when the EU agreed to suspend its normal tight regulations for retaining landing rights.

If anything, Trump’s ban adds new risks. The World Health Organization—whose authority Trump evoked in his speech—is unambiguous in its assessment that travel bans during this pandemic are mainly a very bad idea. “Evidence shows that restricting the movement of people and goods during public health emergencies is ineffective in most situations and may divert resources from other interventions,” the WHO declared in an exceptionally blunt assessment on February 29. “Furthermore, restrictions may interrupt needed aid and technical support, may disrupt businesses, and may have negative social and economic effects on the affected countries.”

As always always with this president, behind an otherwise nonsensical policy there lies a layer of toxic ideological motivation. Two simplistic ideas have animated Trump throughout his presidency: bigoted nationalism and popular tax cuts. On Wednesday he refracted coronavirus policy through the same cracked bifocal: bio-nationalism in a time of borderless pandemic, and tax cuts in a crisis that demands public investment. All of our COVID-19 emergency measures—closures, cancellations, social distancing—should have the same goals: social solidarity to slow the inevitable disease wave, protecting the most vulnerable, and preventing the medical system from collapsing like New Orleans’ levees in Hurricane Katrina. In the face of this impending coronavirus deluge, the president responded with the I’ve-got-mine politics of tax cuts and borders. It’s all he knows, and it’s costing American lives.