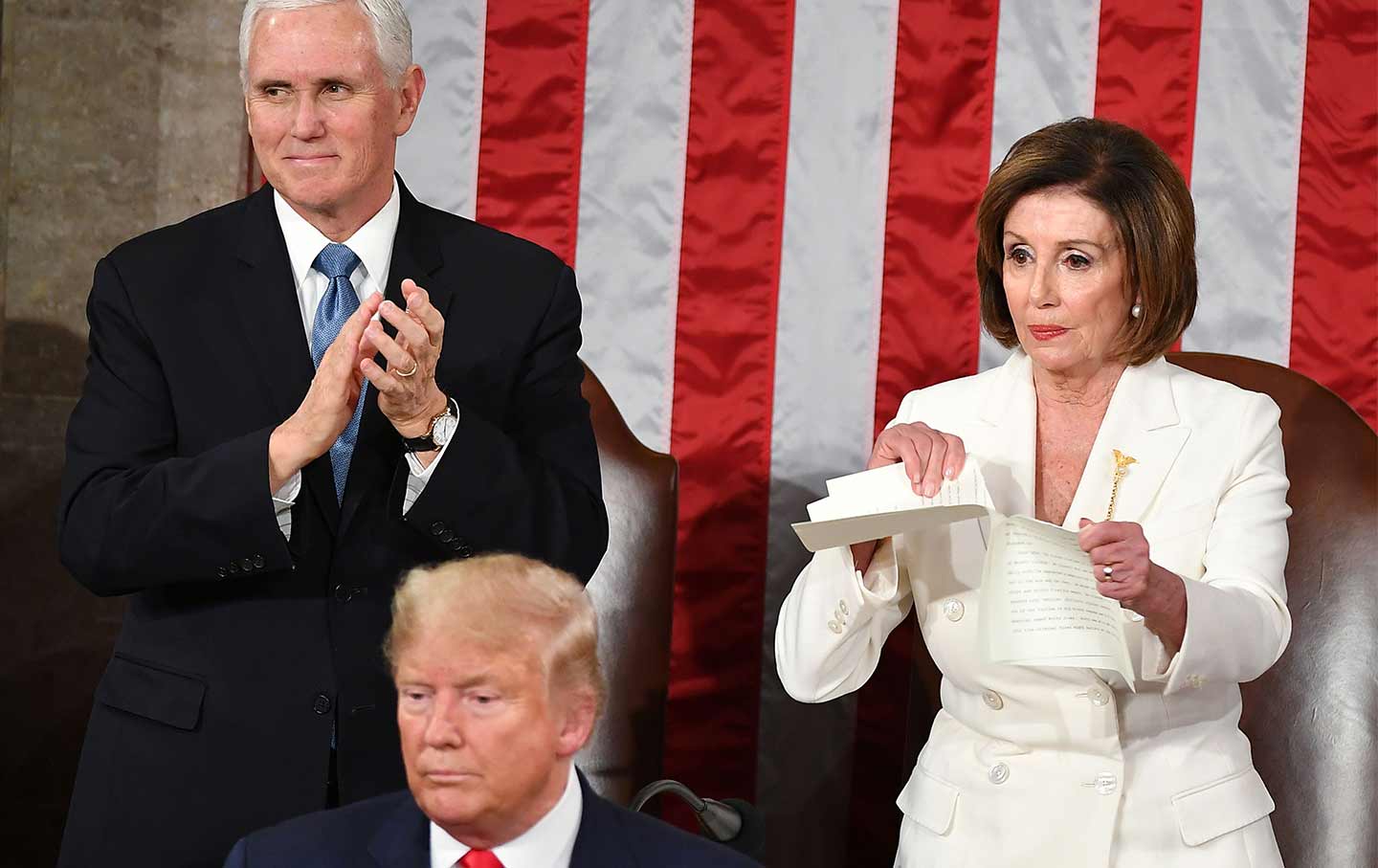 Speaker of the House Nancy Pelosi rips up a copy of President Trump’s speech after he delivered the State of the Union on February 4, 2020. (Mandel Ngan / AFP via Getty Images)

Before declaring President Trump’s State of the Union speech a “manifesto of mistruths” last week, Speaker of the House Nancy Pelosi demonstrated her disgust on national television by ripping the speech in half. “He shredded the truth, so I shredded his speech,” Pelosi later said. Though Trump and company have expressed outrage over her protest, they presented a budget proposal on Monday that essentially admitted the speaker was right. Since budgets don’t lie, we should pay attention to what the numbers actually say.

In his speech, Trump declared, “From the instant I took office, I moved rapidly to revive the US economy.… If we had not reversed the failed economic policies of the previous administration, the world would not now be witness to America’s great economic success.” But Trump’s budget numbers acknowledge that America’s economy has not come anywhere close to the 4 percent annual growth he predicted when he pushed an extreme $2 trillion package of tax cuts through Congress in 2017.

On Trump’s watch, the federal debt is up $3 trillion. To put it another way, the Trump administration has taken out a $3 trillion loan to achieve in its first three years roughly the same economic and job growth that the Obama administration saw in its last three years. If that kind of return is “success” for Trump, it’s no wonder American banks no longer lend to him.

Since budgets don’t lie, the folks crunching the numbers at the White House had to acknowledge there is no plan to get America out of the red anytime soon. They hang their economic hopes on long-term growth projections that make the failed projections of Trump’s first three years seem modest. But they also make clear that Trump wants poor and low-income Americans to pick up the bill for his shortcomings in the meantime. 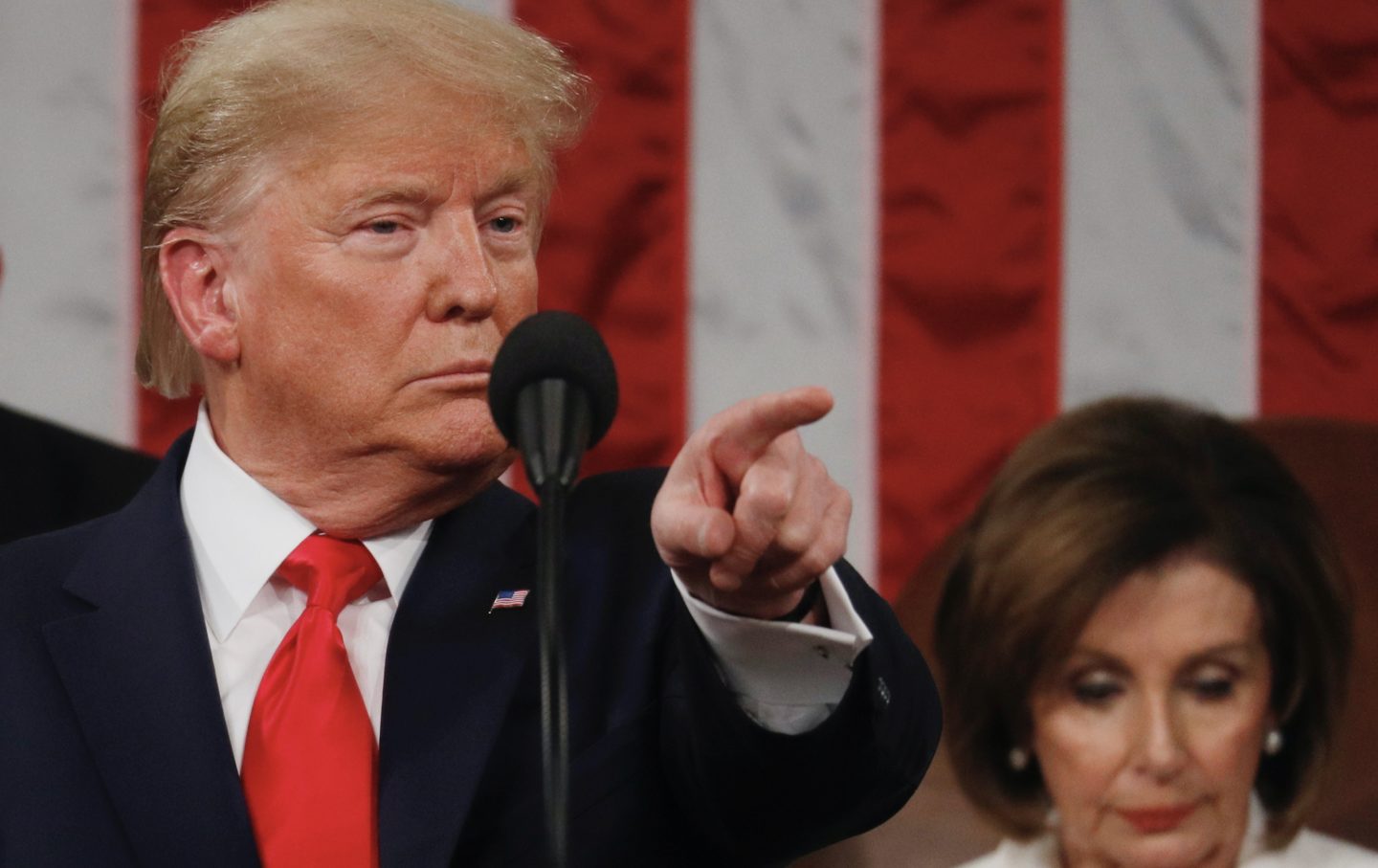 While Trump touts unemployment rates, which have been trending down since the economic recovery of Obama’s first term, his budget does not address the soaring costs of housing, education, and health care that have created an economic crisis for most Americans. The Poor People’s Campaign, a national movement led by poor people and their allies, has published a moral budget that demonstrates that 140 million Americans—42 percent of the nation—are no more than one $400 emergency away from not being able to pay their bills the next month. Poverty is a moral crisis in America, but the Trump administration has changed the qualifying criteria for government assistance in order to celebrate that lower numbers of people now receive food stamps, as if ceasing to count poor people somehow reduces poverty.

In the same vein, Trump’s new budget proposes $181 billion in cuts to food stamps over the next decade, in addition to slashing $800 billion from Medicaid. If he had his way, Housing and Urban Development (HUD) would see a total decrease of 15 percent, Health and Human Services 9 percent, and the Department of Education 8 percent. In the House of Representatives, where Pelosi shredded Trump’s speech last week, such a proposal is dead on arrival. But in an election year, Trump’s message is clear: No matter whose stories he told at the State of the Union, he is not running to represent poor and low-income Americans. He is dedicated to propping up an economy where the rich get richer and the poor get medical debt.

Rather than address the real needs of America’s poor and working people, Trump’s budget proposes $2 billion for the border wall he has used to try to convince poor people he is fighting for them by waging a war on immigrants. But by the numbers, this is also a lie. The Congressional Budget Office has weighed the cost of comprehensive immigration reform against the increased revenue in income and payroll taxes if currently undocumented people were working above the table. It found a net gain of $20 billion a year—more than enough to pay for the proposed cuts to food stamps in Trump’s proposal. When it comes to real numbers, immigrants are not a liability but a benefit to the US economy.

If Trump’s State of the Union was a manifesto of mistruths, then his budget proposal is a poorly concealed confession. The economy isn’t working for most Americans, and Trump’s plans for growth promise to benefit even fewer. Poor people know this—black, white, and brown—which is why Trump didn’t win a single demographic in 2016 that makes less than $50,000 a year. His campaign advisers have told him the economy is the message to run on, but it may well be his greatest vulnerability. If Democrats want to build a coalition that can beat him, they would do well to start talking about the real costs of his lies.