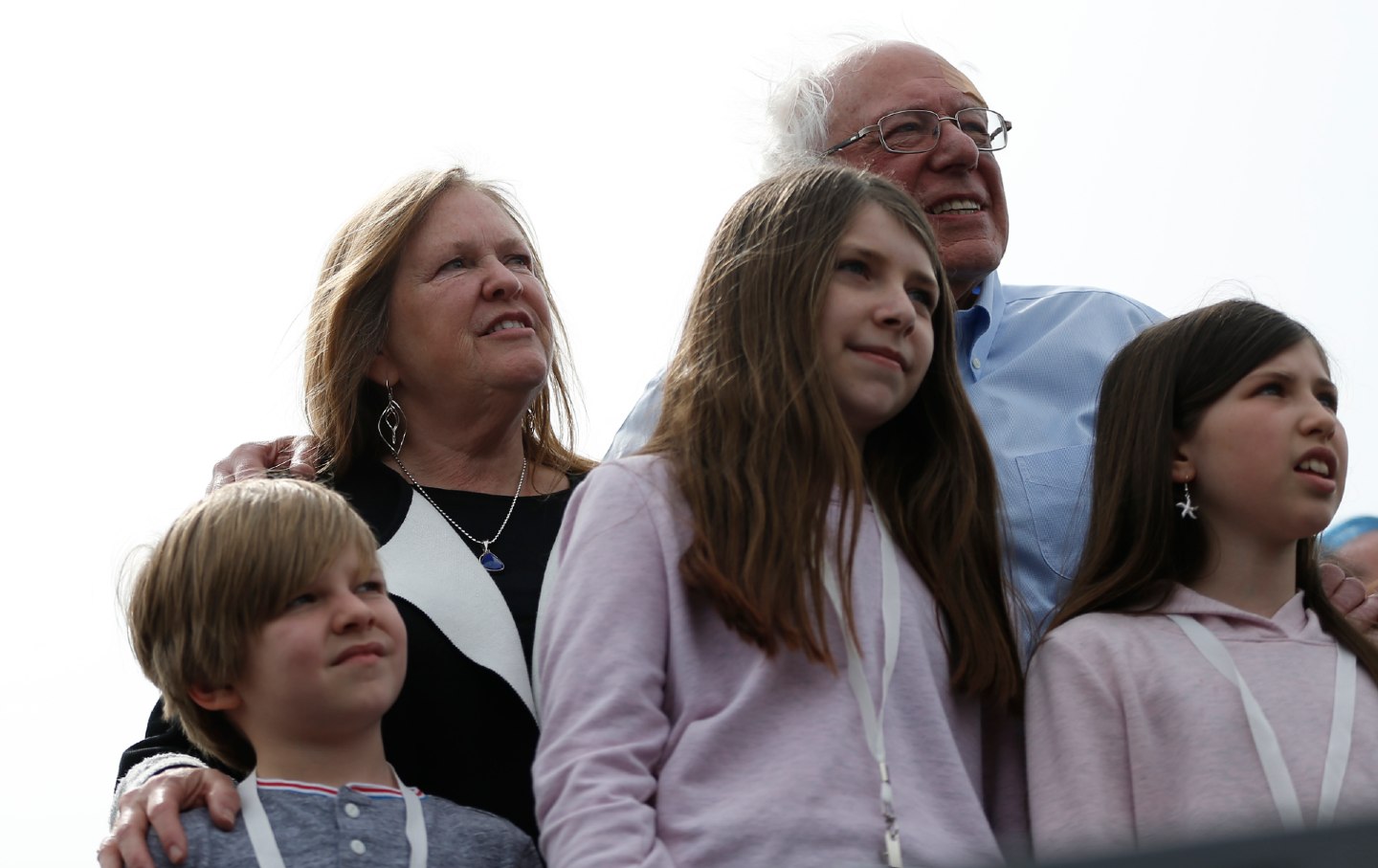 Senator Bernie Sanders and his wife Jane appear on stage with their grandchildren after a campaign rally in San Francisco, California. (Stephen Lam / Getty Images)

This week, the Democratic Majority for Israel (DFMI), a new pro-Israel organization founded by AIPAC-affiliated politicos, launched its first major ad buy just ahead of the Iowa caucuses: a nearly $700,000 salvo against Senator Bernie Sanders.

Part of what’s notable about the ad by the pro-Israel group is that it doesn’t mention Israel, Palestine, or foreign policy at all. Instead, the ad casts doubt on an issue very important to all Democrats: the possibility that Zayde Bernie (Grandpa Bernie) might beat Donald Trump in the general election.

That a Democratic pro-Israel group is attacking the only serious Jewish presidential contender is already outrageous. Sanders himself is essentially a progressive Zionist. But Sanders is also unquestionably the presidential candidate furthest to the left on Israel/Palestine. That a conservative pro-Israel group is pushing ads against him—even ads that seem relatively off-topic—isn’t really so surprising. However, underneath this particular ad campaign, and indeed behind the misleading claim that the group speaks for the “Democratic majority for Israel,” can be seen an age-old right wing strategy: weaponizing genuine Jewish communal fears to divide and attack the left.

This strategy was front and center at AIPAC’s conference last year. Amid the usual battery of panels and speeches reaffirming the America/Israel special relationship—and much breath spent vilifying Muslim Representative Ilhan Omar—the conference took aim at a new old adversary: socialism. American Democratic Socialism, popularized by Bernie Sanders during his campaign for president in 2016, has exploded in growth since the subsequent election of Donald Trump. Despite repeated and shrill claims to bipartisanship, the AIPAC conference’s focus mirrored closely the Republican Party’s objectives in attacking Democratic politicians for socialism and anti-Semitism.

That AIPAC considers attacking a Muslim representative, lambasting Palestinians, protecting Israel, and fighting socialism all part of the same fight says much about the emerging formation of the new pro-Israel politics. It underlines the fact that support for the Israeli government can no longer be considered in isolation from other right-wing causes. In a way, this is the right-wing version of what is sometimes called “intersectionality.” In a progressive context, intersectionality is the ligature of solidarity—referring to the essential interconnectedness of the many struggles for liberation. But the right has always had its own form of intersectionality: common cause among the conservative and moneyed interests that are its bedrock. It is these interests, not Jewish ones, that give life to groups like DMFI. And it is these interests that Sanders lambasts in almost every speech. Given that the attack ads resulted in an additional $1.3 million raised by the Sanders campaign in a single day, the entire episode only illuminated the threat posed by Sanders’s broad-based, working-class movement.

The irony is that a pro-Israel organization releasing attack ads that have nothing to do with Israel actually reveals much about the way Israel has been used to suppress the broader left. Non-Jewish support for Israel and Zionism has always been a long-term marriage based on short-term common interests. This fact is thrown sharply into relief by the growing power of Christian Zionism—some Christian Zionists openly credit the Book of Revelation for inspiring their support. It also explains the Israeli government’s cozy relationship with far-right leaders the world over. Of course, the pro-Israel movement could have gone another way; from Israel’s earliest days, many well-known Israeli writers and thinkers argued that embracing the left is critical to the survival of the Jewish state, rather than a threat to it. But the ongoing annexation of Palestine, given a bright green light by Trump’s “peace plan,” serves only to cement the crushing reality of right-wing dominance in their country—and ours.

Maintaining that dominance—and stifling the emergent left—is the common interest of non-Jewish but Israel-focused groups like AIPAC and DMFI. These groups and their work dangerously contort our collective Jewish interest into a weapon for use against their political opponents. Anyone genuinely concerned about Jewish life in the United States should recognize that groups and interests hindering the fights for free health care, college, and more—changes that would benefit Jewish Americans as much as everyone else—does not have concern for Jewish people, or anyone but themselves, at heart.