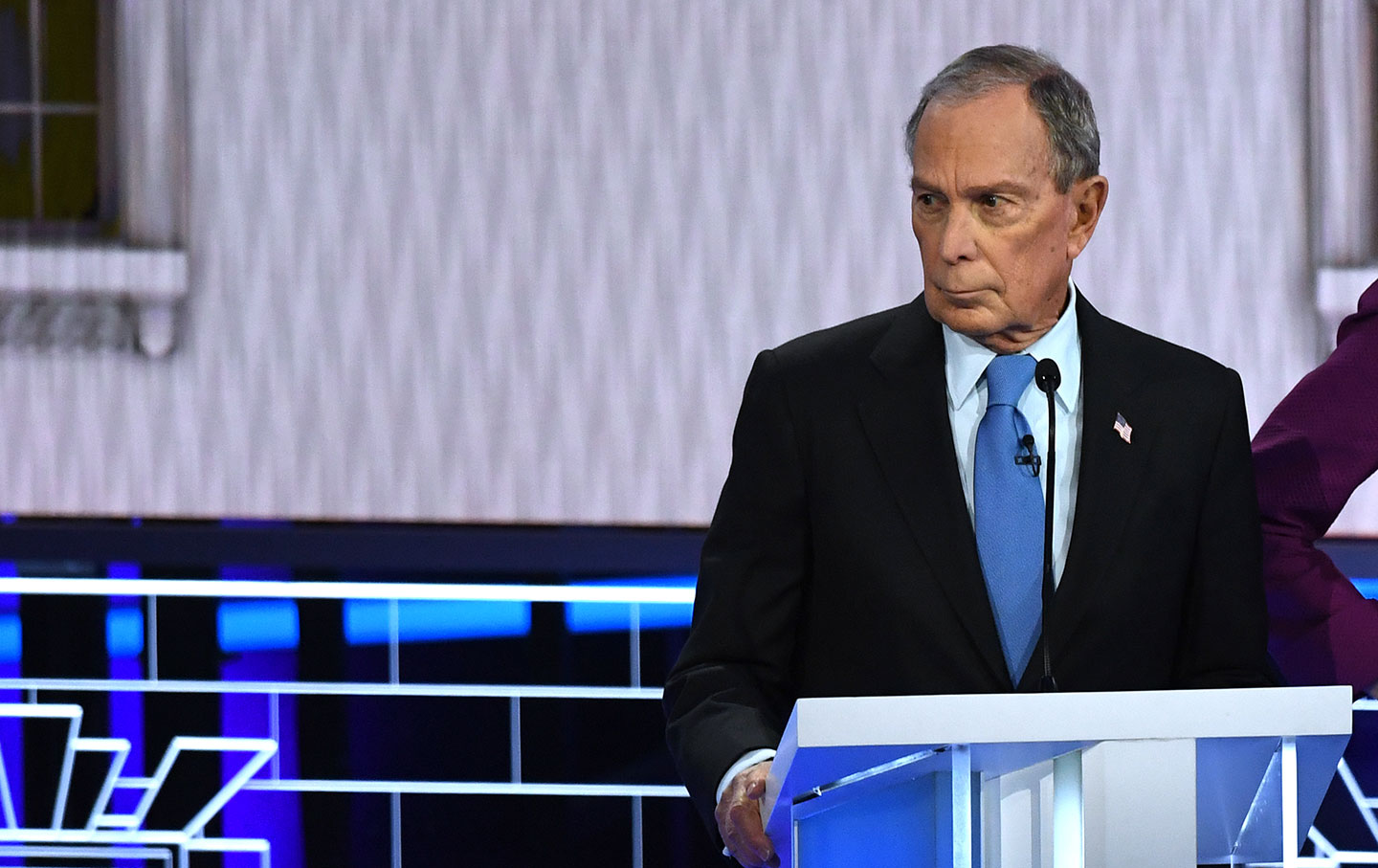 Running for his second term as New York mayor in 2005, Michael Bloomberg decided to duck a debate at Harlem’s storied Apollo Theater. Maybe he was afraid of its legendary hook.

If Wednesday night’s debate had been at the Apollo in its heyday, Bloomberg would have gotten the hook. From the opening minutes, when Senator Elizabeth Warren won the debate with an amazing head-fake—making us believe she was talking about sexist Donald Trump (“a billionaire who calls women ‘fat broads’ and ‘horse-faced lesbians’”) when she was talking about sexist Michael Bloomberg—to the long stretches when he disappeared almost completely, the billionaire former New York mayor proved he was unready for prime time, no matter what his viral ads and witty memes may say.

A week ago, I called Bloomberg “the phantom of the primary” and said that Democrats should lure him out from behind his ads to the debate stage, no matter how much they resented that the qualifying rules were changed for him and not for candidates like Senator Cory Booker or former HUD Secretary Julián Castro. I hate to say I told you so… actually, I like saying it, I just don’t get to very much. But yes, I saw Wednesday night’s debacle coming.

Let’s get this out of the way: Warren won the debate. She wiped the floor with Bloomberg.

But as excellent as Warren’s debate performance was—and it had to be; she’s fighting for political oxygen as the media continues to erase her, even on Thursday morning—the big story is Bloomberg’s collapse. How does a man who was mayor of the publicity capital of the world wind up so unready for the spotlight?

Maybe it’s a billionaire problem: You’re so rich no one ever tells you the truth, which is that you come off as an arrogant, above-it-all jerk in the best of times, and when things are tough, a pouty plutocrat.

Just one example: It took me a few months of doing television to realize the camera might always be on you, and therefore you shouldn’t roll your eyes, smirk, or scowl—unless you intend to. Bloomberg seemed to have no idea that he could be seen at any time looking bored, peeved, or fed up, or some combination thereof, which is how he looked throughout most of the debate.

Still, Bloomberg seemed to have prepared for the attacks—even if he didn’t fend them off well. Confronted by the moderators about the sexual harassment lawsuits his company has faced, and prodded by Warren about the nondisclosure agreements that have thwarted accurate reporting about them, he said this:

None of them accuse me of doing anything, other than maybe they didn’t like a joke I told. And let me just—and let me—there’s agreements between two parties that wanted to keep it quiet and that’s up to them. They signed those agreements, and we’ll live with it.

I mean, that’s terrible, but at least it’s an answer.

But he offered no affirmative vision for his candidacy. While I love his ads for the way they trash Trump, and while I wish our existing Democratic field talked more about Trump’s lawlessness, Bloomberg doesn’t seem to have realized that Democrats are currently competing over who can rebuild the opportunity society we once were, for at least a few decades, at least for white people: when unions were strong, public universities were expanding, and the social safety net was growing.

Here’s the essence of his pitch:

I’m a New Yorker. I know how to take on an arrogant conman like Donald Trump, that comes from New York. I’m a mayor or was a mayor. I know how to run a complicated city, the biggest, most diverse city in this country.

I’m a manager. I knew what to do after 9/11 and brought the city back stronger than ever. And I’m a philanthropist who didn’t inherit his money but made his money. And I’m spending that money to get rid of Donald Trump, the worst president we have ever had. And if I can get that done, it will be a great contribution to America and to my kids.

Seriously, that was it. I live in New York, I was born in New York, and I love New York. But there’s not a word in there about the issues facing the country. Senator Bernie Sanders dramatically changed the terms of debate back in 2016—and Sanders is the front-runner now. Bloomberg, whom many see as the establishment’s best answer to Sanders, turned out not to have an answer at all—which is why many named Sanders the winner of Wednesday night’s debate. (Another reason? Man, the mainstream media hates Elizabeth Warren.)

Challenged by former vice president Joe Biden (the former front-runner whose candidacy Bloomberg mortally wounded) about his criticism of the Affordable Care Act, Bloomberg mustered this: “I think at that time I wrote an article praising Obamacare. It was either in the New York Post or the Daily News. So the facts are I was there.” Either the Post or the Daily News? The confusion makes me wonder if he’s even actually a New Yorker.

What Trump has done to [the ACA] is a disgrace. The first thing we’ve got to do is get the White House and bring back those things that were left and then find a way to expand it, another public option, to having some rules about capping charges. All of those things. We shouldn’t just walk away and start something that is totally new, untried.

Mayor Mike, with all the money you’re spending, can’t you pay a few policy people?

But his worst answer came in response to a predictable question about his “stop and frisk” policies, only stopped when a judge ruled them unconstitutional. Look at how he phrases his reply:

Well, if I go back and look at my time in office, the one thing that I’m really worried about, embarrassed about, was how it turned out with stop and frisk.

“The one thing that I’m really worried about, embarrassed about.” Yes, because it is likely going to kill your campaign with black voters (even if black elected officials support you because your philanthropy and campaign spending has done the right thing, repeatedly, especially since your time in office). Bloomberg went on to give a garbled answer about his rationale for supporting “stop and frisk” and then not supporting it, but the tell was in that “worried about, embarrassed about.”

I’ve made it clear Joe Biden is not my candidate this year. But let me also say: The Democratic Party establishment that tried to sell him to us as the “electable” one had some points in its favor. As a senator, Biden made his share of mistakes—his treatment of Anita Hill, his 1994 crime bill, his support for bankers and credit card companies over consumers, his wishy-washiness on abortion—but he was overall a liberal, and a loyal number two to our first black president. That didn’t win me over to Biden, but I get it.

But then it turned out he maybe wasn’t the most electable, because he wasn’t running a great campaign, and he cratered in Iowa and New Hampshire. Even before that happened, though, some establishment folks began selling us on Bloomberg. Mainly because he has the money to defeat Trump.

But now we’ve seen him on the debate stage, where not only Warren but Biden (and everyone else, to be honest) blew him away. What happens now? The Washington Post reporter who covers campaign finance tweeted this after the debate:

Several donors and fundraisers who were on the Biden/Bloomberg fence are texting me about their disappointment with Bloomberg tonight.

One said when asked about Bloomberg: “An unmitigated disaster. … Bloomberg isn’t the answer, that’s for sure.”

Of course, Bloomberg is self-funding his campaign and doesn’t need their money—but he needs their confidence. Maybe he can spend his way out of the hole he just dug for himself. Or maybe wealthy Democrats will realize that either Warren or Sanders are a better bet to beat Trump and save the democracy they purport to care about, even if it costs them money in taxes.

If we’re forced to choose between two sexist billionaires, I know how I’d vote—for the one who’s not a fascist, Bloomberg. But I’m not sure everyone would clearly see the difference, at least from last night’s debate.