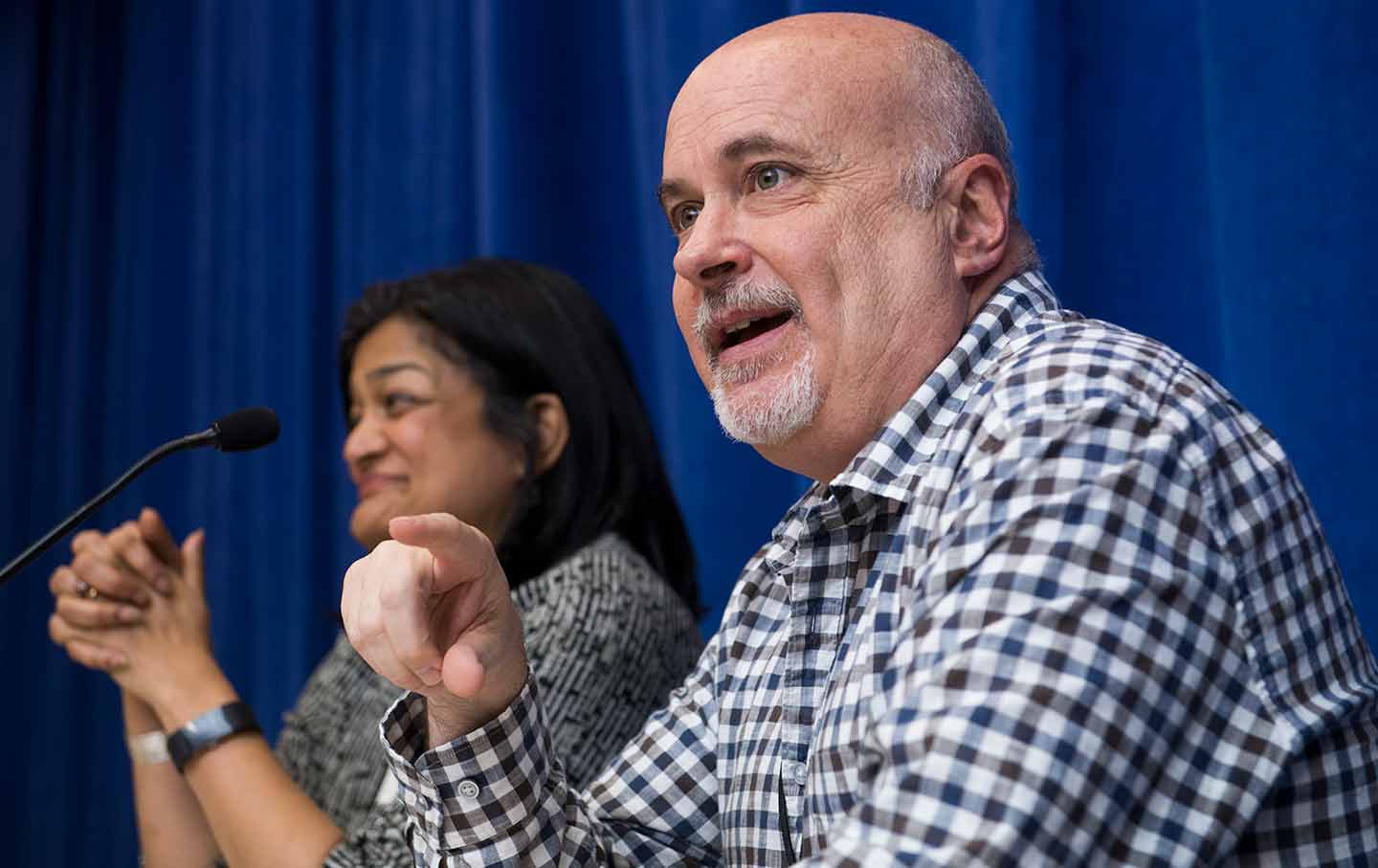 Mark Pocan and Pramila Jayapal talk with the media at the House Democrats' 2019 Issues Conference at the Lansdowne Resort and Spa in Leesburg, Virginia, April 11, 2019. (Photo By Tom Williams / CQ Roll Call via AP Images)

Congressional Progressive Caucus cochair Mark Pocan is a Wisconsinite, and Wisconsin has a lot to do with why Pocan announced an early endorsement of Bernie Sanders last week.

To secure the presidency in 2020, Pocan and a lot of other Democrats believe their nominee must take the state that backed Democratic nominees for president in every election from 1988 to 2012, but where Trump beat Democrat Hillary Clinton by 22,748 votes in 2016. And Pocan is convinced that the senator from Vermont is uniquely positioned to win Wisconsin and other Great Lakes battleground

Noting that Sanders swept Wisconsin’s 2016 Democratic primary and that the senator has kept active in the state, the congressman says, “Not only did [Bernie Sanders] win 71 of 72 counties, but [he] also won nearly three-quarters of young voters and independents who voted in the primary. Bernie’s strong and unwavering advocacy for working families resonated in my state. In 2020, he will carry Wisconsin and the upper Midwest.”

For a lot of DC-based political strategists and pundits that might be a surprising assertion. There’s still a lot of skepticism on the part of Democratic strategists and campaign donors regarding Sanders’s candidacy, even as polls have consistently suggested that the senator from Vermont would be a strong nominee against Trump in many of the battleground states that Democrats narrowly lost in 2016. Talking heads love to dismiss Sanders, a democratic socialist who proposes “a political revolution,” as “unelectable.”

Bernie Sanders Is Fed Up With Republican Obstruction—and Democratic Caution

But Pocan, who represents an urban, suburban, and rural district that stretches across Wisconsin from the college town of Madison to farm communities not far from the border with Iowa, argues that the pundits should get out of Washington and talk to the people he spends time with. “The electability discussion is very different outside Washington. You don’t hear people dismissing Bernie Sanders,” he says. “You hear people saying, ‘You know, this is the guy who could beat Trump.’”

With the Democratic presidential competition moving into high gear, the contenders are scrambling to collect endorsements, especially from high-profile members of the House who have been leaders on progressive issues. Candidates sometimes have to court representatives from key states over a period of weeks or even months to gain backing that can lend credibility and organizational strength to their bids.

Pocan’s endorsement was a coveted one. A savvy strategist who is respected for his knowledge of the politics of Wisconsin and the other battleground states, the congressman does not always weigh in regarding the competition for his party’s presidential nomination. He may prefer a particular candidate, but he often holds back to see how the contenders run their primary campaigns. For instance, though he voted for Sanders in the 2016 Wisconsin primary, Pocan made no formal endorsement.

As the 2020 race ramped up last year, the representative got calls from various campaigns. He decided not to make an endorsement until after the start of this year. But he knew where he was headed. “I started moving closer to getting behind Bernie, after watching him do well debate after debate.”

By the time Sanders called, Pocan explained, he was ready to jump in not just as a supporter but as a surrogate who will campaign for Sanders in states across the country. He’s in eastern Iowa this weekend with another prominent Sanders backer, New York Representative Alexandria Ocasio-Cortez.

Pocan and AOC do not always back the same candidates. In this year’s Massachusetts Democratic Senate primary, for instance, the New Yorker is for incumbent Ed Markey, who has worked closely with her to advance the Green New Deal, while Pocan supports challenger Representative Joe Kennedy III, a CPC member. When Pocan came out for Sanders, however, AOC tweeted: “Such great news—thank you Mark! Let’s do this, Wisconsin!”

Pocan will make a number of Iowa stops for Sanders over the next week, and has already appeared in Nevada for the presidential contender. But he will necessarily focus on Wisconsin, the battleground state that many observers suggest could be decisive in the fall of 2020.

Pocan roots his own electability argument for Sanders in his experience as a Democrat who has won resounding victories running on the issues that the Vermonter emphasizes. His southern Wisconsin congressional district favors Democrats. But it includes counties that voted for Trump.

Notably, Pocan has won those counties as an openly gay man who talks a lot about economic, social, and racial justice but who also speaks a progressive populist language that highlights the importance of funding rural schools, saving small-town post offices, and keeping dairy farmers on the land. In addition, Pocan points out, he is a native of the former auto-making center of Kenosha, Wisconsin, a city national media has focused on a lot as a place where Trump has made inroads among union members.

A longtime union stronghold that was once a bastion of Democratic strength, Kenosha County backed Trump by 255 votes out of almost 75,000 ballots cast in 2016. The Kenosha area is now a key 2020 battleground. Trump has already visited it, as has Sanders.

In a nationally circulated video announcing his endorsement, and in an interview with The Nation, Pocan argued that Sanders can excite and mobilize working-class voters in communities like Kenosha, which have lost major manufacturing facilities in recent decades, and in the rural stretches of historically Democratic counties.

The key, says Pocan, is to deliver a bold message on jobs, wages, and labor rights. That’s a message that can win back a few swing voters but, more importantly, it helps to renew enthusiasm among frustrated working-class people who may not have bothered to vote in 2016, and it connects with new voters—especially the young.

One of the few union members in the House—he’s with the International Union of Painters and Allied Trades—Pocan says, “I’ve known Bernie to be a champion for workers and unions since I was a local elected official. He has spoken truth to power his entire political career.”

The two have worked together closely in recent years, sponsoring Senate and House versions of major legislation, such as the pro-labor Workplace Democratic Act. Pocan and Sanders have also worked together to stop US involvement in endless wars in places like Yemen. And they share a commitment to economic and social and racial justice, along with a faith that the United States must move aggressively in response to the climate crisis.

On many of these issues, they have worked, as well, with CPC cochair Pramila Jayapal, who formally endorsed Sanders on Monday—with the message: “We are building the progressive movement that will bring justice and opportunity, and transform our country.”

While he delights in discussing the issues on which he agrees with Sanders, in conversation, Pocan keeps coming back to the “electability” question that has so obsessed Democrats as they prepare to take on President Trump and a Republican Party that has made itself over as the tribune of Trumpism. “We need to make the strongest possible case to the public on why Donald Trump needs to go,” says Pocan. “The toxic political climate that Trump has fostered needs the best possible antidote, and that antidote is Bernie Sanders. I needed to get in this early to help do my part in getting us to nominate the strongest candidate to oppose Trump.”