A polemic against the Democratic Party titled “A Party Afraid of the Truth” sounds like the latest Bernie-or-bust take on the 2020 nomination process. Based on the title alone, you can probably guess the article’s complaints: Stop blaming young people, offer voters a coherent vision, propose something other than “We are not the Republicans.” The left-leaning view of what ails the Democrats has been said—and said repeatedly since 2016. But mainstream Democrats have made it clear that they are not interested in this unsolicited advice.

Fair enough. The left and the center have been at odds in the Democratic Party for decades, and neither faction is eager to be lectured by the other.

Perhaps, though, the center would be more willing to listen to itself. The antiestablishment broadside about a timid Democratic Party was from 1990 and came from a group associated with Bill Clinton, Al Gore, and, yes, Joe Biden. In the mid-1980s, the New Deal liberal coalition stitched together by Franklin D. Roosevelt still dominated the party, but a new faction of moderates called the Democratic Leadership Council (DLC) had emerged.

The activist Al From formed the DLC in 1985, after Walter Mondale’s landslide loss to Ronald Reagan in 1984. It increased in visibility and influence in Democratic politics after the gray, lifeless campaign of George H.W. Bush defeated the even grayer, even more lifeless Michael Dukakis campaign in 1988. That election was the fifth loss in six presidential elections for Democrats. And the only win—Jimmy Carter over Gerald Ford in 1976—was arguably a fluke stemming from a post-Watergate, anti-Republican backlash. Simply put, Democrats could not seem to field competitive presidential candidates, despite running strongly in Congress and at the state level at the time. Their candidates not only lost, but in the cases of George McGovern (1972) and Mondale, they were walloped.

The goal of the DLC was to reposition the party closer to the ideological center. Its points of departure from the dominant liberal view of the time were on economic policy. It rejected redistributive economic populism and championed the free market and what it considered mainstream values like being tough on crime and reshaping welfare. The emphasis on crime, welfare, and “values” was an effort to reverse Democratic losses among—stop me if this sounds familiar—non-college-educated white men, which was once the core of the Democratic base.

“MAGA Republican” Is a Distinction Without a Difference

How Biden Can Save Democracy From the GOP

Pat Caddell, a strategist for and friend of the DLC, wrote “A Party Afraid of the Truth” for the December 1990 issue (Vol. 2, No. 4) of the group’s in-house quarterly magazine, The Mainstream Democrat (renamed The New Democrat in 1991). The magazine was part of the post-1988 election push by the DLC to rebrand the Democratic Party as a kind of third way, neither liberal nor conservative but with components of both ideologies. The Mainstream Democrat was, like the DLC itself, a policy and advocacy forum for moderate Democrats aimed at Democratic Party insiders, political and campaign professionals, activists, interest group leaders, and the kind of high-information voter who watched Meet the Press religiously. Regular contributors to The Mainstream Democrat include now-famous elected officials like Clinton and Gore, as well as policy insiders who remain influential 30 years later. Caddell, a veteran of the 1976 Carter campaign, was considered a dissenting voice among Democrats, an outsider who prided himself on being blunt and not apologizing for hurt feelings.

What is striking about The Mainstream Democrat/The New Democrat is the anger of the magazine’s earliest years. Before Clinton’s 1992 victory, which established the DLC as the victor in the intra-Democratic fight, the group articulated exactly how its party was broken. The effect is that the tone of these moderates from 1990 is remarkably like that of leftists in 2020.

Consider the advice Caddell levels at the Democratic establishment. He opens by slamming the party for making excuses for its 1988 defeat, asserting that Dukakis lost, in part, because “he ran one of the breathtakingly worst campaigns of all time.”

The reason Dukakis lost was because he had no message. Good jobs at good wages is not a message. Saying that the election is not about ideology but about competence is a joke.

Elections are about ideology. They’re about values and what you stand for. We didn’t offer any vision for the future, any argument for change. The kind of change we were offering said, “We’ll get rid of their hacks and put our hacks in.”

The Democratic Party has become the other Inside party. In 1988 there was an incumbent inside party and a challenger inside party. There was no candidate that got up and said we must have a crusade to save America.

Find and replace 1988 with 2016 (or 2020?) and Dukakis with Hillary Clinton or Biden and these could be words straight from a Bernie Sanders surrogate. When Caddell later says, “There is only one political party in this country. It’s called the Washington Beltway political party,” it is a Sanders refrain verbatim.

Insurgent moderates passionately believed these familiar criticisms in 1990. Now that they have become the establishment, the same criticisms are no longer welcome.

Evidence of decline in the party can be found in our everlasting search for a gimmick to get us out of this, the right word or phrase to win.… The lesson of 1988 is that the party would rather lose than win if the price of winning means having to make real change.

His laundry list of complaints about culprits—the search for the easy answer, the influence of K Street lobbyists, the whirlpool of money in politics, comfortable establishment Democrats unwilling to rock the boat—concludes with a devastating warning that the party was, in 1990, staring into an abyss of irrelevance:

[The new generation of Democrats has] the opportunity to help tear this country apart or take it to great heights. It cannot be done by incrementalism or in a system that is engaged in protecting the status quo.

If a candidate wants to take that message, it’s an outside message. It’s a message of change and it’s a winning message. And the question is whether this party will learn to grasp it or whether the party will disappear because somebody will come along and do it for them.

Harsh words. But in 1990, Democratic moderates felt this strongly because the party kept losing to beatable candidates like Richard Nixon and Bush. The Democratic Party had become everything Caddell and the DLC said it was: wedded to the status quo, willing to lose rather than to change, and unwilling to take responsibility for its failures.

From was savvy about promoting his movement’s most charismatic young (for politicians, that is) prospects. Every issue of The Mainstream Democrat mentions Bill Clinton at least once and usually more. From knew talent when he saw it, and he pushed it to the forefront. He knew that the candidate matters in presidential elections as much as ideology; the moderate DLC approach succeeded with captivating candidates like Bill Clinton and Barack Obama (who, soaring 2008 campaign rhetoric aside, described his ideology as similar to a 1980s moderate Republican’s) while failing with less exciting messengers like Gore, John Kerry, and Hillary Clinton. 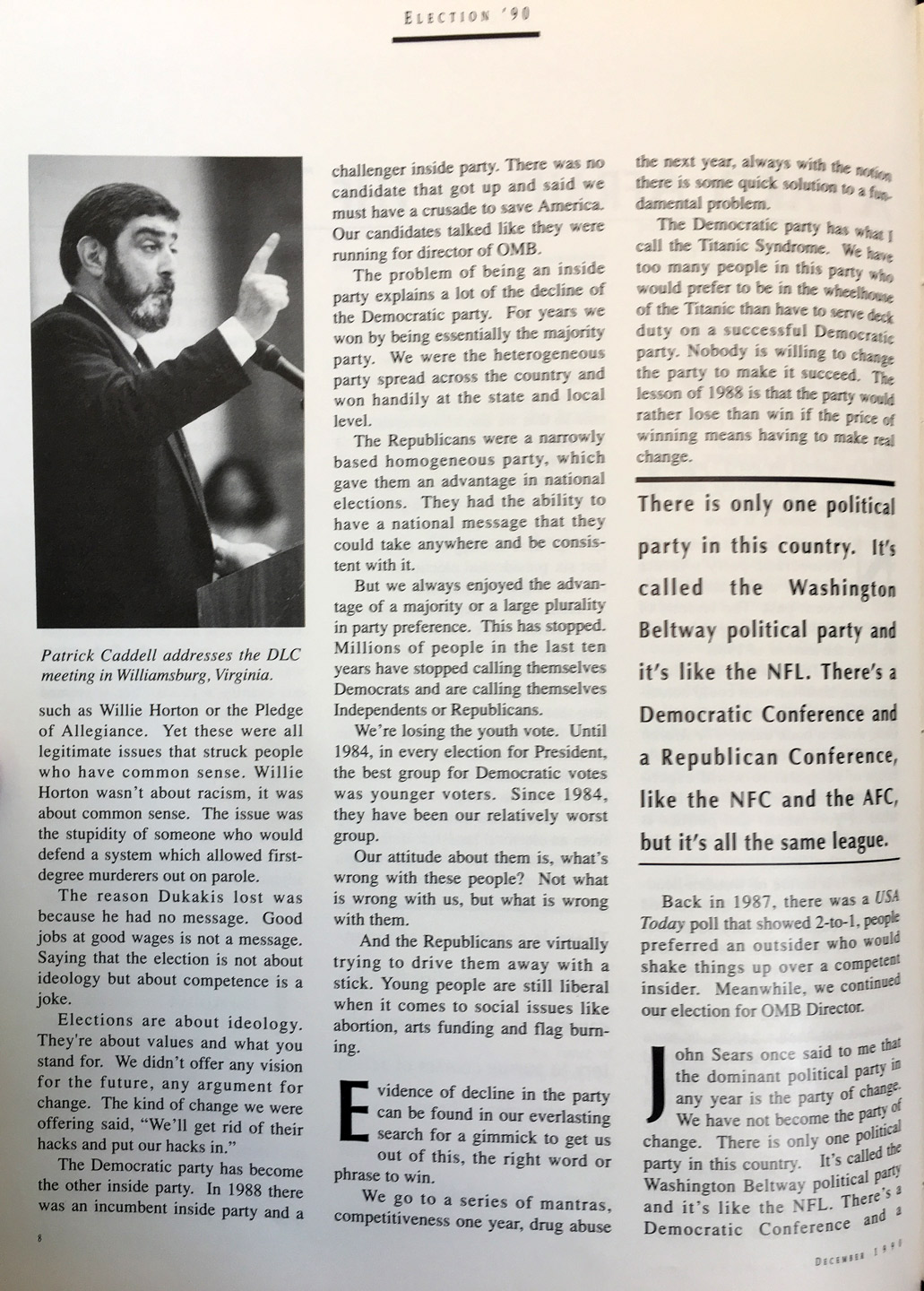 A page from the 1990 article “A Party Afraid of the Truth” in “The Mainstream Democrat.”

In another issue of The Mainstream Democrat, a short article promotes another DLC familiar face, Biden. “The Biden Approach” details a novel proposal to help Democrats appear tougher on crime by diverting offenders into “boot camps,” a compromise between prison and parole. In 1990 that idea qualified as fresh and exciting. For that matter, so did Biden, who was only 48 at the time.

Today, Biden is no longer fresh and exciting. He represents a Democratic Party that people like him railed against in 1990: a stagnant, comfortable group of hacks (Caddell’s preferred insult) who blame everyone but themselves for their party’s failures. They are hostile to the younger generation. Like teenagers who hated their parents but grew up to become them, the upstarts have been changed by time in ways they never predicted would happen.

The challenge of all political insurgents is that sometimes they get what they want—power—and they must transition from railing against the establishment to being the establishment. For all the youthful vigor of the movement that brought Bill Clinton to prominence, 30 years at the heart of Democratic politics has created a status quo every bit as sclerotic, insular, and self-destructive as the one it fought in the 1980s.

If today’s centrist, establishment Democrats are unwilling to hear warnings coming from the left, perhaps they will heed their own advice from an earlier era. Watching Biden’s campaign for the nomination, I am haunted by the words of rising Democratic star Gary Hart (later undone by an infamous scandal) on the nomination of Mondale in 1984: He was a candidate of “the establishment past, brokered by backroom politics and confirmed by a collective sense of resignation.”

When moderate Democrats were the outsiders, they could see their party’s flaws. Now they believe just as strongly that they have the answers and the outsiders have it wrong. Their own words, three decades old but eerily current, suggest that the mistakes of the past are simply being repeated.