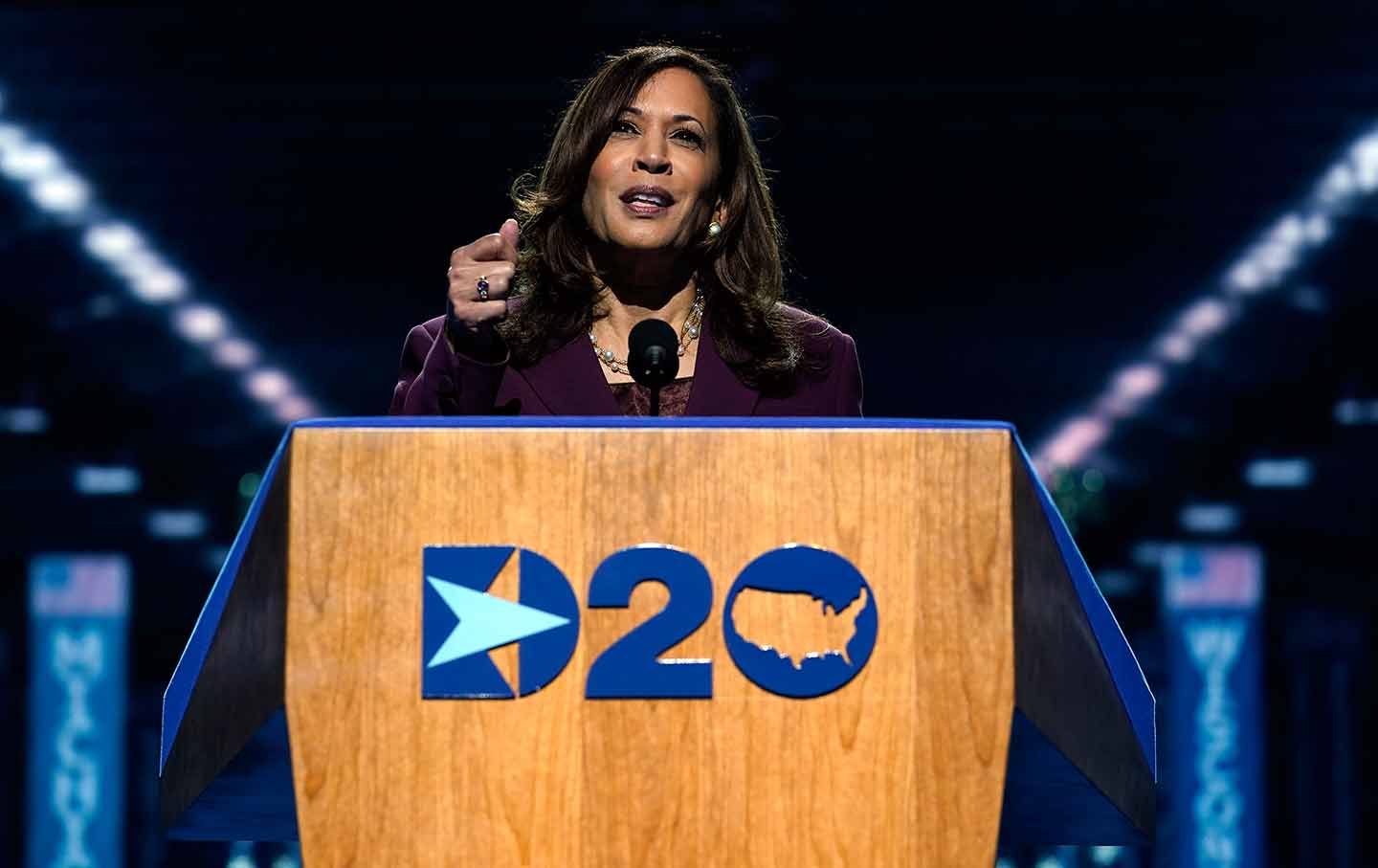 For many Democratic women, Wednesday night’s convention roster heralded a celebration tied up in a well-worn ribbon of grief. As we hailed the historic nomination of Senator Kamala Harris, the first black woman ever chosen as a vice presidential candidate, we also mourned the lost chances of other amazing women who spoke this very same night: Hillary Clinton, the 2016 presidential nominee who won by 3 million votes but lost the Electoral College to Donald Trump, and Senator Elizabeth Warren, whose own inspiring 2020 presidential campaign ran strong, until it didn’t.1

Harris herself had sought the big prize, the White House, until her once-promising campaign ran aground on organizational troubles, plus some racism and sexism tossed like marbles on the slick floor before her. Let’s be clear: The VP pick is no mere consolation prize for Harris. This is huge. Yet many of us expected we’d be watching a convention this summer nominating a woman president for her second term, and when that dream died, nominating the next woman nominee—not necessarily trying to get one of us on the ballot as another white man’s Number Two.2

But was that just my pandemic gloom talking? I began to think so, once I got on a Zoom event early Wednesday evening sponsored by Higher Heights, a national organization advancing the political participation of black women, which endorsed Harris for president and then pushed her for VP. It was part dance party, part testimonial, with MC Lyte as DJ. When she played Beyonce’s version of “Before I Let Go,” rocking dozens of squares of black women, young and old, dancing on their own, I let go of my grief and anger and got ready to enjoy the history-making to come.3

First we had to get through Hillary Clinton, without grief. She gave an object lesson in realism. With her white-blonde hair in a light flip, minimal makeup, looking comfortable on her couch, it was easy to imagine she had just rewatched an episode of Schitt’s Creek before she turned to the camera to tell us to get out and f*(%&ing vote.4

“For four years, people have told me, ‘I didn’t realize how dangerous he was.’ ‘I wish I could do it all over.’ Or worst, ‘I should have voted.’ Look, this can’t be another woulda, coulda, shoulda election,” Clinton said. “Most of all, no matter what, vote. Don’t forget: Joe and Kamala can win by 3 million votes and still lose—take it from me.”5

(An aside: Can you imagine what it’s like to be Hillary Clinton listening to people say idiotic things like they “wish” they had voted? I guess that means for her? I’d probably be in jail if I had to listen to that more than once. Or at least over-consuming Chardonnay.)6

Elizabeth Warren appeared from a pre-kindergarten classroom to highlight her proposal, mostly supported now by Biden, to vastly expand funding for pre-K and other public child care programs. She reprised one of her great campaign trail stories about how she wouldn’t be here—a law professor, a senator, a presidential candidate—without her Aunt Bea. When she told Aunt Bea she didn’t think she could keep working with two young children, her beloved aunt “said the words that changed my life. ‘I can’t get there tomorrow, but I’ll come on Thursday.’ She came with seven suitcases and a Pekingese named Buddy.”7

Warren made the case for an early child education infrastructure that doesn’t force us all to rely on an Aunt Bea—whether we have one or not.8

For a couple of days, the Democratic National Convention schedule made it look like Harris was speaking before Barack Obama (tradition would, of course, dictate after, but you’d kinda understand if she didn’t want to follow the Democrats’ best orator of my lifetime). In the end, the former president came out first and laid the groundwork for Harris’s historic speech, and Biden’s essential run. Speaking of Trump, he lamented:9

For close to four years now, he’s shown no interest in putting in the work; no interest in finding common ground; no interest in using the awesome power of his office to help anyone but himself and his friends; no interest in treating the presidency as anything but one more reality show that he can use to get the attention he craves. Donald Trump hasn’t grown into the job because he can’t.10

Obama talked up Biden as “a brother,” and said of Harris, “In my friend Kamala Harris, he’s chosen an ideal partner who’s more than prepared for the job; someone who knows what it’s like to overcome barriers and who’s made a career fighting to help others live out their own American dream.”11

I can’t help adding the heart of his speech, which was the appeal to unity Obama always got right:12

Whatever our backgrounds, we’re all the children of Americans who fought the good fight. Great grandparents working in firetraps and sweatshops without rights or representation. Farmers losing their dreams to dust. Irish and Italians and Asians and Latinos told to go back where they came from. Jews and Catholics, Muslims and Sikhs, made to feel suspect for the way they worshipped. Black Americans chained and whipped and hanged. Spit on for trying to sit at lunch counters. Beaten for trying to vote.13

If anyone had a right to believe that this democracy did not work, and could not work, it was those Americans. Our ancestors. They were on the receiving end of a democracy that had fallen short all their lives. They knew how far the daily reality of America strayed from the myth. And yet, instead of giving up, they joined together and said somehow, some way, we are going to make this work.14

I’ll always wish this reached my Irish and Italian Republican relatives, and know deep down that it probably didn’t.15

If it was tough for Harris to follow Obama, it didn’t feel that way. She was incandescent, opening by hailing the black women suffragists and other leaders, many shunned or sidelined by white feminists, who “paved the way for the trailblazing leadership of Barack Obama and Hillary Clinton.” Harris did her own roll call: “Mary Church Terrell and Mary McCleod Bethune. Fannie Lou Hamer and Diane Nash. Constance Baker Motley and Shirley Chisholm.”16

Then she added a less-well-known woman to that list: her mother, Shyamala Gopalan Harris, the single mother, civil rights activist and breast cancer researcher who raised Harris and her sister, Maya, in multiple cities across their childhoods, always teaching them leadership and compassion.17

Harris pulled together the twin scourges of the coronavirus and police violence, noting of both: “Black, Latino and Indigenous people are suffering and dying disproportionately. This is not a coincidence. It is the effect of structural racism.”18

This was not a wonky speech, quite the opposite. If you came to hear about her Medicare for All plan (yes, complicated) or any of the issues that occupied time on the debate stage this cycle, you were disappointed. If you came for soaring references to the late John Lewis and Fannie Lou Hamer—and Shyamala Gopalan Harris, whom it was my pleasure to interview 17 years ago—you were happy. “Joe and I believe that we can build that beloved community, one that is strong and decent, just and kind, “she reassured us. “One in which we all can see ourselves.”19

But she was tough as well.20

“I’ve fought for children, and survivors of sexual assault. I’ve fought against transnational gangs. I took on the biggest banks and helped take down one of the biggest for-profit colleges. I know a predator when I see one.”21

She just left it hanging out there. That she didn’t mention the predator’s name was all the more an indictment.22

Trump seemed to get the point, Tweeting impotently:23

BUT DIDN’T SHE CALL HIM A RACIST??? DIDN’T SHE SAY HE WAS INCOMPETENT???24

My Higher Heights Zoom dance party put me in the mood to celebrate all of it. But, of course, the racists are coming for Harris. At the Higher Heights event, actor and activist Yvette Nicole Brown told everyone to be prepared. “I don’t want her to be broken inside because of what she had to endure” come Inauguration Day, Brown told our group. “It’s gonna be ugly. Let’s form a human shield of female blackness—and brothers, you are welcome here too.”26

I’d like to welcome my white sisters—and brothers—too, because I agree it’s gonna get ugly. But Wednesday felt like the beginning of something new and amazing and for now, hard to touch with ugly.27