“Bernie and I just talk about what’s next.” Representative Alexandria Ocasio-Cortez’s recent statement on the New York Times’ podcast The Daily reflected what’s on the minds of many who poured their time, energy, and resources into the progressive candidacies of Bernie Sanders and Elizabeth Warren.

Both presidential bids were as much cause as campaign. Now that the campaigns have ended, what happens to the cause?

Those of us who received our political baptism during the Rev. Jesse Jackson’s progressive, movement-based, presidential campaigns in 1984 and ’88 faced a similar question at the conclusion of his second run. Like Sanders, Jackson offered America a vision of a far more just and equal society; his Rainbow Coalition rocked the political establishment in 1988 when he won the Michigan primary, temporarily taking the lead for the Democratic nomination.

As an idealistic California college student, I gravitated toward Jackson’s campaigns. I ended up running his student operation in the state and became a delegate at the 1988 convention. When it became clear that his opponent, Michael Dukakis, would become the Democratic nominee, it felt like we had failed. But an electoral campaign can make lasting social change that extends far beyond the temporal limits of that specific election. With the clarity of hindsight, I now see what Jackson meant when he said throughout the campaign, “We’re winning every day.”

The legacy of Jackson’s Rainbow Coalition reveals three important lessons for those who came of age in the Sanders and Warren campaigns, as they now seek to make their mark in the coming months and years.

Put People in Positions of Power

Perhaps the most lasting impact of the Jackson campaigns is the empowerment and elevation of the people who were part of that effort. “The most positive thing that came out of the campaign was how it inspired his supporters to run for local office,” Eddie Wong, Jackson’s 1988 national field director, told me recently. “The momentum from the campaign and the infrastructure and alliances that were created laid the basis for several successful efforts.”

I can personally attest to this. The electoral experience I gained during those campaigns—doing media appearances, raising money, and identifying, contacting, and mobilizing voters receptive to the coalition—inspired me to run for office, and educated me about how to win.

In 1990, Mabel Teng, the California state cochair of Jackson’s 1988 campaign, became one of the first Chinese American women to be elected to citywide office in San Francisco when she won a seat on the city’s Community College Board. When I congratulated her at her victory party, she pointed at me and said, “You’re next.” She was right: Two years later, I was elected to the San Francisco Board of Education.

That kind of encouragement and solidarity propelled people across the country to jump into electoral politics—and in the two years after Jackson’s candidacy ended, multiple progressive champions began their political ascent. Barbara Lee entered elected office as a state legislator, Maxine Waters secured a US congressional seat, and Paul Wellstone, who cochaired Jackson’s Minnesota campaign, won election to the United States Senate.

Over the next two decades, Rainbow veterans continued to secure positions of power beyond elected office. Activists inspired by Jackson’s 1984 campaign went on to become labor leaders in places such as Watsonville, California, where Gloria Betancourt and other Mexican American cannery workers led a historic, 18-month strike starting in 1985 that improved conditions for workers throughout the industry. Leaders from that movement later helped transform the formerly all-white Watsonville city council into a body that is now majority Latinx.

In the nonprofit sector, Ben Jealous—who cut his teeth as a teenage field organizer in Jackson’s 1988 campaign—became the youngest-ever president of the NAACP in 2008. He connected its considerable clout to successful efforts to end the death penalty in New Mexico and other states, pass the Dream Act in Maryland, and champion marriage equality across the country.

The Sanders and Warren campaigns could have a similar legacy. Ocasio-Cortez has already emerged as a national leader of the Sanders movement, and African American operative Jessica Byrd, who backed Warren, is becoming one of the country’s preeminent political strategists and experts. Who else will run for office next, and who will manage those campaigns? Who will take the reins of Democratic committees, Super PACs, and key nonprofit organizations? Who will shape and implement pivotal public policies that advance the goals of the movement?

The ultimate point of a populist revolution is to transform priorities and public policies. It is particularly important to choose strategic policy battles that can build on the strengths of the movement.

One such frontier is the expansion of democracy, and the elimination of rules that dilute the power of people of color. Prior to 1984, the Democratic primaries followed a winner-take-all format in which the winning candidate in any given congressional district received all of its allocated delegates. (Republican primaries are still decided this way in some states.) Jackson fought those rules for years, ultimately winning significant changes that lowered the threshold for accumulating delegates. Now, any candidate who secures at least 15 percent of the vote in any state receives a proportional number of that district’s state-level delegates.

That change paved the way for Barack Obama to win the Democratic nomination in 2007. The proportional allocation rules meant that Obama could amass delegates in states with large black populations—even those where Hillary Clinton won overall—and establish a lead that his rival could not overcome.

Other movements for change start at the local level, then gather momentum as they spread across the country. Progressive policy agendas are not limited to what can get through Congress.

Cities in California have already demonstrated this. While extraordinary amounts of time, energy, and resources were poured into national battles over expanding health care coverage, San Francisco showed in 2007 that you could pass a comprehensive health care plan at the municipal level first.

Likewise, Sanders’s campaigns have galvanized a generation with the call to make college free. Michael Tubbs of Stockton, California—then a city council member—welcomed Sanders to his city during the senator’s 2016 presidential campaign. After becoming mayor, Tubbs implemented the Stockton Scholars program in 2018, which guarantees that every high school graduate in the city can get funding to continue their education.

Sanders and Warren supporters live all over the country, and they now have an opportunity to explore and advance their causes at the state and local levels.

Bond with the Black Freedom Struggle

The primary reason that Jackson’s candidacies have reverberated for decades is that his movement came out of—and remained connected to—the African American freedom struggle. Jackson’s involvement extended all the way back to his days as a key lieutenant of Martin Luther King Jr., and continued through his leadership in the civil rights movement in the 1970s and ’80s. 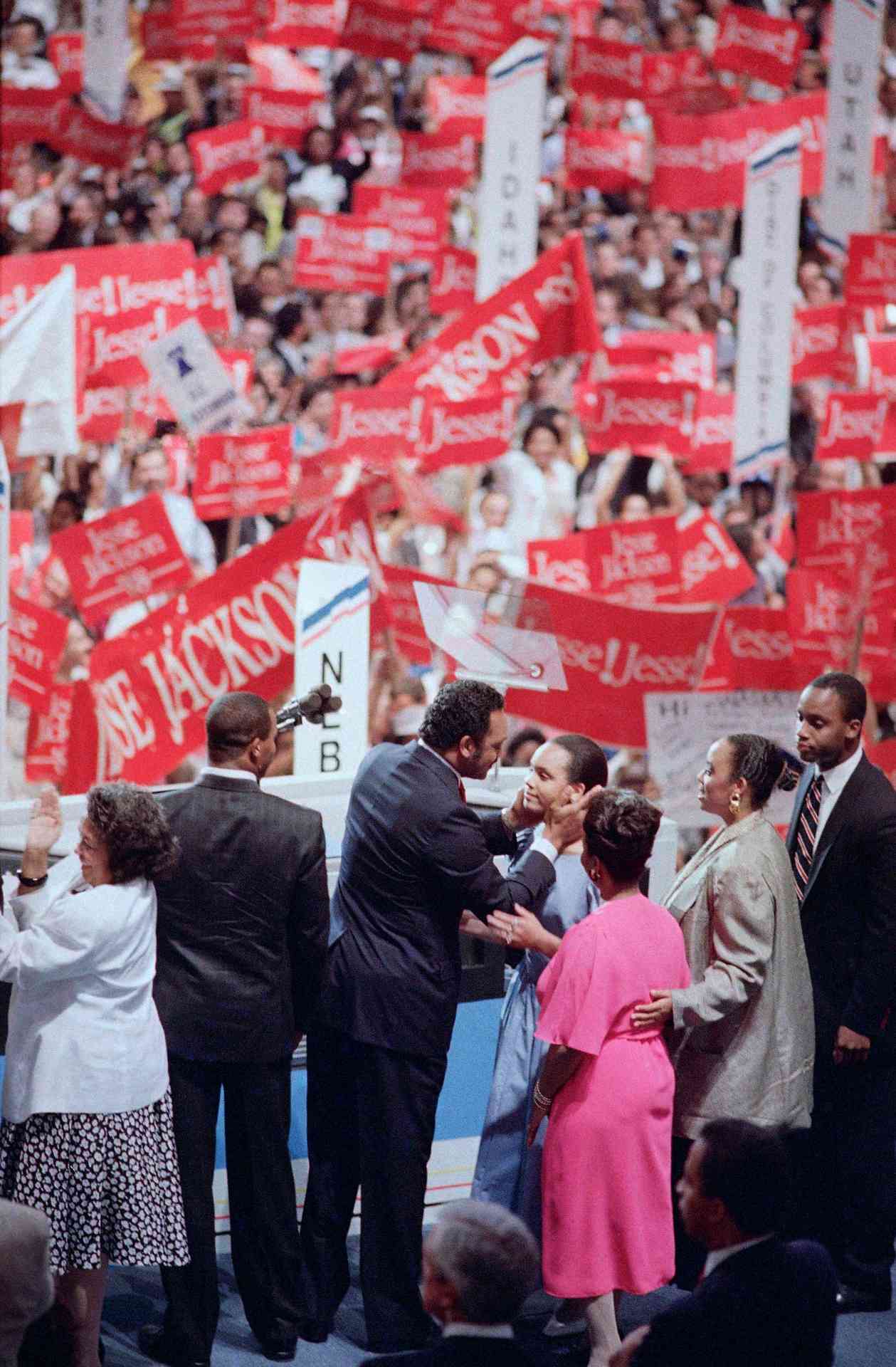 Jackson stands with his family before delivering an emotional speech at the Democratic National Convention, July 1988. (David Longstreath / AP Photo)

His fidelity to the cause inspired historic African American voter turnout that year, propelling his candidacy close to the pinnacle of American politics.

The harsh truth is that Sanders and Warren were unable to convince and inspire many black voters during their campaigns. That failure is particularly cruel because the African American experience lies at the heart of the inequalities and contradictions that they both sought to highlight.

Sanders, in particular, fell short because his language always seemed to reduce the struggle for racial justice to a subset of the larger fight against economic inequality. As Jessica Byrd explained on the podcast Deep Democracy in October: “So much of the nucleus of systemic oppression and injustice [in America] is around black identity in this country, and by centering black people, what we actually do is address the root of the problem…. We can recreate and reimagine a world in which everyone is free, because we have gotten to the root.”

The people who will carry on the legacy of Sanders’s movement must not replicate his error. They will be unable to elevate the leaders and pass the policies that this country needs most without making close connections to the African American struggle for justice and equality. If they can prioritize these relationships in their own communities, it will pay dividends in political and social change.

After the 1988 campaign, I moved to San Francisco, got involved in local politics, and joined a community-based organization called Black Men in Action that was founded by the late Rotea Gilford, who had been a deputy mayor to Dianne Feinstein.

Gilford took me under his wing. I’ll never forget him telling me, “All these years white politicians been leaning on us for support. Well, now I’m going to lean back on them for you.”

When I went to Nancy Pelosi to seek her backing for my nascent school board campaign, one of first questions she asked me was about my ties to the black community. Gilford was true to his word: The Black Men in Action seal of approval helped secure her support, and proved pivotal to my becoming the youngest person ever elected to citywide office in San Francisco at the time.

As Sanders and Warren supporters chart their next steps, they should ask themselves what their connections are to black communities in their area. What black-led groups are they working with, and how are they harnessing the assets of the campaign—the voter ID lists, the donor networks, the volunteer-organizing technology—to strengthen the work of those organizations? Can they recruit people from those communities to run for local office, and promise to put the knowledge and might of their movement behind them?

I left the Democratic National Convention in Atlanta in 1988 disappointed that Jackson didn’t win. I was nonetheless full of hope and optimism about the future of the Rainbow Coalition, and the years that followed his runs showed that the power and energy unleashed by a progressive campaign could still help to move us forward.

Today, the hundreds of thousands of people who participated in or contributed to the Sanders and Warren campaigns face a similar situation. I am a witness to the possibility that just because your candidate does not become the nominee, it doesn’t mean that your cause can’t continue to change the country for the better.