As the presidential election draws near, so does the fear of political violence—and not just among progressives. A concerned law enforcement source provided The Nation with the following Department of Homeland Security intelligence assessment, which deems white supremacists the principal threat to safe elections in 2020. 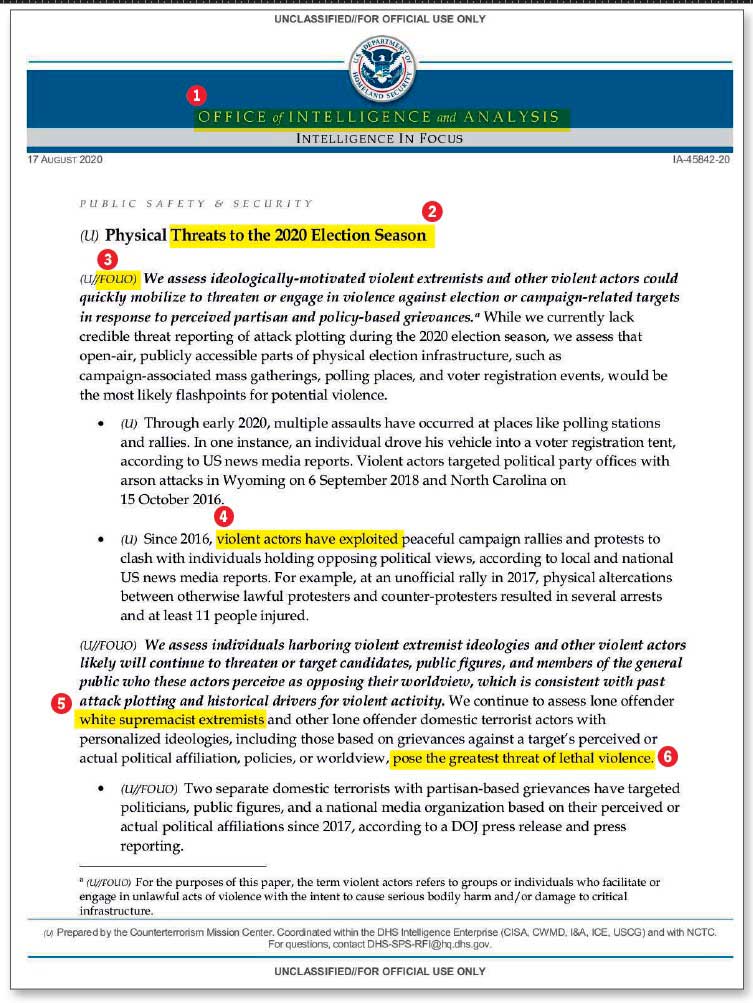 ❶ “Office of Intelligence and Analysis” I&A is one of the array of government organizations that make up the intelligence community, a consortium of elite spy agencies including the CIA and National Security Agency. As a subagency in the DHS, I&A monitors domestic terrorism threats.

❷ “Threats to the 2020 Election Season” President Trump has repeatedly and falsely alleged massive voter fraud in the 2016 election, and he continues to do so ahead of the 2020 election. The Transition Integrity Project, a bipartisan election monitoring group, recently conducted a series of “war games” simulating the 2020 election. The exercises anticipated possible street violence, especially in the event of a contested outcome. “The potential for violent conflict is high,” the organization concluded.

❸ “FOUO” An abbreviation of “for official use only,” it is a security designation for sensitive but unclassified information. It is intended to keep documents from public disclosure.

Is Trump Planning a Coup d’État?

❹ “violent actors have exploited” According to an FBI report obtained by The Nation in June, far-right extremists sought to provoke unrest at protests by violently targeting both civilians and law enforcement.

❺ “white supremacist extremists” In recent years, the majority of extremist-related murders in the United States have been carried out by white supremacists. While the FBI recently elevated “racially motivated violent extremists” to a national threat priority, the Trump administration has reportedly been reluctant to go after them.