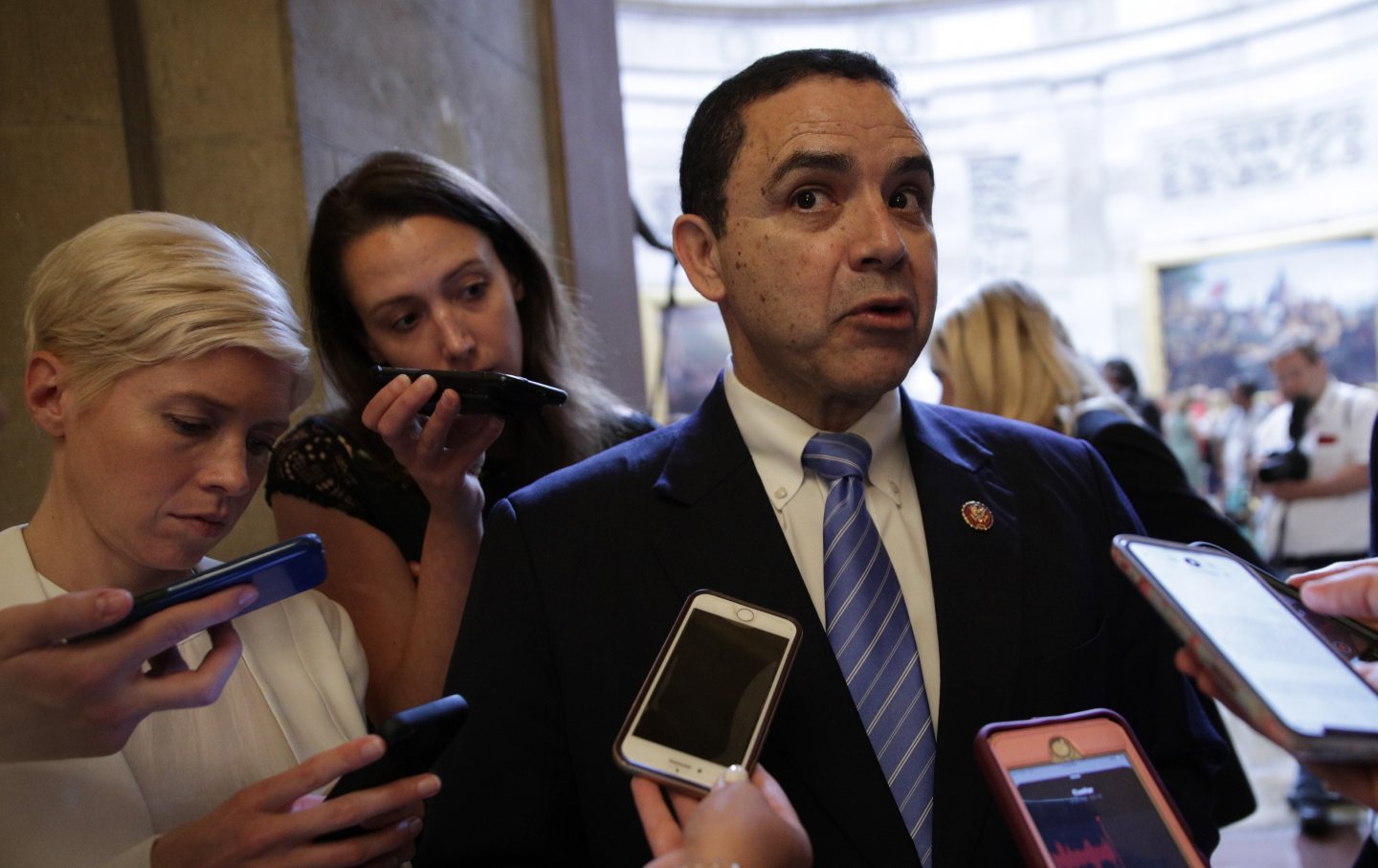 Representative Henry Cuellar (D-TX) speaks to members of the media at the US Capitol. (Alex Wong / Getty Images)

A few hours after Jessica Cisneros voted at her local polling station—a Pep Boys auto shop near Laredo’s Sal Si Puedes neighborhood, where she grew up—the 26-year-old attorney began to knock on doors for one of the last times of her campaign. After nine months, it was finally election day. “I just want to reach as many voters as possible, because that’s what this is really coming down to,” she said. “It’s just a matter of, are we going to get to voters in time?”

This article was produced in partnership with the Texas Observer.

Cisneros had the support of national progressive groups, which wanted to help her defeat longtime incumbent Henry Cuellar in Congressional District 28. The Justice Democrats, Emily’s List, and labor unions had turned their firepower on South Texas—block-walking, running phone banks, and funding a blitz of ads and mailers. Cuellar, a Blue Dog Democrat, has long been a party pariah: a pro-gun, anti-abortion fiscal hawk with close ties to the oil and gas industry, private-prison operators, and congressional Republicans.

As Cisneros doubled back down her second block, a man started blasting “Another One Bites the Dust” as he worked on his pickup truck. “It’s what we’re hoping is gonna happen tonight,” she quipped about Cuellar.

For a moment, it looked like that might just happen. Around 11 pm on Super Tuesday, Cisneros took the stage at a beer garden where dozens of supporters had gathered for her watch party. As she predicted, the race grew increasingly close as numbers trickled in. “Even though we still don’t have results yet, I think one thing is clear: that our movement was victorious tonight,” she told the crowd. “And that’s because this fight has always been about how one of us, a brown girl from our community…could take on an entire machine and make them more scared than they’ve ever been before.”

Throughout the campaign, the district received the most face time from its representative in years, which Cisneros saw as a sign that Cuellar was in trouble. But ultimately, Cuellar hung on to his congressional seat by just under 4 percentage points, a 2,746-vote margin. The loss is a clear blow for progressives, who were hoping to replicate the success of Alexandria Ocasio-Cortez and oust a long-reviled conservative Democrat. Like Ocasio-Cortez, Cisneros ran on a progressive platform that included Medicare for All, the Green New Deal, and a $15 minimum wage. She garnered national attention as she won high-profile endorsements from Bernie Sanders, Elizabeth Warren, and AOC herself. Ultimately, she made the pitch that South Texas was ready and willing to change. 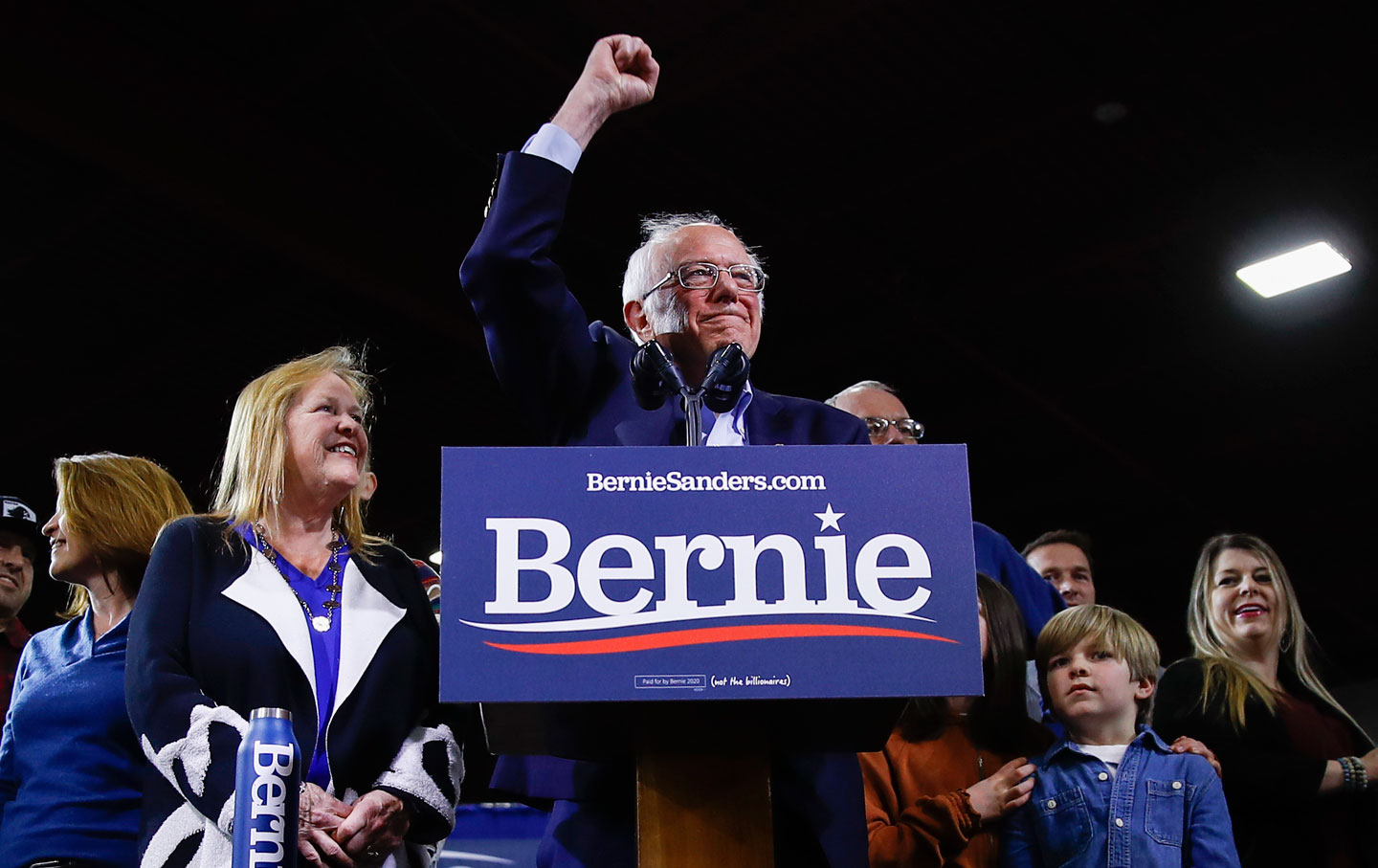 Centrism Is Not Inevitable. A Better Future Is Possible for Texas.

But the Justice Democrats, which recruited Cisneros to run and assisted her campaign, said the Cuellar race was much different than Ocasio-Cortez’s—which it was also behind. “We didn’t have the element of surprise, and the party machine and big corporate donors on the other side fought us back hard,” Justice Democrats Executive Director Alexandra Rojas said in a statement.

Indeed, Democratic House Speaker Nancy Pelosi didn’t back away from her longtime ally Cuellar, even as he became the first Democrat to be endorsed by the Koch network. She joined Cuellar in Laredo to tout his legislative accomplishments in February. “We want this to be not only a victory, but a resounding victory for Henry Cuellar,” she pronounced.

But it wasn’t quite the sweep that Cuellar and his team expected. According to Cuellar’s campaign spokesperson, Colin Strother, their own internal polling had consistently shown Cisneros trailing by double digits until a few days before Super Tuesday. Strother attributed the narrow victory to the huge pile of money spent against Cuellar, not to Cisneros’s political message.

“I mean look, they spent $4 million trashing Henry, and that’s gonna have an impact on anybody,” Strother said. But he said Cuellar doesn’t take the close call as a warning to change his ways. On Wednesday, the congressman was on a 6 am flight to Washington, back to work. “Henry is gonna vote for his values and the values of the district and when the district decides he is no longer doing that, they’ll take care of it,” he said.

Former Webb County Democratic Party chair Sergio Mora said the win proves Cuellar’s bona fides once again. “He had some serious forces lined up against him…and he successfully fought them off,” said Mora, who supported Cuellar’s campaign. “He showed that he will fight back and go toe to toe.”

But Mora says Cuellar “can’t ignore that the Democratic electorate in the district is probably more liberal than he thought.” Mora points to Bernie Sanders’s performance in South Texas as evidence: Sanders won in almost every South Texas county, including Webb, Bexar, and Hidalgo.

Still, the mere existence of a viable primary challenger proved that Cuellar isn’t bulletproof. The challenge also allowed the litany of groups he’s pissed off over the years to air their grievances—most notably the labor unions Cuellar has often voted against. The Texas AFL-CIO endorsed Cisneros, the first time the labor federation openly opposed an incumbent in at least 25 years. Cuellar most recently drew the ire of unions—including members who live in his district—by voting against the PRO Act, a union-backed overhaul of the country’s labor laws. “When [San Antonio union members] saw the PRO Act vote, they were pissed,” said Montserrat Garibay, the Texas AFL-CIO secretary-treasurer. The state labor federation was part of a group of unions that pumped $350,000 into the district and carried out intensive canvassing in Bexar County. That, Garibay said, should be a clear message to Cuellar.

For her part, Cisneros made a promise to voters: “This is just the beginning.” South Texas, she still believes, is ready for something different. “The first thing we had to defeat was the culture of fear, and our movement was victorious in proving we’re within striking distance of bringing fundamental change to South Texas,” she said in a statement Wednesday morning.

Her campaign manager, Danny Diaz, lives in the Hidalgo County part of the district, and went to work for Cisneros after spending the 2018 cycle building up Cambio Texas, a group in the Rio Grande Valley that aims to mobilize young and unlikely Latinx voters who are constantly overlooked by the Democratic Party. He sees this campaign as a major stepping stone in an effort to shift away from the stale, conservative politics that have long dominated South Texas.

“I think that people have been yearning for this for a while, but nobody had stepped up and had the courage to do it,” Diaz said. “She took that big first step. It’s going to inspire a lot of young people to say, ‘I can do it, too.’”