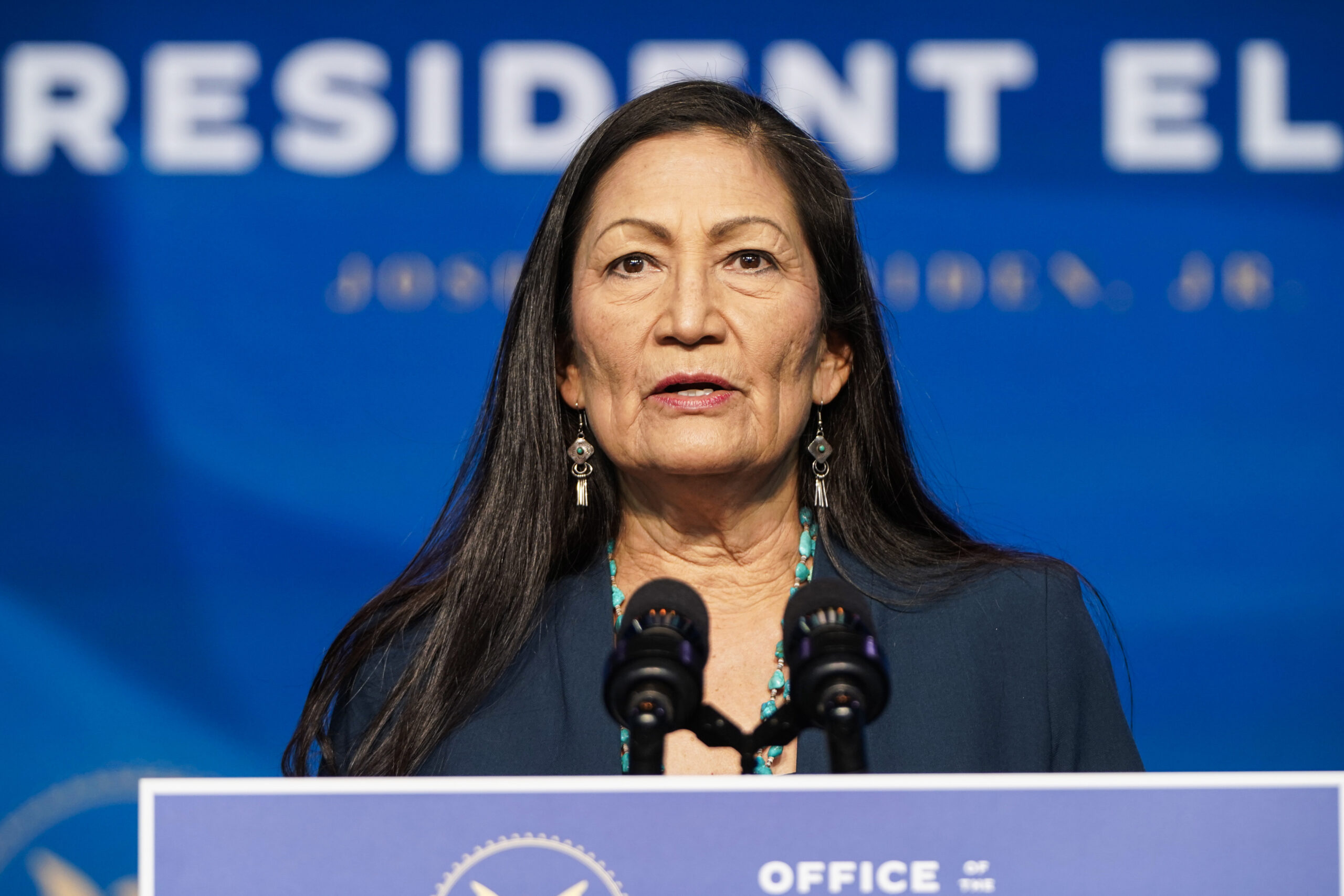 On a December Saturday, at a press conference broadcast from the city of Wilmington, in a state named for an English lord—Thomas West, the 12th Baron De La Warr, who rebuilt Jamestown in 1610 after a period of starvation and cannibalism and was appointed captain-general and governor for life of the Virginia colony—President-elect Joe Biden introduced his climate team of White House officials and cabinet secretaries.

Standing among the nominees was Representative Deb Haaland, of New Mexico and the Laguna Pueblo. In a speech describing climate change as “the existential threat of our time,” Biden was quick to acknowledge the significance of her presence. “After today, our cabinet won’t just make one or two precedent-breaking appointments but 12, including today’s long-overdue appointment of the first Native American cabinet secretary,” he said, looking over his shoulder at Haaland. “Welcome, welcome, welcome.”

“I’m proud to stand here on the ancestral homelands of the Lenape tribal nation,” Haaland began, recognizing a people whom colonists once also called the Delaware, now exiled to far-off reservations in Wisconsin, Oklahoma, and Ontario, Canada. “This moment is profound when we consider the fact that a former secretary of the interior once proclaimed his goal to ‘civilize or exterminate’ us,” she said, her eyes welling up and her voice quivering. “I’m a living testament to the failure of that horrific ideology. I also stand on the shoulders of my ancestors and all the people who have sacrificed so that I can be here.”

I’ve had a front-row seat following Haaland’s pathbreaking career. In 2018, this magazine assigned me to cover her campaign to win a seat in the House of Representatives. And on the first day of the 116th Congress, I had a standing-room spot in the lower chamber’s press gallery. I’ll never forget the image of Haaland, tearful as she hugged Sharice Davids, a Kansas representative and citizen of the Ho-Chunk Nation, after the two had been sworn in as our first Native American congresswomen.

How to Survive an Apocalypse and Keep Dreaming

In July, I added Haaland’s name to a fantasy-football-style list of progressive cabinet secretaries curated by Data for Progress, the lefty think tank where I work. Even though I’d watched her historic rise in politics, I honestly didn’t think much would come of it. Our list was, in truth, not particularly realistic. We named my representative, Barbara Lee, for defense secretary because she was the only legislator to vote against the Authorization for Use of Military Force after 9/11. We suggested Keith Ellison for attorney general because—well, wouldn’t that piss off all the right people? And as I recently joked to Haaland, we might as well have named the Lorax to head the Environmental Protection Agency.

I put Haaland on that list because she didn’t fit the profile of the industry-friendly former businessman, lifelong bureaucrat, or retiring Western politician usually appointed as interior secretary. She was a single mother who at times had relied on food stamps and struggled with homelessness. Her prior employment included stints as a cake decorator and small salsa-business entrepreneur. She started in politics as a volunteer organizer getting out the Native vote, and when she ran for Congress, she and her daughter were still paying off student loans. A Green New Deal cosponsor and Medicare for All supporter, she went to the camps erected in the path of the Dakota Access Pipeline in 2016 and cooked green chili stew and handmade tortillas for the families. She was never the establishment’s choice to lead a department that manages tribal affairs as well as the public lands and natural resources taken from First Peoples.

But her story was simply too good to deny. Even before Biden was elected, tribal leaders, environmentalists, and progressive activists believed Haaland would make a wonderful interior secretary because of who and what she stood for. We organized, strategized, researched, tweeted, memed, and did everything in our power to make that happen. Against the many objections raised to her candidacy—that she was too inexperienced or too liberal, that she wasn’t close enough to Biden, or that House Democrats couldn’t afford to lose her seat—the community and coalition behind Haaland would not be denied. And ultimately, even the Democrats’ shrewdest party bosses could not deny her either.

It’s often hard not to be cynical as a progressive, as an Indian, and especially as a progressive Indian. Much of this nation’s history was written by thwarting justice and killing Natives. Even in those brief moments when the oppressed and disenfranchised have finally begun to receive their due, the Indigenous have often been forgotten. Even in historian Jill Lepore’s masterly These Truths, for example, Native Americans appear just once after the year 1900.

With Haaland’s appointment, we have turned a page—not because the insiders wanted it, but because the people fought for it. “This historic moment will not go by without the acknowledgment of the many people who have believed in me over the years and had the confidence in me for this position,” Haaland said in her acceptance speech. “I’ll be fierce for all of us, for our planet and all of our protected land. I’m honored and ready to serve.”