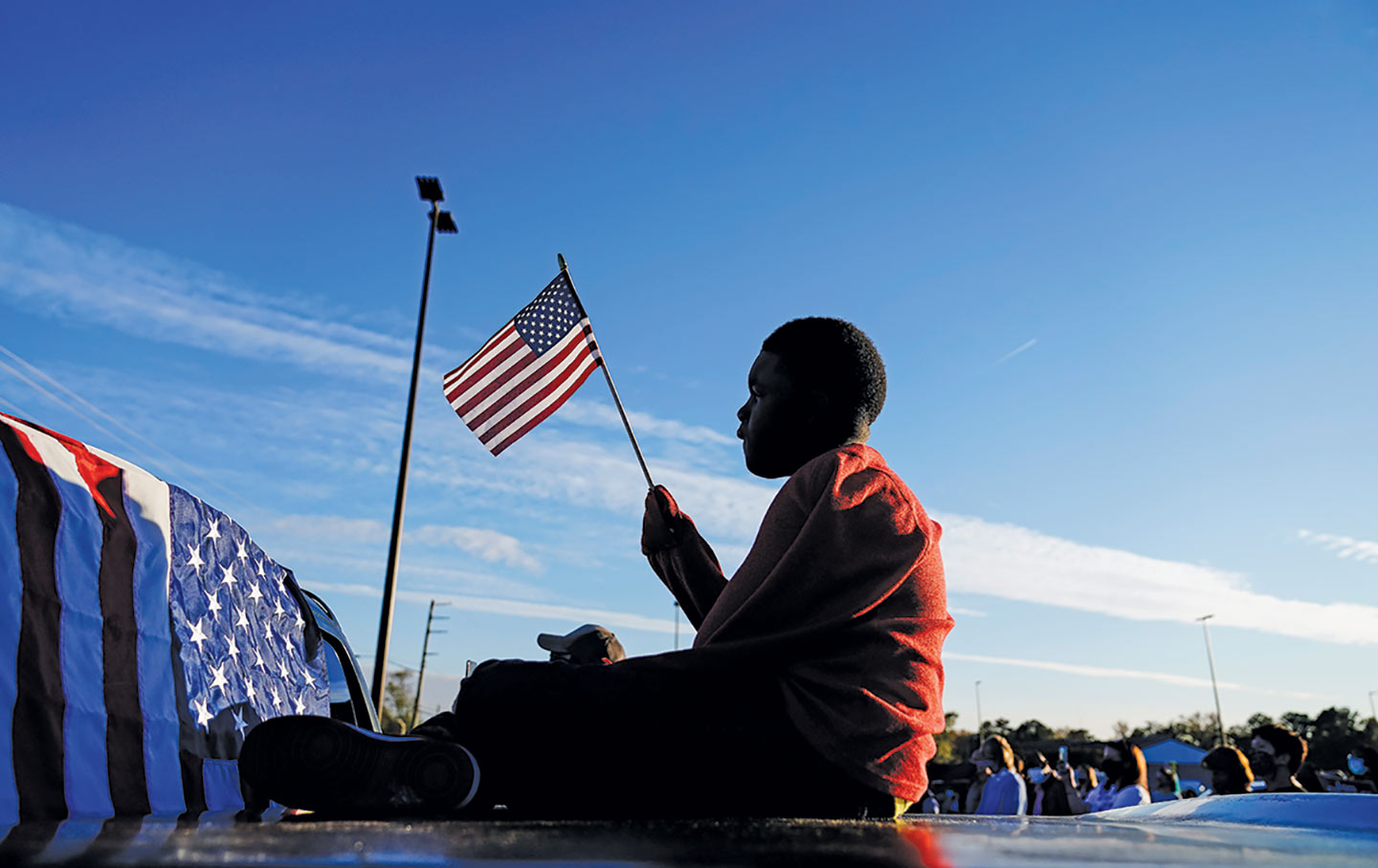 Hard-fought: Xavier Watts, 9, at a rally for Warnock and Ossoff in Marietta, Ga. (Brynn Anderson / AP)

The white supremacist attack on the US Capitol on January 6 temporarily obscured the titanic achievement of Georgia Democrats the night before: defeating right-wing Senators Kelly Loeffler and David Perdue in the state’s runoff elections, electing the Rev. Raphael Warnock and Jon Ossoff and giving Democrats control of the Senate, with Vice President Kamala Harris poised to break any 50-50 tie. (Take that, racists.) Progressives had no time to celebrate, though, and it was almost as if that were the point. Of course, the hard-won result in Georgia did not inspire the deadly and seditious riot; we know the violence had been planned in plain sight for weeks, if not months, on social media and elsewhere.

But certainly the victories, by a Black preacher and a Jewish documentary filmmaker, helped drive the racist mob and its leaders to an even more vicious frenzy. At his rally before the riot, which got him impeached for a historic second time, Donald Trump derided the Georgia results and told the angry crowd to head to the Capitol and “fight like hell.” Fighting back was “much more important today than it was 24 hours ago, because I spoke to David Perdue—what a great person—and Kelly Loeffler—two great people—but it was a setup,” he claimed, another allusion to his bogus charges that Joe Biden’s Georgia win and those of Warnock and Ossoff were illegitimate.

Trump is partly to blame for his party’s historic losses. In the run-up to the runoffs, Georgia Democrats did everything right, and the state’s Republicans did almost everything wrong. Meanwhile, Trump—on his way down history’s drain—did everyone dirty.

Let’s first give credit where it’s due: to former Georgia House minority leader Stacey Abrams, who narrowly lost the state’s governorship to Brian Kemp in 2018 and went on to form the voting rights groups Fair Fight and Fair Fight Action. Between lawsuits and voter organizing, the two groups made sure the state’s historic turnout in the general election didn’t crater for the runoff. A group Abrams previously founded, the New Georgia Project, has reached its maturity over the last several election cycles, with director Nsé Ufot working alongside a broad range of groups, from Black Voters Matter and Mijente to the Asian American Advocacy Fund, the Latino Victory Fund, and so many others. 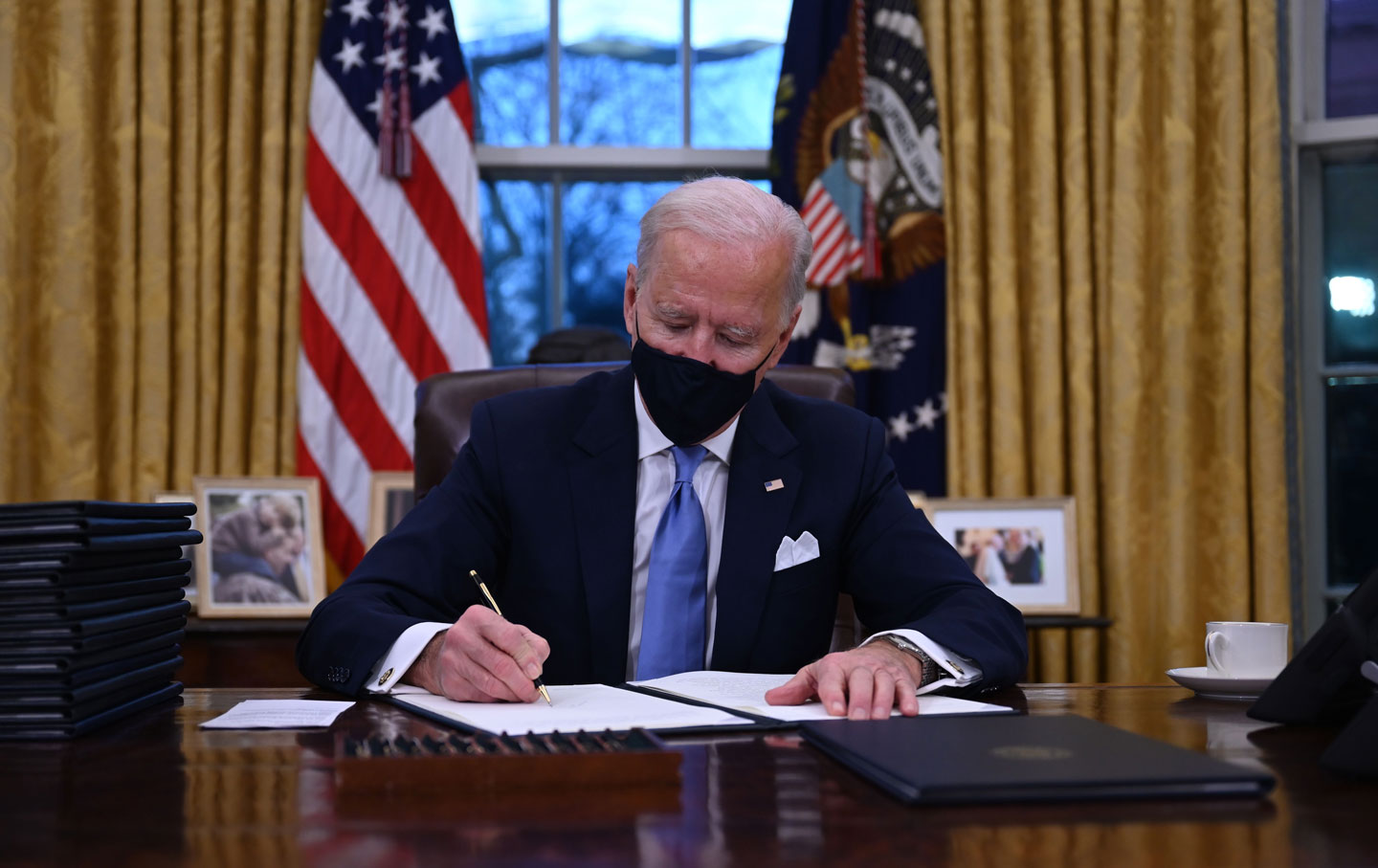 Georgia Democrats and progressive groups also got back “on the doors,” and it paid off. While the Covid crisis mostly shut down canvassing in the summer and fall, Democrats took it up again safely and energetically in the runoff. “Canvassing has been for a long time a strength of Democratic campaigns, but in 2020, and rightly so, Democrats put protecting people’s lives over the pursuit of power,” Abrams told me a few days before the Senate victories. “We’ve had aggressive mobilizing on the ground during the runoff.”

That mobilization featured paid organizers from Georgia’s diverse communities, with canvassers who spoke Spanish or one of a number of Asian languages (plus ads, social media, and literature in those languages). In the end, the percentage of Black voters who participated climbed since November, while according to Fair Fight Action, the Latino, Asian American, and Pacific Islander turnout dipped only slightly.

Perhaps most important, local organizers, with national legal backup, beat back dozens of efforts at voter suppression, both before and after the November election, by some conservative groups and local officials in dozens of counties. (Now state Republicans are pushing to repeal Georgia’s no-excuse absentee balloting—ironically, a GOP initiative once thought to help its candidates, especially in rural areas—and add a voter ID requirement to the absentee ballot process.)

Democrats also got an assist from Trump, who has spent much of his time since his loss trashing Kemp and Georgia’s secretary of state for not finding a way to sniff out nonexistent voter fraud and hand him the state. And while he appeared at a rally for Loeffler and Perdue on the eve of the runoff, Trump’s rambling speech attacked Georgia Republicans, harped on claims that the general election had been stolen, and by most accounts discouraged at least some of his base from turning out at all.

If the violent Capitol siege deprived Democrats of some joy over the Warnock and Ossoff wins, they are likely to feel plenty of it in the coming months as the pair help Biden confirm his cabinet appointees, enact a real plan to battle Covid, and pass a relief package. Trump has been impeached again, but the outcome of a Senate trial remains uncertain. It would certainly bend the arc of the moral universe toward justice if Georgia’s two new Democratic senators played a role in convicting the man who fomented a resurgence of racist and anti-Semitic terror.