Enrique Tarrio, leader of the Proud Boys, antagonizes a group of counterprotesters outside the February 2021 CPAC conference in Orlando, Florida. (Matthias Winsor)

rlando, la.—It would be easy to see the relative calm of Donald Trump’s post-insurrection career as an ignominious end to six years of MAGA. For those of us used to waking up every day for the past four years wondering what wreckage he left behind overnight—and then compulsively scrolling through Twitter to find out—it’s been tempting to regard Trump as a spent force. But the atmosphere outside the hotel here last weekend hosting the Conservative Political Action Conference (CPAC)—with demonstrators cavorting in cheerful defiance of Trump’s election defeat—gave a very different vision of that movement’s future. It didn’t take long for me to realize that these people have no plans of going away.1

I’d come to Orlando to interview MAGA supporters and get a taste of their plans following the unwelcome loss of the presidency. Few of them captured the tenor of the crowd better than Enrique Tarrio, the current chairman of the Proud Boys and one of the most controversial luminaries of the far right, whom I found slipping along the sidewalk with his own coterie of diehard supporters. To him, the reason everyone was out there braving the heat that afternoon was clear.2

“When you cross the street, you’re not seeing flags for Cruz. You’re not seeing flags for Rubio,” Tarrio told me, explaining that the Proud Boys had been present at demonstrations outside the Hyatt-Regency Hotel for the past two days. “So we’re here to show the people inside, including members of Congress, including members of the Senate, that the people are with Trump.”3

The Proud Boys—one of the two militia groups whose members I noticed at the demonstration that day; several flags for Three Percenters were also seen waving in the wind among the crowd—are an all-male neofascist group, prominent advocates of political violence and self-avowed defenders of “Western chauvinism.” They became notorious in the Trump era for their frequent street brawls with Black Lives Matter and anti-fascist protesters. At the September 2020 presidential debate with Joe Biden, Trump infamously told them to “stand back and stand by” in anticipation of election results, after being asked whether he would condemn them. They later became one of the groups charged with plotting the Capitol insurrection.4 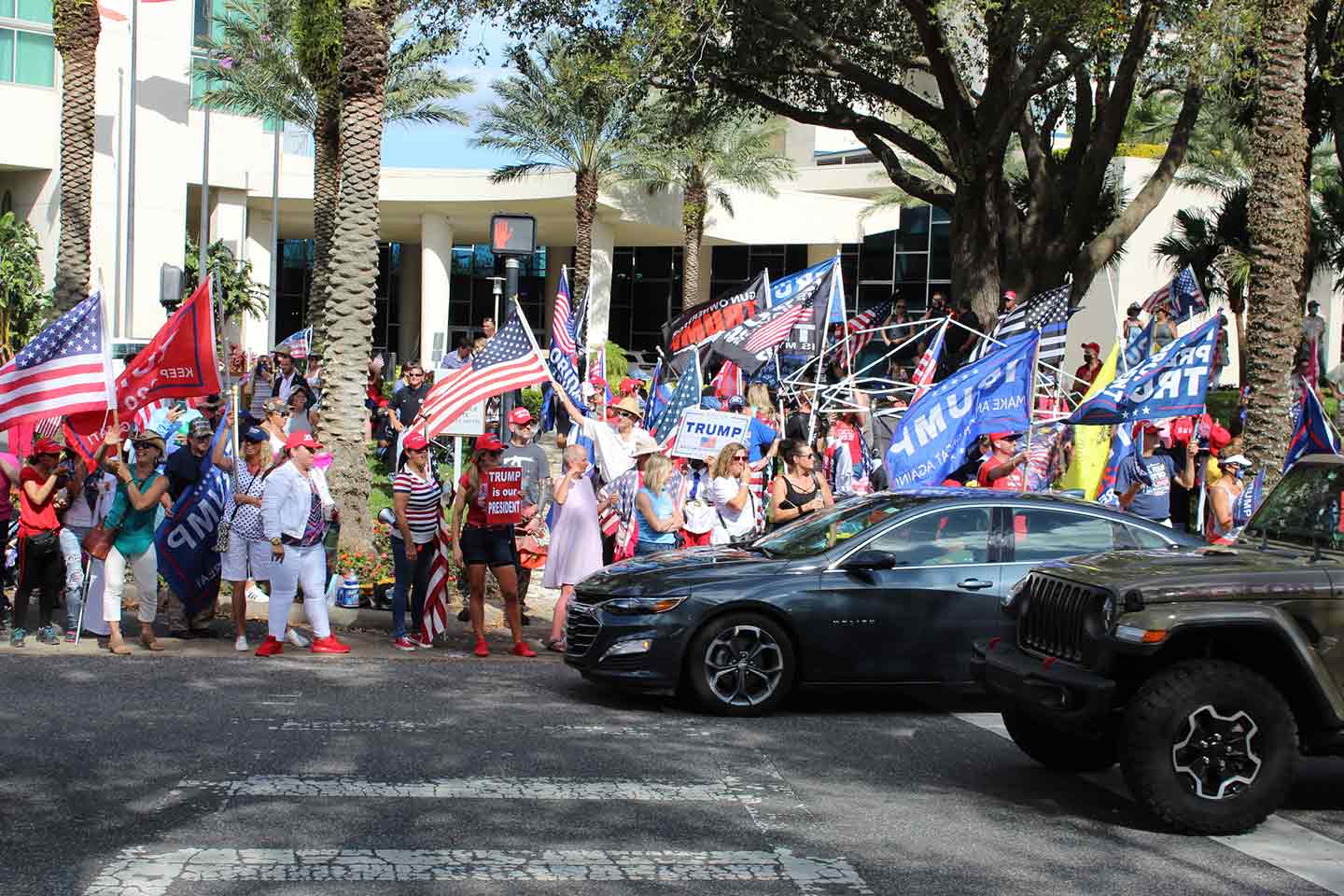 Pro-Trump demonstrators waved flags and shouted slogans in front of the Hyatt-Regency Hotel in Orlando awaiting the arrival of the former President for his first public speech since being voted out of office. (Matthias Winsor)

But on purely empirical grounds, it was hard to argue with Tarrio. The demonstrators I saw were there not for the Republican Party or the conservative movement. They came, above all, in a show of loyalty to Trump: not just Trump the politician, but the man, the figure, the cancel culture icon and martyr.5

“How often is it that you can have someone you believe in, and make a living off of it?” I was told by Justin, a seller of Trump and Blue Lives Matter merchandise who drove to Orlando all the way from Michigan, and who asked that his last name be excluded. “Now [under Biden], we gotta pay for other countries’ abortions.”6

“Trump is our president!” said one aging lady (who also asked not to be named) in a pink Trump shirt as her friend held aloft the Three Percenter flag. “That’s all I’ve got to say.”7

She promptly turned away from me, ending the conversation.8

The atmosphere outside CPAC seemed little different from Trump’s many campaign rallies, before and during his presidency. Crowds spilled over the grass along the sidewalk, setting up lawn-chairs and tents. They danced and chanted along to songs by Toby Keith and the Village People, and roared with applause when circling caravans of F-150 pickups flying Trump flags drove by, honking incessantly and revving their engines to a deafening pitch. Street-sellers at plastic tables hawked a gaudy buffet of MAGA paraphernalia: T-shirts saying “I survived college without becoming a liberal”; baseball caps with the Punisher logo in Blue Lives Matter colors; flags with Trump as Rambo holding a machine gun, or Smokey the Bear saying, “Only YOU can stop Socialism.”9

Trump remained irreplaceable in the eyes of most people present that afternoon. The only person mentioned consistently as a potential successor was Ron DeSantis, the current governor of Florida, who has become notorious for flagrantly dismissing the danger of the pandemic. But even here in his home state, that day has not yet arrived.10

“DeSantis is a good option,” Justin told me. “He doesn’t put up with shit. He’s kind of a gangster, in a good way.”11

“I like DeSantis; I love him,” said Tarrio. “I think he’s the best governor we’ve had. I just don’t think he’s ready for a 2024 presidential run. I’d like to see a DeSantis probably for a 2028 run. But I think there’s a lot of work left for him to do in Florida.”12

The leader of one of America’s foremost neofascist street gangs carries himself with a calm, self-assured swagger. He walks and talks in a slow, deliberate manner, exuding an aura of confidence he seems to have spent years cultivating. It’s easy to understand why so many disaffected twentysomething men are seduced into the ranks of his organization. I caught his attention by calling out to him in Spanish—Tarrio is an Afro-Cuban from South Florida, the son of refugees from Castro’s regime—after he’d sauntered across the road, where he’d gone to harass the dozen or so antifa counterprotesters who’d been setting up on a street corner opposite the MAGA crowd. He’d been complaining to another reporter about a gringo who called him racist.13

When I asked Tarrio why there was such a high proportion of Latinos out showing support in front of the hotel that afternoon—among several pro-Trump minority groups exhibiting an outsize presence at the demonstration—he simply said it was because they identified as Americans: “It’s not about being Latino,” he said. “It’s about being American. Latinos, in the way they live, are very conservative by their nature.”14

“There’s a huge bounty on your baseball cap,” one counterprotester with a Black Lives Matter mask told him before our conversation. Tarrio smirked back at him, saying nothing.15

He reminded me of a Latin American death squad leader from the 1980s—or Judge Holden in Blood Meridian, Cormac McCarthy’s novel of murderous bloodlust: straightforward, open, and unashamed in advocating for political violence. On his website, 1776.shop, sympathizers can buy shirts that say “Kyle Rittenhouse Did Nothing Wrong” and “Death to Commies” or advertise “Free Helicopter Rides” (referring to the practice among Latin America’s anti-communist dictatorships of dumping blindfolded leftists from helicopters over the sea).16

The gathering outside CPAC seemed, for many in the crowd, a kind of festive family outing—a party as much as a political act. “I’m just here for a good time,” I overheard one man with his kids say to a friend as they threaded the crowds in the sweltering heat past tables piled heavily with Trump baseball caps and shirts. (Perhaps it’s worth noting that, while few of the sweat-stained supporters lining the roads before the hotel were wearing masks, many of the Republican officials and media figures in suits and with CPAC credentials being ushered into the glass doors of the hotel were).17

Yet there were darker threads beneath the convivial atmosphere. The majority of demonstrators shared a grim, almost apocalyptic view of the future of America under Biden. Many also shared the belief that the president was a pawn of communist China.18

“China has a lot of power in the United States, economic power, currency manipulation,” Tarrio told me.19

Sharyl Caruso, a woman from Sarasota-Bradenton, Fla., stood among the crowds with a sign dedicated to Ashli Babbitt, the QAnon acolyte shot and killed by a federal officer while breaking down a door during the Capitol insurrection. She was convinced that antifa had infiltrated, and played a part in executing, the invasion of Congress.20 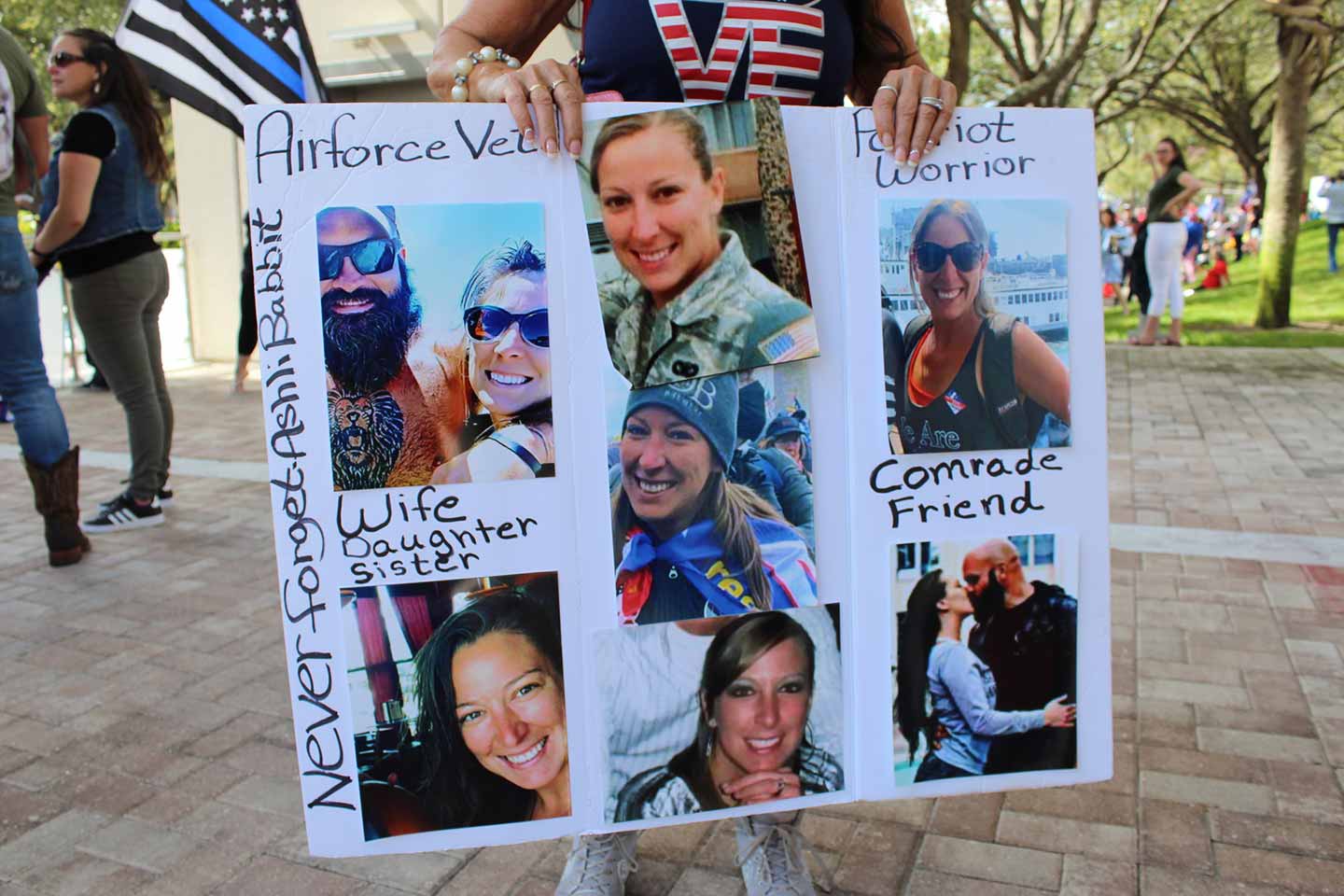 Sharyl Caruso displays her handmade poster memorializing Ashli Babbitt, who was killed by the Capitol Police during the January 6 invasion of the Capitol. (Matthias Winsor)

“I have personal friends who were at the insurrection who documented antifa,” she said. “There were paid insiders. [George] Soros is a very big person who is connected to these kinds of infiltrators who commit violence against the right.”21

Tarrio himself conceded that the protesters at the insurrection were from the far right. But he believes there were infiltrators who egged them on: “I think there was [sic] provocateurs,” he said. “Maybe not like some ‘deep state’ plot. But I know there were some provocateurs, and the majority of those people went in. They fell for the trap.”22

Followed by beefy men with Proud Boy insignia on their sleeves livestreaming the proceedings with selfie-sticks, Tarrio parked himself on the curb in the center of the antifa counterprotesters. He set his megaphone to make a siren noise and casually aimed it back over his shoulder. The leader of the counterprotesters shouted through his own megaphone: “The leader of the Proud Boys, a fascist gang, has come to Orlando!” he yelled, as the sound of a fire engine wailed past. “On a scale of one to 10, how much did you like being in jail?”23

When I asked Tarrio about the media portrayal of the Proud Boys as a violent extremist group, he smiled, and didn’t bother to disagree. “The problem is that there’s not that many myths,” he told me matter-of-factly, shrugging. “A lot of the stories are true.”24

Tarrio had been arrested two days before the insurrection in Washington, D.C., charged with possession of two-high capacity rifle magazines; reportedly, the FBI had developed intelligence he was helping to plan some kind of violent disruption. On January 27, Reuters revealed that he’d been a “prolific” undercover informant for federal investigators following his 2012 arrest.25 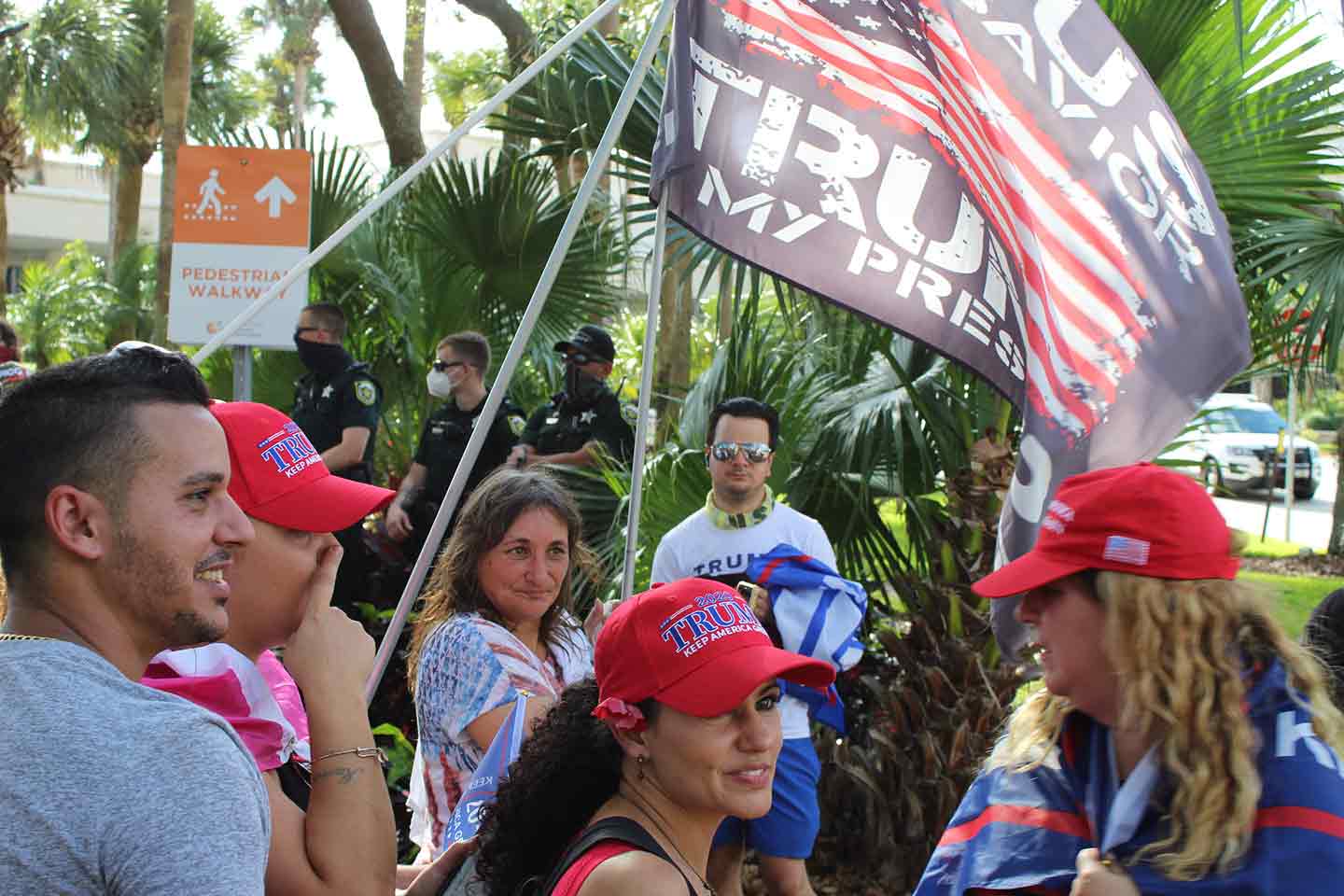 With an hour still to wait before Trump’s arrival the late afternoon sun began fading to bronze. Fifty or so members of “Blacks for Trump” swarmed across the street to join Tarrio, pushing their way into the crowd. A line of police officers swung in as the pushing and shoving began. There was a chorus of yelling, mixing with the revving of truck engines and shouts of more demonstrators from the MAGA gathering.26

Tarrio stepped back, took in the scene, and swallowed a gulp of water. “This is my turf!” he shouted, pointing at the ground. And then he smiled a grin of pure satisfaction.27