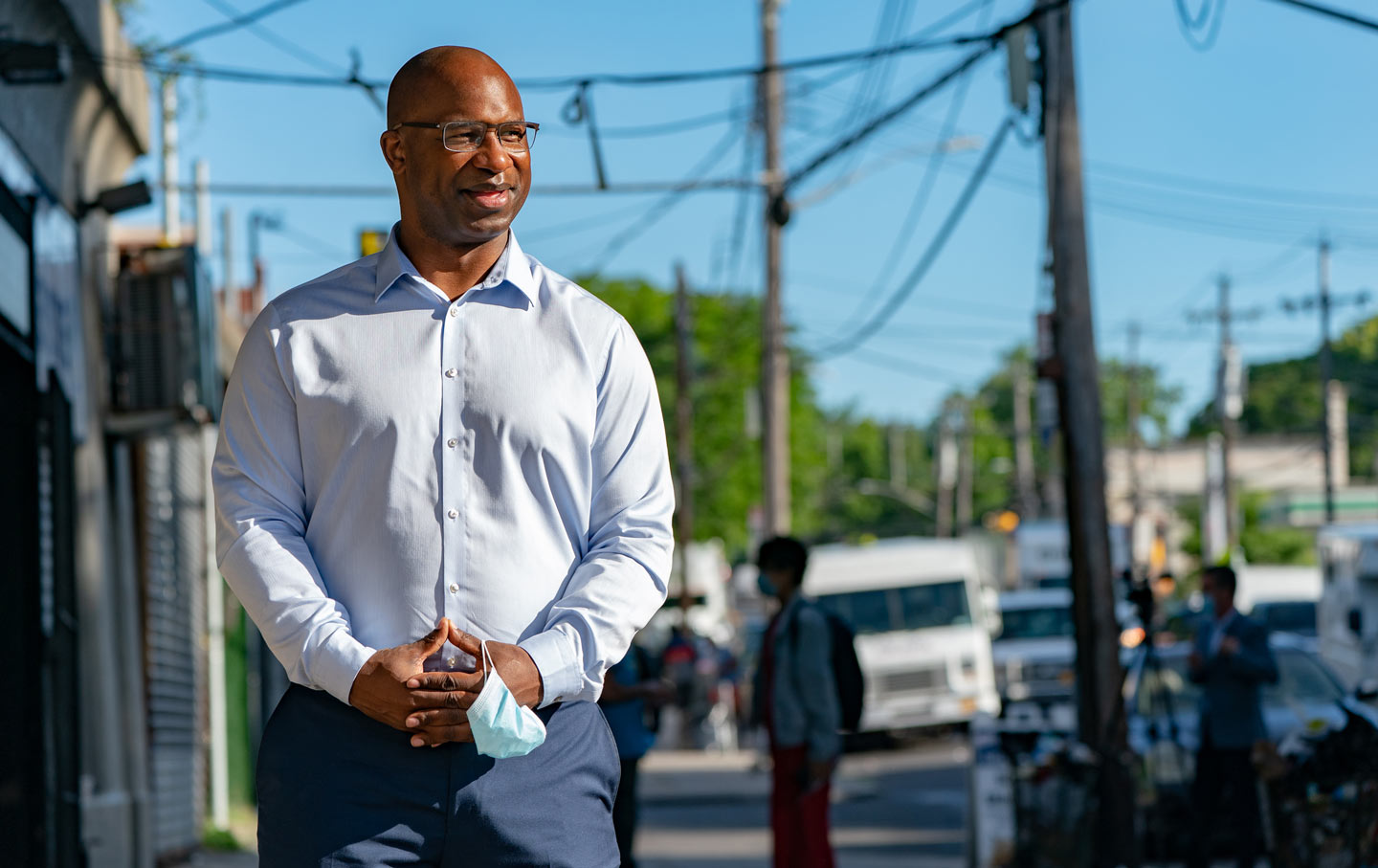 Vital Democratic primaries, many of them with national consequences, will take place next on Tuesday, June 23. Nation Justice Correspondent Elie Mystal and National Affairs Correspondent John Nichols have identified a handful of races that they’re keeping their eyes on in New York and Kentucky—two states that delayed their primary elections because of the pandemic. Here’s a roundup of seven candidates Mystal and Nichols think are making noteworthy runs.

Charles Booker, US Senate candidate, Kentucky
“Don’t you tell me Kentucky isn’t ready for change,” says US Senate candidate Charles Booker, a 35-year-old legislator who represents a predominantly African American district in Louisville, as he travels the country roads of rural Kentucky. Booker has gained a lot of notice for joining #BlackLivesMatter marchers in his hometown, but he has also stood with out-of-work miners in coal country. Challenging the D.C.–insider pick in the Democratic primary, retired Marine fighter pilot Amy McGrath, Booker has built a movement campaign around the argument that only a multiracial, multiethnic coalition that champions economic, social, and racial justice can beat the most powerful man in Washington: Mitch McConnell. He’s persuaded the largest newspapers in the state, both of which have endorsed his candidacy, as well as folks in Eastern Kentucky towns like Prestonsburg—population 3,255—where he recently rallied with a crowd that chanted, “From the hood to the holler!” “They say the arc of the moral universe bends toward justice,” explains Booker. “Well, we are bending it in real time.”

Jamaal Bowman, House of Representatives candidate, NY–16
Eliot Engel is the US Representative for the 16th district of New York, the district where I live, and I wasn’t going to vote for him in the primary even before he was caught on a hot mic saying that he only cared about speaking at a Black Lives Matter rally because he had a primary. That’s because the challenger forcing Engel to pretend to care, Jamaal Bowman, earned my vote before Engel told the truth about himself. Bowman is a former middle school principal and made racial and social justice key to his congressional campaign long before George Floyd was murdered.

That couldn’t be more important in my majority-minority district, which has stunning wealth and school inequality between the largely white parts and the largely minority areas. I live in the “white” part of town. Bowman is committed to extending the suburban charm (and services) enjoyed by my area across the district. And he pledges to make it a little bit safer for my two children to ride their bikes while black around their own neighborhood.

Jabari Brisport, New York State Senate, District 25
“Politicians have made cut after cut to our safety net, while the rich have gotten richer and refused to pay their fair share of taxes,” declares middle school math teacher Jabari Brisport, who is mounting a “people over profits” campaign for an open state Senate seat representing Bedford-Stuyvesant, Fort Greene, Prospect Heights, Clinton Hill, and other Brooklyn neighborhoods. He’s one of a number of candidates backed by Democratic Socialists of America in the June 23 Democratic primaries for New York City legislative seats, and he brings a class-conscious sensibility to all the issues of the moment. Regarding criminal justice reform, Brisport says, “As a socialist, I believe that people should not have to endure the violence and coercion of a carceral system that props up the exploitation of the market by surveilling, caging, and killing those fighting to survive under capitalism.” In response to Covid-19, he reminds voters that the coronavirus “has shown just how long there’s been a crisis for working-class New Yorkers.” These perspectives are going to be needed in the next state legislature, as is Brisport’s broader recognition of “the importance of getting those who believe in a post-capitalist world to have legislative influence.”

Mondaire Jones, House of Representatives candidate, NY–17
The primary for NY–17 is loaded with quality candidates running for a seat that hasn’t been open since the 1980s. But Mondaire Jones stands out from the crowded field. If gold-plated résumés are your thing, Jones has got it: Stanford undergrad, Harvard Law School, and time working at one of the most respected law firms in the country, Davis Polk & Wardwell. But he left that high-paying job to take a post in Barack Obama’s Justice Department, and then came back home to the district where he was born and raised to work in the public sector at the Westchester County Law Department. Jones is a progressive who supports Medicare for All and the Green New Deal. If elected, he’d be the first openly gay, African American member of Congress.

Again, there are tons of candidates in this race, some with high name recognition, some with personal wealth, some with establishment ties to Albany and beyond. Combined spending in this primary race has already topped $7 million. Out of that crowd, it’s Jones who has snagged the endorsements of people like Alexandria Ocasio-Cortez, Bernie Sanders, and Elizabeth Warren. And he still calls the newly renamed “Mario Cuomo Bridge” the “Tappan Zee Bridge,” which is the kind of thing you do when you are a local who will not let Albany put words in your mouth.

Nima Kulkarni, Kentucky House of Representatives candidate, District 40
Two years ago, Louisville immigration lawyer Nima Kulkarni challenged a senior Democrat in the Kentucky legislature in a party primary because, she said, “fundamental democratic principles and institutions are under attack, and we need Democrats willing to show up and fight for them.” Kulkarni won, and she has since shown up for immigrant rights and public education, criminal justice reform, and repeal of the state’s anti-labor “right-to-work” law. This spring, she’s campaigning for reelection, against a primary challenge from the ex-legislator she beat in 2018. But Kulkarni’s thinking about more than the next election. She just joined a working group on extending civilian oversight of the Louisville Metro Police in the aftermath of the Breonna Taylor shooting. And she’s challenging racism and xenophobia in the way that legislators across the country should. “The only way that we can get through this is by working together, for each other and the most vulnerable among us,” argues Kulkarni, whose family immigrated from India to Louisville. “Our president can only think to divide us and make us distrust each other. It is a tactic that has been historically successful, but we do not have to repeat that history.”

Yuh-Line Niou, New York State Assembly candidate, District 65
Zephyr Teachout says that “one of the biggest priorities in [New York State’s June 23 Democratic primary] election” is reelecting State Assembly member Yuh-Line Niou. The two-term legislator has also earned enthusiastic support from Representative Ocasio-Cortez, New York Public Advocate Jumaane Williams, City Comptroller Scott Stringer, Senators Sanders and Warren, the Working Families Party, and a long list of unions and community organizations in the Lower Manhattan district where Niou says she is “working on building a movement in the State by bringing our community together to fight for transparency, accessibility, and accountability in our government.” Niou faces a well-funded primary challenger this year. But this energetic and engaged legislator has fought hard to protect immigrants, workers, and struggling small-business owners in a district that includes Chinatown, the Financial District, Battery Park City, and the Lower East Side. And she has earned high marks in recent months as an official who has been in the forefront of fights to freeze rent for tenants who’ve lost income during the Covid-19 pandemic, and to advance the demands for police accountability that have been raised in protests since the death of George Floyd.

Mimi Rocah, district attorney candidate, Westchester County
The murder of George Floyd has raised awareness about systemic bias, brutality, and violence in local policing. Progressive voters are more willing than ever to support leaders who promise to address police misconduct. But most voters are looking in the wrong place. Police reform will not come from the White House, and it won’t really come from Congress. Local officials have the most impact on policing. The county district attorney can hold police accountable for murder or other crimes they commit—or let them get away with it.

In Westchester, there is a contested district attorney primary. Former federal prosecutor Mimi Rocah is running a progressive challenge against longtime DA Anthony Scarpino. The primary takes place against a backdrop of police scandal: A whistle-blower recently came forward with recordings that he claims show corruption in the local police—one cop even admitted to planting drug evidence on suspects. The current DA has known about this evidence for a year and done nothing. Rocah pledges to do better.

If you care about holding the police accountable, if you’re in it for the structural reform and not just to get your steps in on the Fitbit, you have to care about your local district attorney, the only person who can put a cop in jail. There is a good one running in my town, and she can win. Find the good DA candidates running in your areas, and if there isn’t one, demand better options next cycle.