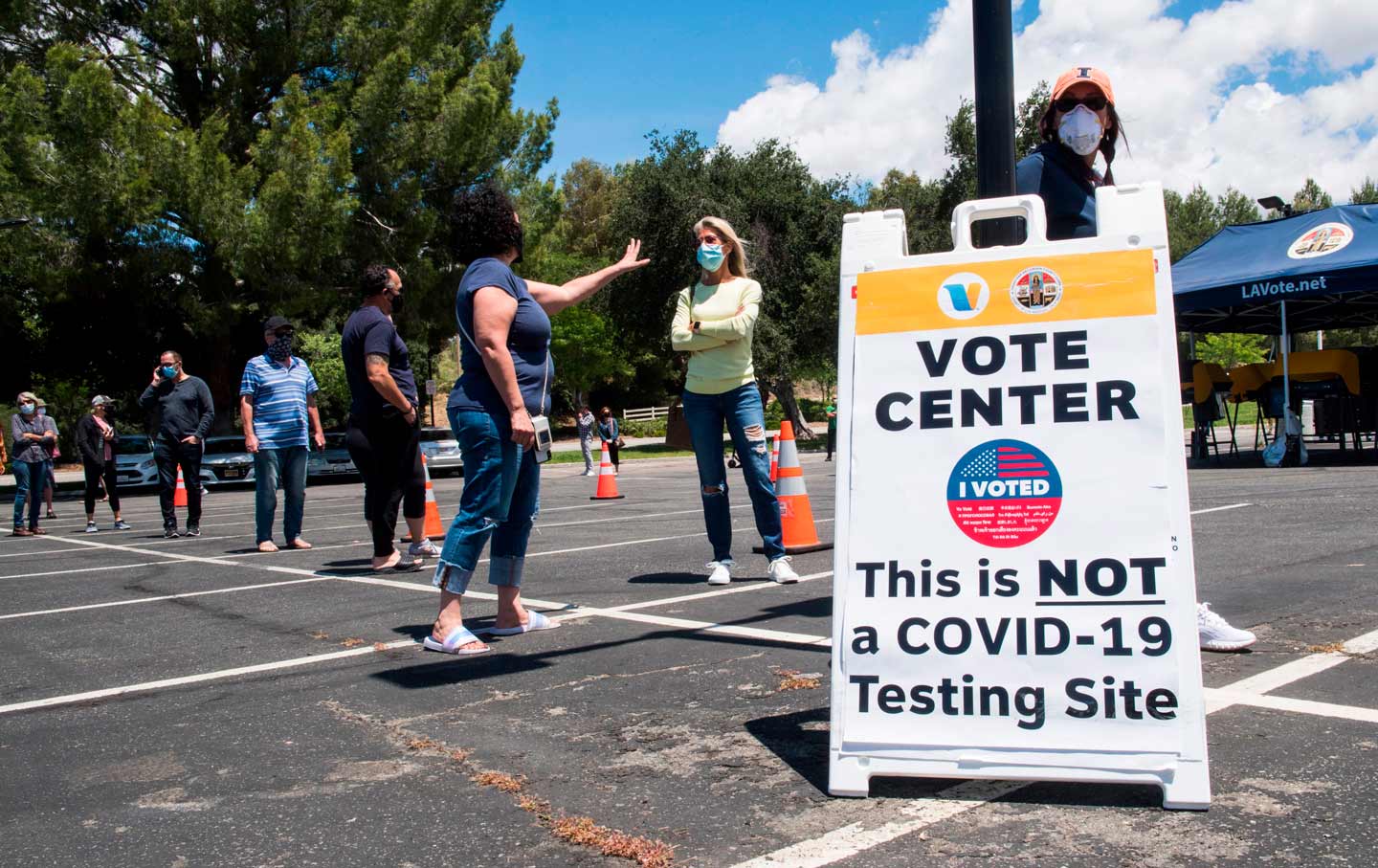 Like many Americans, Joe Biden is skeptical about President Trump’s respect for democracy. “Mark my words: I think he is gonna try to kick back the election somehow, come up with some rationale why it can’t be held,” Biden said at an online fundraiser in late April. He’s right to worry but wrong about how Trump’s inclination toward voter suppression will manifest itself this fall. It would take an act of Congress—including the Democratic-controlled House—to upend the federal law that requires general elections be held on the first Tuesday after the first Monday in November.

But that does not mean Trump won’t try to mess with the elections, in which, polls suggest, he and Republican Senate candidates are now vulnerable. This president thrives on chaos and fear, and the Covid-19 pandemic has created plenty of both. The virus that led 16 states to postpone primaries this spring could resurface in time to disrupt the November elections. In many states, that disruption could depress turnout—a prospect that seems to appeal to Trump, who recently complained that if voting was made easy, “You’d never have a Republican elected in this country again.” How far might Trump and his minions go? After Republicans blocked efforts to organize safe and fair Wisconsin elections on April 7, state Democratic Party chair Ben Wikler warned of a GOP that “remorselessly weaponizes courts, election laws, and the coronavirus itself to disenfranchise the voters who stand in its way.”

Democrats can act now to avert chaotic, low-turnout fall elections. Stacey Abrams, the 2018 Georgia gubernatorial candidate who now leads the voting rights group Fair Fight, says, “No. 1, we have to have vote-by-mail.” Building on existing vote-by-mail and absentee ballot rules, she says, “We simply have to scale it so that every state can execute it at the level necessary for a country in crisis, and that is doable.” Abrams proposes a “toolbox” approach, in which states make voting by mail available to all, along with safer early and in-person voting. But the time to scale it up is running out, and hard-pressed state and local governments don’t have the necessary resources. The National Vote at Home Institute calculates that 42 states would need “infrastructural changes” to make voting by mail a readily available option. “Can we expand the vote-by-mail system? Absolutely,” Amber McReynolds, the group’s CEO told BuzzFeed News in April. “But if this drags on for weeks and decisions are slow, it’s not possible.”

To get the $4 billion the Brennan Center says states need to pay for equipment, postal fees, and necessary changes to guarantee “safe and sanitary in-person voting,” urgent federal action is required. Trump’s resistance to funding the Postal Service and vote-by-mail initiatives can be overcome if congressional Democrats play hardball in stimulus negotiations. Democracy advocates must tell House Democrats that funding for safe and fair elections cannot be compromised away. 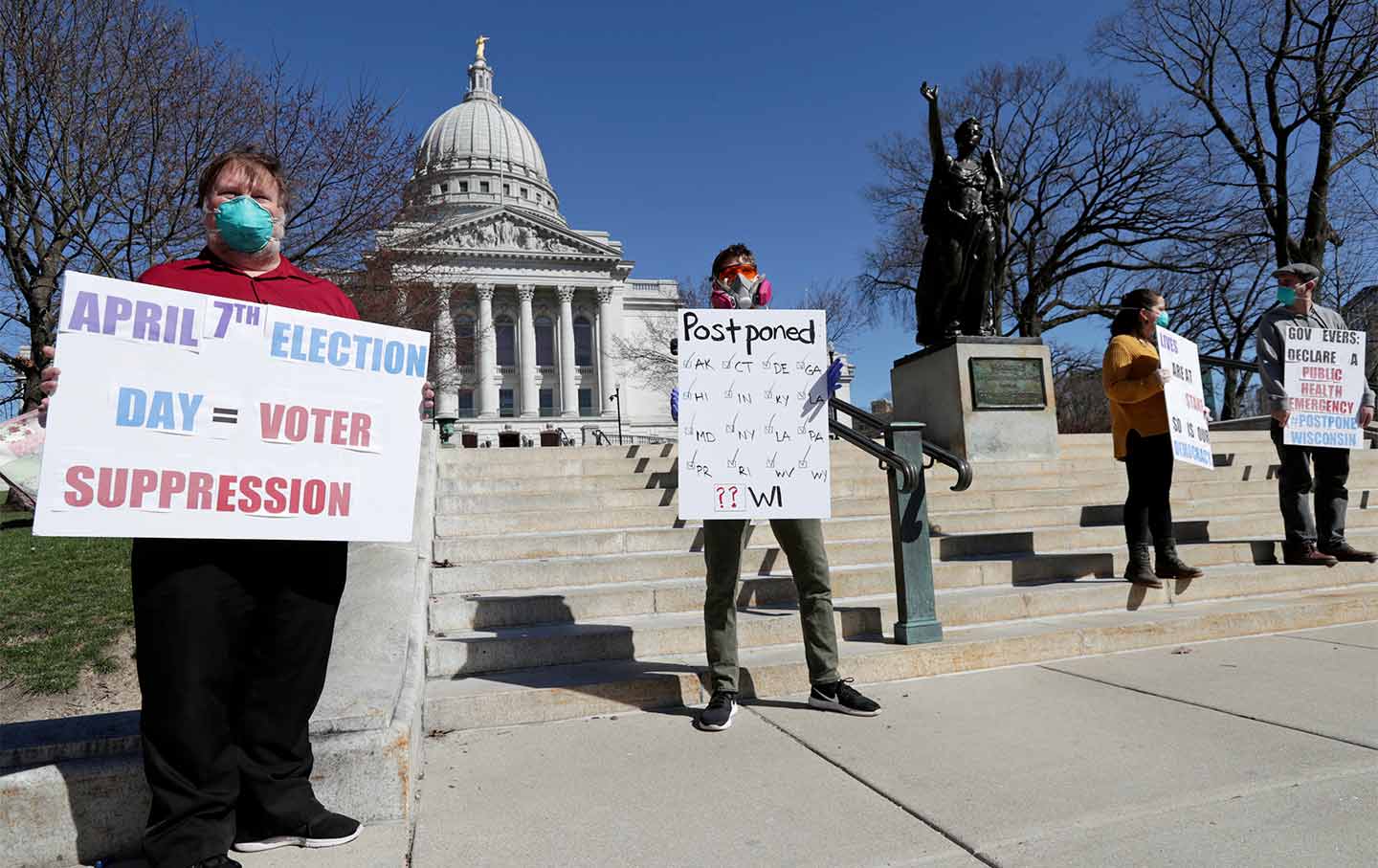 Advocacy also has to ramp up in the states. On May 8, California Governor Gavin Newsom signed an executive order that every registered voter in that state be mailed a ballot before the November elections. All other Democratic governors and sensible Republicans should be encouraged to do the same.

In states where Trump-aligned Republicans erect barriers to statewide action, there’s a local option. Prodded by the Working Families Party and voting-rights advocates, the Milwaukee Common Council voted unanimously in late April to create a SafeVote program that will send absentee ballot applications and postage-paid return envelopes to roughly 300,000 registered voters in the city. “The COVID-19 pandemic has shown us that nothing is truly certain at the moment,” council member Marina Dimitrijevic told the Milwaukee Journal Sentinel, “but with SafeVote we can make certain that all registered voters in Milwaukee can easily apply for an absentee ballot for the historic and pivotal election this fall.” That certainty must be demanded for all voters in all states this November.