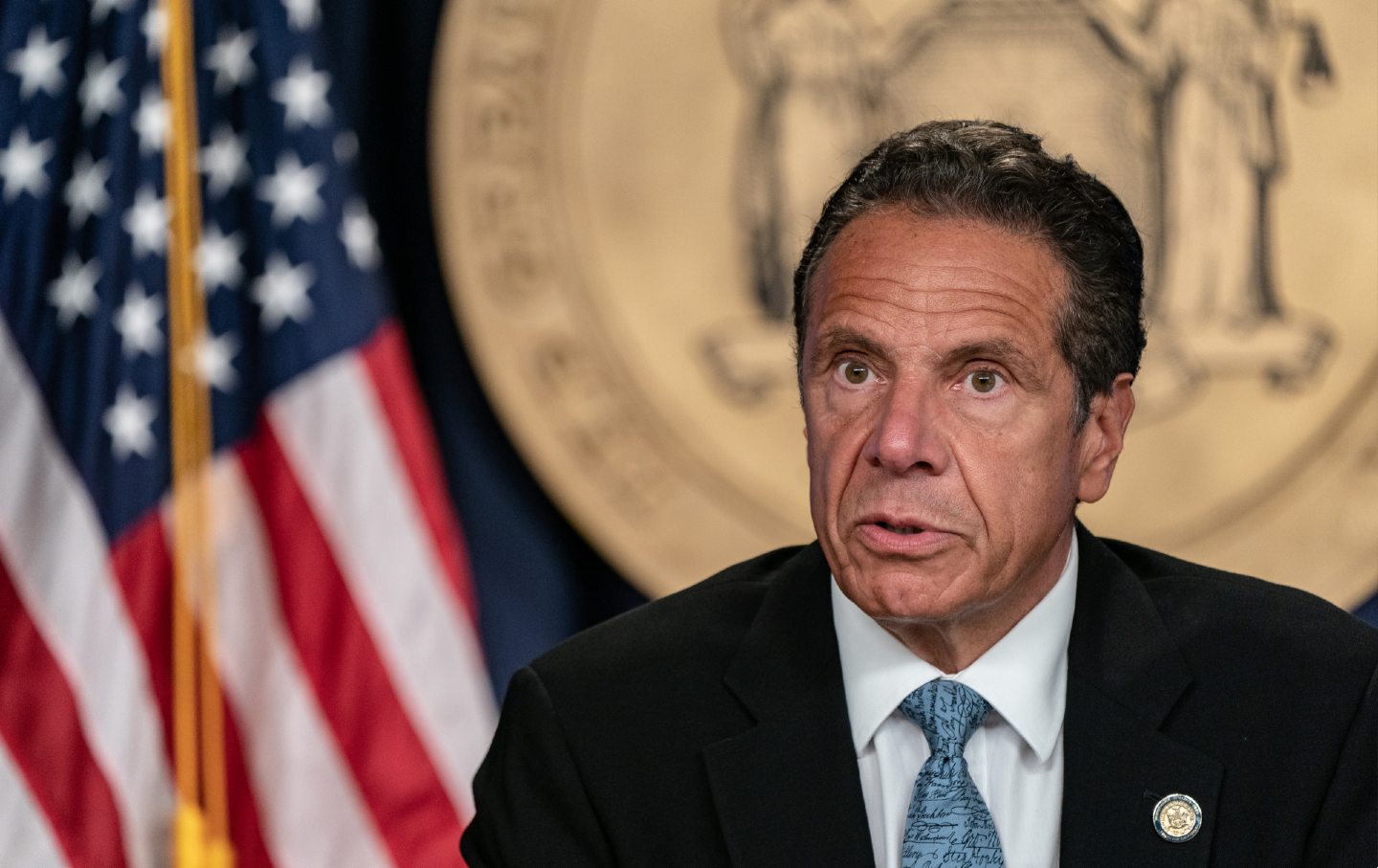 Less than a year ago, New York Governor Andrew Cuomo was touted as the golden boy of American politics. Amid the terror of the initial outbreak of the Covid pandemic, Cuomo’s seeming hands-on competence and commanding presence was often contrasted with Trump’s clownishness. Cuomo’s press conferences and regular appearances on CNN, where he was frequently interviewed by brother Chris Cuomo, exuded confidence and toughness. There was talk that the Democrats would be wise to replace Joe Biden on the presidential ticket with the self-assured governor. Cuomo even had the unbridled chutzpah to write a book offering leadership lessons he learned during the pandemic—as if he were the Winston Churchill of virus-fighting.

Yet even at the height of his alleged Covid triumph, Cuomo had a few naysayers, particularly among the New York press that had long been aware of his heavy-handed, authoritarian governing style. Writing in The Nation on August 10, 2020, Ross Barkan detailed Cuomo’s mishandling of the nursing homes file during the pandemic. Barkan documented how the Cuomo administration worked diligently to give nursing homes and hospitals blanket immunity from lawsuits, while systematically undercounting nursing home deaths. The Cuomo administration had also sent Covid patients to nursing homes, thereby accelerating the spread of the disease. In January 2021, CNN reported on a finding by the state attorney general’s office that the New York State Department of Health “undercounted Covid-19 deaths among nursing home residents by approximately 50%.”

Concurrent with the nursing home scandals, Cuomo has been fending off multiple sexual harassment allegations. On Monday, The New York Times reported the story of Anna Ruch, who claims she was subjected to unwanted advances from Cuomo during a 2019 wedding. The newspaper added that “Ms. Ruch’s account comes after two former aides accused Mr. Cuomo of sexual harassment in the workplace, plunging his third term into turmoil as the governor’s defenders and Mr. Cuomo himself strain to explain his behavior.” The earliest of these allegations was made in December 2020.

In the wake of these revelations, there’s been a rising chorus calling for Cuomo to resign, including from six state legislators and the Working Families Party. Washington Post columnist Helaine Olen points out that this dynamic is likely to get worse for Cuomo as victims of his toxic political style smell blood in the water.

“Cuomo governs in a take-no-prisoners, control-freak style,” Olen observes. “For the past decade, the governor has bullied and threatened Democrats and Republicans alike, not to mention political appointees. When a political commission studying state corruption appeared to come too close to Cuomo’s inner circle, he shut it down. He threatened to put the progressive Working Families Party out of business if they ran a candidate against him in 2018.” The Working Families Party is only one of many political actors that will use this moment for payback.

Olen concludes that “Cuomo is now discovering, bullies have few real friends but many enemies. Once someone successfully challenges them, it can all come apart.” Confirming this judgement, a high-ranking Democrat told Ross Barkan, “You can’t make three enemies a week for 10 years and hope to survive.”

But not all of Cuomo’s erstwhile political allies will abandon him. New York Times columnist Michelle Goldberg highlights the fact that “among many Democrats, there’s tremendous bitterness toward those who pressured Al Franken to leave the Senate in 2018 after he was accused of grabbing several women’s butts.”

many Democrats are sick of holding themselves to a set of standards that Republicans feel no need to try to meet. Twitter is full of people demanding that the party not ‘Franken’ Cuomo, and pointing out that Republicans are taking no steps to investigate alleged sexual harassers in their own ranks, including the freshman congressman Madison Cawthorn. At a certain point, making sacrifices to demonstrate virtue, in the face of an opposition that has none, makes a lot of Democrats feel like suckers.

The attitude Goldberg describes leads Ryan Cooper of The Week to conclude, “The #MeToo movement is running aground on the rocks of Democratic political convenience.”

My Nation colleague Alexis Grenell has called attention to the fact that New York Senator Kirsten Gillibrand, who has taken a feminist stand on other occasions such as the Franken case, has been reluctant to criticize Cuomo. “When it comes to taking on Cuomo, though, Gillibrand can’t seem to find the courage, claiming ‘It’s not my job,’ and failing to even mention the governor by name except to remind everyone of his due-process right,” Grenell notes. “No mention of the women either, not even to praise their ‘bravery,’ as politicians who don’t know quite what to say typically do.”

Democrats have a legitimate concern over the political double standard that exists. It is frustrating that Republicans will grant unlimited immunity to repellent figures like Donald Trump or Madison Cawthorn. But it’s still better to have a double standard on these issues than no standards at all.

It’s dismal enough that the Republicans under Trump have effectively adopted a tribal credo that makes their leaders immune from scrutiny. But to have both major political parties forswearing accountability would be an even bigger disaster, putting the entire political class above norms and laws.

A system of asymmetric accountability can be costly to politicians like Cuomo, but they benefit the Democratic Party as a whole. If Democrats can hold their leaders to basic norms, they can turn their superiority to Republicans on that count into an electoral advantage. Although this might not persuade all voters, it will carry force with some, and thus—if voters who care about such matters are sufficiently numerous—become a competitive advantage. But in order to make the claim that they are the more ethical party, Democrats have to first clean house, starting with Cuomo.