Demonstrators outside of 1214 Dean Street. (Courtesy of Equality for Flatbush)

“This is very lovely,” Imani Henry said, stepping out of the gate at 1214 Dean Street in Brooklyn. Though it was past midnight, a crowd of over 30 remained of those who had gathered that night to defend the tenants of the building, in the Crown Heights neighborhood, against an illegal eviction. “A typical part of our lives is illegal lockouts,” said Henry, the founder of Equality for Flatbush (E4F), the anti-gentrification and anti-police-brutality organization that initially sent out a call to action. For most New York City tenants, the most they can do in that situation is make a call to 311, the city’s government services line, and hope to be connected with a housing lawyer. But that night was unusual. Within three hours, almost 100 people assembled outside the house, demanding that the tenants be allowed to stay in their homes. Even after a season under the threat of the coronavirus and a month of racial justice uprisings, this felt new—and, as one person at the blockade put it, like “the start of a long summer.”

During the Great Depression, neighborhood eviction defenses like the one at 1214 Dean Street were common and organized. In the century since, blockades have popped up now and then in cities across the country. The Los Angeles Tenants Union reversed a lockout in May. But as the few protections tenants have been granted during the pandemic expire, as many as 23 million renters are at risk of eviction in the next few months. And in the six weeks since the LATU blockade succeeded, millions of people have taken to the streets in anger at state racism, among other things, to little response from the government. The combination of frustration and desperation took concrete form as a neighborhood turned its focus on a pair of gentrifying white landlords and the mostly black, mostly female, queer, and trans tenants they were trying to evict.

Xander Roos, a member of the Legal Aid Society’s housing unit, left his nearby apartment as soon as he got an e-mail about the action via the Crown Heights Tenant Union listserv at 4:54 pm. He was one of the first people at 1214 Dean, arriving a little after 5 pm. He informed the landlord—Gennaro Brooks-Church, who owns the building with his ex-wife, Loretta Gendville—that it was illegal to evict anyone in New York state without due process. There were no marshals present, the tenants hadn’t been served with papers, and courts were closed for new eviction cases. Brooks-Church responded that it was not an eviction, and on social media, Gendville said the same thing; they were just getting rid of some bug-infested furniture.

As the crowd assembled, tenants told a different story: After months of threats and harassment, Brooks-Church and Gendville had shown up unannounced, children in tow, to threaten them, barging into the rooms of young tenants. Brooks-Church, a middle-aged white man, took over an empty room and spent the night. Gendville laid hands on the tenants, misgendered them, and told her teenage daughter they were squatters. Gendville removed the building’s Wi-Fi, telling the tenants they would get it back if they told her when they would move out. Someone’s mattress and other belongings had been taken away in a U-Haul, and more furniture had been put out on the street.

After a few hours of standing around, watching as Brooks-Church walked in and out of the house, people were ready for more than booing and hissing. They went diving on their phones and surfaced with dirt. The house, which was zoned for one to three units and listed on tax records as containing one, had been illegally subdivided, and Brooks-Church had left handwritten signs warning tenants not to let anyone from the City enter. Unearthed were embarrassing quotes from interviews in The New York Times, past troubles with the law, negative Yelp reviews of the landlords’ businesses, and scathing descriptions of their assets: In addition to a few more rental properties in low-income neighborhoods in Brooklyn, Gendville owns a local chain of yuppie children’s stores, yoga studios, and an infrared sauna. 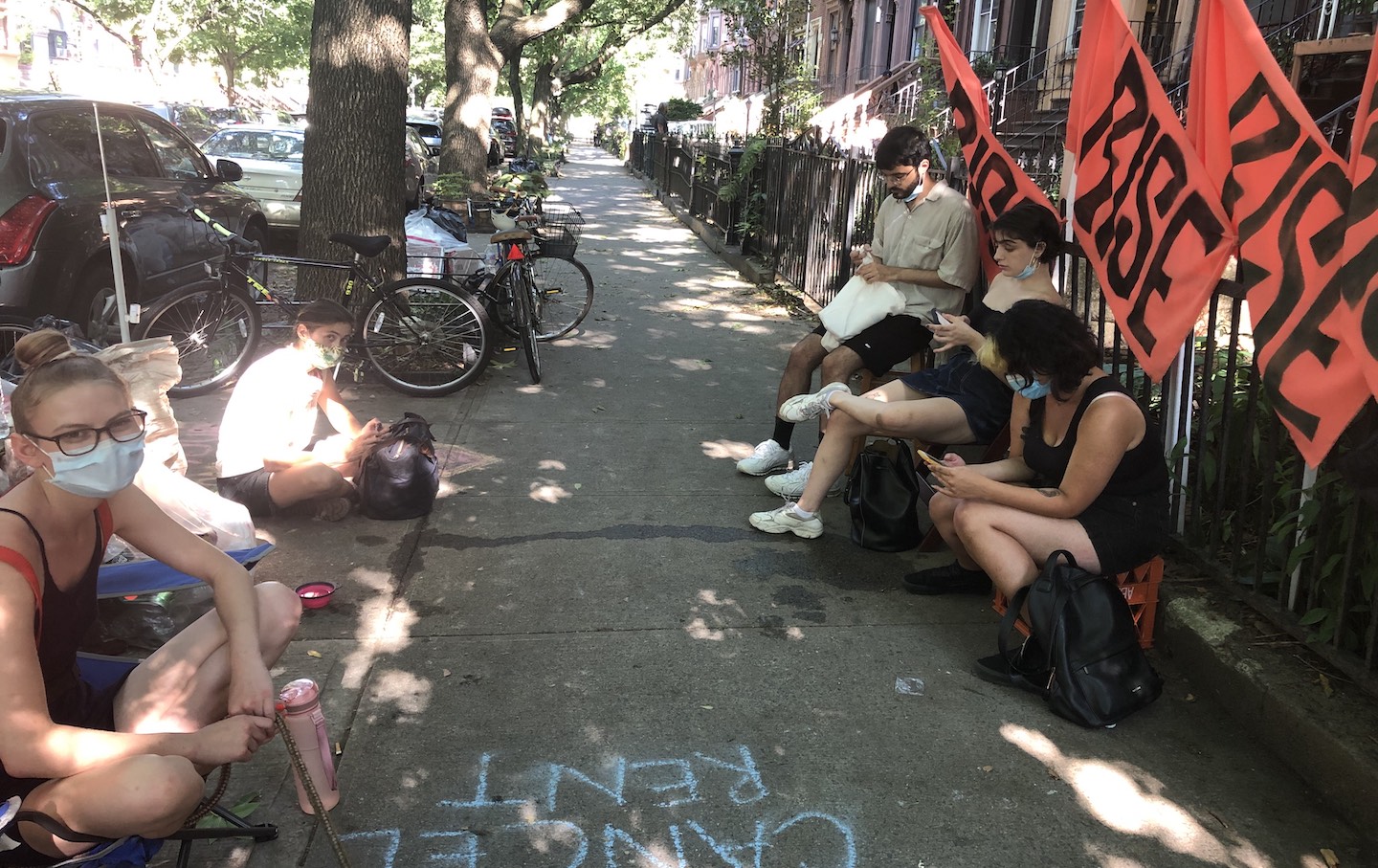 Demonstrators outside of 1214 Dean Street. (Photo by Danni Inman)

People—other neighbors, tenants, and organizers—took up a megaphone. Unsure of where to focus attention amid the chaos and worry, the crowd ended up relying on one person, Danni Inman, a young local resident with long braids from a couple of blocks away. (Inman uses “they” pronouns.) Like many others, they went to the blockade after seeing it on Instagram. “I just came out to show support,” they told me. “I’d been here two hours when they asked me to speak, and then I started speaking, and then at some point, I was in charge.” After consulting with tenants and the other de facto organizers, they told the protesters to go inside, first through the gate and up the stoop and eventually inside the house, where Brooks-Church was skulking.

Around 8:20 pm, the police showed up, apparently responding to Brooks-Church’s call. The crowd’s anger was instantly redirected. The chants of the past month soon turned into new ones as two officers went inside the building unmasked: “No landlords, no cops! All evictions have to stop!” Roos, acting as a go-between, reported that although the cops agreed the tenants had a right to stay, they wouldn’t make Brooks-Church leave—even though he was there illegally (unless it’s an emergency, landlords have to give tenants reasonable notice of at least a day before entering their home), he’d attempted to lock tenants out (a misdemeanor offense), and there were tenant allegations of assault.

“We’ve just been shown that police don’t protect us. They protect property,” Inman told the crowd. “We’re seeing that right now in action.” As the police van left, the organizers directed the protesters to go inside. It’s legal if “it’s a party,” Inman said. “The tenants have invited us inside their home.” And the protesters were reminded, over and over again, “Do not touch the landlord.” The crowd entered, and to everyone’s surprise, Brooks-Church went out onto the porch. People turned around, facing him and linking arms to keep him out of the house. He eventually retreated to his SUV and drove off.

The mood was jubilant. Even when someone took the megaphone to remind the demonstrators that this was only the beginning, that it would be a wearying summer of eviction and harassment, the crowd only seemed energized. “If we have this many people—even after the [eviction] moratorium is lifted—really good eviction defenses, the police do eventually leave,” an organizer with the Crown Heights Tenant Union said, optimistic about tenants’ chances in the coming months even as she acknowledged that larger landlords would be harder to fight. The closest comparison to the shared elation was in recent memory: the feeling, during a Black Lives Matter demonstration, when protesters would force the police back or deface a police van, a momentary return of power to the people. As the protests grew less confrontational, that energy faded, although the conditions and frustrations that underlie them remained the same. The success of the blockade restored that hope. As Inman pointed out, “Black homes matter.” Fighting for Black housing is fighting for Black lives.

“I founded Equality for Flatbush because we’ve had six people shot by [New York police] since 2012, just in our little hood of Flatbush, Crown Heights, Bed-Stuy,” Henry told me. Part of that effort involves anti-gentrification activism, which often means eviction defenses; he had recognized someone at the blockade from another eviction defense in Bedford-Stuyvesant. Henry is 51 and gentle-voiced, with long roots in local activism. His experience was welcome in an overwhelmingly young crowd. As he said, “It’s clear they’re preying on younger people.”

After Gendville tried to forcibly enter the room of a tenant who was recovering from brain surgery, the person contacted E4F, which sent the e-mail to the Crown Heights Tenant Union and began posting on social media. “Our thing is public shaming. Police and landlords, developers have no shame, so just shame them. That’s been our strategy,” Henry said. As he spoke, dozens of people behind him were texting their friends, posting on Twitter, and alerting their Instagram followers to the landlords’ other businesses. 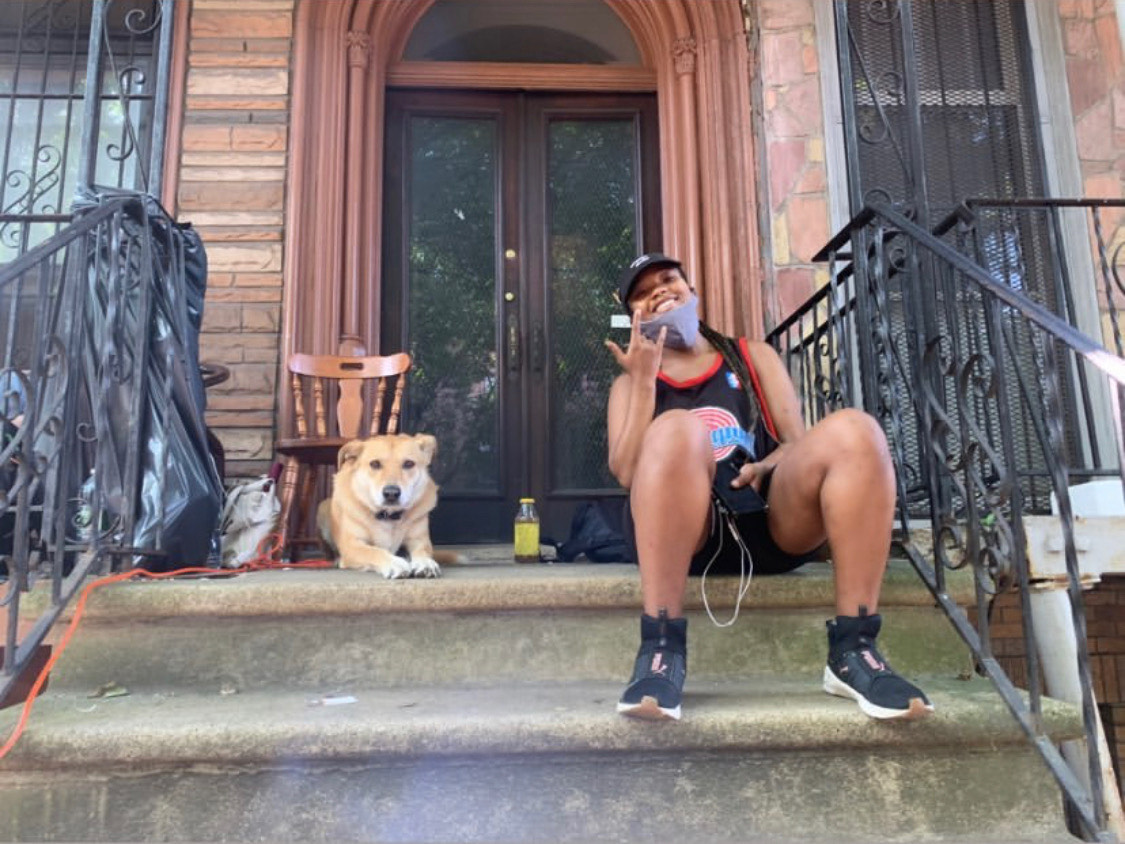 Inman left a little after midnight, citing exhaustion and the need to prepare for a job interview the next morning. (Like many people there, they had been laid off at the beginning of the pandemic.) Someone led one more chant, quietly: “We love you, Danni.” A couple left and returned with coffee. Someone else left and returned with cups. Pizza eventually materialized, along with snacks, cigarettes, and beer. Looking over cases of water bottles, Henry mentioned wanting something sweet to drink. Within 15 minutes, someone arrived with a tote bag full of cold Gatorades. Henry peered into the bag with delight and said, “I can’t stand Gatorade, but I’m going to have one.” By 2 am, dozens of people remained, spread out over the sidewalk and stoop, quietly chatting and smoking.

Nobody from the landlords’ team returned the next day. It had rained a little overnight and kept drizzling throughout the day, but nobody seemed to notice. (A pile of donated umbrellas went largely unused.) The blockade had turned into a mutual aid station and a cafeteria, with a canopy set up in an empty parking spot over a few chairs and three tables loaded with food. The furniture the landlords had thrown on the street had been rearranged and repurposed, with a sofa propped by the building door for potential use as a barricade. There was a medical shelf with first-aid supplies, cloth and disposable masks, hand sanitizer, and a diligent restocker.

Police brutality and the behavior of the landlords were connected in the minds of many of the protesters. Em, an E4F activist, said, “The whole moment that we’re in, calling for abolition of police and prisons and [Immigration and Customs Enforcement], is tying into this right now. We’re recognizing this wouldn’t happen if we weren’t in this shitty system where landlords can do shit like this and they can rely on cops who brutalize and kill us.”

A recent sit-in at New York’s City Hall intended to pressure elected officials to make significant cuts to the New York Police Department budget was an escalation from peaceful marches, but it failed. The leaders at 1214 Dean Street learned from that demonstration that demanding help from politicians doesn’t get much better results than asking nicely. State protection from displacement and gentrification would never come fast enough to prevent it from happening. Over and over again, the crowd asked on Tuesday, “Who keeps us safe? Who fights for us?” As the cops arrived and left and Brooks-Church returned home, the answer was clear. “We keep us safe. We fight for us.” Whereas relying on scattered neighborhood assemblies to defend tenants from rich landlords and armed policemen might have seemed impossible a few months ago, at 1214 Dean Street, a mass of angry and frustrated people came together to do just that.

I asked Inman if they saw themselves taking a more active role in community activism in the future. “Oh, absolutely,” they said. But first, “I’ll be here tomorrow and the next day and the next day if I have to.”