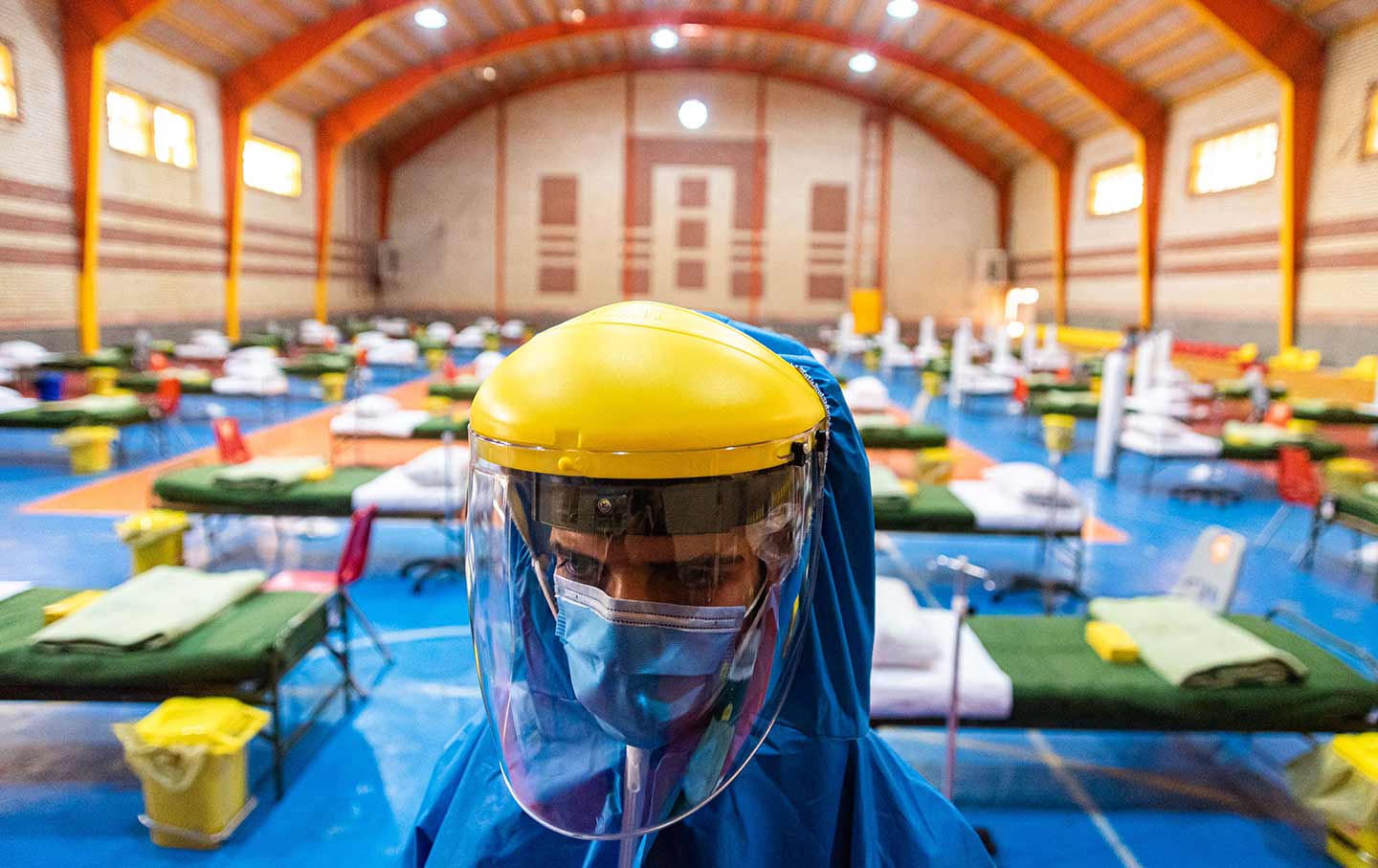 A field hospital set up in a sports hall in Tabriz, Iran. (Anadolu Agency via Getty Images)

The Covid-19 pandemic raises serious questions as to the efficacy and morality of the Trump administration’s sanctions on Iran. Iran, which as of this writing has nearly 78,000 coronavirus cases and just under 5,000 deaths, ranks among those countries hardest hit by the pandemic. Over the course of the past few weeks, the Trump administration, guided in these areas by unreconstructed hard-liners like Secretary of State Mike Pompeo, Defense Secretary Mark Esper, and Treasury Secretary Steven Mnuchin, has doubled down on its regime change strategy toward Iran.

On March 18, with the pandemic raging, Pompeo announced a further round of sanctions against Iran. “Our sanctions,” said Pompeo, “will deprive the regime of critical income from its petrochemical industry and further Iran’s economic and diplomatic isolation.”

A few weeks later, in a sickeningly cynical comment on April 2, President Trump seemingly made light of the growing humanitarian crisis in Iran, declaring that “the Iranian [people] love America. I think they’d love to be free.… They love what we stand for…. if they need help with respect to the virus, we have the greatest medical professionals in the world. We’d love to send them over.”

Not content with doubling down on sanctions and preventing much-needed supplies from third-party countries from entering Iran, the State Department went a step further on April 6 when it published a fact sheet on what it describes as “Iran’s Sanctions Relief Scam,” which alleges that efforts by the Iranian government to secure relief for its citizens is really nothing more than a ploy to raise cash in order to fund its malign national security prerogatives. According to the department’s fact sheet, “Iran’s slick foreign influence campaign to obtain sanctions relief is not intended for the relief or health of the Iranian people but to raise funds for its terror operations.” 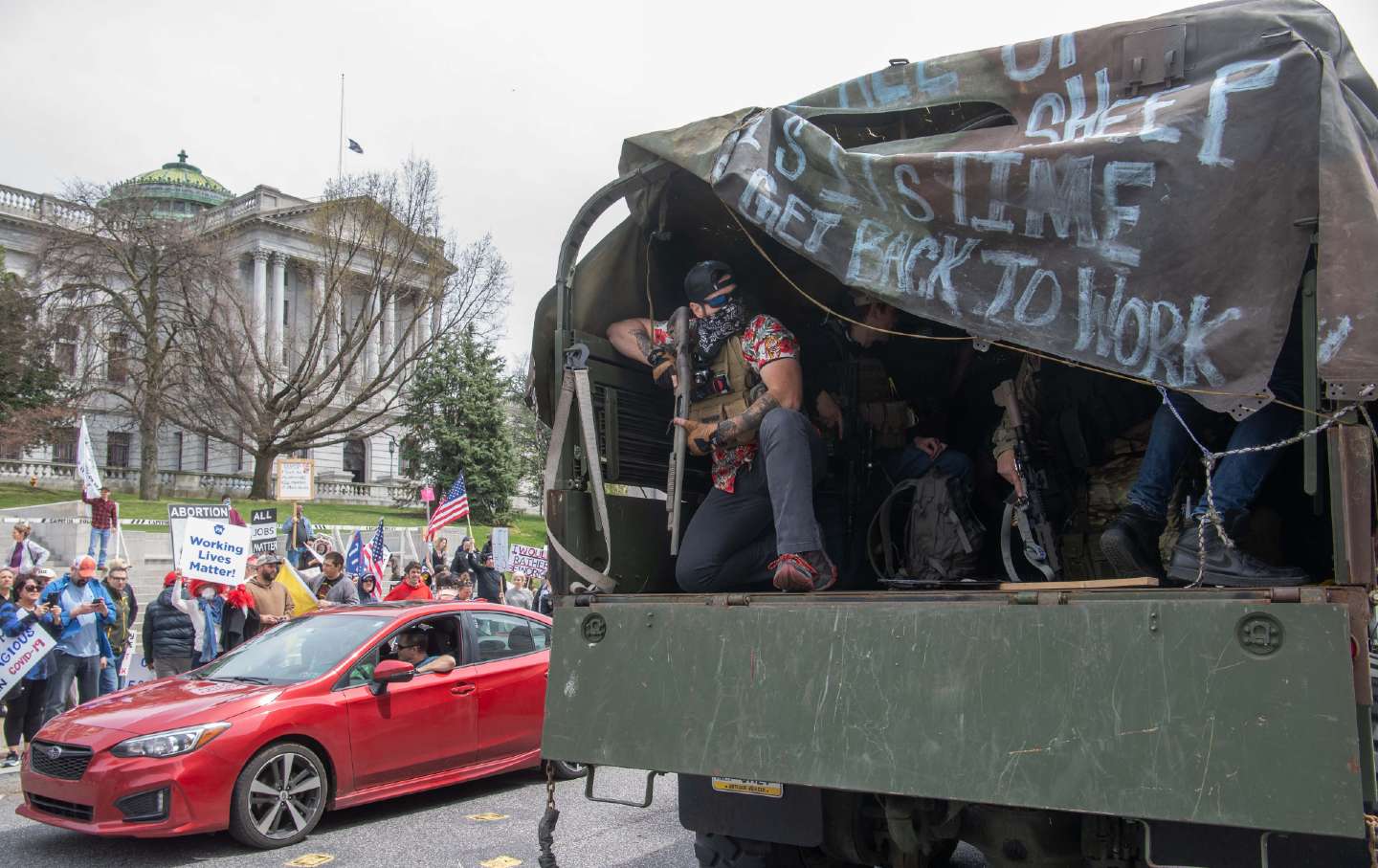 The cruelty of the current policy has given rise to a debate among Democrats in Congress. Powerful hawks like disgraced New Jersey Senator Robert “Bob” Menendez and Elliot Engel of New York have teamed up to ask the president not to precipitately lift sanctions, because, they fear, “simply lifting sanctions…will not provide immediate or meaningful relief for the Iranian people.” Meantime, progressives, including Bernie Sanders and representatives Ilhan Omar and Alexandria Ocasio-Cortez have called on the administration to lift sanctions on major sectors of the Iranian economy, including “civilian industries, Iran’s banking sector and exports of oil.” Moderates in the Senate, including Tim Kaine and Ben Cardin, signed a letter to Mnuchin calling for a 90-day waiver on sectoral sanctions that interfere with humanitarian relief and an easing of logistical, financial, and technological restrictions that currently impede Iran’s fight against the virus.

And where is Joe Biden in all of this? On April 2, Biden released a letter that seemed to support the idea of lifting sanctions—if only for the duration of the crisis. Biden wrote, “Whatever our profound differences with the Iranian government, we should support the Iranian people.” Yet nowhere in Biden’s statement did he actually call for the lifting of sanctions. His position echoed the Menendez-Engel line that the Trump administration’s sanctions already have humanitarian exceptions in place. In an interview with NBC’s Chuck Todd on Sunday, Biden declined to say whether he would even agree to lift sanctions temporarily, because, in his view, the regime was likely “lying” about the scope of the crisis there. Thus far, Biden’s response only confirms well-founded concerns that he has surrounded himself with among the most hawkish of Obama’s foreign policy alumni and that we may not see real, substantive changes in US foreign policy if he wins in November.

Meantime, a coalition of grassroots organizations and activists are calling for an end to the current sanctions policy. The Center for Citizens Initiatives posted an open letter calling for an end to all US sanctions. Likewise, CodePink and online activists using the hashtag #EndCOVIDSanctions have joined the call. Even members-in-good-standing of the US foreign policy establishment have weighed in. Writing in The Washington Post, Philip H. Gordon, who served as Middle East coordinator for Obama’s national security council, and the scholar Ariane M. Tabatabai criticized the administration’s campaign of so-called “maximum pressure” on Tehran and warned that such a policy “will more likely lead to many more Iranian deaths [and] further the spread of the virus to Iran’s neighbors.”

Civic and religious leaders across the globe have also raised their objections to ongoing US policy. On Easter Sunday, Pope Francis said sanctions “make it difficult for countries on which they have been imposed to provide adequate support to their citizens.” “This,” said Francis, “is not a time for indifference, because the whole world is suffering and needs to be united in facing the pandemic.”