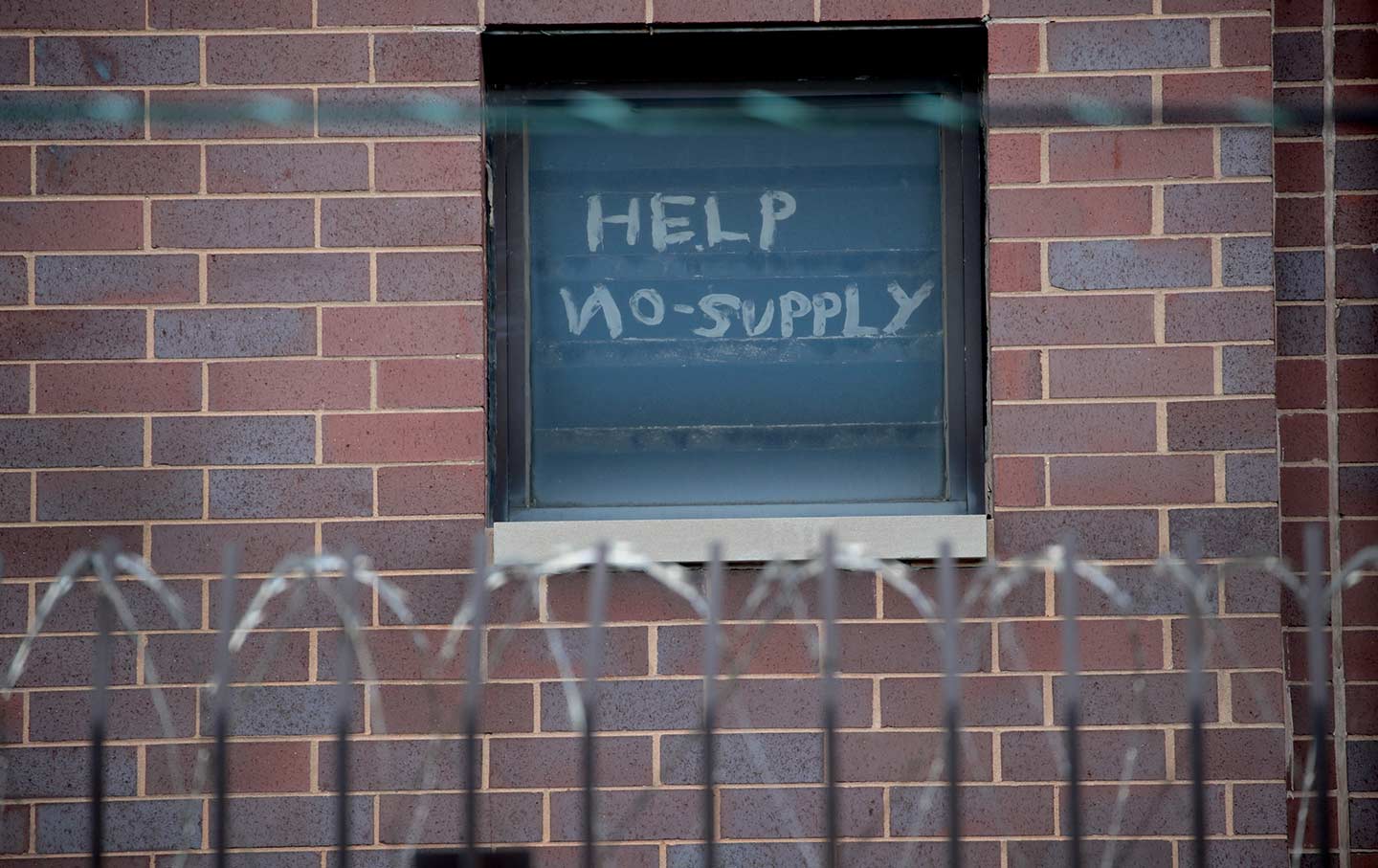 A sign pleading for help hangs in a window at the Cook County jail complex on April 9, 2020 in Chicago, Illinois. (Scott Olson / Getty Images)

The Covid-19 pandemic has savagely ripped the fancy window dressing from our house of systemic inequality and revealed the United States for what it is: a country where the wealthy can live in relative comfort through a pandemic struggle, while poor people wait for hours at food banks, are fired from jobs, or left to languish in hospital corridors. It has shown that ours is a society that forces millions to cling to what they can for survival, with no guarantee of help coming from those in power.

Perhaps most powerless to face down this crisis, though, are the millions of people literally held captive by our system of mass incarceration. According to the Bureau of Prisons, there are 649 federal detainees who have tested positive for Covid-19 nationwide; more than 10,000 people, including staff, have tested positive at the state prison level, and we do not even know how many people in jails have Covid-19, even though jails are a major pandemic incubator. Lack of testing and delays in reporting guarantee that these are conservative estimates. Those trapped in jails and prisons at this time are unable to practice any of the precautionary measures that are vital to slow the spread of the pandemic. Overcrowding makes social distancing impossible; incarcerated people sleep in beds only a few feet apart from each other, live in units without soap or hand sanitizer, listening to their neighbors cough and wheeze without recourse.

Alcohol-based hand sanitizer, which is flying off store shelves, is banned in jails and prisons, stripping detainees of a simple, yet lifesaving tool. A brutal, inhumane irony is that, while detainees can’t possess alcohol-based sanitizer, they work long hours for slave wages to manufacture it for public consumption.

As a result, detention, even for minor offenses, has become a potential death sentence. Last week, 138 detainees at a Denver facility tested positive for Covid-19. More than a third of cases in Arkansas are found in the state prison. And in a Marion, Ohio, prison, a jaw-dropping 78 percent of its detainees have tested positive. The numbers tell a harrowing truth: Jails and prisons are becoming an epicenter of the pandemic. What’s happening on the outside is not lost on those on the inside. Pre-pandemic conditions in prisons and jails already placed detainees at risk of violence, something the current outbreak has exacerbated. Concerns about Covid-19 outbreaks have led to uprisings and protests nationwide.

Given the enhanced risk of outbreaks in jails and prisons, relatively little attention has been paid to the role of the officials locking people up in the first place: The prosecutors. Right now, having the power to decide who goes to jail or prison and who goes home makes a local prosecutor one of the most powerful public safety and public health officials in our communities, who could play a vital role in flattening the curve.

Activists and organizers who have explicitly advocated for decarceration are finding new allies as Covid-19 tears through incarcerated populations nationwide. A growing chorus of elected officials have called for the strategic release of the elderly, medically vulnerable, folks serving sentences for nonviolent offenses, and those caged for being too poor to afford bail. “The job is not about locking people up and throwing away the key; it’s about protecting the public, even—perhaps especially—in today’s extraordinary circumstances,” Elie Honig wrote in a recent CNN editorial.

Tragically, some prosecutors have stood in the way of a wide-scale release, to disastrous consequences. In my home of Queens, New York, District Attorney Melinda Katz took two weeks to consent to the release of 30 incarcerated people—less than 1 percent of the population of the Rikers Island jails. Despite the jail population’s now dipping to the lowest it has been since the 1940s, incarcerated elders with dire medical conditions and others are still being held on charges like food theft and technical parole violations.

When local prosecutors act swiftly, lives are saved, with no risk to public safety. San Francisco District Attorney Chesa Boudin acted early, releasing people who couldn’t afford to pay bail and elderly and medically at-risk detainees, and approving early release for those nearing the end of their sentence. To date, San Francisco’s jail population has been reduced by nearly 40 percent. “That has created the conditions for the jail medical team to implement some level of social distancing, to isolate people who are incarcerated who show symptoms, to find ways to actually meet the medical needs of folks who have other medical conditions besides Covid-19 who are housed in the jail. And in doing so, at least to date, we have managed to avert what could be a really catastrophic outcome,” Boudin told NPR.

Boudin isn’t an anomaly. In Philadelphia, District Attorney Larry Krasner is working to meet the moment by releasing those charged with nonviolent offenses or misdemeanors without posting bail. He’s also encouraged the local police to exercise discretion when making arrests, and has taken on judges who refuse to decarcerate during the pandemic.

While among the most effective, they aren’t the only ones. What we are seeing now, from New Jersey to California to Montana, is the implementation of the principle progressive prosecutors like Boudin, Krasner, and others have promoted for years: Public health is public safety. The pandemic is the ideal time for a paradigm shift from a focus on punishment to public health outcomes. Local prosecutors can and should lead the way. Others have to follow.

Mayors and governors around the country are now putting into action ideas advocates, directly impacted people, and enlightened DAs have long fought for, and been told were impossible. This pandemic has revealed that adequate discharge planning, robust work release programs, and freeing up hotels to house the homeless are effective, and should’ve been done a long time ago. It should not take a crisis like this to realize that compassionate and stabilizing public health approaches are the key to public safety.

The pandemic has put each and every one of us in survival mode, pushing one single question to the forefront: How do we save lives and keep people safe? Progressive prosecutors have the tools to help answer that question. We should have been listening all along.