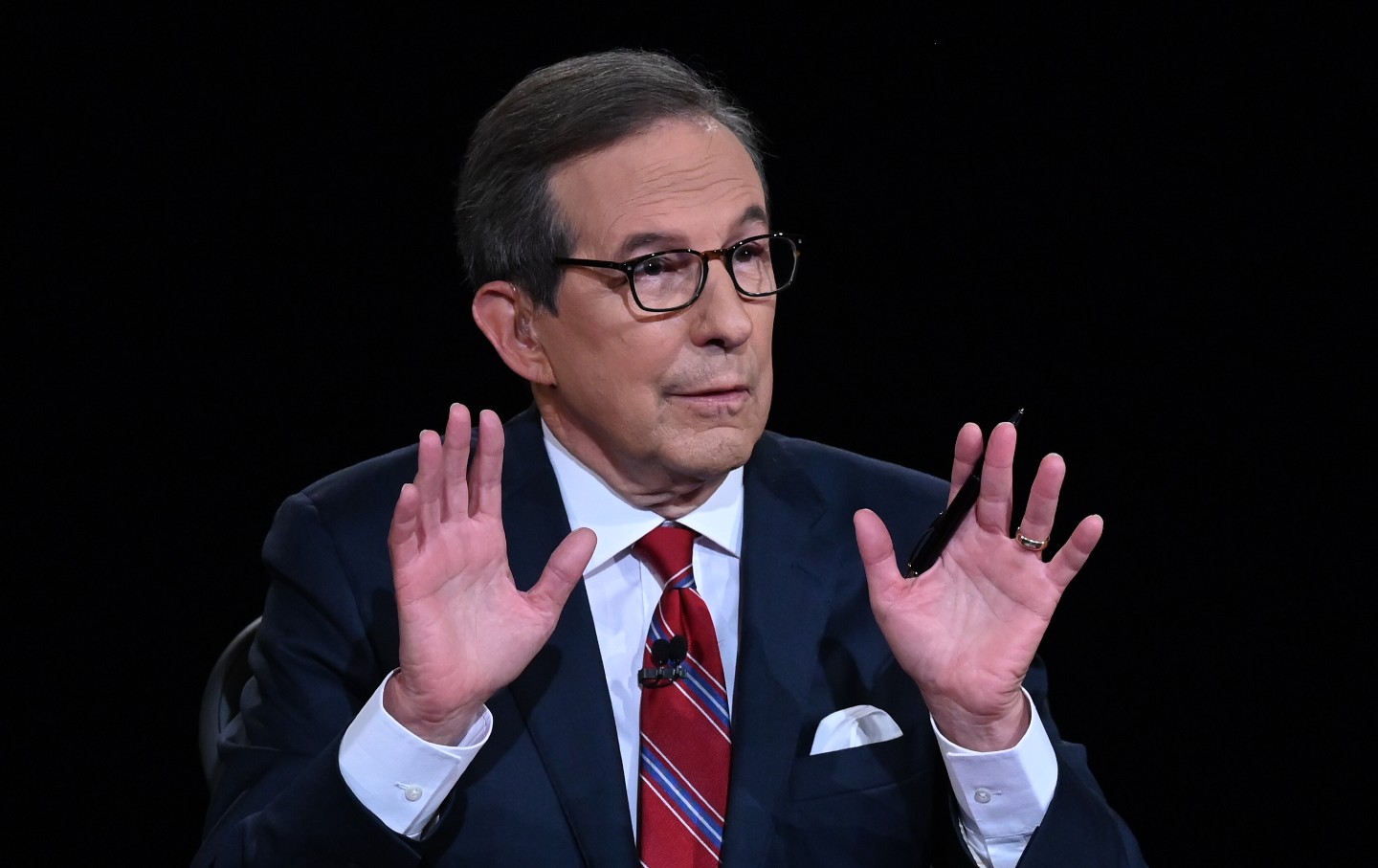 The first presidential debate of 2020 was a wretched affair, more a verbal brawl than a discussion. The candidates were constantly interrupting each other, with Trump especially given to heckling while Joe Biden made a forlorn effort to get a few words in edgewise. Trump was manic and Biden often seemed dispirited and baffled.

CNN’s Dana Bash was bluntly honest when she said, “That was a shitshow.” Her fellow news host Jake Tapper more politely called it “a hot mess” and a “dumpster fire.” Rachel Maddow of MSNBC described it as “a monstrous unintelligible display of logorrhea.”

Trump has been known for using sharp elbows in debates, but never before has he been so blustery and intent on shouting down a rival. As The New York Times reports, Trump, “interrupting throughout the debate, appeared aggressive and assertive, at one point challenging Mr. Biden to name law enforcement groups that had endorsed his campaign. The president also claimed that antifa would overthrow Mr. Biden.”

The fault for the disastrous debate belongs not just to Trump but also to Chris Wallace, the moderator who did nothing to moderate the constant barrage of insults and cross talk. He allowed Trump to rant and rave in an unhinged way, refusing to push back. Instead, Wallace sounded like a nervous nephew trying to calm down a drunk uncle holding forth in a Thanksgiving dinner. When he did ask questions, Wallace often framed them in a right-wing fashion, as when he asked whether protesters should be prosecuted. He also claimed that the economy is enjoying an unexpectedly robust rebound, which may be true of the stock market but not of long-term unemployment or other indicia of life for ordinary workers.

But beyond Trump’s frothing fulmination, the actual content of what he said was often disturbing. In fact, he used the circus-like atmosphere he created to reinforce his authoritarian threat to American democracy.

The two most notable examples were Trump’s unwillingness to categorically criticize racist political violence and his fearmongering about election security.

In his answer to one of Wallace’s few forceful queries—an unvarnished appeal to the president to condemn white supremacist violence—Trump gave a shout-out to the Proud Boys, an authoritarian, member-based organization that has instigated numerous fights with left-wing protesters and actively promotes political violence. Far from criticizing the group, Trump’s comments seemed calculated to legitimize them. The New York Times distilled the disastrous exchange:

President Trump refused to categorically denounce white supremacists on Tuesday night, diverting a question about right-wing extremist violence in Charlottesville, Va., and Portland, Ore., into an attack on “left-wing” protesters.

“Are you willing tonight to condemn white supremacists and groups to say they need to stand down and not add to the violence and number of the cities as we saw in Kenosha and as we’ve seen in Portland?” Chris Wallace, the moderator, asked the president.

“Sure. I’m willing to do that,” said Mr. Trump, quickly adding, “Almost everything I see is from the left wing. Not from the right wing.”

When Mr. Wallace pressed on, the president asked, “What do you want to call them?”

Wallace then singularly failed to press Trump on this point, and continued as if nothing of note had been said.

Trump also said he’s “counting” on the Supreme Court to look into the result of the upcoming election. Many of his lengthy, often off-topic comments were peppered with predictions of disaster in the coming vote count. Toward the end of the debate, he gave his usual dire warnings about voting by mail and urged his followers to monitor polling stations. “This is going to be a fraud like you’ve never seen,” he said. As The Washington Post reports, “Trump said he ‘can’t go along’ with an election result based on millions of mailed ballots, particularly if many of those ballots are received and counted after Election Day.” 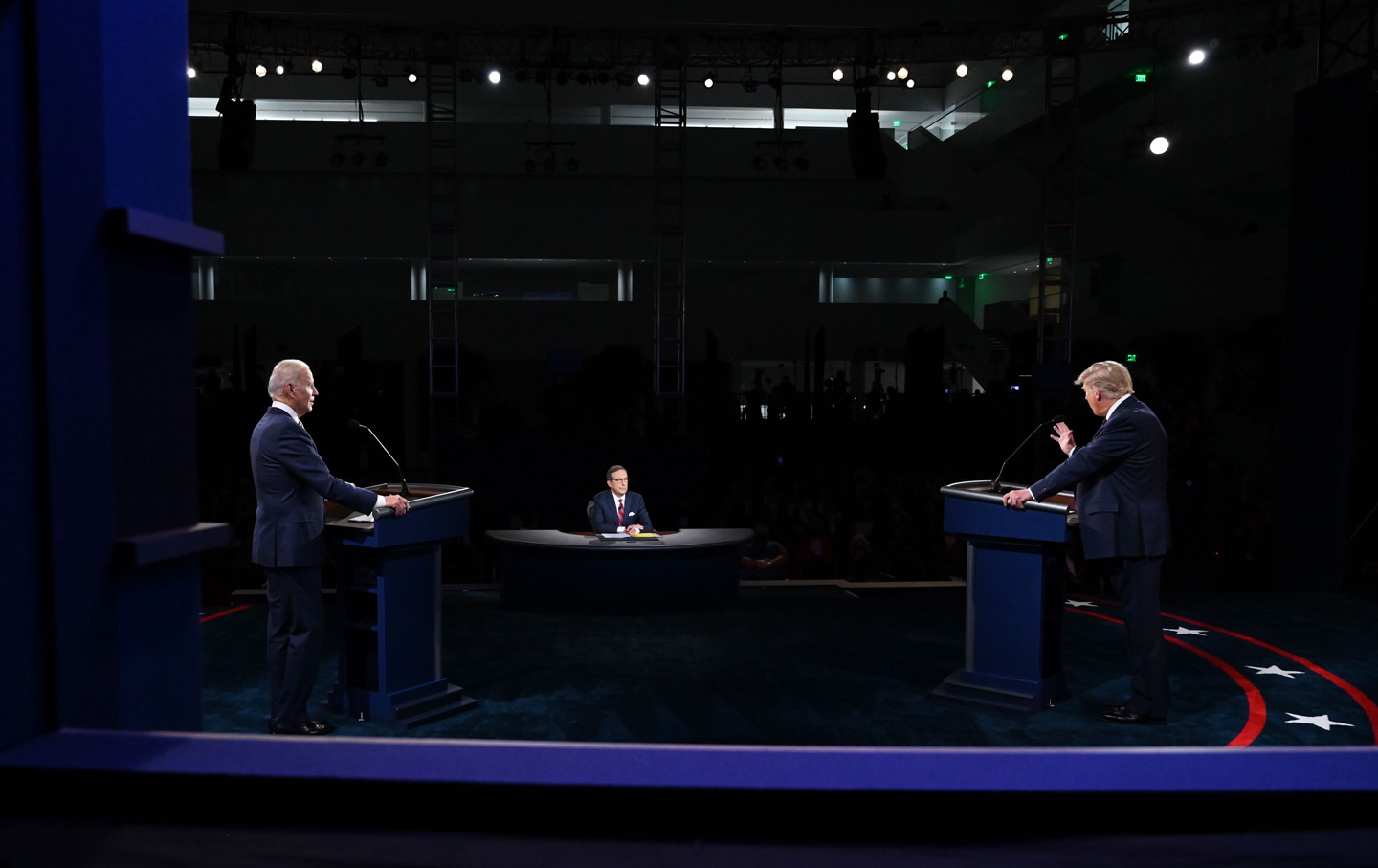 Will Someone Please Wake Me Up?

We’ll find out in the coming days and weeks what impact, if any, the debate had on the voters. It’s entirely possible that the night was a wash or a net loss for Trump. His behavior here wasn’t designed to win over wavering voters. Rather, he was rallying those already on board while also trying to shout down Biden, so that Biden’s message couldn’t get heard.

But even if Trump loses voters from this debate, he may have managed to eke out a win by stirring up fear about the coming election, making it seem even more uncertain and perilous than before. He has everything to gain from a chaotic atmosphere—the better to delegitimize the election—if he loses.

In sum, the debate was part of Trump’s larger assault on American democracy. Thanks to Wallace’s feckless moderation, Trump once again put a knife to the throat of the republic.