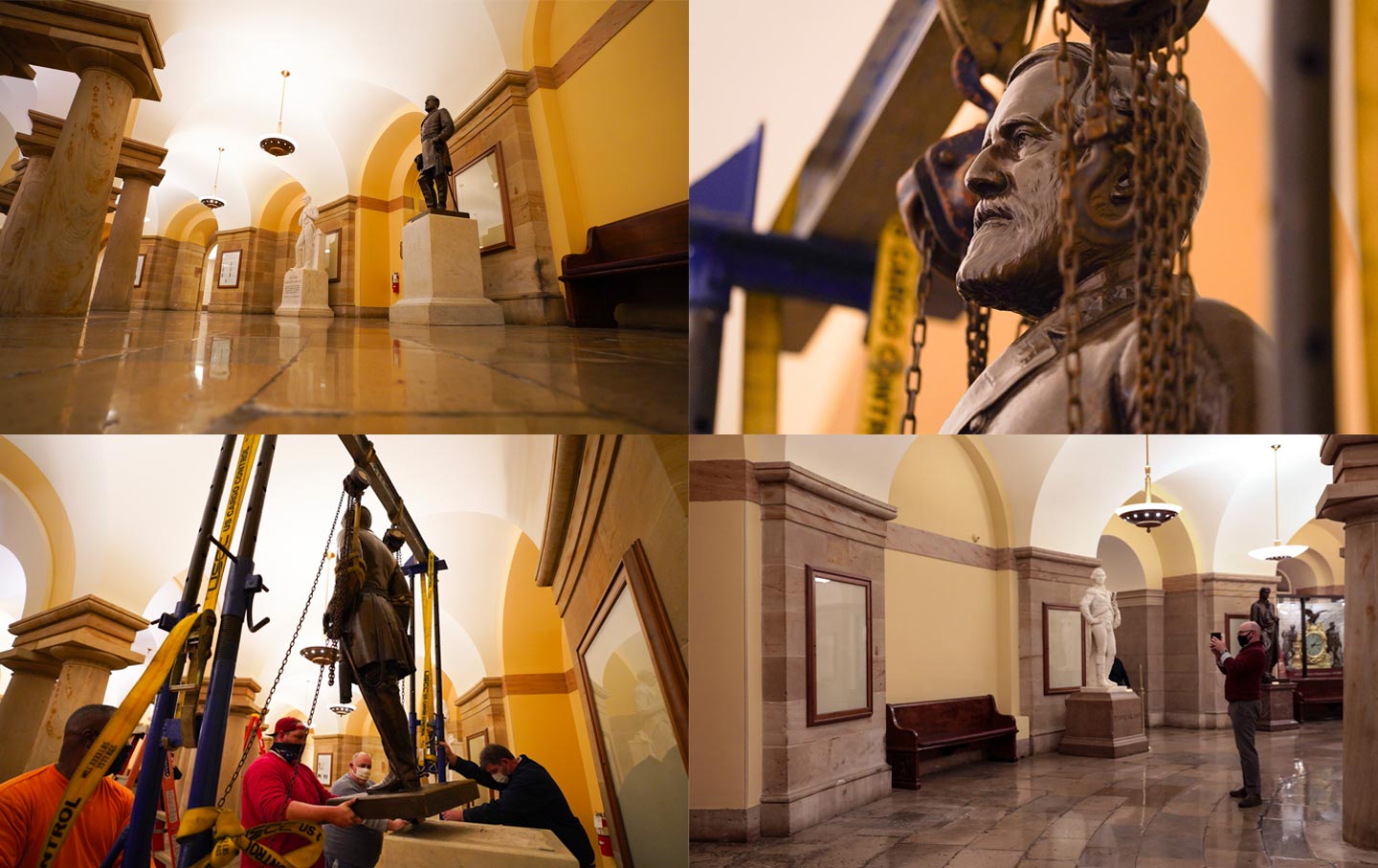 At 4 am on Monday, in the crypt of the United States Capitol, a team of workers removed the statue of Robert E. Lee that since 1909 has represented the Commonwealth of Virginia in the National Statuary Hall Collection.

Three years after neo-Confederates, neo-Nazis, and their white nationalist allies rioted in Charlottesville, Va., over proposals to remove a statue in that city that honored the general who commanded the Civil War forces that defended slavery, one of the most recognizable monuments to the Confederacy and its treasonous generals was removed from the citadel of American governance in Washington, D.C.

Virginia Senator Tim Kaine, Virginia Representative Jennifer Wexton, an aide to Virginia Representative Donald McEachin, and a representative of Virginia Governor Ralph Northam’s office stood by as the monumental image was removed. It was a “historic and long-overdue moment for our Commonwealth,” said Wexton and McEachin, both Democrats, who on Monday announced, “The Robert E. Lee statue honors a legacy of division, oppression, and racism—a dark period in the history of our Commonwealth and our country. There is no reason his statue should be one of the two representing Virginia in the U.S. Capitol.” Kaine posted a video of the transfer of the effigy from its place in the crypt, where statues commemorate the 13 states that were original colonies of the United States.

The removal of the Lee statue took place quietly and in the dead of night. Yet, it represented a huge victory in the struggle over historical memory.

Since the end of the Civil War, a cruel lie has been perpetuated by Southern partisans who suggested that the Confederacy was a noble “lost cause” and that Lee was an honorable man drawn into a complex struggle. That was never the case. More than 90 years ago, W.E.B. Du Bois warned against “renewed effort to canonize Robert E. Lee,” writing in The Crisis:

One thing—one terrible fact—militates against this and that is the inescapable truth that Robert E. Lee led a bloody war to perpetuate slavery. Copperheads like the New York Times may magisterially declare: “of course, he never fought for slavery.” Well, for what did he fight? State rights? Nonsense. The South cared only for State Rights as a weapon to defend slavery. If nationalism had been a stronger defense of the slave system than particularism, the South would have been as nationalistic in 1861 as it had been in 1812.

Du Bois’s assessment was the true one. But it was resisted in his time, and for decades afterward. To this day, President Trump perpetuates the mendacious suggestion that reasonable people can disagree about Lee’s service as commander of the Army of Northern Virginia from 1862 until its surrender in 1865. Even after Heather Heyer, a 32-year-old advocate for racial justice, was killed in 2017 by a white supremacist who had come to Charlottesville to defend the Lee statue, President Trump was peddling nonsense about “very fine people on both sides” of the debate about honoring the Confederate general.

Trump has in recent years made himself the most prominent defender of the lie. After Joe Biden said that Trump’s response to Charlottesville made him decide to bid for the presidency in 2020, Trump responded by talking up Lee as a “great general.” This year, the president has defended the Confederate flag as a source of pride for Southerners, and gone so far as to propose to veto the National Defense Authorization Act to block plans to remove the names of Confederate generals from military bases.

But Trump’s argument is losing, as are the dead-ender defenses of the C0nfederacy by other Republicans. Confederate symbols are being discarded, flags are being redesigned (most recently in Mississippi), and statues are being removed. This is happening because movements have made demands, and members of city councils, legislatures, and Congress have responded. In 2017, Representative Barbara Lee of California announced, “In the wake of Charlottesville, it’s abundantly clear that much work remains to root out racism from our society. Across the country, Confederate statues and monuments pay tribute to white supremacy and slavery in public spaces. These hateful symbols should have no place in our society and they certainly should not be enshrined in the U.S. Capitol.” In 2020, she introduced the Confederate Monument Removal Act, legislation to remove all statues of individuals who voluntarily served the Confederate States of America from display in the United States Capitol, with Senator Cory Booker, who said, “There is nothing to gain from sanitizing our history—the stain of slavery and segregation will always be a part of our country’s checkered past. However, it’s a disservice to all Americans to venerate in the sacred space of the U.S. Capitol those who took up arms in order to tear this country apart. Confederate statues belong in a museum, not in the U.S. Capitol.”

The fight to remove statues of Lee and other Confederate generals has faced hurdles. Senate majority leader Mitch McConnell said earlier this year, “I’m a descendant of a Confederate veteran myself. What I do think is clearly a bridge too far is this nonsense that we need to airbrush the Capitol, and scrub out anybody from years ago who had any connection to slavery.” But Lee and Booker have kept reintroducing their bill, and it could get traction with the seating of a new Congress and a new administration. An original cosponsor of the bill, California Senator Kamala Harris, is now the vice president–elect of the United States. In November, Virginia voted for Harris and Biden—after a 2020 campaign in which Biden declared, “I think all those Confederate monuments to Confederate soldiers and generals, etc., who strongly supported secession and the maintenance of slavery and going to war to do it, I think those statues belong in museums. They don’t belong in public places.”

Even before Biden and Harris take office, Virginia has acted to set the record straight. The state’s Commission for Historical Statues in the United States Capitol voted unanimously in July to recommend the removal of the Lee statue, which will now be stored at the Virginia Museum of History and Culture in Richmond. The commission has recommended that Virginia’s new statue in the Capitol honor civil rights icon Barbara Rose Johns, who as a 16-year-old in 1951 led a student walkout to protest segregation and overcrowding at an all-Black high school in Farmville, Va. As state Senator Louise Lucas, the chair of the commission, explained, Johns was identified as “a historical figure who represents the values of today’s Virginians.”

The battle for history rages on. But the arc is bending toward justice. As Virginia House of Delegates member Jeion Ward announced Monday, “As of this morning, Virginia will no longer honor the Confederacy in the halls of the United States Capitol.”