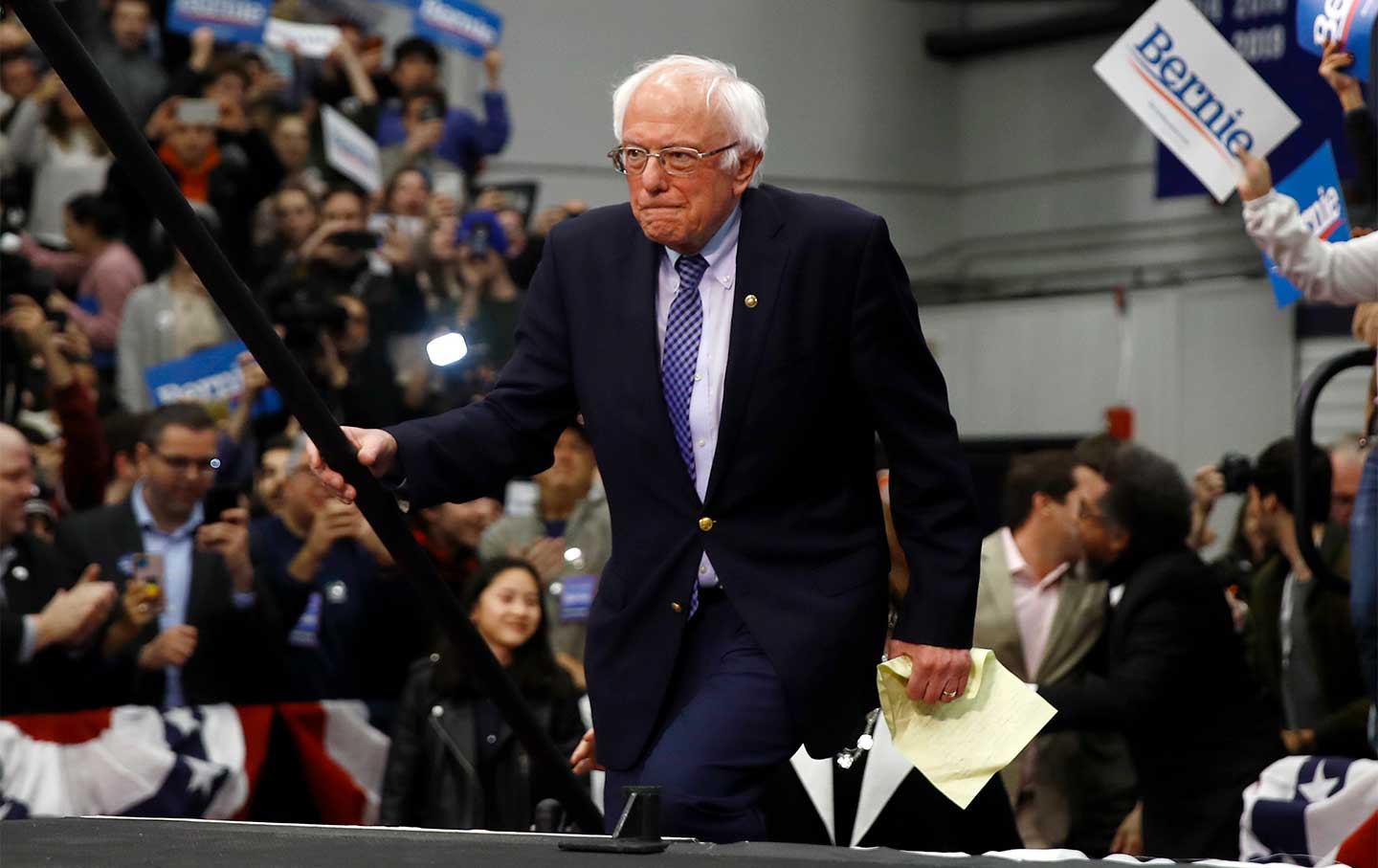 The latest round of Russian interference panic followed a familiar script. Vague leaks that US intelligence officials have determined that Russia intends to boost both Donald Trump and Bernie Sanders made front-page headlines. Cable news pundits and Democratic luminaries seized the moment with ritual alarmism: “The Russians are coming,” MSNBC’s Chris Matthews and Joe Scarborough pronounced, and Trump—who “is a Russian operative” (MSNBC’s Lawrence O’Donnell) and “Putin’s puppet” (Hillary Clinton) “is trying to cover it up” (CNN’s Don Lemon). Obama alum and Pod Save America host Dan Pfeiffer declared on Meet the Press that the Kremlin is “trying to give Trump the opponent that Trump wants.” Clinton strategist and newfound Kremlinologist James Carville concurred: With Sanders winning Nevada, Carville told MSNBC, “the happiest person right now is Vladimir Putin.”

The outcry proceeded despite a stunning lack of evidence or even a single detail on what the supposed Russian interference entails. “It is not clear what form that Russian assistance has taken,” The Washington Post noted; Russia, The New York Times added, has “a new playbook of as-yet-undetectable methods.” This raises the obvious question: If Russian methods are undetectable, how can US officials detect them? Perhaps there is nothing to detect: In yet another familiar development, the story quickly unraveled. Citing three national security state officials, CNN reported on Sunday that the characterization of the available intelligence was “misleading” and “overstated.”

If there is no evidence for this supposed new Russian interference effort, what accounts for the dire warnings and media hoopla? The answer lies in the one playbook whose methods are easily detectable by now: the Russiagate one, primarily deploying deflection and projection.

For more than three years, US audiences have been flooded with fearmongering about a supposed “sweeping and systematic” Russian interference campaign, and even more intense speculation—since shown by Robert Mueller to be baseless—that the Trump camp conspired with it. A core goal has been to help US elites, particularly in the Democratic Party, avoid challenging the corrupt system that gave rise to Trump’s presidency. Such a challenge would threaten their own status and power inside that system. For national security state officials, it doubled as a means to undermine Trump’s calls for better cooperation with Russia and stigmatize the appeal of his campaign-trail promises, however insincere they were, of ending regime change wars abroad.

The Russiagate playbook has been a mirror image of what its adherents ascribe to Russia: to “sow chaos” and “undermine confidence in American election systems” by spreading disinformation and hyberbolic warnings. The Russians, via their “dark arts,” are all-powerful, able not to just install a president in the White House, but to hack into voting systems, cut off heat during frigid temperatures, and help “convince blacks not to vote in Michigan.”

The Democratic Leadership’s Strategy on Impeachment Is Doomed and Dangerous

Embedded in this playbook is an elitist condescension toward the public targeted by it. Critical issues that affect regular people’s lives are relegated to the margins, replaced by breathless panic that presupposes them to be malleable enough to be duped by Russian memes and bots. It also has no relationship to the reality of what this supposed Russian operation actually amounted to: juvenile posts on social media that few people actually saw and that seldom mentioned the 2016 election. Contrary to claims that the campaign was “Russian intelligence-backed,” the Russian social media ads were the product of a private firm with no established ties to the Russian government, as Mueller’s prosecutors have conceded in court. If Russian intelligence indeed stole Democratic Party e-mails (and I do not think that has been proven to date), then that would mean it is guilty of a cyber-crime that exposed accurate information about Democratic National Committee corruption—not fabricated propaganda.

The fact that this cynical playbook is now being used against Sanders and his presidential campaign should be no surprise. Sanders’s policy agenda is a threat to the same forces behind Russiagate. In fact, he is a far more dangerous threat than Trump ever was. Trump appealed to voters by claiming to be anti-establishment. It was a con, as his presidency has made clear. Sanders, by contrast, not only has a record of standing up for the working class but a political campaign powered by it. Trump’s real base was never the abandoned workers that he won over in Michigan or Wisconsin but the billionaire moguls like Sheldon Adelson and Robert Mercer who funded his campaign, and whom Trump has lavishly rewarded with a massive upward transfer of wealth, cuts to social spending, increased bellicosity toward Iran, and other items on the far-right wish list.

In the face of Trump’s harmful agenda, the Russiagate narrative was, on the surface, convenient and comforting: The Trump nightmare was the handiwork of Putin, and it will surely come to an end once Mueller uncovers the hidden treason. Not only was this an easy fix, it was also impossible to avoid: Millions of fearful liberals were offered no other hope. The activist energy of Trump’s first weeks in office quickly receded, and the “resistance” became personified in a patrician former FBI director and defined by obsessing over his investigation’s daily minutiae. Mueller ultimately delivered a series of indictments that had nothing to do with a Trump-Russia conspiracy. The Mueller probe’s sequel, Ukrainegate, also failed, leaving Trump with the highest approval ratings of his presidency.

The Russiagate playbook was made by possible by the trauma of 2016, but it is no match for the excitement of 2020. The preoccupations of elite circles since Trump’s victory—the search for a pee tape, the contents of a Trump Tower meeting, Michael Cohen’s cell phone transmissions near Prague, text messages between US bureaucrats in Ukraine—have all either been disproven or discarded or have disappeared into irrelevance. The very real problems that such fixations overshadowed, however, are still with us: a broken health care system, stagnant wages, the opioid epidemic, climate catastrophes, and much more. With Mueller gone and impeachment a bust, the tired Cold War fantasies of a failed elite class are no match for a grassroots candidate who is speaking about real issues and has a genuine chance of defeating Trump.

While it was easy to hide Russiagate’s real aims behind the veneer of opposing Trump, they are more obvious when used against Sanders. On the eve of the Nevada vote, Sanders made no effort to hide his view that the Russian interference leak was timed to hurt his chances—a last-minute ploy that failed miserably. The anonymous officials who helped disseminate it did not hide their agenda either: “Current and former officials” fed The New York Times a view that happens to comport with the talking points of desperate Democratic Party centrists: “Moscow could potentially consider Mr. Sanders a weaker general election opponent for the president than a more moderate Democratic nominee, according to two people familiar with the matter.”

That line captures the essence of the Russiagate playbook, and its futility today. “Moscow” is not a real place, but a stand-in for the political agenda that anonymous officials wish to promote. If party leaders and cable news pundits are unable to convince voters that Democrats need a “moderate” nominee, they can always try to farm out the task to a mythical Moscow.

Nor is it any surprise that the Trump administration is now trying to exploit the playbook that liberals used against them. “Russia would like Bernie Sanders to win the Democrat nomination,” national security adviser Robert O’Brien told Face the Nation, “because he wants to spend money on social programs and probably would have to take it out of the military.” It is easy to recognize the right-wing agenda embedded in such an assertion when it comes from a Trump flunkie. But it also happens to be the logical corollary of the narrative that liberals have been told to embrace since 2016. The upshot of accusing Trump of being a puppet of Putin has been to encourage—and then ignore, given its inconvenience to the narrative—his embrace of militarist policies toward Russia, most dangerously a reckless escalation of the nuclear arms race.

Sanders will not be immune to such pressures. His campaign has largely catered to Russiagate talking points and not questioned the attendant hyperbole and underlying agendas. That may be a sound strategic choice during a political race, when Sanders’s opponents seek any chance to manufacture a controversy, from mean Bernie Bros to his praising Cuba’s education system, that distracts from real issues. But over the long term, if Sanders’s agenda has any chance of success, he will have to stand up to the militarist Cold War–addled agenda that has gripped the Democratic Party since 2016. The social programs that Sanders plans at home will not be possible so long as the United States is locked in a chauvinist, costly proxy conflict with the other top nuclear power.

To break out of that death grip will require a political courage that other Democratic front-runners have lacked. Fortunately, Sanders has a record of defending politically fraught but principled stances, and an energized base to back him up. And that playbook—a politics rooted in real issues and real people—is far more powerful than any cynical methods that Sanders’s foes can deploy.