Every year, scores of species disappear into the oblivion of extinction, stamped out, in one way or another, by us humans. Sadly, 2022 was no different. This year, the International Union for Conservation of Nature’s Red List of Threatened Species—the gold standard, sine qua non, most reliable source of such sorrowful information—added 66 new species to its roster of no-longer-extant creatures. With the following obituaries, we honor four of them.1

We would love to tell you that the last Maracay harlequin frog died peacefully in its home in Maracay, Venezuela, but that wouldn’t be very honest of us. We don’t imagine that having one’s habitat destroyed and turned into a bustling city would be a peaceful way to go. While the poison in our beloved frogs’ skin protected them from the jaws of predators, it seems it couldn’t keep them safe from our appetite for deforestation. The last known Maracay harlequin frog died in 1957; now, after decades of searching for signs of surviving ones, the IUCN has confirmed what so many of us feared: The species is extinct.2

We humans probably should have seen this coming sooner. When Cornelius Vogl, a German missionary after whom the species is named, first saw them in 1933, his impulse was to kill 415 of them and send them to the Natural History Museum in Munich, where many of their faded, formaldehyde-soaked bodies remain. Although they were reported to be abundant at the time, we still don’t understand why anyone would want hundreds of dead harlequin frogs.3

With their yellow skin and conical warts, Atelopus vogli can never be replaced. They do, however, leave behind a possible close relative, the Atelopus cruciger. Sadly, this speckled cousin is also critically endangered; the nine other Atelopus species in Venezuela haven’t been seen since 1980. We hope never to have to write an obituary for any of them.4

On quiet days, we like to imagine that we can still hear the Maracay harlequin frog’s call, a low vibrating buzz, coming down from the great semi-deciduous forest of the heavens. Or perhaps it’s just a cell phone. Whatever it is, and wherever our amphibian friends are now, we hope that their long toes are climbing the tallest trees, and that the ants and mites taste better than they ever did on Earth. There will be no funeral. In lieu of flowers, please honor their memory by suppressing your urge for habitat destruction.5

It is with deep sadness that we inform you that the escarpment cycad, a member of the zamiaceae family whose ancestors survived three mass extinctions, is no longer with us. It has gone the way of the sauropod, which was known to munch happily on cycad leaves until a 110-mile-wide asteroid plunged into the earth. While our hardy cycad friend was able to survive what the sauropod could not, it did not, alas, manage to outlast us humans. This year, our green, frondy friends were declared extinct in the wild.6

Although escarpment cycads had been around longer than opposable thumbs, there were only five to seven of them left when we humans first learned about their existence in 1995. They were found exclusively in the mountains of Limpopo, South Africa. After they were discovered, poachers dug up most of them to sell for thousands of dollars to private collectors. The bits and pieces that remained were taken to an undisclosed safe location where, we hope, they remain as happy and loved as one can be while being the last three to four members of an entire species.7

The loss of a species that few will have heard of and even fewer seen may not seem noteworthy. But, if you’ve ever seen a painting, drawing, or a movie with a dinosaur, they or their cousins are almost always there, in the background, fronds bristling, looking like slightly confused palm trees. In order to preserve the truest memory of our sweet escarpment cycads, we must ask you to keep in mind that cycads’ resemblance to palm trees is purely coincidental, as that they are most closely related to ginkgos and conifers.8

Our sweet escarpment cycad preferred full sun and light watering. Even though it is survived by over 300 other cycad species, we will specifically miss the escarpment cycad’s ability to produce densely velvety cones and relatively narrow leaflets. The cycad family is one of the rarest plant groups on Earth, which may explain why even Brad Pitt and Oprah Winfrey are among their (legal) collectors and admirers.9

While we would like to blame escarpment cycads’ slow growth and infrequent reproduction for their untimely departure, we must admit, in order to truly honor their memory, that their death is entirely our fault. We are sad that we caused habitat loss for them and took them from their homes. We just wanted to make a little money and impress our influential friends with our rare plant collections. Even though we mourn the loss of their freedom, we hope that wherever the poached cycads are, they are being watered with Evian and sung to every morning.10

We don’t usually condone grave-digging, but in the case of the Mauritius duck we are glad that their fossilized remains were uncovered 129 years ago in Mare aux Songes on the island of Mauritius. This way, at least, we knew they existed. Until then, the Mauritius duck had been known only from 17th-century captain’s logs and journals, with no physical traces to confirm they had once waddled the earth. Now we know not only that they lived once but that they live no longer: Earlier this year, the IUCN added them to the list of extinct species.11

Our winged compatriots went by many names, including Mascarene teal and Sauzier’s teal, the latter in honor of the man who discovered their remains in 1893. Unlike their Mauritian neighbor, the famous dodo (deceased), they were capable of flying, and their bones have also been found on the nearby island of Reunion.12

We wish we knew more about the time on Earth of this duck of many names, but, sadly, the written records we have of it are not sufficient to know its likes and dislikes or its heart’s deep desires. We know it was a dabbling duck who frequented the freshwater marshes and ponds on the islands it called home. We also know that, until the Dutch arrived in 1598, the ecosystem where our endemic friend flapped and waded had remained undisturbed by humans in any significant way. It took just 98 years from that inauspicious moment for the Mauritius duck, once described as being seen in “great numbers,” to be hunted down to its last surviving member. During the time the Dutch were on Mauritius, most of the vertebrates on the island went extinct, with only eight to nine endemic bird species surviving to this day.13

We are devastated to know that these vibrant ecosystems where our duck lived and loved were destroyed rapidly and that we humans were the sole cause. We hunted animals for fun and for food, and then introduced pigs, rats, and cats—to eat the rats—who ate the eggs and destroyed the nests of many of the endemic birds on the Mascarene Islands.14

Enough time has passed that we would hope the Mauritius duck could forgive us for what we did, but since we haven’t yet learned from our mistakes, we don’t expect to be granted that pardon any time soon. For now, all we can say is that we are sorry we hunted them to extinction, killed their bird friends, and demolished their home as swiftly as Elon Musk demolished Twitter.15 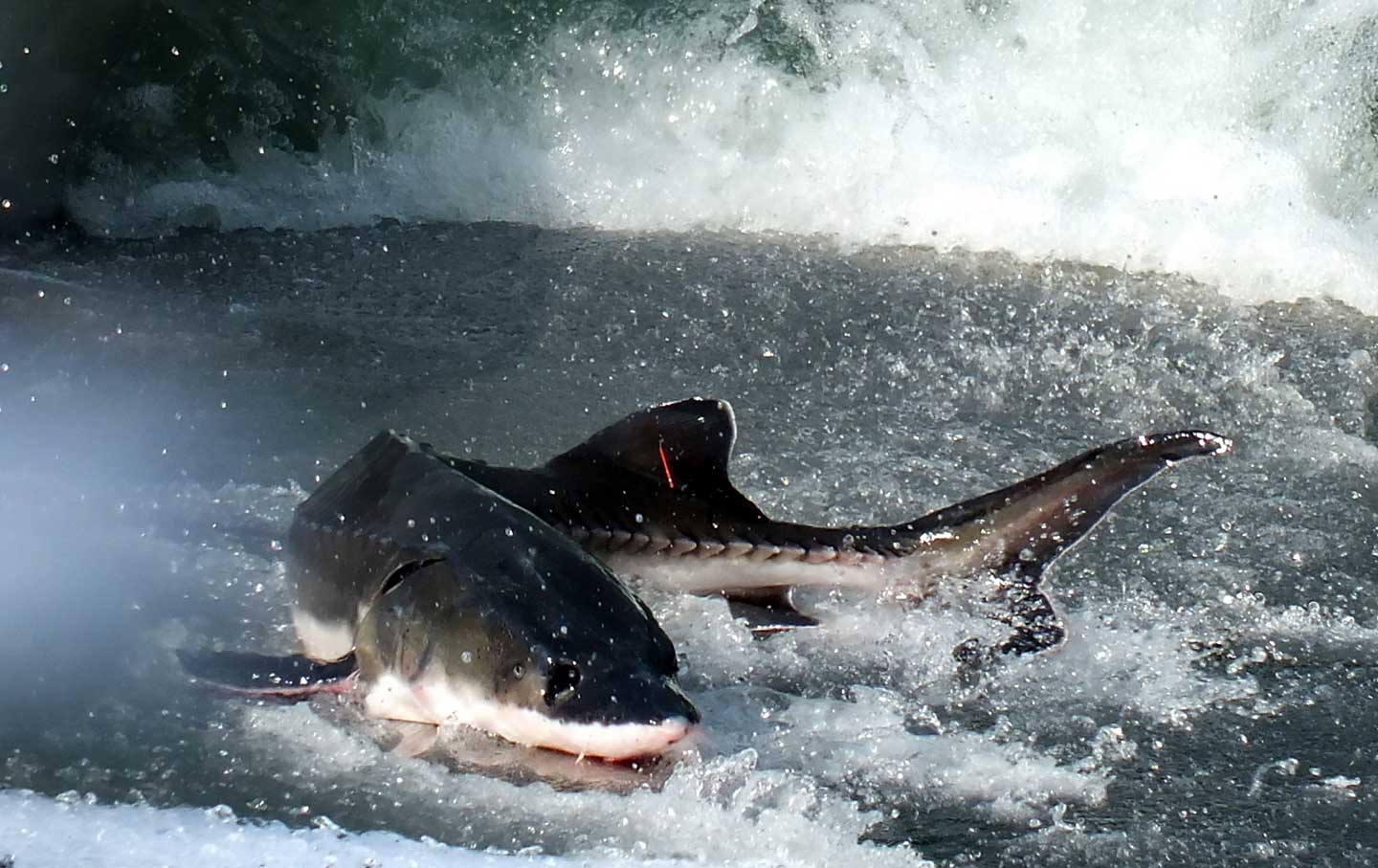 Artificiallly reared sturgeons are released into the Yangtze River on April 12, 2015 in Yichang, Hubei province of China. (Visual China Group via Getty Images)

For almost 30 million years, the Yangtze sturgeon enjoyed a quiet life in the depths of the Yangtze River, vacuuming up small fish, crustaceans, mollusks, and aquatic insect larvae into their prehistoric mouths. So it is with profound sadness that we announce that on July 21, 2022, the Yangtze sturgeon, watery companions to shad, carp, and a muddy assortment of other bottom-dwellers, was declared extinct in the wild.16

These pointy-nosed, double-goateed fish did not evolve much after first appearing in the river during the Oligocene Epoch, a time when creatures like the 24-foot-long hornless rhinoceros that we now call Paraceratherium roamed the planet. We, of course, understand the sturgeon’s lack of evolution to mean that it was as close to a perfect life-form as one can get, just like our friends the cockroaches and horseshoe crabs. Even Darwin himself might have said about them, “If it ain’t broke, don’t fix it.”17

Our sturgeon friends grew slowly, and each one could have outlived every member of the 27 Club by a few years. For sturgeon, they were considered small, but the loss of their comparatively unimposing bodies weighs heavy on our hearts. Like the Chinese paddlefish (may its memory be a blessing), they simply could not breed and thrive any longer in the Yangtze River they called home.18

Dabry’s sturgeon are survived by 26 other species of sturgeon, to whom we send our deepest condolences. We are ashamed to say that, along with our condolences, we must also send regrets and sincere apologies, as we are the reason for their Yangtze River cousin’s demise.19

We humans overfished them because we thought they tasted delicious, and we loved eating their imported eggs from tiny silver spoons or on top of little toasts. We also dumped polluted waste water around them when we built developments and removed forests along the banks of their home. We wish we could say that was all we did, but we also built electric dams that blocked their migration, making it almost impossible for them to breed and spawn. In fact, they hadn’t been able to reproduce successfully in the wild since the year 2000. While we eventually woke up to their travails, and tried to save them by instituting a fishing ban and reintroducing some of their captive-bred brethren into the Yangtze, we wish we had cared enough to do more even sooner. We really do miss seeing them making their way back and forth along the river.20