Every year, the regional bodies known as Continuums of Care (CoCs) conduct point-in-time counts, a census of the region’s homeless population at a particular moment. When California published its results earlier this year, it confirmed what most already suspected: Homelessness, already at emergency levels before the Covid-19 pandemic, had grown worse. Adding every regional count together, the nonprofit newsroom CalMatters found that the state’s homeless population had increased by more than 22,000 people—a nearly 15 percent jump—between 2020 and 2022. And that is almost certainly a significant undercount.

No wonder, then, that the prevailing mood in California is one of frustration—even rage. Over the past two years, the state has committed $14 billion to homelessness. Most of that money has gone to “Housing First” programs, which prioritize getting homeless people into permanent homes instead of mandatory treatment. But despite ample research demonstrating the efficacy of this model, homelessness in the state continues to rise.

The seeming intractability of the crisis has led to a degree of cynicism regarding Housing First policies. Some cities—Los Angeles and Sacramento among them—have returned to a policing-first strategy, trying to fight homelessness by making it illegal to camp in certain areas. Various reactionary elements have attempted to capitalize on the change in mood, arguing that Housing First is ineffective or even harmful.

To better understand why California hasn’t been able to reduce homelessness, it helps to look at a place that has. From 2011 to 2020, while major California cities were seeing catastrophic increases in homelessness, the most populous city in Texas cut its homelessness in half. Houston’s Coalition for the Homeless has placed more than 25,000 unhoused people into permanent housing; its success has turned it into a national model and the subject of a lengthy New York Times profile. After reading that article, I decided to research how Houston’s homelessness response has differed from what we’ve seen across California, to see where California went wrong.

The below chart displays Houston’s dramatic success over the past decade, compared to the consistent increases in homelessness experienced by San Francisco and Los Angeles. (As a reminder, “CoC” stands for continuum of care—the regional body that conducts the point-in-time count within its boundaries.)

The product of my research is a new report, out today, called “Housing Abundance as a Condition for Ending Homelessness: Lessons From Houston, Texas.” The title gives it away: Houston’s success was predicated on a vast supply of low-cost housing. As in much of California, Houston’s homeless services system follows the Housing First model. But because housing in Houston is cheaper and more plentiful, the city’s Housing First efforts are far more successful.

While California cities have spent decades throwing up obstacles to housing construction, Houston has declined to even impose a citywide zoning code. As a result, the city has built new housing units at an annual rate of nine or 10 per 1,000 residents, while development in cities like San Francisco and Los Angeles has consistently failed to keep up with population growth.

The below figure, taken from my report, shows the stark difference in homebuilding between Houston and the two California cities. (“MSA” stands for metropolitan statistical area.) 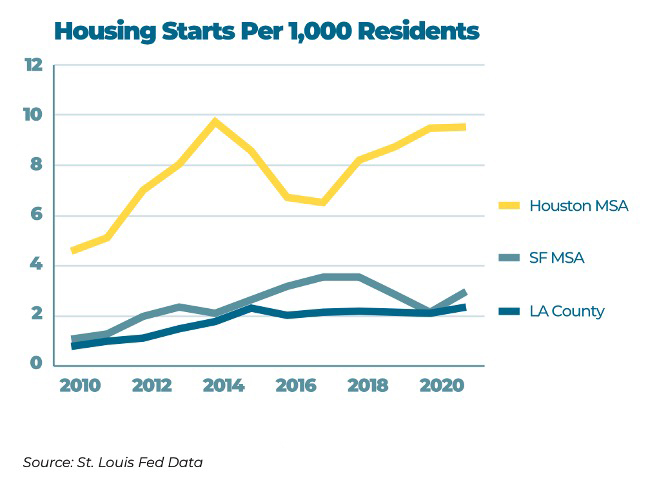 Houston’s liberal land use policies and rapid housing construction have kept prices much lower than in much of California, even as the city’s population has grown significantly faster. The median rent for a one-bedroom apartment in Houston, for example, is about one-third the median rent in San Francisco.

This has several implications for Houston’s homeless services system. The first is that it has kept homelessness from getting so bad that the Coalition for the Homeless can’t keep up. As a substantial body of research has demonstrated, housing unaffordability is the primary driver of homelessness, and because Houston is cheaper than San Francisco, low-income residents are less likely to fall into homelessness. In contrast, in San Francisco, residents become homeless at four times the rate that the city can place them back into housing.

The second implication is that Houston’s homeless services system has a much easier time developing and acquiring housing. The Housing First model can only work when homeless services agencies actually have enough units to meet their clients’ needs. This is a perennial issue in cities like San Francisco and Los Angeles, where the housing shortage has made it harder for homeless services agencies to recruit eligible landlords, and anti-development rules have made it significantly harder and costlier to develop permanent supportive housing. Largely because of the difference in housing costs, San Francisco spends roughly three times as much as Houston to house a single homeless individual. 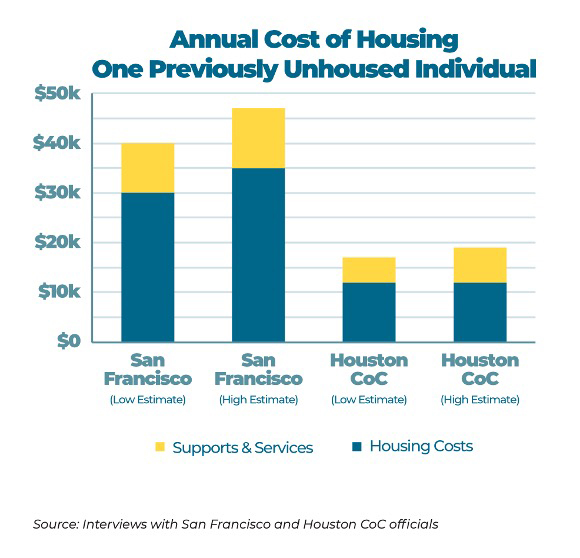 Lastly, Houston appears to face fewer challenges in recruiting and retaining direct service providers. Salaries for frontline workers vary surprisingly little between Houston and high-cost cities like San Francisco; a frontline worker may make between $40,000 and $55,000 per year in Houston, and between $51,840 and $57,600 in San Francisco, according to interviews with nonprofit officials in both cities. But these salaries go much further in Houston. In San Francisco, frontline workers are often severely rent-burdened, meaning that they need to pay more than 50 percent of their income toward rent. Severe rent burden, ironically, is a risk factor for homelessness.

Abundant, low-cost housing in Houston is no accident. Besides lacking a traditional zoning code, the city allows most development through “by-right” instead of “discretionary” permitting—meaning that local officials don’t get veto power over individual projects that otherwise meet all the prerequisites for approval. California should follow Houston’s example and continue to legalize more housing development.

Granted, much of Houston’s development hasn’t been exactly climate friendly. A lot of the city is sprawl, locking in car dependence for too many residents.

But California doesn’t need to follow Houston’s precise development path in order to build more housing. Our cities can accommodate millions more residents without doubling down on car dependency. They just need to legalize more and denser housing while making that housing accessible by alternative modes of transportation. There is no need to sprawl out into previously undeveloped natural lands. California cities could unlock plenty of units within their existing limits if they reversed decades of increasingly draconian zoning maps.

California’s homelessness crisis has been festering for decades, and it will take years to bring the crisis to an end. But Houston’s example teaches us that progress is possible, and that Housing First works. California just needs housing abundance in order to make it work at the necessary scale. We won’t get there overnight, but we can get there; first, we need to make it legal to build enough housing for everyone.