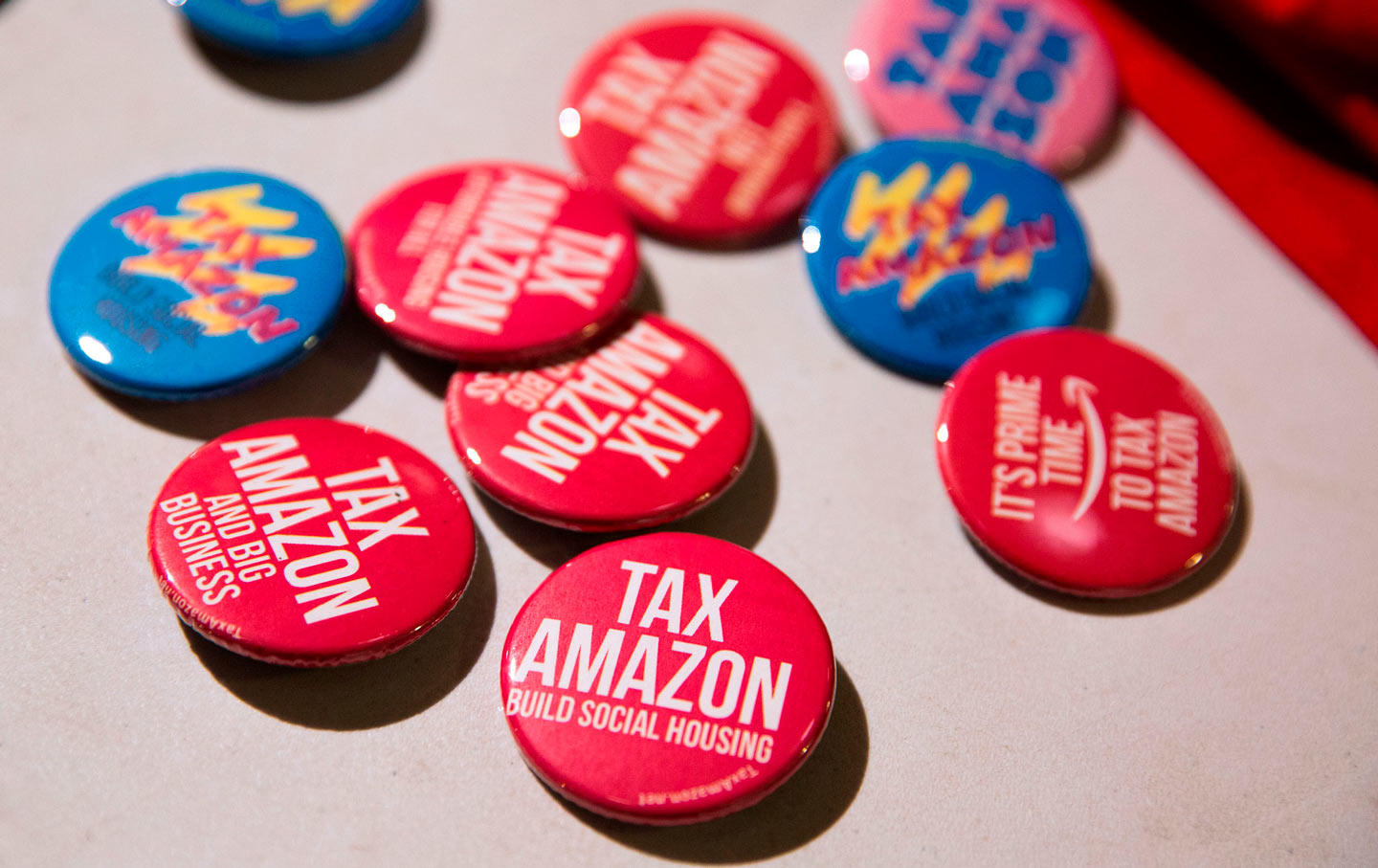 The grassroots Tax Amazon movement in Seattle is on the cusp of winning a historic victory against Jeff Bezos.

Last year, Amazon spent unprecedented corporate cash trying unsuccessfully to unseat the socialists who had led the way on a Seattle big-business tax in 2018 and before that on the $15 minimum wage. While Bezos’s bullying efforts were ultimately successful in forcing the 2018 Amazon Tax’s repeal, he was roundly defeated by our working-class campaign last year when he attempted to drive me and my socialist City Council office out of City Hall.

Fast forward six months, and now Amazon’s CEO and his billionaire friends are wishing they could call a do-over and have that modest 2018 tax back. Our movement is now poised to win a big business tax that is four times larger.

On July 1, the Seattle City Council voted 7-2 in its Budget Committee for an Amazon Tax that would raise more than $200 million annually. The tax will apply to the top 3 percent of corporations, with Amazon paying the largest share, and will go toward a major expansion of affordable housing in a city with sky-high rents and a long history of racist gentrification.

A Strong Step Toward an Antitrust Revival

The Amazon Tax is perhaps the most important progressive victory in Seattle since socialists and labor unions led the way on the $15 minimum wage movement in 2014, which passed first here and then was won in cities and states around the country. We hope that once again we can inspire working people and youth nationally and globally to spread this victory to other cities and regions. We will do everything in our power to assist in this crucial fight against the billionaire class that is attempting to force working people to pay for the current crisis of capitalism with massive budget cuts. Our rallying cry everywhere must be, ‘NO to austerity under this pandemic and recession! Tax big business, not working people!’

The Amazon Tax bill still needs final approval at Monday’s City Council session, where it will be voted on by the same nine Council members, and our movement will remain vigilant in fighting against every corporate loophole until the final hour. At present, the legislation has a veto-proof majority to override Seattle’s pro-corporate mayor, if needed. We are also continuing to go all out gathering signatures for our grassroots Tax Amazon ballot initiative through the Fourth of July weekend. At an upcoming Action Conference on July 8, after the final Council vote, our movement will democratically decide whether we’ve won a strong enough Amazon Tax to celebrate a victory, or if we wish to take our initiative to the November ballot. It’s the threat of our ballot initiative that has pressured the city establishment to act. We filed the ballot measure after a series of grassroots democratic “Action Conferences” where hundreds of people discussed and voted on the outlines of our initiative and strategy. In spite of the pandemic and lockdown, we were able to mobilize hundreds of people to gather signatures to get the initiative on the ballot—first online and then in person as we were able to return to safe face-to-face activity with social-distancing practices.

It’s no accident this victory comes in the midst of the historic Black Lives Matter rebellion. The legitimacy of the status quo has been utterly smashed by the protest movement, the pandemic, and the deepening crisis of capitalism. In Seattle, Tax Amazon was widely taken up at the Justice for George Floyd protests where we gathered 20,000 signatures in 20 days.

If, as expected, the Council does pass this legislation next Monday, July 6, there is still the real danger that big business files a referendum to repeal the Amazon Tax, as it did in 2018. If it does, our movement will go all out to defeat it.

We have not won everything we wanted in this struggle. The Democratic establishment, with entrenched ties to big business, unfortunately watered down our proposal in a number of ways, including cutting the total amount of the tax in half. But as I have seen again and again since I was first elected in 2013, what is won in the Seattle City Council is primarily based on the power of the movement outside City Hall. Our Tax Amazon movement was strong enough to defeat Jeff Bezos, but not all the corporate loopholes.

We must build on our momentum. The movement to Tax Amazon and big business to fund essential services like housing is needed everywhere. Here in Seattle, we will be immediately directing the energy of this historic victory toward the fight to defund the Seattle police by at least 50 percent—bloated budgets for police departments should face cuts, not education and vital community programs. The fight for Black liberation will also mean campaigning for elected community oversight boards with full powers over the police, including hiring and firing. We need democratic oversight to begin to root out police brutality.

We have faced a seemingly endless series of obstacles in this campaign: from the shameful attempts of corporate Democrats in the state legislature to pass a ban on municipal big business taxes, to unfounded delays in the City Council, to a pandemic and lockdown that prevented signature gathering, to relentless attacks in the corporate media in Seattle and nationally. We are winning because of the determination of workers and socialists to smash obstacles and find a path to victory.

For our fight we were clear-eyed about naming the real power pulling the strings: Amazon. Many argued that we should not “antagonize” big business and instead try to broker a deal, but we know that our power comes from the self-organization of the working class, not from negotiation with the elite. Don’t let anyone tell you in your fight to tax big business in your city that you’re being divisive, because class struggle is what gets the goods.