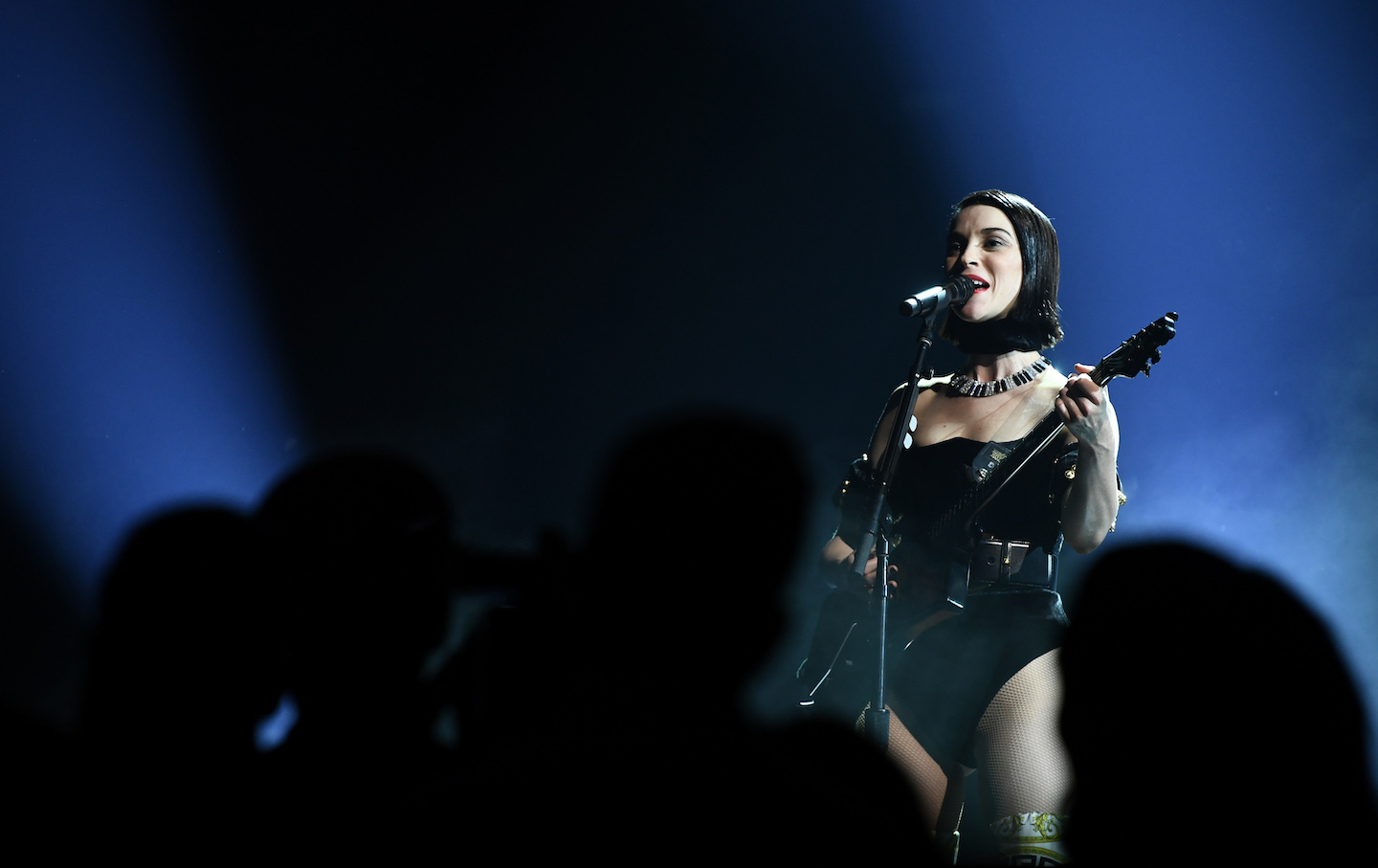 You can take the title of St. Vincent’s latest album, Daddy’s Home, at least two ways. You might think of the phrase in narrative terms, if you’re going by the album’s lyrics or the interviews granted around the project: Daddy is home. Richard Clark, father of St. Vincent (given name, Annie Clark) has come home from prison after serving nine years of a 12-year sentence for his involvement in a $43 million stock market scam. “Yeah, you did some time,” sings his daughter in a staccato squeak. “Well, I did some time, too.” Leaving the nature of her own atonement to the listener’s imagination, she drives home her close connection to her father, calling the two of them as “tight as a Bible with the pages stuck like glue.” Daddy has returned, St. Vincent reports, and having him back cements their closeness, though she doesn’t tell us why or how, at least not in the lines she sings.

Another way to take the title Daddy’s Home is as a descriptive phrase, identifying the place where St. Vincent’s father lives. Look, or listen, she seems to be saying: This is where he comes from, the world that made him who he is. By this understanding of its conception, the album is Annie Clark’s attempt to conjure the cultural sphere that shaped her father and ended up influencing her through the records he played when she was growing up. Her daddy was at home with the sound of 1970s pop, rock, and soul, and that’s what his daughter heard around the house. The place he came from went to her.

In 14 tracks, including three short musical interludes based on the sound of St. Vincent humming, Daddy’s Home is a scrapbook of aural images evoking the era of Jimmy Carter, Soul Train, and AM/FM radios good for toggling back and forth from “Sister Golden Hair” to excerpts from The Wall. To stir interest in the album earlier this year in advance of its release, St. Vincent posted a Spotify playlist of tracks that inspired her—“vinyl her dad had introduced her to…music made in sepia-toned downtown New York from 1971–1975,” in the words of explanatory text from her publicists. The songs on the list are a hodgepodge of pop hits and album cuts so random that they could only be the product of childhood memories: “Long Distance Runaround” by Yes, “Fascination” by David Bowie, “Court and Spark” by Joni Mitchell, “Cissy Strut” by the Meters, “Here You Come Again” by Dolly Parton. Little of the music on the playlist has much to do with downtown New York in the first half of the ’70s, and some of the records came before (“Cissy Strut”) or after (“Here You Come Again”) that period. But any difference between the historical facts and their meaning to St. Vincent only validates the playlist as a work of remembrance—and publicity. After all, memory, like PR, is more about refraction and reconstruction than archiving.

Every song on Daddy’s Home, with the exception of the bluntly ephemeral interludes, is a work of exactingly crafted pastiche and, simultaneously, something fresh and striking. “Live in a Dream” twirls and dips with the slow-motion, anti-gravity grace of Pink Floyd; “The Melting of the Sun,” with its yelping guitar, could be a Steve Miller B side; and “My Baby Wants a Baby” repurposes the opening words and Stepford Wife vapidity of Sheena Easton’s “Morning Train (Nine to Five)” for a song about domestic conflict and doubt. For all their effectiveness as allusions and memory triggers, though, the songs all hold their own, and then some, as original compositions. St. Vincent, always a songwriter with a knack for spinning catchy riffs, has become a melodist of considerable sophistication. There’s not a tune on Daddy’s Home that isn’t tuneful, including the interludes. If a record exec could take a time machine and bring these tracks back to the early ’70s, they’d hold up alongside the music of Bowie, Joni Mitchell, and Dolly Parton for their song craft and memorability.

The complicating factor is their elemental character as pastiche. The question is, how well can any work of mimicry compare to the work it’s mimicking?

The answer is: awfully well, I think, if emulation is the design strategy, rather than an excuse for a failure of invention, and if the artist is doing the emulating for expressive purpose, as St. Vincent clearly is with Daddy’s Home. To me, the album seems an act of repositioning, a resetting of the terms of her relationship with both her father and his musical influence. For Annie Clark to lay claim to the music of the ’70s—to show that she can make it every bit as well as the artists whose music defined her father—is a way of redefining his era as one she has mastered.

Too many musical allusions feel pushed into ironic territory for this music to be taken as simple homage. The sitar in the opening track, “Pay Your Way in Pain,” is a far too conspicuous call-back to the artificial music of exotica; the Mellotron on “Someone Like Me” and “Candy Darling” sounds too purposely arty; and the Wurlitzer on multiple tracks comes across as almost comically rinky-dink. There are not only winks throughout this album; there are snickers and an occasional stuck-out tongue.

Daddy’s Home is not the only album ever made by a gifted woman addressing her father through a reconsideration of his music. It follows the jazz singer Dee Dee Bridgewater’s blood-pumping tribute to the blues and R&B she was introduced to by her dad, the disk jockey Matt the Platter Cat, as well as Canciones de Mi Padre, Linda Ronstadt’s valentine to the Mexican folk songs she learned from her father as a child. While not the first of its kind, Daddy’s Home may be the gutsiest and the oddest conceptually.