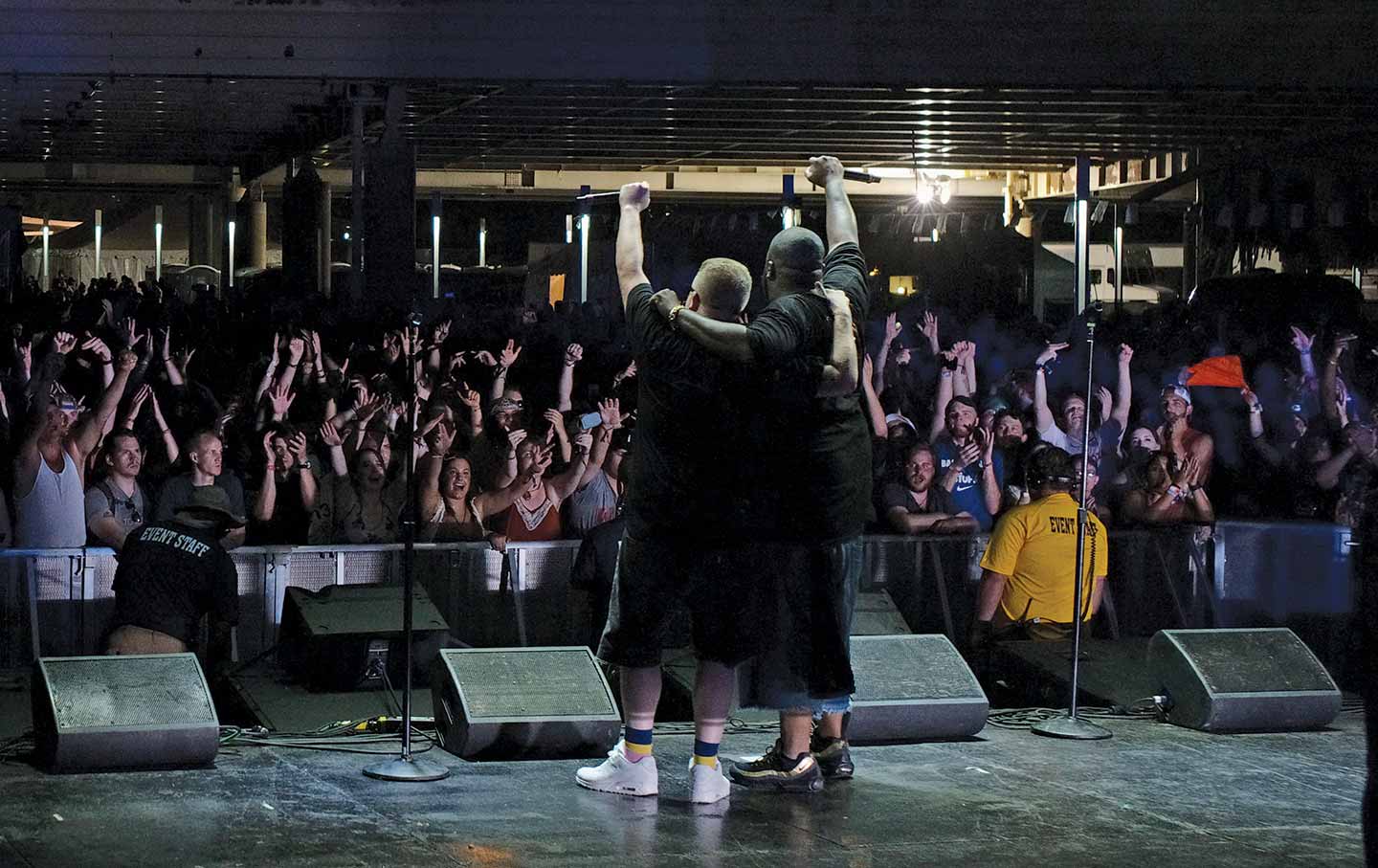 The previous Run the Jewels album Run the Jewels 3 arrived one month after Donald Trump was elected the 45th president of the United States. Atlanta’s Killer Mike and Brooklyn’s El-P echoed the horror and anger of many Americans shocked by the results of the 2016 election. The country felt raw, a powder keg of rage, anxiety, and fear brought on by Wall Street greed and the police killings of unarmed black people. Sensing an upheaval, Mike, an outspoken Trump detractor and Bernie Sanders surrogate, openly wondered when the revolution would arrive. On the song “2100” he rapped, “Nuclear’s too near / And the holders of the Molotov / Say that revolution’s right here, right now / And they ain’t callin’ off.” Indeed, Trump’s victory conjured the specter of full-scale revolt, the idea that this might be the breaking point. We all know the story of the last three years, though: Nothing happened.

Run the Jewels 4 finds the country on fire once again, yet the mood is somehow more urgent than it was in 2016. The coronavirus pandemic has halted the economy and killed more than 120,000 people in the United States. Over 40 million people are unemployed, and mandated social distancing has forced many into long periods of isolation. Then in May, a white Minneapolis police officer named Derek Chauvin knelt on the neck of George Floyd, an unarmed black man, killing him and setting off mass demonstrations. Protesters also wanted justice for Breonna Taylor, who was gunned down in her apartment by the police in Louisville, Ky.; for Ahmaud Arbery, who was harassed and fatally shot by two white men in Georgia as he jogged; and for the many other black Americans who have suffered at the hands of police brutality and violence. These uprisings felt different from protests in the past: In Minneapolis, rioters burned down the police department’s Third Precinct station house, where Chauvin worked.

The uprisings also took place in Mike’s hometown. In Atlanta, protesters vandalized the College Football Hall of Fame and Phipps Plaza, an upscale shopping center, among other landmarks. In years past, this seemingly would have pleased Mike. On “Close Your Eyes (and Count to Fuck),” from the stellar Run the Jewels 2, he urged fellow anarchists to kill the police, take over a prison, and waterboard the warden. Yet on the heels of the recent Atlanta incidents, Mike sounded a different note, passionate but measured. “I watched a white police officer assassinate a black man, and I know that tore your heart out,” he declared in a tearful, widely circulated speech. “It is your duty not to burn your own house down for anger with an enemy. It is your duty to fortify your own house so that you may be a house of refuge in times of organization. And now is the time to plot, plan, strategize, organize, and mobilize. It is time to beat up prosecutors you don’t like at the voting booth.”

He has a point, but for those who have followed Mike and Run the Jewels, that advice seems to contradict the scorched-earth tenor of his previous rhymes. What Run the Jewels 4 makes clear is that Mike and El are still gearing up for a fight and providing another soundtrack for rebellion—but with age, world-weariness, and introspection, they’ve begun to bare their souls to their listeners, too.

On “Walking in the Snow,” Mike breaks down what systemic racism feels like for black Americans, from the discrimination we face beginning in elementary school to the police brutality we endure as adults:

They promise education, but really they give you tests and scores.
And they predicting prison population by who scoring the lowest.
And usually the lowest scores the poorest, and they look like me.
And every day on the evening news they feed you fear for free.
And you so numb, you watch the cops choke out a man like me.
Until my voice goes from a shriek to whisper, “I can’t breathe.”

Mike also wags his finger at the armchair activists who rant about injustice on Twitter but don’t take any other action: “Truly the travesty / You’ve been robbed of your empathy / Replaced it with apathy.” Like the band’s previous albums, Run the Jewels 4 is turbulent, a rebel-rousing LP meant to scourge law enforcement, political leaders, and bootlicking yes-men. Though the vitriol of their older work remains, the new album feels more settled, even somewhat familiar. Producers El-P, Little Shalimar, and Wilder Zoby create dystopian electronic breakbeats for the rappers to stomp through, and for 39 minutes, they devastate everything in sight. Yet the déjà vu this album engenders is welcome at this moment. Whereas other mainstream rappers might create one song or one album dedicated to the unrest, Mike and El have carried that torch for six years. Once again, they’re urging us to wake up and keep fighting the system.

In an interview with The New York Times, Mike and El explained how Run the Jewels 4 was created after a much-needed break from the road, where the duo spent over a year and a half performing more than 100 shows in the United States and Europe. Reportedly, it was the first time they’d stopped working since they met nearly a decade ago, when El made all the beats for Mike’s breakthrough album, R.A.P. Music. El got married and took on a film scoring project, while Mike admitted that he was “mentally, spiritually, physically…fried.”

That might explain the self-reflection we hear on Run the Jewels 4. Historically, the rappers’ flows have been combative and outward-facing, but on Run the Jewels 4, especially on the concluding track, “A Few Words for the Firing Squad (Radiation),” they tend to look inward. El-P unpacks the anxiety he’s been suffering through: “I should’ve focused mostly on the heart / ‘Cause I’ve seen smarter people trample life like it’s an art.” Mike’s verses also capture him in a moment of introspection and might explain why he was cautious in his speech to the Atlanta protesters. Here he delves into a talk he had with his wife and how, as an outspoken famous black man, he now has to temper his desire to incite rebellion: “Friends tell her he could be another Malcolm, he could be another Martin / She told her partner, ‘I need a husband more than the world need another martyr.’” The lyrics show a side we hadn’t heard from Mike and El. Four albums in, they’re a little older and wiser and have more to lose.

Elsewhere on their new album, however, it’s business as usual. The song “JU$T” dissects capitalism and police brutality and features a defiant Pharrell, who chides “all these slave masters posing on your dollar.” Mike reduces Trump to a mere casino owner, and El scolds New York City police officers, calling them “murderous choke hold cops still earning a living.” On “Pulling the Pin,” which features soul music legend Mavis Staples and singer-songwriter Josh Homme, El sounds obstinate but somewhat jaded. He’s still pushing for change, but it can feel futile with the current administration still taking up space. Then Mike spits a rhyme that has rattled in my head since I first heard it: “Fuck the political. The mission is spiritual.” That says it all, really.

In times like these, when life can feel daunting and nothing prevails but anger, the line snapped me back to the true mission of the uprisings. This administration is, ultimately, finite; it’s time for America to fully acknowledge the centuries of terror the black people who built this country have faced. There’s never been a better time to destroy the system and the racists who maintain it.