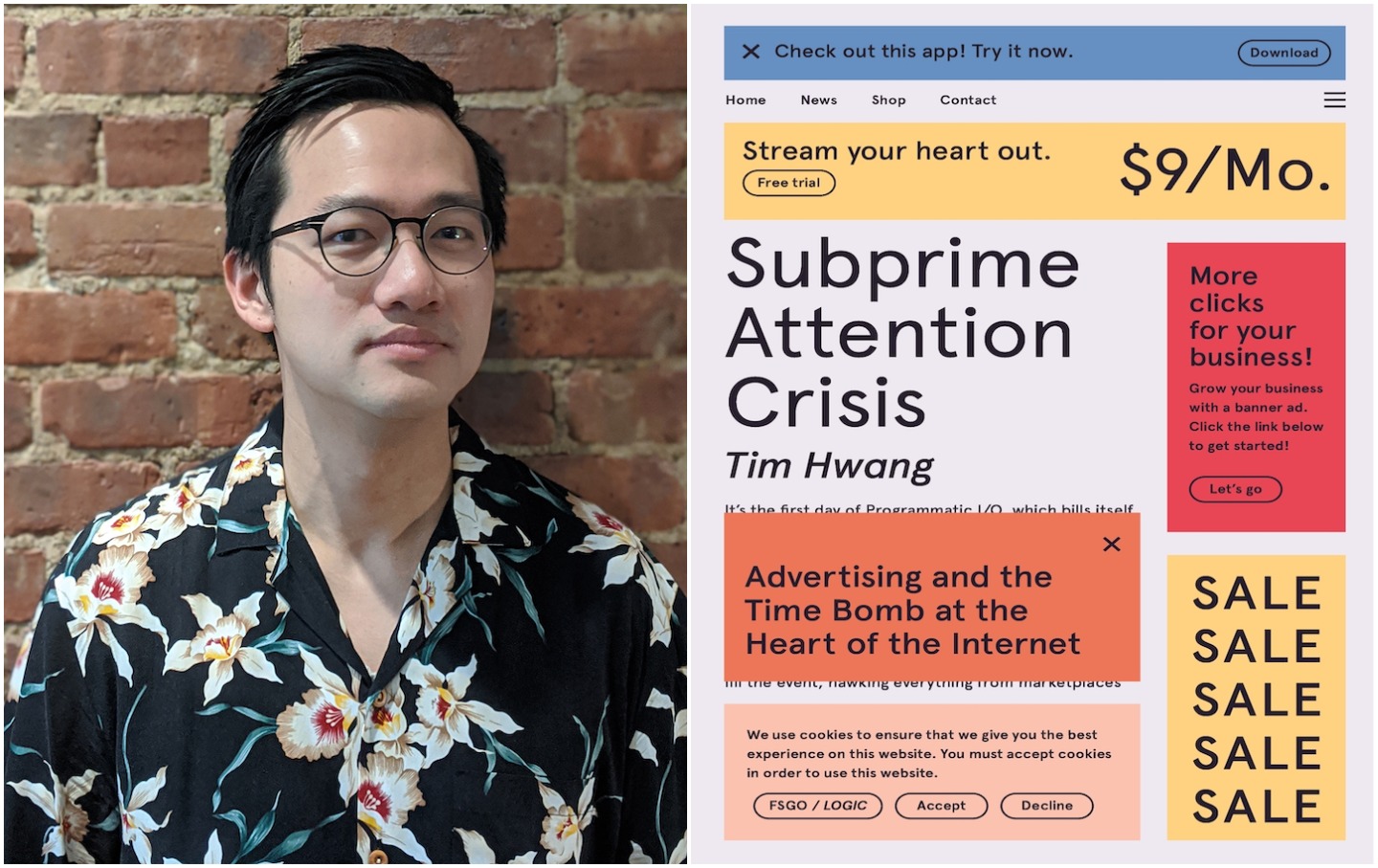 When you clicked on the link to this article, it triggered an automated bidding war for its advertising space. In a matter of milliseconds, an ad server loaded the auction’s winner: the ad you see right next to this text. Lately, mine have been for the online clothing retailer Kotn—I’ve been weighing whether or not to buy the same pair of pants for weeks now.

Most of us barely register the presence of ads anymore, or we use ad blockers to avoid them. But these pesky pop-ups and banners are the smallest units of a vast, opaque digital economy that could self-destruct at any moment. Programmatic advertising—the system by which most online ads are bought and sold—forms the foundation of the Internet as we know it, allowing us to do basic things like run a Google search for free or use Twitter without paying a subscription fee. But that foundation is a shaky one: Targeted advertising is often based on faulty consumer data (generated by a manipulative mass online surveillance apparatus), and most ads are never seen by human eyes. Those that are may not have any significant impact on advertisers’ sales. If enough people began to doubt the value of online ads, the whole thing would go bust.

In his new book, Subprime Attention Crisis, author Tim Hwang compares this precarious state of affairs to the one preceding the 2008 financial crisis. The good news, Hwang argues, is that we still have time to act: Instead of waiting for the bubble to burst, we might instead pop it ourselves so we can manage—and hopefully mitigate—the consequences.

Last month, I called Hwang at his home in Harlem to ask about the ways that we can safely implode the mechanism that underwrites the entire Web, as well as what kind of Internet we can make if we do. Our conversation has been edited for length and clarity.

arie olis: When did you start to notice the parallels between the programmatic advertising economy and the subprime mortgage crisis?

im wang: I spent a decade out in California before I came to New York. For a period of time I worked at Google and did public policy there, and then I worked in New York at Data & Society. So I’ve worked on both the data and corporate side of tech and its impact. I got really interested in trying to understand the infrastructure of the Internet and how it creates these huge companies with giant profit margins. The more I dug in, the more amazing it seemed to me that this is how we decided to fuel this huge economic engine. Around the same time I was also reading Too Big to Fail, Andrew Sorkin’s book on the financial crisis, and the two things started merging in my head.

MS: I don’t think most people think about programmatic advertising on a conscious level. How has it shaped our experience of the Internet? What sorts of things do we take for granted about how the Internet functions that are actually a direct result of the ad economy?

TH: Programmatic advertising is almost a way of seeing the entire Internet. You can look at almost every piece of the web and say, “How did programmatic advertising shape that?” For example, why do we have a like button for everything? The like button is this powerful mechanism for measuring engagement. These basic building blocks of the Internet are all informed in some way by these incentives to be able to measure and deliver and track a message to someone. So on one hand, you can think about advertising shaping those tiny things—the profile, the like button. But it also creates these more perverse incentives. The listicle was invented, in part, because it allows you to keep readers on the site for a long time. Metrics like that—time on site—become these big motivating factors for shaping content and mass behavior.

MS: Because the media industry relies so much on the ad economy, it becomes completely beholden to those metrics, even if they’re made up. I was part of the “pivot to video” media layoffs in 2017, the result of Facebook inflating its video metrics. To what extent do you think the precarity of programmatic advertising has contributed to the precarity of the media industry?

TH: Between Google and Facebook, you have a huge amount of the economy represented. That means everyone who flows through those pipes—journalists, publishers—are subject to the whims of those companies. If we assume that they’re not intentionally trying to destroy the media, those sorts of mistakes have enormous consequences that everyone has to live with. That Facebook example is such a good one. The distortion there wasn’t just a few percentage points here and there; they had overestimated the metrics by 60 to 80 percent.

Programmatic advertising is also interested in delivering a message to a sort of undifferentiated consumer. If you hop on a programmatic advertising market and say you want to target males 18 to 25, the program goes out and purchases those impressions. The result of that commodification of attention is that media becomes a commodity as well. One piece of content is the same as any other piece of content as long as it gets you the eyeballs you need. And because of consolidation, Facebook and Google benefit in the end—the casino always wins, and the players always lose.

MS: In the prologue of the book, you describe a talk you attended at a programmatic advertising conference where the speaker described many of these problems we’ve touched on. You were alarmed, yet almost everyone else in the audience seemed completely unfazed. Are people willfully ignoring the looming crisis?

TH: I would say there are three types of people in this industry. First, there are some people whom I would call true believers: They say the sorts of arguments I make in the book are just anecdotes. Those people really buy into the religion of programmatic advertising—it’s an article of faith that, with all of our technology, it’s impossible that online advertising doesn’t work.

Then there’s a group that has pretty perverse interests. I’ve spoken to some former programmatic advertising people who got out of the business because it’s all garbage from top to bottom. But they didn’t have the incentives to show anyone else that what they’re doing is a waste of money. Basically, they’re encouraged to look the other way and keep the wheels spinning as long as possible.

The third group of people say, “Oh, the ads work—I just can’t show you the data.” They insist they can’t tell me why I’m wrong. Part of my hope for the book is to get that third group to actually disclose those numbers.

MS: Do you think part of it is also a lack of imagination—and perhaps fear—about what the Internet would look like without programmatic advertising?

TH: I think so. People find it hard to believe that something so valuable and influential could, at its core, not really work. It’s sort of the great moral quandary of programmatic advertising. On one hand, it’s produced all of these problems that are now well-known and widely reported: It’s driven consolidation in the ad marketplace, it’s made media more brittle, and it’s set up a huge surveillance apparatus. On the other hand, it has also made services highly accessible to people. This, of course, is a tried-and-true Big Tech talking point. But if the model really broke down, that would be our most immediate experience—we would have to pay for all of this stuff on the Internet that we’re used to being free. If the transition is fast, if the bubble bursts, there’s a big human cost. A lot of content creators and publishers would have to shutter because they wouldn’t be able to afford to keep making content anymore. The impact wouldn’t just be contained to the tech industry.

MS: Which is why you advocate for a “controlled demolition” of the programmatic advertising bubble.

TH: If we see this problem in front of us, we have an opportunity to figure out how to deflate it in a way that doesn’t cause this sudden catastrophe. I don’t think anyone is saying there’s a single business model that will replace what we have. My hope is that you would see a wider diversity of models. The dominance of programmatic advertising has made it difficult to explore the alternatives. I don’t think it’s a surprise that during the Covid-induced media crisis you see things like [the worker-owned sports publication] Defector cropping up. I think it’s going to be mostly cooperatives like that who we see testing out these alternatives.

MS: Toward the end of the book you write, “We have been taught to interact with people by platforms built to buy and sell attention. One wonders if this will constrain the social possibilities of the future.” Reading that sent a chill down my spine. How do you think it has constrained our social possibilities?

TH: If you buy the idea that there’s something in the design of Twitter or Facebook that produces the emergent social behavior that happens on those platforms, then I think the fact that programmatic advertising is at the core of that design ends up being a really scary thing. Advertising gives rise to Twitter; Twitter gives rise to the behavior of a society that is really polarized and terrible. Part of my concern is that the directionality goes the other way, too—that these platforms have trained us to behave in a certain kind of way, such that even if there were an alternative platform that encouraged a different kind of interaction, it wouldn’t be appealing to us.

What starts with ads doesn’t end with ads. There’s basically a set of behaviors that we’ve learned that have been taught to us by the design of these platforms. But once we learn the behaviors, they live on their own. The technology doesn’t need to encourage them anymore; we do that ourselves.

MS: Assuming that we can unlearn some of those behaviors, is it possible that the Internet might be more fun in a post-programmatic-advertising world? I’m always complaining about how the Internet isn’t fun anymore.

TH: People talk about realizing the original dream of the web, which was going to be this purely academic cyberspace that was totally nonprofit and donation-driven and everything would be like Wikipedia. But I think there are a lot of problems with that model—late capitalism, for one. The conversation should really be about how we can build the Internet we want.

We might look back in 30 years and think, “Wasn’t it weird we had all of these huge public platforms where we could broadcast our thoughts to the world?” I try to be optimistic about it. Maybe things will be really cool in the future. We’ll just have to see.