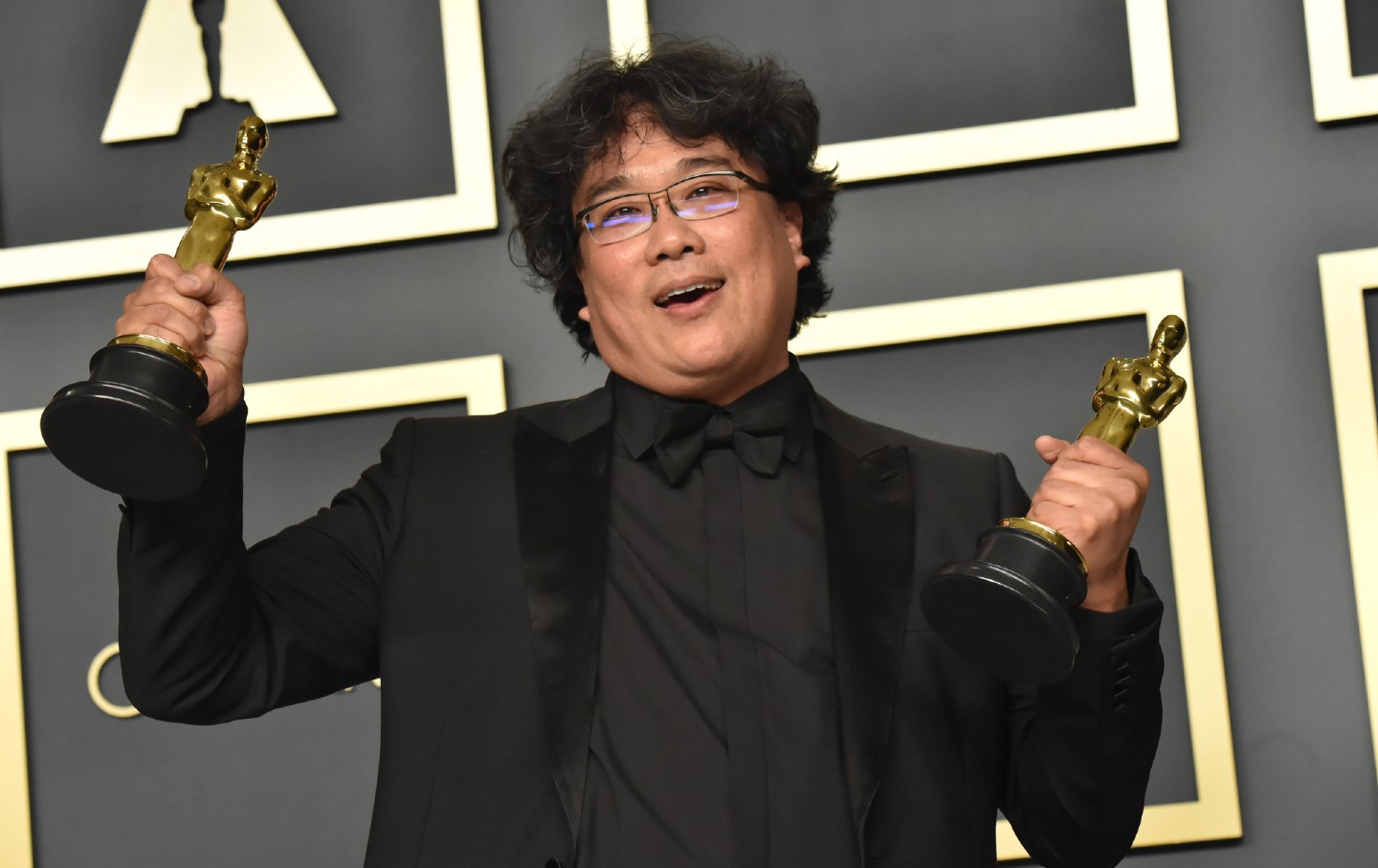 Parasite, the astonishing Korean film about the yawning gap between rich and poor in one of the most advanced economies in the world, made history Sunday night by sweeping the top Academy Awards for Best Picture, Best Director, and Best International Feature. Bong Joon-ho, its innovative director, also took the Oscar for Best Original Screenplay (with Han Jin-won).

“I’m very ready to drink tonight, until the next morning,” Bong declared in true Korean fashion after accepting his first award of the night for his screenplay. South Koreans are exuberant consumers of alcohol, a habit that makes for raucous social interactions but also reflects the anxieties and stress of a country divided by class and split along national lines.

But on this occasion, Bong’s desire to crack open a beer—or, more likely, a bottle of soju—was a cry of unmistakable joy. “We never write to represent our country, but this is very personal to South Korea,” he said while accepting his award for best screenplay.

The awards capped a remarkable night for Bong, who is now the leading light of the century-old Korean film industry. And it was a triumph for the incredible cast of actors—led by the beloved Song Kang-ho—who transformed Bong’s story of class conflict in high-tech South Korea into a remarkable window into the human condition in the 21st century.

Their recognition was doubly sweet because both Bong and Song had been among thousands of South Korean artists placed on a blacklist by previous authoritarian governments that banned them from receiving state funds.

The universal applause for Bong’s film and the rapturous reception from Hollywood’s elite left the director grasping for the right words in English after his huge win. “It’s really fucking crazy,” he remarked to reporters in the Oscar press room, clasping one of his statues. He shared the honor for Best Picture with his co-producer Kwak Sin-ae, the CEO of the film company Barunson E&A.

One of the most touching moments during the telecast came when Bong turned aside as his screenwriting partner, Han Jin-won, delivered his remarks. As Han spoke in Korean, Bong stared at his statue in awe, as if he was fully grasping his moment in the sun for the first time. Incredibly, Parasite beat out eight highly acclaimed films for Best Picture, including the British World War I masterpiece 1917, a heavy favorite in the run-up to awards night.

Parasite’s sweep is the first time that a film not made in the English language has won Hollywood’s most prestigious awards. It was the first Asian film to win an Oscar for best foreign film since Akira Kurosawa’s Rashomon opened the way in 1954. Bong was also the first Asian director to win the Oscar for directing since Taiwan’s Ang Lee won for Life of Pi in 2013.

“Ninety-two years of Oscar history were shattered Sunday night,” The New York Times proclaimed in its lead story. “In the entire history of the Academy Awards, no foreign-language film has ever taken home the best picture Oscar,” The Los Angeles Times noted. The Korea Herald, a major English-language daily in Seoul, proudly declared that Parasite had made “history in its home country and the international film scene.”

Meanwhile, thousands of South Korea’s plugged-in netizens came together on social media to celebrate their country’s recognition as a major film power as news of its award spread through Seoul. South Korean President Moon Jae-in also took note, saying that Parasite’s cast and crew had helped instill “pride and courage in our people as we come together to weather difficulties,” Reuters reported.

The enormity of Parasite’s sweep was apparent for all to see when Bong accepted his statue for best director shortly before Jane Fonda declared Parasite the film of the year. In a moving gesture of solidarity, he paid tribute to Martin Scorsese, whom—to Bong’s obvious and utter astonishment—he had beaten out for an award that the great director himself has won only once, for The Departed, in 2006.

“When I was young and studying cinema, there was a saying that I carved deep into my heart, which is ‘the most personal is the most creative,’” Bong said through his interpreter, Sharon Choi. “That quote is from Martin Scorsese. When I was in school, I studied [his] films. Just to be nominated was a huge honor.”

That sparked a standing ovation for Scorsese, who was nominated as best director for his work on The Irishman, his intense but historically questionable film about the mob’s assassination of Teamster leader Jimmy Hoffa (shockingly, Scorsese was completely snubbed by the Oscar crowd).

Bong, who came of age during the tumultuous 1980s in South Korea, also recognized Quentin Tarantino, the acclaimed director of Once Upon a Time… in Hollywood, who has never won for his directing. “When people in the US were not familiar with my films, Quentin always put my films on his list,” he said, eliciting a big grin and a peace sign from the director of such noir films as Reservoir Dogs and Pulp Fiction, which resemble Bong’s best work.

Over the years, Bong has produced an astonishing range of films that have pierced the soul of South Korea and exposed the underside of his country in the same loving way that Scorsese and Tarantino have done for America.

Among them are The Host, also starring Song, about a monster that emerges from Seoul’s Han River after US military scientists at an American base in Seoul secretly dump toxic substances into the city’s water system. More recently, Bong won wide acclaim for Okja, his take on a gentle “super-pig” that gets caught in the global food-processing system, and Snowpiercer, about the dangers of climate change.

Song Kang-ho, whom Bong pulled into a hard embrace while accepting his Best Picture Oscar, has also acted in numerous films that have exposed the hidden history of South Korea and its authoritarian past.

In 2017, he starred in the popular film A Taxi Driver, about an apolitical cabbie whose life is transformed when he takes a German photojournalist to the city of Gwangju as it is engulfed in the citizens’ uprising against military rule that shook the country in 1980 (that film was very personal for me, because I have written extensively about those events). Earlier, he won renown for The Drug King, a wild mixture of Breaking Bad and Scarface that dramatizes the “Made in Korea” meth trade to Japan during the 1970s, against the backdrop of Park Chung-hee’s collapsing dictatorship.

The success of Bong Joon-ho’s Parasite underscores South Korea’s rise as a film powerhouse, and it comes at a time when the country has become widely recognized for the universal appeal of K-pop, its homegrown music that, through such supergroups as BTS, has taken the world by storm. These national treasures make South Korea a leading force in shaping global culture, according to Tom Fowdy, a British journalist and commentator who writes extensively about China and the two Koreas.

“South Korea is really challenging the dominance of English culture and language in the arts on multiple fronts,” Fowdy tweeted on Sunday night as Bong’s awards were being announced. “Through music and film, the country has had some extraordinary achievements in recent years. This is what soft power success looks like.”

Asked to compare himself to Korea’s K-pop stars, Bong was typically self-effacing. “I think BTS has 3,000 times the power and influence I have,” he told a reporter. “I think Korea produces a lot of great artists because we are a very emotionally dynamic people.” For the delighted audience in Los Angeles and around the world, that was all too clear.